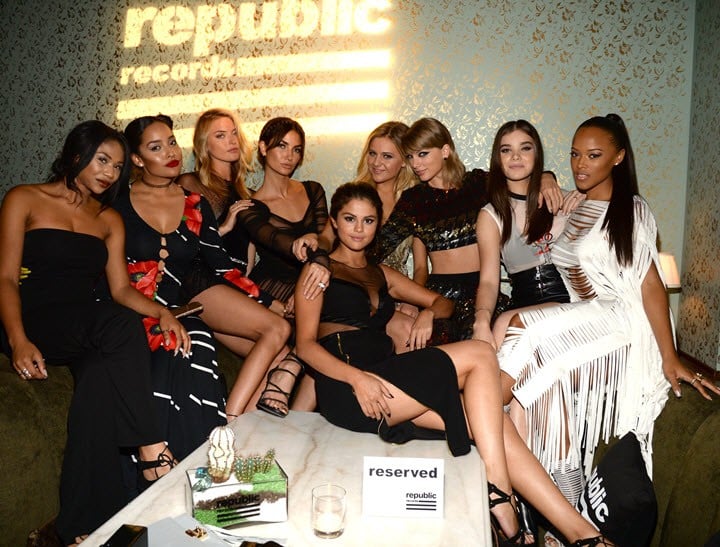 Last December, I was working on the weekend and my colleagues kept messaging me a picture and telling me that we needed to write about it. “IT’S THE INSTAGRAM PIC YOU WISH YOU WERE IN!”. In truth it was small and blurry and someone was wearing a mask that maybe was a poo?

My colleagues were right, of course. It was the biggest Instagram picture of the year. It was Taylor Swift’s 25th birthday and there were lots of celebrities there having a great time (Jay-Z, Beyonce, Sam Smith, Karlie Kloss, Emma Roberts, models, actors, performers. Justin Timberlake was under the poo mask).

I know who Taylor Swift is. I know how to Shake it Off. I like that she is tall. But that was my first real sense of Taylor Swift’s party posse. Her penchant for being photographed surrounded by other celebrities. And this was different than when Paris Hilton or Kim Kardashian did it because Taylor Swift’s celebrity friends seemed to be pretty happy to be there. They seemed to be having a good time. They seemed to like this 25 year old woman. Good for them.

Flash forward half a year and the images of Swift with her mates have become THE Taylor Swift story. While the use of the word “squad” to describe a group of friends has been around for decades, the phrase “#SquadGoals” is now synonymous with Swift and her celebrity pals.

Taylor Swift has a Girl Squad, filled with the best looking, coolest women around. A flick through her Instagram will show you how she rolls: She and her cool girl group are just hanging out being fun and carefree. At the MTV VMAs this year, she and her group sat at a table adorned with a sign that said “reserved”. The expressions on the faces of Taylor Swift and her friends scream exclusivity.

Her live shows around the world have been no different. There is a catwalk from the stage to the audience on which Taylor invites her pals to walk. Everyone from Heidi Klum to the American Women’s Soccer team to her cats (named after celebrities who now appear in her film clips) stride out to dance a little and be hugged.

Faces of other women from Swift’s Girl Squad flash up on the screen and say nice things about her: Selena Gomez, Karlie Kloss, Lena Dunham, the sisters of the band Haim.

The same goes for her music videos, which are a role call of 2015’s It Girls. The clip for Bad Blood was so celeb heavy that if the set had blown up, Hollywood would never have recovered. [You can read more about the politics of Bad Blood here]

Swift’s brand celebrates “the healing power of female friendship”, as the New York Times has put it. And Swift is clear: She IS here to make friends. At a recent performance, she spoke to the adoring crowd about her ‘rules for friendship’:

Of course, everyone in the audience does want to spend time with Swift and is happy to scream their nomination to be in the Girl Squad. Nobody seems to notice that she doesn’t mention a rule number 3: that you will have to be liked in return.

And while there is absolutely nothing WRONG with having beautiful, famous friends, there’s something increasingly uncomfortable about watching Taylor Swift parading them around in every public aspect of her life.

There’s something uncomfortable about the way that she appears to be hand-picking the people who can be in her club (Swift recently told veteran actors Sir Patrick Stewart and Sir Ian McKellan: “You two are ULTIMATE Squad Goals”).

There’s something uncomfortable about the girls in the squad congratulating each other on being clever enough to make a group like this. Swift girl squad member Lena Dunham has said of Swift: “I feel that Taylor has really taken control and said, ‘I’m going to get us all together in the same place, I’m gonna make it very clear that friendship is powerful, and women are magic, and if anybody thinks this is a witches’ coven, they might be right.’ She’s just made it her job in a very cool way.”

Taylor’s friendship is cool and powerful. Lena Dunham says so. Again, that discomfort creeps in.

Sure, watching Taylor Swift’s Girl Squad dominate does not upset anyone or make them angry, but it is disquieting.

Not alarming, but unsettling.

Or perhaps not. Maybe this whole thing isn’t uncomfortable for everyone.

Maybe it’s only uncomfortable for some people.

Maybe it’s only uncomfortable for the people who find this behaviour all too familiar.

Anyone who has ever been bullied by a group of girls or women has seen this behaviour before. There is a group and you’re either in it, or you’re out of it. More often than not, there’s a girl at the centre who decides who is in and who is out. She decides what is fun and what is boring; what is acceptable and what is not.

Invariably, she looks a particular way. She tends to have it going on the conventional sense. The girls or women around her love her style and strive to copy it.

When you know this feeling, when you watch it playing out, you see Taylor Swift’s Girl Squad not as an inclusive friendship group, but as a gang. A gang to which you don’t belong, but which you desperately wish you did. As Megan Garber said in The Atlantic, “It’s not just a group, but a group that is powerful and meaningful in its very groupiness.”

Not everyone will feel this way when they look at Taylor Swift’s girl squad. But some people will. There is a secret language of people who have been bullied. Behaviours that are familiar. Signs and signals that only you pick up. Subtle hints that trigger something inside you that you thought had been put away years ago.

This isn’t Taylor’s fault that she is beautiful and popular. But she does nothing to democratise her “squad”.
At a recent stop on her 1989 World Tour she called down to her fans from the runway, “If you’re feeling down about yourself, don’t look at Instagram… Instagram is nothing but a highlight reel.”

But what she could more accurately have said is: “If you’re feeling down about yourself, don’t look at my Instagram.” Yes, Instagram is a curated space where we show the best of our lives, but if Swift knows how influential her social media profile is, then it would take very little to show both sides of her life. The good and the bad. The loved-up and the lonely.

Hanna Krasnova of Humboldt University in Berlin has studied the effects of Instagram and she told Slate: “You get more explicit and implicit cues of people being happy, rich, and successful from a photo than from a status update. A photo can very powerfully provoke immediate social comparison, and that can trigger feelings of inferiority.”

There is something about Taylor Swift’s girl squad that seems to feed this feeling of inferiority. It feels exclusive, not inclusive. Her comments about Nicki Minaj last week underline that sense that ‘you’re either with us, or you’re against us’; ‘you’re either in or you’re out’.

If you missed it, Minaj complained that the American VMA awards tended to go to the same kind of people – and not black women who influence pop culture so much. She tweeted, “If your video celebrates women with very thin bodies, you’ll be nominated for vid of the year”. Swift, who was nominated for Video of the Year responded saying: “I’ve done nothing but love & support you. It’s unlike you to pit women against each other. Maybe one of the men took your slot.”

Minaj responded saying that she wasn’t targeting Swift. After 24 hours, Swift retracted and apologised. Minaj’s comment wasn’t a criticism, but even if it was, she had been censured.

Again, our bulling baggage overlays our reading of this. Swift had been nice to Minaj, so Minaj could not criticise her. It was a statement about control. Minaj was out of control and Swift had to pull her back in.

For some reason, Minaj had to walk on eggshells, so as not to anger Swift. Remember rule of friendship #1? “You have to like me.” But that is ridiculous. There is nothing feminist about insisting that women should not criticise other women. That’s as sexist as saying women are not allowed to spit or swear. This isn’t about feminism or solidarity. It is about control.

There are many women who may look at this Taylor Swift scenario and feel nothing.

But there are some women who will look at it and say: “I know this scenario. I know it and I hate it.” A tightness in the jaw, a nudge in your stomach. You know this. You have seen it before.

The people who know this are our squad. That’s the secret language that we share.

For a glimpse into Taylor’s curated life, see more here:

Very interesting blog. Here's my 2 cents. I have no idea if Taylor's girls squad is publicity or they are her actual real friends. I tend to think it is publicity, otherwise why is there a need for all the photos and sharing the photos with the public? On the other hand, it definitely is an exclusive club of pretty girls. It just reminds me too much of the pretty, popular girls in high school who you desperately wanted to be a part of, but you were excluded because you weren't pretty enough to be part of the group. Unfortunately, this contributes the most to a girl's self-esteem. From what I've read, Taylor was bullied and unpopular in high school. This may be a way of getting back to the bullies. Proving to them that I'm now the popular girl with beautiful friends. I think Taylor is the type of girl who likes to get even with people who have wronged her. Taylor has some issues she needs to resolve. Hopefully, with age comes a level of maturity.

"This may be a way of getting back to the bullies. Proving to them that I'm now the popular girl with beautiful friends. I think Taylor is the type of girl who likes to get even with people who have wronged her." --> AGREED. She looks smug in every one of her #squadgoals photos, as though she's challenging the people who have wronged her in her life. Someone needs to move past high school.

Stumbled upon this while doing a little research for a post about Woman Squads and Granny Squads, and I invite you to check it out. FYI: It's rated R for language, mild violence and occasional nudity.