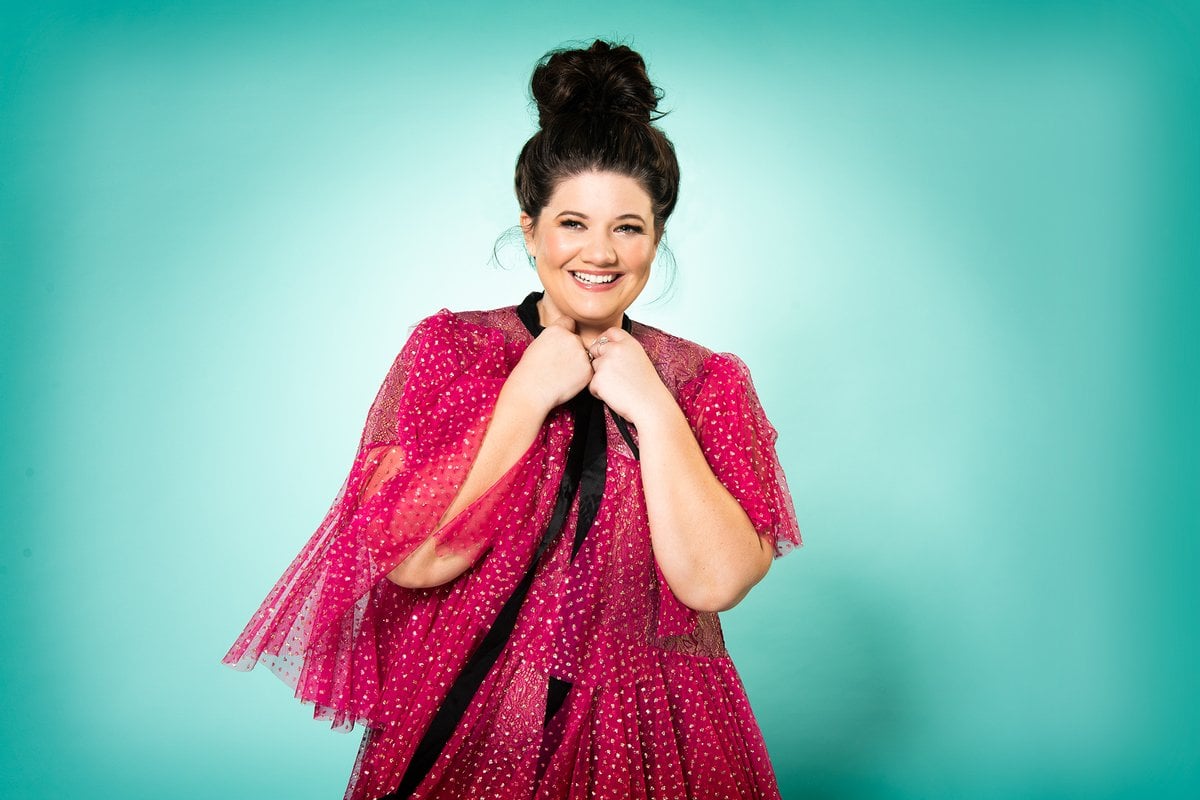 Tanya Hennessy is in the middle of planning for her wedding and it's fair to say she's not really... enjoying the process.

"I was literally on some f***ing website trying to figure out how the f**k you send a wedding invitation now. I'm like, do you email it, is there a website for that? Do I hand write it? Where do I get stationary from?" Hennessy says, hilariously. She and her partner of six years, Thomas Poole, were engaged last year.

"All the things are really romantic too, really old-school. The writing is like, 'We do, Tanya and Tom'... None of this suits Tom or I! Tom plays the drums. And I'm a maniac full-time. We want to have neon and more festival energy.

"F**k those! I hate organising it. It's the worst thing ever. I'm just gonna elope in a backyard because I hate it so much. Wedding s**t is f***ing awful. I won't hear a word of positivity about wedding planning. There's nothing fun in it.

"It's not for me. I don't enjoy it. What the f**k? It's so much pressure. You don't know what to pick. I don't know. What am I gonna wear? I don't care. But then like society says I should care. Anyway, I'm very overwhelmed and I don't think we'll do it. You might see a 2027 wedding for me."

That's the thing about Hennessy - she won't hold back on what she really thinks and she's often funny while doing it.

That doesn't mean she hasn't got a serious side or serious things to say. Last year the multi-hyphenate opened up about her struggles with fertility, and how she and Poole were having trouble conceiving even though they had been trying for a while.

"I think so many people are in that situation where they're just feeling like... you know, millennials live in the hustle culture and then all of a sudden it's 'Oh shoot, we're almost 40," Hennessy, who is 35, says.

"I have endometriosis. I have really bad endometriosis, which I only found out about in August last year... it's pretty aggressive. It's everywhere. I've actually got it in my bladder, which is fun. So basically, I've got to get that endometriosis out, which is happening on the 10th of May.

"And then it'll be a couple of months and then we can try naturally again, or we'll have to go down the IVF path. And then if that doesn't work, I'll steal a baby from Coles."

While she's not opposed to adopting or fostering a child, she would really love the experience of being pregnant.

"Tom and I just have so much love to give and it's not really going anywhere at the minute so hopefully after this surgery, we can place that love with a baby."

Watch Tanya Hennessy on The Project where she talks about her fertility struggles. Post continues after video.

So, have the couple agreed on a baby name yet?

In lieu of a baby (for now), Hennessy admits she "gave birth" to her wildly successful kids' book, Drum Roll Please, It's Stevie Louise, last year. Originally pitched as a picture book, she was told by her publisher the book was too advanced and too long for three to five-year-olds. So it became a junior fiction book instead and thus, the Stevie Louise series was born.

The story follows 12-year-old Stevie Louise Mason - not Steven, mind you, even though everyone tends to call her that, much to her dismay - an entrepreneur and entertainer who loves musicals, reading, and English. She lives in regional Australia. She's strong, assertive, and funny. She wears multi-coloured, mismatched socks.

"One thing I noticed while reading contemporary junior fiction is there are not a lot of female protagonists who are just interested in being ambitious," the author says. "There are little love stories, and the protagonists are interested in partners and boyfriends and girlfriends, and I was like, 'I don't subscribe to that'. When I was a kid, I didn't want that.

"I wanted to tell a complex girl story. Stevie is a bit anxious, she's perplexed. She's just an interesting kid that wants more than one thing. She wants a lot. And she’s just got a lot to say. I wanted to tell that story. I kind of told the story I would have liked to have heard if I was a kid."

Evidently, so did a lot of people - both children and parents alike. When the book came out last year, over 400 children dressed up as Stevie Louise for Book Week, which delighted Hennessy to no end.

And she is carving out her own unique space in the genre.

"We have some excellent male writers dominating the junior fiction space, like David Walliams and Andy Griffiths. They're great. But no matter how much a man writes a woman's character, they'll never understand what it is to be a 12-year-old girl," Hennessy says.

"Because the nuances and the minutiae of that age is so specific. And I remember the conflict that you have with other girls, and not even conflict but just internal feelings of like, 'Do I want to be in this group?' It's such an interesting time that I felt like it needed to be written by a woman, and someone who believed that experience.

"And I grew up in Newcastle. I've lived in Canberra, Toowoomba, Griffith, Bathurst... And it's a different lifestyle when you live in the regions and I really wanted to make sure that was being respected."

Hennessy has now written the second book in the series, titled Spotlight Please, It's Stevie Louise. The focus of the new book is on Stevie's best friend, Alex, who is gay.

"I've always been surrounded by gay people. When I was a little kid, my nan used to get her hair done by a drag queen," she says. "This is in Newcastle. I was four or five. She would sit looking at the mirror, I would sit like looking at her, but looking back at this man who had fake eyelashes and fake nails and was male presenting but had some feminine qualities.

"I went to a performing arts school. All the kids, particularly the males, were very feminine, very extra, very over the top, very funny and silly. Not all of them; I don't want to stereotype. And I just was like, 'Where are the books that tell the story of what I looked like when I was a kid?' And all those kids are 30 years old now and I still feel like we're not seeing those people.

Authenticity is important to children because they are one of the most discerning audiences. Hennessy is well aware of this fact.

"Obviously, you're across details in books, but you have to be particularly across details [as a kids' fiction writer]. If you forget one tiny detail, the kids are like, 'No, no, because in the first one, there was a black cat. And it was this old, and it was moving in this way...'" Hennessy laughs.

"And they ask questions. They never say, 'I liked the book'. They'll say, 'Page five, there was a bit with a sloth. And I like sloths. You should have put it in the book later. And you should put more sloths in.' They're very specific.

"I think the cool thing about Stevie is that kids have read it multiple times. And there's so many great messages about resilience. And I guess the overall message is like nonconformity and being yourself... It's not about the amount of times you fail, it's how many times you get back up."

Spotlight Please, It's Stevie Louise by Tanya Hennessy is published Allen and Unwin and is available from today (May 3).