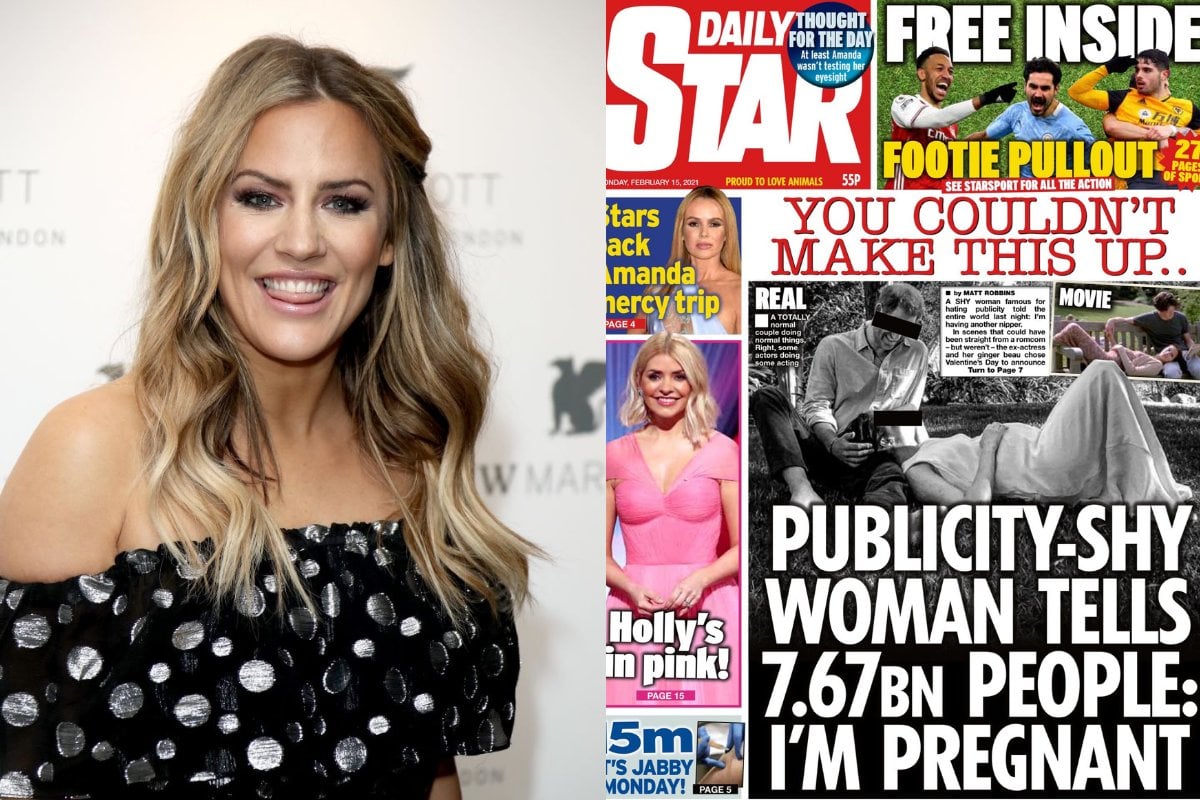 It’s been one year since UK Love Island host Caroline Flack felt she couldn’t take any more of the media attacks on her. One year since she took her own life, at her home, at the age of 40.

One year since the British tabloids quietly deleted some of the nastiest stories they’d written about her. One year since her fans flooded social media with her plea: “Be kind”. One year since a petition was started for Caroline’s Law, to make bullying and harassment by the media a criminal offence.

And yet we have learned nothing.

Yesterday, on the anniversary of Caroline’s death, Meghan Markle announced her pregnancy, with a gorgeous black-and-white photo of herself and Prince Harry. It’s an emotional time for the couple, who suffered a miscarriage last year.

Like Caroline, Meghan has been open about the impact that constant media attacks have had on her mental health, describing it as “almost unsurvivable”.

Meanwhile, in the Daily Mail, Piers Morgan called Meghan and Harry “a right royal pair of shameless hypocrites”, claiming they didn’t have any real desire for privacy.

“In fact, it's quite clear that the pair of them crave attention and publicity like ravenous jackals gorging on the carcass of a freshly slain gazelle,” he added.

In the comments section, thousands of readers, taking their cue from Morgan, joined the pile-on, heaping insults on Meghan and Harry, calling them a “toxic couple”, “low IQ narcissists” and a “vomit-inducing pair of hypocrites”.

Of course it’s wrong to assume that a single factor has led to a suicide. But an inquest into Caroline’s death made the connection clear.

Caroline had been charged with assaulting her boyfriend, Lewis Burton, even though he didn’t support the assault charge. Tabloid headlines included “Caroline Smack”, “Flack Sack and Whack for ITV” and “Flack’s Bedroom Bloodbath”.

In an Instagram post Caroline never published, she said that she and her boyfriend had had an argument and “an accident” happened.

“The truth has been taken out of my hands and used as entertainment,” she wrote.

Caroline knew what lay ahead for her, having already “accepted shame and toxic opinions on my life for over 10 years and yet told myself it's all part of my job”.

Coroner Mary Hassell laid out her findings at the inquest into Caroline’s death.

"I find the reason for her taking her life was she now knew she was being prosecuted for certainty, and she knew she would face the media, press, publicity – it would all come down upon her,” she said.

Two months before she died, Caroline told her Instagram followers, “In a world where you can be anything, be kind.”

The tabloids chose not to be kind. They chose to come up with clever but cruel headlines, and then delete them after Caroline had died. And enough of us read those tabloids for them to keep doing it.

Yesterday, Lewis Burton posted a tribute to Caroline on Instagram.

"I will never forget you," he wrote.

Let’s not forget Caroline, and her message that we can be anything, but we should choose to be kind.

Reply
Upvote
1 upvotes
"Be kind" isn't the same as "say nothing but nice things about me". It's simply unrealistic to live your life in the public eye and to control the narrative to the point that people only express positive things about you. Furthermore, it implies you are somehow above reproach or negative feedback. You can't conflate all negative press as malicious and "bullying" - in a lot of cases, negative press or criticism is warranted.

Reply
Upvote
1 upvotes
But Meghan and Harry need publicity in order to attract lucrative deals, only they want to be able to control social media reaction which is not possible.