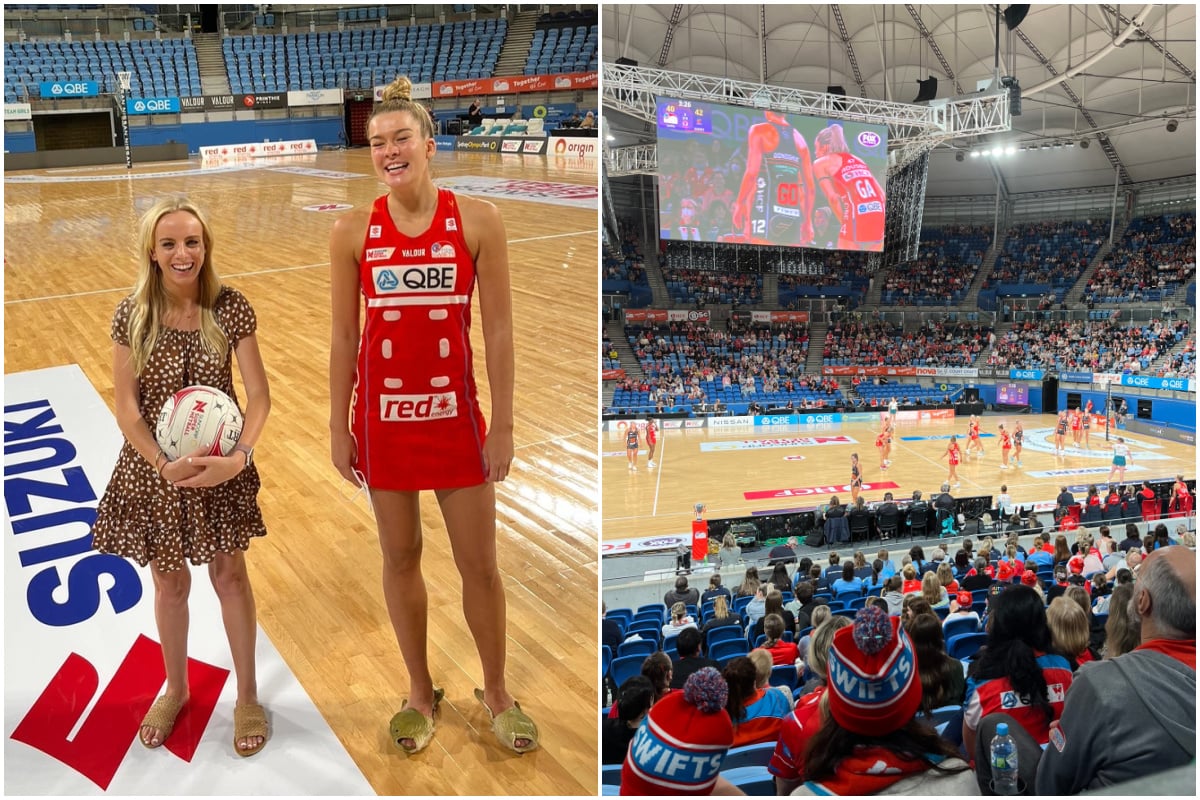 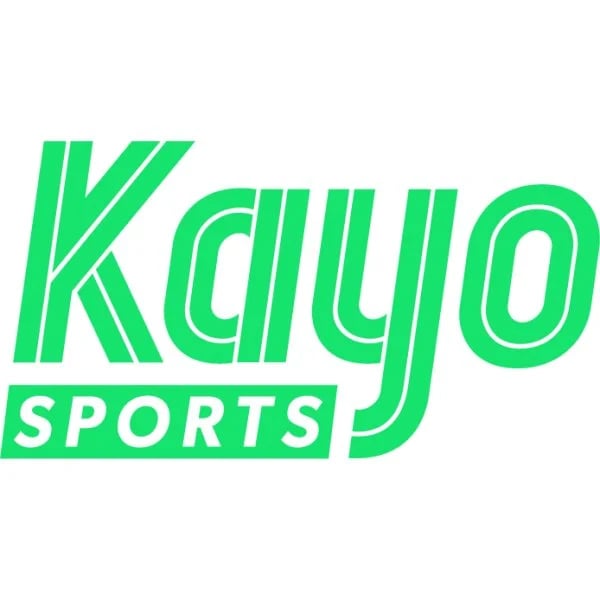 Thanks to our brand partner, Kayo

It’s a weekend afternoon in the year 2000 and I’m buzzing. I’m in my peddle pushers, Etnies, and a Supre top, with my hair slicked back in a ponytail. If someone were to ask me what my hobbies were, I’d answer pretty quickly: reading, MSN messenger, and netball.

Am I good at netball? Dear Lord, no. I’m so… short. I play Wing Attack but it’s a miracle if I catch more than one centre pass. I’m slow on my feet and not aggressive enough to compete with other people for the ball. They can have it, it’s honestly fine. But today is special because after my mediocre game this morning — where we’re yet to score a goal this season — I get to watch the professionals play. Women like Liz Ellis and Sharelle McMahon.

I’m going to the netball with my mum and sister, and we're going for the Sydney Swifts — who have since become the NSW Swifts.

For the entirety of the game, I'm in awe. The athleticism. The focus. The pace. The fitness. The accuracy. At times it feels like a completely different sport to what I play, and I can't take my eyes off it. 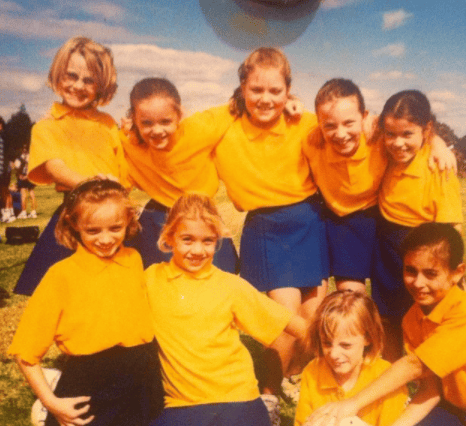 A very young Clare (second from the right) with my netball team. Image: Supplied.

Fast forward two decades, and I'm on my way to the netball again. A lot has changed — the name of the competition, the names of the teams, all the players — but one thing is familiar: the feeling. I'm with my partner and a group of friends from work, and it's Round 1 of the 2022 season.

We're watching what is coincidentally a 2021 grand final rematch — the NSW Swifts vs the GIANTS, and after two premiership wins in 2019 and 2021, the Swifts are the team to beat.

Suncorp Super Netball isn't traditional netball. The league has introduced features like the Suncorp Super Shot, the Power 5, rolling subs and time outs to bring a new dynamic feel to the game, and it works. I knew from watching games on TV that with five minutes to go in each quarter, goal attacks and goal shooters are given the opportunity to score two goals by shooting from a 1.9 metre designated zone within the goal circle. It's fresh and exciting and blends the traditional game with a new element of risk and reward.

As the game begins, we're excited to see some of the big names play directly in front of us. Players like internationally renowned NSW Swifts shooter Helen Housby, who seems not to miss. And defensive duo Sarah Klau and Maddy Turner, who put enviable pressure on their opponents. On the GIANTS side, Sophie Dwyer's shooting accuracy is astounding, and strong mid-court players like Amy Parmenter and Jamie-Lee Price wear the opposition down with their relentless consistency.

Over the course of the game, ultimately won by the GIANTS, here's what I notice.

The quality of the athletes

These are women at the top of their game. The moment they walk out onto the court, their fitness, strength and height is unmissable.

The game is high-scoring and close, with players making incredible shots, stunning intercepts and strategic plays that testify to the high-level of training they're involved in.

One of the GIANTS' many goals. Image: Supplied.

When NSW Swifts star shooter Sam Wallace is suddenly out with an injury, the team shuffles and surfaces even more talent.

These are players who are fast, strong, confident and resilient, and who show what female athletes are capable of.

Playing competitive netball isn't for the fainthearted. That's why I was never very good. You need to be willing to put yourself on the line to pursue the ball, even if it means colliding with another player, falling on the court, or risking injury.

The game involves hard rotational movements, pivoting and acceleration and deceleration force changes, and there's a reason so many netballers end up with ACL injuries.

But that makes it thrilling to watch.

The players bring everything to the court, and want to win at all costs. There's no room for being timid or shy, or fading into the background. When you're on the court, you're full throttle. You don't give up, and you push your body (and that of your opponent) to the absolute brink of what it can withstand.

The energy in the arena

At half time, as the camera is panning to kids in the audience who are dancing to Taylor Swift while holding their Swifts or GIANTS signs, I turn to my partner and say: okay. There's only one word to describe this entire spectacle, and it's wholesome.

That might seem counterintuitive given the intense competition playing out on the court, but netball has a distinctly different feel to other sports. The audience consists of families, particularly young girls, and there's none of the disturbing culture that can come with watching other live games.

At half time, there's a shooting competition between two girls, who are beyond excited to win merchandise for their favourite team. The cheer squad (which includes one young boy who can do some very impressive acrobatics) captivates everyone's attention, and audience members are interviewed throughout to share who they're going for.

It's clear there are spectators who are superfans of particular players, and those players smile and wave whenever they have the opportunity. There is no ego or arrogance or tension in this arena. We're all here for the same reason, and beyond impressed with the game we came to see.

I often feel like the term 'role model' is overused, but for some reason during this game, I can't help associating it with the players on the court.

I remember looking up to professional netballers as a kid, and enthusiastically learning about their lives outside of netball. I cared what they were studying and what they were passionate about, and what kind of person they were when they took off their bib.

NSW Swifts defender Sarah Klau lives with Type 1 diabetes, but hasn't let that stop her playing netball at a national and international level. She didn't let her diagnosis — which she learnt during her elite career — limit her ambitions.

GIANTS midcourt star Amy Parmenter lost her mum to cancer in 2013 and started The Tie Dye Project, which raises funds to support children with cancer.

These are women who study at university or work rigorous jobs while pursuing their athletic careers, who support causes greater than themselves, who have overcome adversity and still reached peak performance.

There are no 'scandals' in netball, because the players are there for the right reasons. And that reality is obvious to every spectator.

But you don't have to be in the arena to enjoy Suncorp's Super Netball in 2022. This year, Kayo subscribers can watch every game of every round live on Kayo. All Sunday games are live and free on Kayo Freebies, and every new subscriber gets a 14 day free trial. It's the perfect way to enjoy the brilliance of the game from home.

While my netball 'career' didn't pan out the way I'd hoped when I was growing up, there's nothing like seeing some of the best players in the world compete in a thrilling, ambitious and ever-evolving competition.