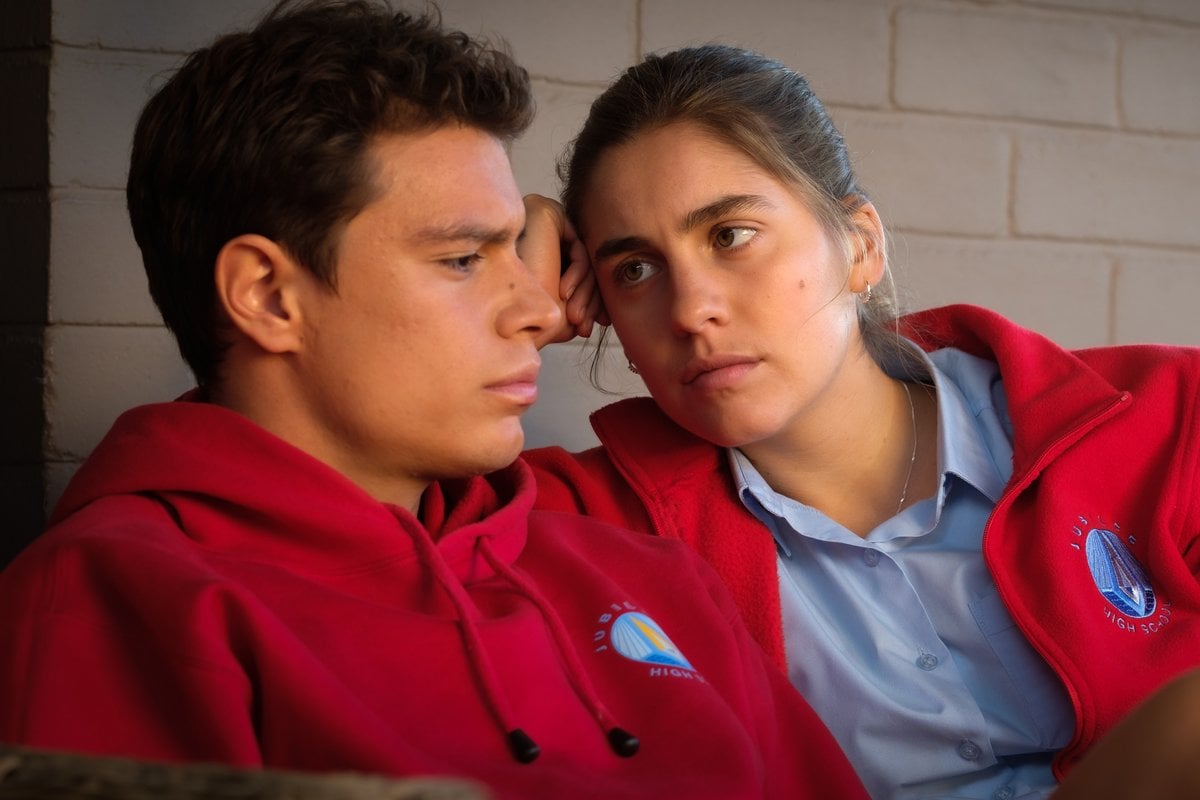 After a year-long wait, the Stan Original Series Bump is finally returning to our screens.

The second season of the popular series, which premieres on Stan on Boxing Day, will reunite Australia's favourite family for a whole new story.

The first season of Bump introduced us to Olympia 'Oly' Chalmers (Nathalie Morris), a high-achieving 16-year-old who has her entire life mapped out in front of her when she suddenly has a surprise baby.

Watch the trailer for season two of Stan's Bump below. Post continues after video.

After feeling unwell at school, Oly has a baby in the back of an ambulance on the way to the hospital, and immediately becomes a mother, while her parents Angie (Claudia Karvan) and Dom (Angus Sampson) become instant grandparents.

Angie and Dom, who were on the brink of separation before the baby arrived, are forced to come together to help Oly as she cares for her newborn daughter while jugging the pressures of high school.

The arrival of the baby also brings Santiago 'Santi' Hernandez (Carlos Sanson Jr) and the rest of the Hernandez family into the Chalmers-Davis family's life, as the two families, from different backgrounds, attempt to figure out how to adjust to their new normal.

After premiering in late 2020, Bump quickly gained a legion of fans, breaking Stan's record for the biggest ever premiere.

For series creators Kelsey Munro and Claudia Karvan, it was a happy surprise.

"I’m always surprised [when a show] resonates like that," Claudia Karvan told Mamamia.

"But the positive response was so swift, it was really overwhelming. It was a big surprise, a very happy surprise."

Now, one year later, Bump is back for a second season. 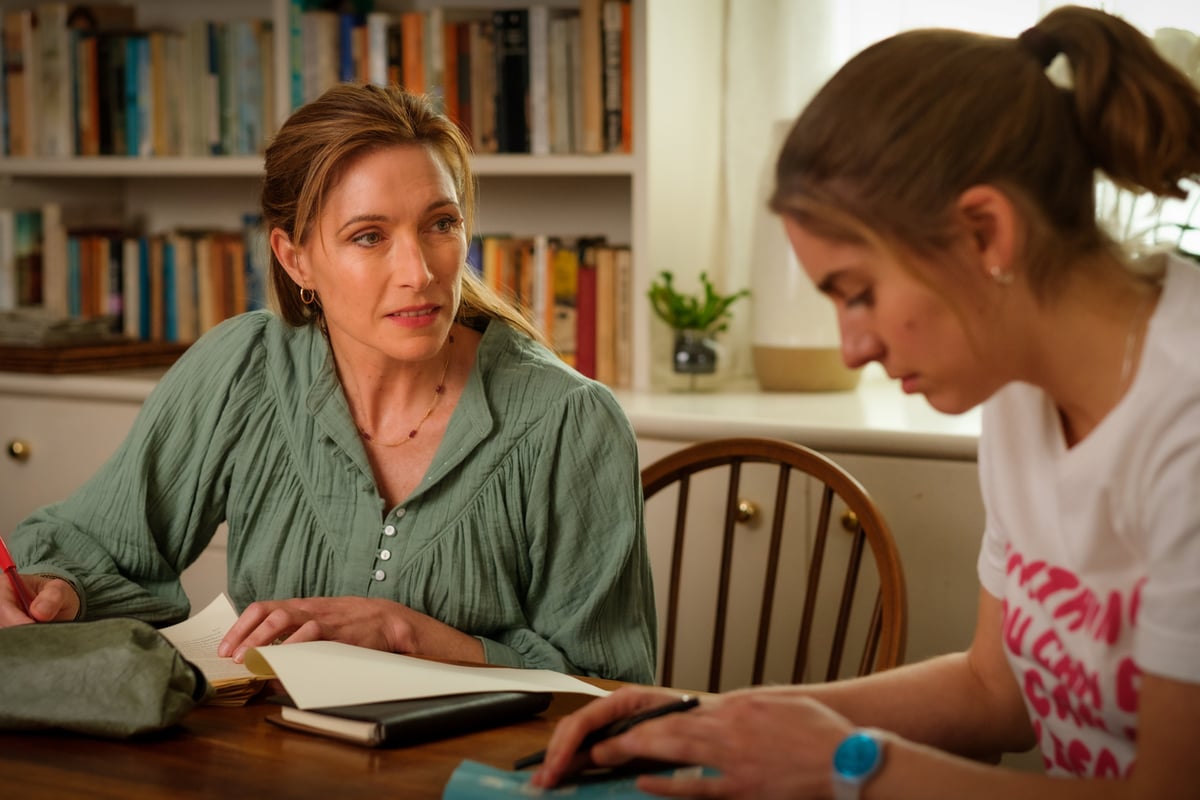 Filmed amid New South Wales' second lockdown, the new season will follow Oly and Santi as they continue to get to know each other, while juggling the demands of school, work, and parenting.

As their school friends navigate their own experiences at home and school, Oly and Santi soon realise just how alienating being a young parent can be.

As for the rest of the cast, the series will also follow the chaotic lives of the Chalmers-Davis and Hernandez families.

While Oly's parents Angie and Dom continue to deal with the fallout of their separation, Santi's father Matias (Ricardo Scheihing Vasquez) and step-mother Rosa (Paula Garcia) attempt to get back on track with their own complicated relationship.

Speaking to Mamamia, Nathalie Morris, who plays Oly, shared what it was like working on a TV series in the middle of Sydney's long lockdown.

"Every day felt like a big accomplishment," she shared.

"I think it’s amazing what the crew did to get the show completed in the same amount of time with so many more restrictions. There were so many more protocols, which makes it difficult, and ideally we wouldn’t be filming in these circumstances," she added.

"We also weren't able to spend time with each other outside of filming, which I think is difficult, because I feel like that’s where you form those sorts of bonds and the chemistry that appears on screen."

As the release date for the new season approaches, Morris hopes viewers will form a connection to the show's story and characters, just like they did in season one.

"I think a lot of people connected to the story and the characters and I just hope that we continue to take the show in a way for people that continues to be meaningful and continues to add value," she shared.

"I think the show will continue to be relevant, continue to push boundaries, or push people into thinking in ways that are new for them. I think season one did that, so I hope season two does that too."

As for what to expect from the new season, Morris said it will go in "many, many, many different directions".

"All the characters that we’ve met in season one, [we get to see] their stories grow," she said.

"We see Oly and Santi navigate new parenting challenges, and we see them navigate their relationship... and what it means to be a family."

Carlos Sanson Jr, who plays Santi in the series, added that fans can look forward to learning more about the show's supporting characters.

"What’s beautiful about this season is that we get to explore all these other characters as well that we lightly touched on or introduced in season one," he told Mamamia. 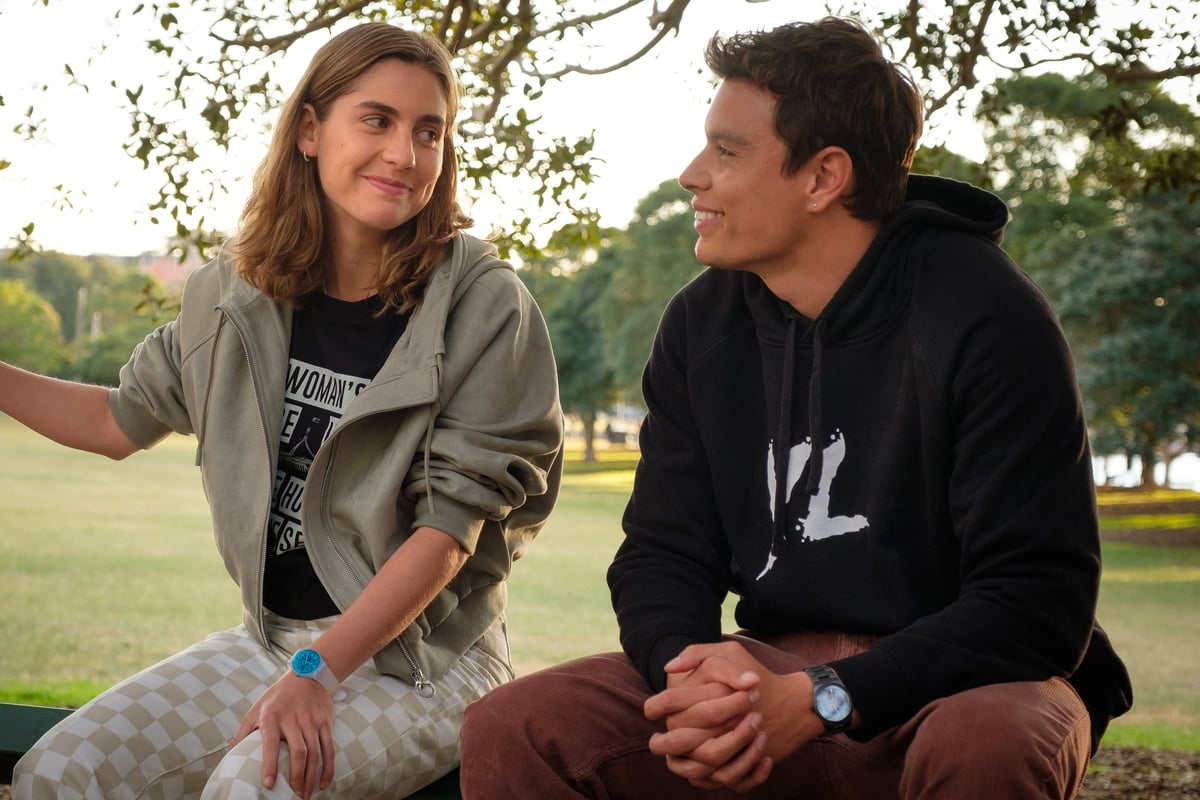 Karvan agreed, adding: "This is a whole new series, and it’s expanded to include more about the characters and a deepening of all of their relationships, particularly between Santi and Oly, and how they cope as parents, and maintaining their relationship, and dealing with FOMO, and exploring intimacy.

"There’s a lot of conflict to navigate between the two families because of the transgression between the families. A lot of exploration of the physical inconveniences of being very, very young parents with a baby, juggling school and love and an education.

"We cover a lot of ground. We sort of dug deep into the world and into the characters."

Every episode of the Stan Original Series Bump will premiere on Boxing Day, only on Stan.