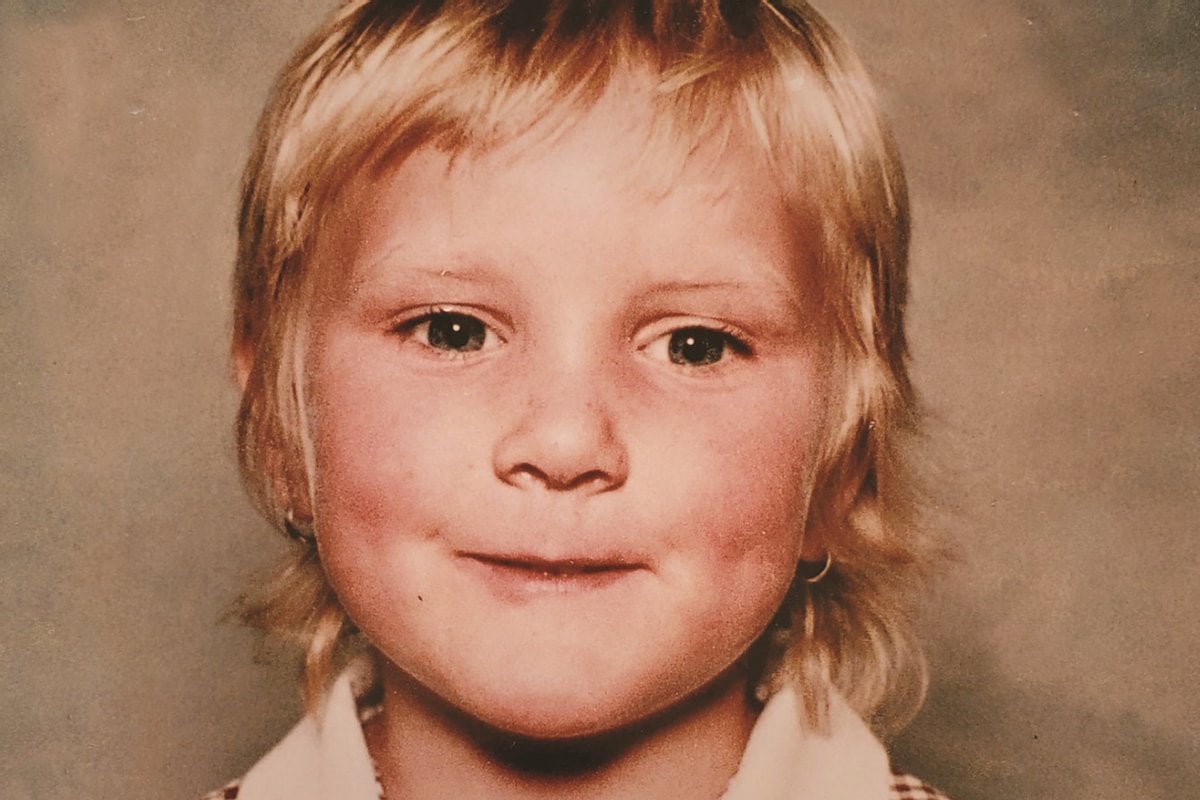 Warning: This post discusses sexual assault and violence and may cause distress for some readers.

When Sherele Moody was 19 her stepfather Barry Gordon Hadlow picked her up from the local bus stop in the Queensland town of Roma on an afternoon in May, 1990.

Little did she know mere hours earlier he'd raped and murdered a nine-year-old girl, after picking her up on the side of the road as she walked to school.

Sherele remembers his agitated, somewhat hyper behaviour as he drove her back to the family home.

"He kept on waffling on about this little girl that had gone missing and how he was going to help search for her. That's what I distinctly remember. The next day he got up really early and put his SES volunteer uniform on and went off and joined the search for her," Sherele told Mamamia.

It took three days to find Stacey-Ann Tracy's tiny body against a tree and near a dry creek-bed in heavy bushland just outside Roma.

When Sherele opened the family door to see detectives holding a warrant, and about 30 uniformed officers ready and waiting in her yard, she remembers feeling numb.

"Nothing prepares you for that. I remember feeling like I was stuck in a cloud of fog and I couldn't see clearly," she recalled. 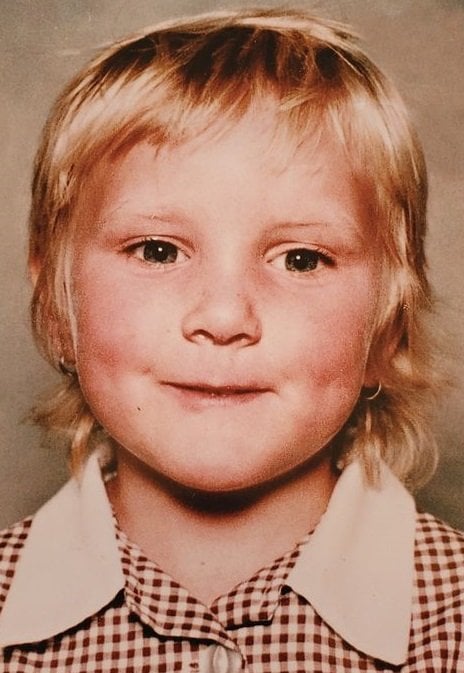 But not only did she have to come to terms with Hadlow being charged with Stacey-Ann's rape and death, the police delivered another shocking blow.

"They took my statement and they told me they were charging him. I was in shock...but that's when they told me about the murder of Sandra," she told Mamamia.

In 1962 Hadlow had raped and murdered five-year-old Townsville girl Sandra Bacon after tricking her into coming inside his home by offering her some books.

He placed her body in a corn sack in the boot of his car and left her there, once again joining the community's search for the little girl.

He served 23 years in jail for murder, and not long after he was released in 1985 he met and married Sherele's mother. 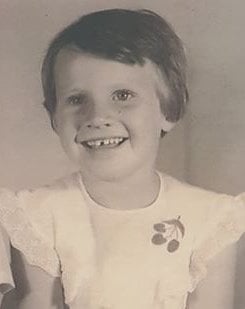 Sandra Bacon died at the hands of Hadlow in 1962. Image: Supplied/Sherele Moody.

To make matters worse, Sherele's mother had known about his crime, but the pair had told the family he'd been locked up for manslaughter, and that he'd killed a man during a fight.

"She knew, but they didn't tell any of my family. We didn't have reason not to believe [their story], and back then you couldn't Google something and find out," said Sherele, who was 15 when Hadlow entered her life.

He was creepy and heartless. But as she told Mamamia, she'd grown up being abused by her mother and living in and out of foster care, so cruelty wasn't new in Sherele's world.

To the outside world, Hadlow was a prominent member of the small Queensland community. He worked at the town's Woolies and toy shop, founded the local dart competition and was a seemingly passionate volunteer.

But once the shock wore off for Sherele, his crimes "made total sense" to her.

"It wasn't hard to see that as a natural progression of his character." 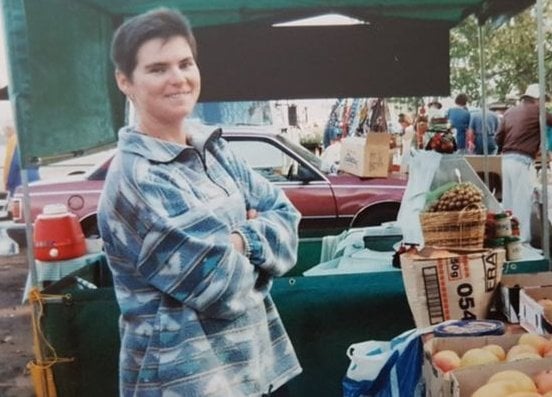 While Sherele became a witness for the Crown, and attended Stacey-Ann's funeral, her mother defended her husband in court, and stayed with him long after his conviction.

Sherele hasn't seen her since she was 20. She remembers "disconnecting" from her mother aged 12, but after the court case she severed ties completely.

She has, however, stayed in touch with the family of Stacey-Ann who have shown her nothing but kindness in the decades since.

Sherele went on to become a journalist, determined to help change the way the media reported on crime after witnessing a glorification of violence in her stepfather's case.

For the past five years Sherele, now 49, has been tracking every known Australian woman and child killed as a result of murder, manslaughter or neglect from white settlement to now.

"We know the statistics and we know there are a plethora of organisations who put the data out there, but what they don't put out are the stories," she told Mamamia.

"I know when Stacey-Ann's family dies, her memory will die with them. I didn't want that to happen. This is my way of repaying them [for the kindness they've shown me]."

"Behind each of the over 2,200 hearts listed on the memorial, small for children and large for women, is a system that has failed females and The RED HEART Campaign is calling on you to join its mission to create awareness of the enormity of the issue and need for more complex support systems – for victims and loved ones left behind," she told Mamamia.

Through her research, Sherele has come to realise a sobering truth.

"You can read an article from the 1950s and the 1980s and 2020, and a lot of the same topics are being touched on - especially in the area of family violence. For me the frustrating thing is I've read so many old newspapers and trawled through so many archives and read so many stories, and unfortunately the underlying drivers and the misconceptions around violence against women and children and gendered violence are exactly the same today as they were 100 years ago."

It's why Sherele has committed to updating the memorial for as long as she is able, spending tireless hours tracking deaths and court cases and memorialising the stories of lost women and children.

Her stepfather died in prison in 2007.

It's a fact that brings her comfort, knowing he will never have the chance to be released again. But she hates that he didn't suffer like his victims.

"He had a roof over his head the whole time, he received hospital care, and his death was relatively peaceful. There's a part of myself that wished he had lived to a very old age so that at least he would have been looking at the inside of a cell for the rest of his life as punishment."

But Sherele refuses to spend much of her energy on Hadlow and the killers like him. She is instead fiercely dedicated to the stories of the victims and the devastated families their killers leave behind.

"It's sad that a government organisation isn't doing [what I am doing], but it is what it is, so someone has to do it. I am happy to because I can't replace Sandra or Stacey-Ann. I can't change their stories.

"But I can make a difference for their families and other families, and hopefully in time this project will be used to highlight deaths of women and children, to improve reporting, and also to further the community conversation so we can get to a point where we start to see an end to the epidemic of death," she told Mamamia.

You can view The RED HEART campaign's online memorial here, and support this project here.