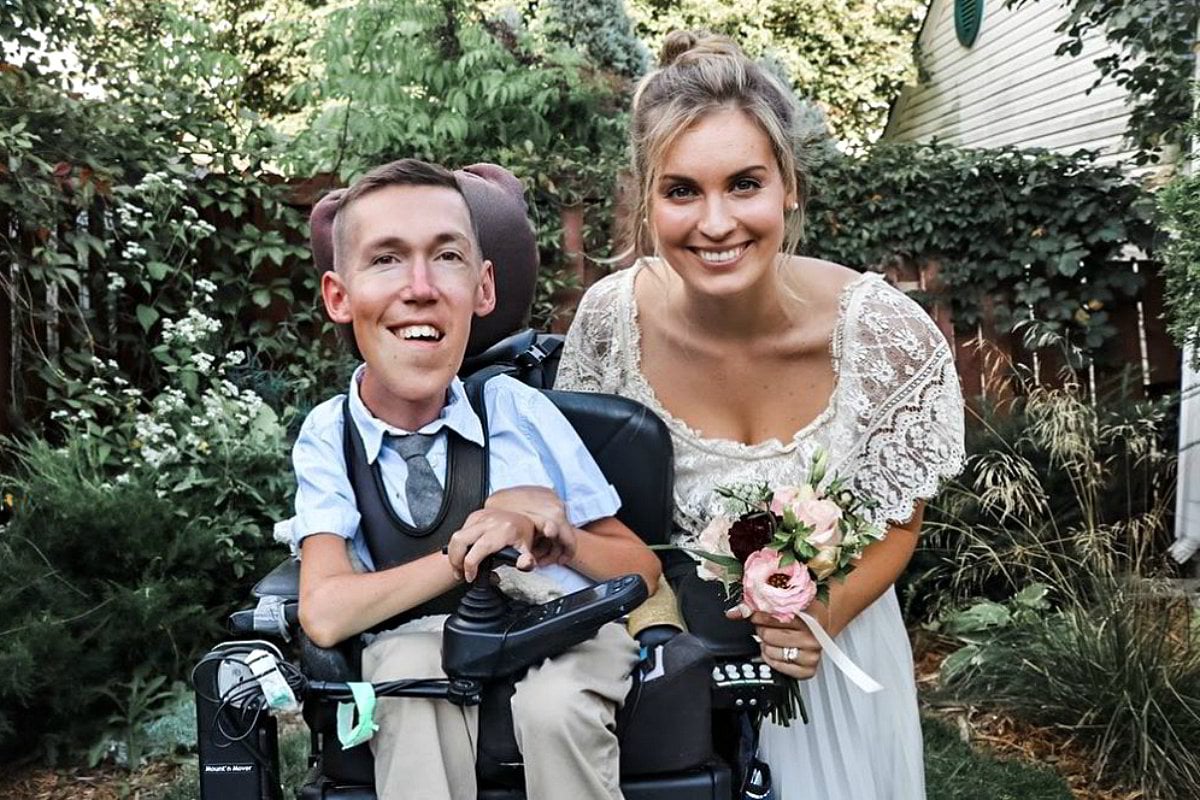 Last week, Hannah Burcaw posted pictures to Instagram of herself alongside her new husband, Shane, her partner of almost five years.

"On Friday, September 4th, I married the love of my life. It wasn’t the big gathering we had always planned on having, but it was perfect," the Minnesota woman captioned the photograph.

"I’m incredibly lucky to now be married to the greatest guy I know."

But among the thousands of comments of congratulations, were ones like these:

"Why everybody is happy for that? Is not normal! [sic]"

Watch: Shane and Hannah on why they started their YouTube channel.

Video via Squirmy and Grubs/YouTube.

"You are way to [sic] beautiful to be with a guy that you have to take care of. You should be taken care of and provided [for]. You will never have a normal family like that. What about kids?"

"﻿So how much are you 2 making as social media Influemcers [sic]? In the millions, I’m sure. Gee, I wonder if that has anything to do with this marriage? It’s shameful to exploit disability just to make a buck."

Shane Burcaw lives with Muscular Atrophy Type 2, a condition that causes the muscles to deteriorate over time. He received his first wheelchair at age two and has limited mobility. Hannah is his primary caregiver.

Together they have a YouTube channel, Squirmy and Grubs, in which they document their daily lives in order to improve understanding about his disability and normalise inter-abled relationships.

But posting to her Instagram in the wake of the negative comments on their wedding photos, Hannah acknowledged that they "will never be able to educate everyone".﻿

"A few years ago, reading words like these was painful. For a while, I held onto the idea that once Shane and I were married, all the people doubting our relationship would realise it was real. Now, of course, I’m not that naïve," she wrote.

"﻿Although it’s taken time, I’m able to completely dismiss people like this. Shane and I continue to make content and share our story with the hopes of showing as many people as we can that disabled people are worthy partners."

If the past two years of having a YouTube channel have taught me anything, it’s that you’re never going to be able to educate everyone. No matter what you do, some people will just never come around. Worrying about these people’s opinions is a waste of time, and as time has gone on, it’s become so much easier to genuinely have no internal reaction to comments like these. A few years ago, reading words like these was painful. For a while, I held onto the idea that once Shane and I were married, all the people doubting our relationship would realize it was real. Now, of course, I’m not that naive. Although it’s taken time, I’m able to completely dismiss people like this. Shane and I continue to make content and share our story with the hopes of showing as many people as we can that disabled people are worthy partners. Comments like these only encourage us to continue! We’re so grateful for all of the people that our story has managed to reach in a positive way.

A moment of late-night courage brought Shane and Hannah together.

In an interview with Special Books by Special Kids in 2018, she shared that she'd first seen Shane, then 23, in a YouTube video about his daily life.

"I watched it, and I clicked a link to his blog, and I read that for like three hours, and by then it was nearly midnight," she said. "I emailed him an introduced myself, and he emailed back the next morning with his phone number."

They started dating in 2016, and throughout their relationship, they've had to deal with stares, ignorant comments, and moments of misunderstanding from strangers.

During their first date, a person at the restaurant approached their table and prayed over Shane. Many others have expressed shock when they've learned that Hannah is not his nurse and that she's not his first romantic partner. They also often describe Hannah as "remarkable" and "inspirational" for being with him. Commenters on their videos have also insisted Shane must be a millionaire, or that she's exploiting him and his disability for profit (the couple do sponsored videos and have ads on their channel).

To some, it's apparently that unbelievable that an able-bodied person would fall in love with a person with a disability, that they would want to marry them, make plans to have a family with them.

Yes, the way in which Shane and Hannah go about their day may look different and may present more unique challenges, but beyond that, their relationship is no different to most others.﻿

"She helps me poop," Shane quipped to SBSK, "but otherwise we're just a regular couple that has fun, and gets into arguments, and figures out life together."

Reply
Upvote
Congratulations Shane and Hannah! I wish you so much happiness. I'm sorry that people judge because one of you has a disability. It's sad, and unfortunately it will take society a long time to get used to the plethora of relationships that exist on earth.
notmyplanet 10 days ago

Reply
Upvote
I worked with disabled people as a carer for my first 15 years of employment until a major knee injury and I can say the people I cared for gave more back than I gave to them. If you really want to see true love look no further than the compassion and respect held between a person and someone they help daily. Only ignorant people belittle the gift of happiness that the disabled give to other people around them. These cruel comments must come from some form of jealousy.
News
General
Opinion
True Crime
Politics
Sport
Explainer
Entertainment
Celebrity
Reality TV
Movies
TV
Books
Rogue
Royal
Lifestyle
Beauty
Fashion
Weddings
Home
Wellness
Health
Fitness
Travel
Food
Parents
Before The Bump
Pregnancy
Baby
Kids
Teens
School
Parent Opinion
Work & Money
Money
Finance
Career
Lady Startup
Relationships
Sex
Dating
Separation
Friendship
Family
Real Life
Couples