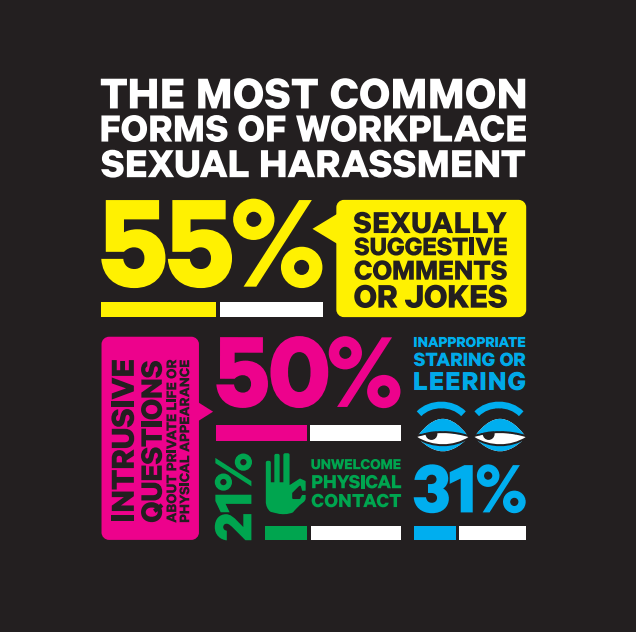 A handful of my friends experienced the seedy side of working life while in their early 20s.

One was unexpectedly kissed by her boss, a senior employer of a large international company. She actually kicked him in the shin to escape the situation. Another had her breasts groped while at after-work drinks in front of her colleagues. Though the incidents occurred years apart, they had something in common. Like four out of five Australian who are sexually harassed at work, neither of these women reported the behaviour.

Sexual harassment – defined as unwelcome sexual conduct that makes a reasonable person feel humiliated, intimidated or offended – is still rife in workplaces across the country, despite it being outlawed 30 years ago.

According to the Australian Human Rights Commission, one in five Australians have experienced sexual harassment in the workplace. That’s equivalent to the combined populations of South Australia, Western Australia and Tasmania. And 25 per cent of women have experienced workplace sexual harassment in the past five years (these women would fill the MCG 20 times over). But only 20 per cent of victims make a formal report for a multitude of reasons.

Not only is sexual harassment in the workplace rife and stressful, it can also be very confusing.

Research indicates that many people do not know what behaviours constitute sexual harassment and, even if they do, they don’t report it because they don’t think it is serious enough, are afraid of repercussions in the workplace, or feel pressured not to “dob” or to “take a joke”.

1. The inappropriate behaviour happened at informal after-work drinks at a bar, so it wasn’t sexual harassment at work.

“Well this can depend on circumstances. If the after work function is arranged or condoned by management (perhaps a manager has even put money on the bar), then this could be viewed as an extension of the work environment, which is covered by the sexual harassment laws,” Ms Jenkins said.

2. I wasn’t groped or touched – it was just a comment – so it’s not serious enough to complain about.

“Sexual harassment is not just about physical touching. It is any unwanted sexual conduct and this may include sexual innuendo or inappropriate humour.  The person’s intention is not relevant. If the person experiencing the behaviour is offended, humiliated or intimidated it could be sexual harassment,” Ms Jenkins said.

According to statistics, 97 per cent of sexual harassment cases are non-physical. Sexually suggestive comments or jokes is the most common form of sexual harassment, but behaviours can also include staring or leering, unwanted invitations for dates or sex, intrusive questions about an employee’s private life or unnecessary familiarity.

3. It only happened once so I shouldn’t complain. It probably won’t happen again.

“Just one incident is enough. Although some people might ignore one incident of sexual harassment, the important thing is that it doesn’t need to be repeated to be unwelcome conduct. If you can possibly tell a person you didn’t like their comment or behaviour, often that stops the behaviour being repeated,” Ms Jenkins said. (Research shows almost half of all sexual harassment at work stops after a complaint is made.)

“The critical thing to say here is that that anyone who makes a complaint of sexual harassment is supported by the legislation. It’s true that people often feel their job is in danger, particularly when we know that sexual harassment often comes from a manager or senior manager to more junior staff. But there is provision under the Equal Opportunity Act which protects against victimisation should a person press ahead with a formal complaint,” she said.

5. Maybe the perpetrator thought I had been flirting with them. Maybe I caused it.

“The troubling aspect of this response is there is a sense of victim (self) blaming. Sexual harassment is unlawful and you should not feel like it is your fault. The more important point here is that people should be aware of appropriate boundaries and workplace behaviours,” Ms Jenkins said.

Sexual harassment is unlawful and employers and managers must legally take reasonable measures to eliminate it.

For more information or advice, check out the Australian Human Rights Commission website.

Want to read more about sexual harassment? Try these articles:

Robbie Williams and his wife are being sued for sexual harassment.

She complained about sexual harassment. Her workplace said, “get on with it”.

If a woman is “okay” with it, is this still sexual harassment?

Have you been sexually harassed at work? I have.

Have you experienced sexual harassment at work?

Some people don't even know they are doing it or that their behaviour constitutes harassment. I had a work colleague who use to like to tell me dirty, sexual jokes, even after I told him that I didn't want to hear it. In the end I told him that I had a case against him for sexual harrassment and if he kept it up, I'd take it further. He was so shocked and sorry and he's never done it again. I think that we need to educate people early on about what is appropriate and what isn't, because the message doesn't always get through, for both men and women.

I was being sexually harassed at work by a male work colleague, by way of inappropriate touching and hugging and sexually suggestive comments and jokes. He did it to all the females at work,who all just laughed about it and thought it was funny. I had enough one day,and told him to keep his hands of of me and to stop the filthy talk or I would be putting him on a sexual harassment charge.
He was very shocked,very apologetic and he never did it again.
You need to learn to speak up and say something and tell them to stop!

Doesn't necessarily work. I spoke up. Had my contract terminated the next day.