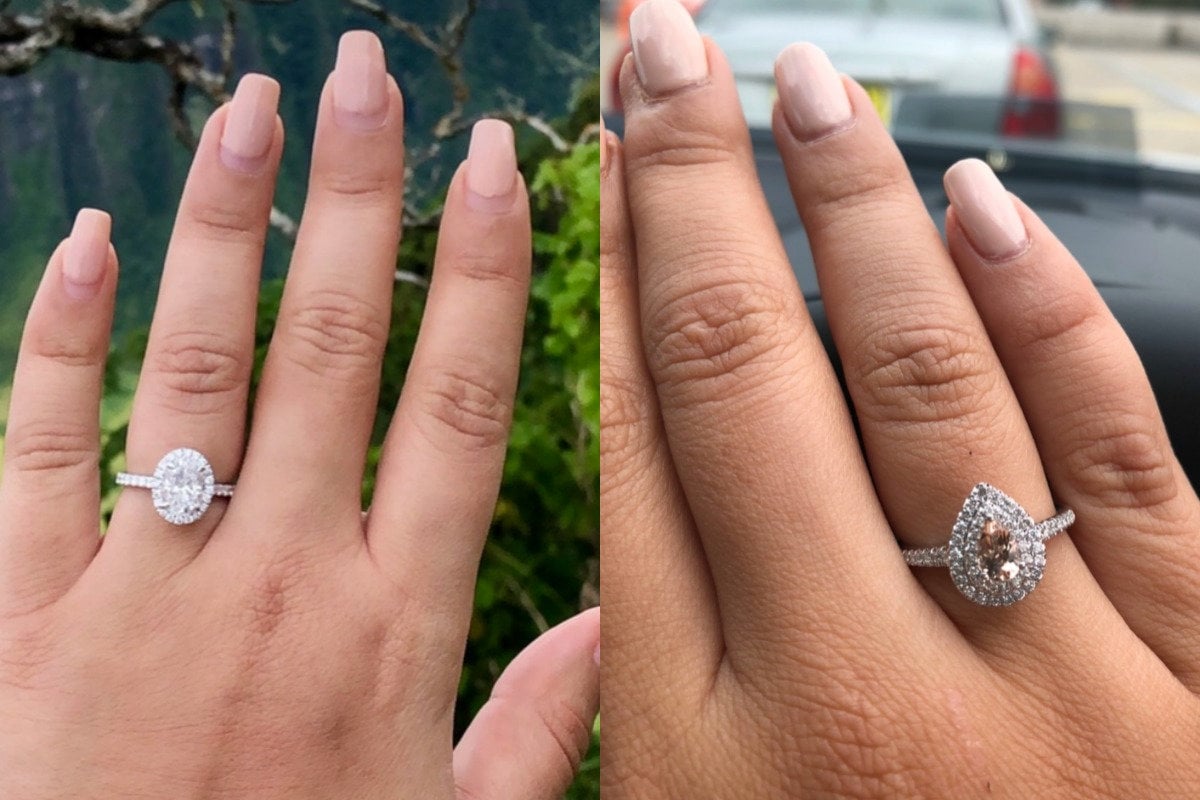 I’m standing in front of a jewellery store cabinet full to the brim with earrings, necklaces and rings. I scan its contents until I spot what I’m looking for: an engagement ring. Pear-shaped, with tiny diamonds on the outside and a morganite stone in the centre.

Initially, it was the glassy pink colour that attracted me to it and when I looked into the meaning of the gemstone, I felt like it represented exactly what I needed. Morganite is connected to the soul, the heart and love. Wearing it is supposed to bring you healing energy, compassion, joy, confidence, inner strength and unconditional love.

All qualities at that point in time, I felt like I was lacking because I didn’t know exactly who I was. I’d just come out of a long-term relationship that so severely diminished my self-worth, I felt like a shadow of who I used to be. Negative self-talk filled my head and I felt worthless in almost every single way.

Watch: Engagement ring trends through the decades. Post continues below.

It was a relationship that had started incredibly quickly, with empty gifts, endless compliments and constant admiration.

My ex told me how he felt early on and our relationship intensified quickly. Looking back, these all should have been red flags at the time but I was so swept up that I ignored the fundamental differences we had in our values.

Years into the relationship, I was so worn down and exhausted from defending what was important to me that I simply gave up.

I made excuses for him, I stopped seeing my friends and I rarely attended social events. If I did, I knew I would face a barrage of text messages asking me what I was doing, who I was with and accusing me of being unfaithful.

It was ironic because it wasn’t long before I learned of my ex’s own cheating. Yet when I confronted him, instead of an apology I had his own lies turned back on me.

I was told that I was delusional, I was called every awful name you could think of and was made to believe that I was worthless and that nobody would ever love me.

When I would fight back my ex would tell me that ending up with him showed that I was more like him than I knew. That I wasn’t honest with myself about who I really was: a fundamentally bad person.

He planted insecurities that would take years to untangle and the ring was my first step in doing exactly that.

The smiley assistant came over and broke my thoughts, offering me her help. Together, we made slight modifications to the ring and I ordered it that day. 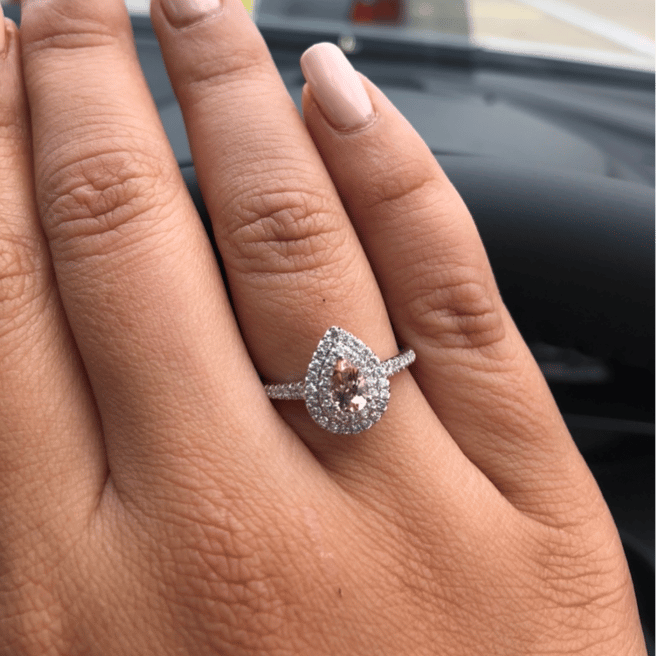 It would arrive in a few weeks just in time for Christmas. She seemed a bit unsure of why I was buying myself what was technically classified as an engagement ring but she was kind enough not to probe.

‘It’s a present to myself,’ I told her offering a half smile with my explanation. In a way, it was an engagement ring because it represented a commitment to myself. It was a promise not to forget who I was and a reminder that having love and respect for yourself is the most important thing. That if you can’t love yourself, you can’t expect anyone else to.

I wore it on my right ring finger and every time I looked down at it, it made me smile. I felt like it gave me a quiet strength.

My ring got lots of compliments and often became a conversation starter. Some assumed I was indeed engaged while others thought it was a promise ring.

At first, these questions made me feel uncomfortable. But as I started to feel more and more like myself again over the coming months, with the support of friends, family and counselling, when asked if I was engaged, I would respond with: ‘Yes to myself.’ Though I’d become used to the comments, eventually I moved the ring to my middle finger on the same hand.

Just six months later, I met my now fiancé who like many others, asked me about where the ring had come from. I told him exactly what it meant, explaining a time in my life that I’d rather forget but one that I thought was important for him to know about because so few who were close to me did.

I thought he would be terrified and run in the other direction but I’d promised myself that I’d be honest instead of embarrassed about the mental manipulation I had faced. It wasn’t my fault. None of it was.

We started dating and that Christmas, my partner surprised me with morganite earrings to go with my ring. It was one of the most meaningful gifts I had ever received because while to the world they were a nice pair of earrings, I knew and understood the symbolism behind them.

That he deeply understood who I was, how I was healing and that more than anything, he wanted to help.

Nearly two years after I bought myself the morganite engagement ring, we went on a holiday to Hawaii where my partner proposed to me with his own engagement ring. A beautiful oval diamond that represents the beginning of our story together. 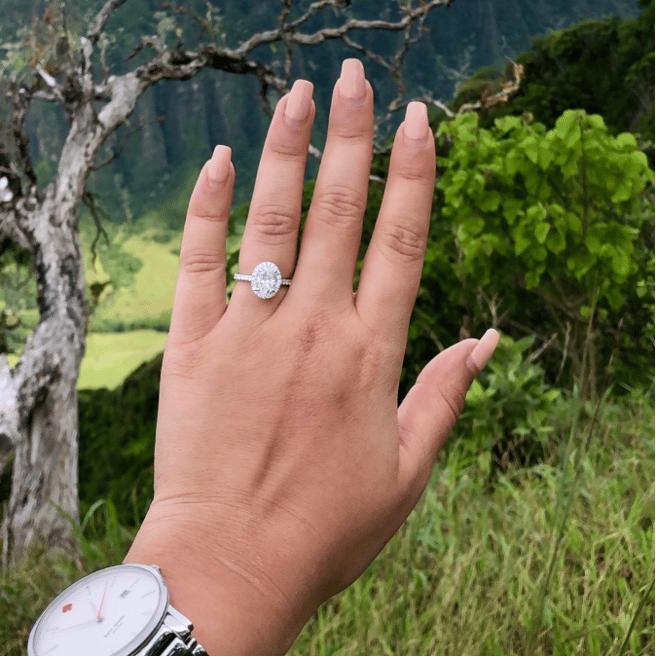 I don’t feel like I have much of a need for the morganite engagement ring anymore. I haven’t worn it since we came back from our holiday and it now sits in a jewellery box in my wardrobe. I no longer feel like I need the protection or healing it once gave me because now I know exactly who I am.

But I’m lucky enough to have two engagement rings. One is a reminder of the forever love my fiancé and I have for each other. The other is a reminder of the love I have for myself. It took me a long time to get this love back but when I finally did, it opened me up to a future that was so much brighter than anything I ever could have imagined. ﻿

Reply
Upvote
2 upvotes
Perhaps wear both rings as a reminder that you will never lose yourself again?