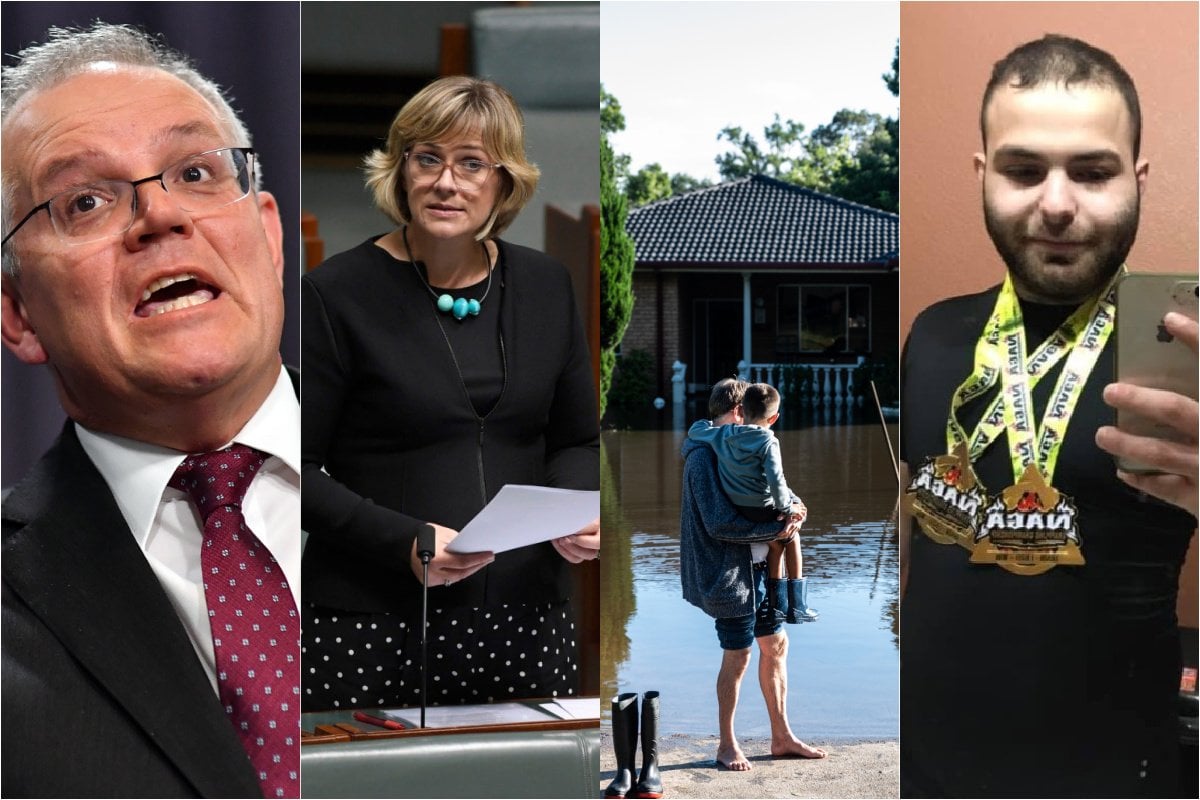 On Tuesday morning Prime Minister Scott Morrison held a press conference in which he acknowledged that many Australian women did not believe their concerns had been heard, following weeks of protests and allegations about rape, harassment and abhorrent work culture in Parliament House.

He promised to "get our house in order" after it emerged male staffers - one of whom has been sacked - filmed themselves performing solo sex acts in the offices of female MPs.

But during questions after the press conference, Morrison accused News Corp of investigating a complaint related to "harassment of a woman in a women's toilet," after a Sky News reporter in the room challenged him on the issue of workplace harassment.

'I was wrong': Scott Morrison apologises to News Corp for harassment allegation https://t.co/wuPBZO7Spq

"So let's not all of us who sit in glass houses here start getting into that," said Morrison.

News Corp Australasia Executive Chairman Michael Miller then released a statement in response to the comment which read, "Prime Minister Scott Morrison was wrong today to claim an investigation is under way into a complaint accusing an employee of harassment against a woman in a female toilet. No complaint has been received and News Corp and Sky News are not dealing with a complaint."

Morrison was forced to apologise, releasing his own statement Tuesday night that read, "In the course of today's media conference when responding to further questions I deeply regret my insensitive response to a question from a News Ltd journalist by making an anonymous reference to an incident at News Ltd that has been rejected by the company.

"I accept their account. I was wrong to raise it, the emotion of the moment is no excuse. I especially wish to apologise to the individual at the centre of the incident and others directly impacted.

"I had no right to raise this issue and especially without their permission."

Former prime minister Malcolm Turnbull told the ABC Mr Morrison's media conference was "too much about him."

"What it tells you is that ensuring that women are respected in the workplace is not a priority of the government - it was a priority of my government which was why the report was undertaken and written," he said, adding that it was wrong to claim the corporate sector had the same problems as the political sphere.

"It is not. I mean, the truth is, I had to change the ministerial code to say that ministers must not sleep with their staff," he said. "That has been out of order in the corporate world for decades and yet I had to change the rules because frankly far too many of my colleagues thought that it was not OK."

Right now, MPs are not technically included in the Sex Discrimination Act of 1984.

Independent MP Zali Steggall introduced Law Council drafted amendments to the Act on March 15, but on Tuesday the government failed to support an urgent debate on the Bill.

Incredibly disappointing. The Govt failed to support an urgent debate on the Sex Discrimination Act to ensure sexual harassment is prohibited in all circumstances. The Govt needs to get this House in order and today they again missed an opportunity to act!#Auspol #EnoughIsEnough pic.twitter.com/GndzesGvS4

Ms Stegall has previously written to Prime Minister Scott Morrison, telling him: "This is a proactive tangible policy step that the government can take now to call out sexual harassment and reassure people that it’s more than just words, you’re prepared to take action."

NSW residents have been warned flood risks are unlikely to abate for several days despite rainfall easing across the state's coast and as 15,000 people remain on alert for evacuation orders.

Major flooding was occurring early on Wednesday morning northwest of Sydney along the Hawkesbury River at North Richmond, Windsor and on the Colo River.

There was also major flooding on the Nepean River which peaked at 12.85 metres at Menangle, southwest of Sydney, about 10pm on Tuesday.

One of the scores of rescues carried out today on the Hawkesbury River was a young family, tossed into the flood waters when a rescue boat overturned. @DamoNews #NSWFloods #9News pic.twitter.com/1vbMPRm2Cc

The State Emergency Service said the Nepean River at Penrith was likely to peak near 7.70 metres about 7am on Wednesday, with minor flooding.

It said flooding of sewerage pumping stations in the area had resulted in raw sewerage being discharged into floodwaters.

About 18,000 NSW residents have been told to move from their homes since last week, with warnings the flood clean-up could stretch beyond Easter. 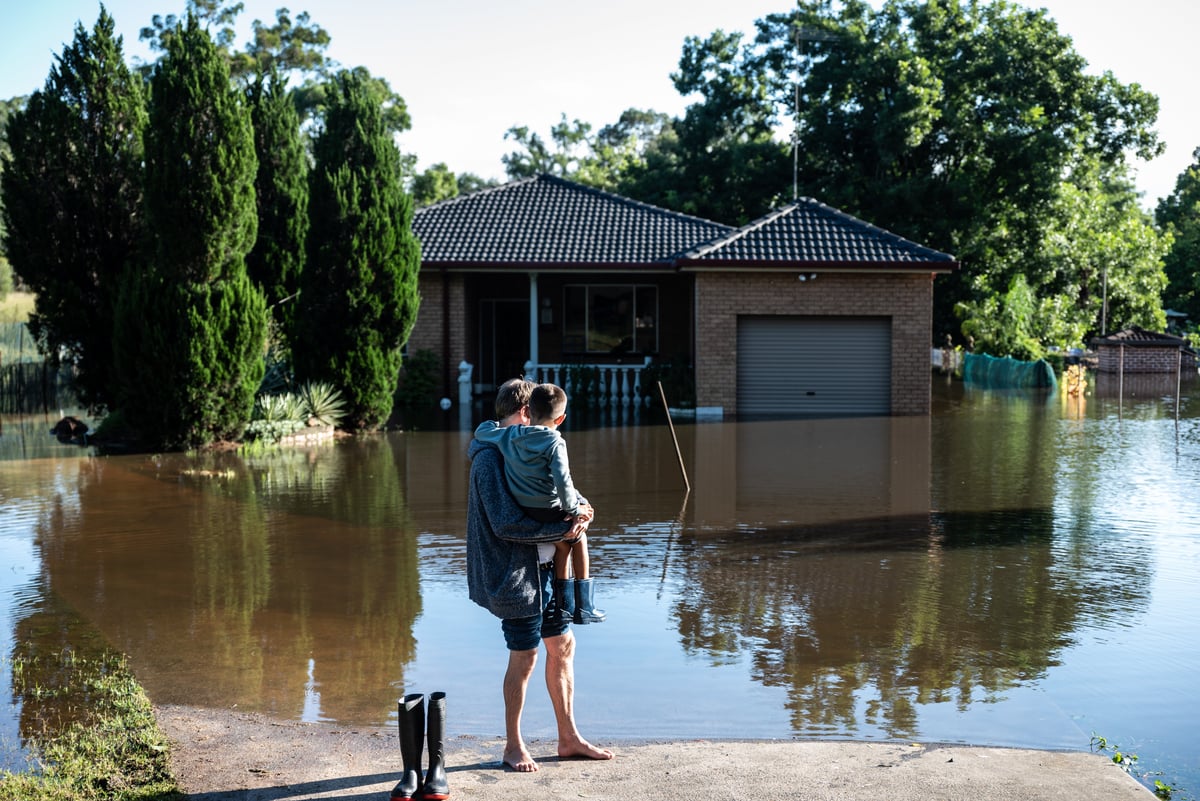 David Williams and his son Lucas (6) standing in front of a home affected by the flood, on March 23, 2021 in Londonderry Sydney, Australia. Image: Getty.

Premier Gladys Berejiklian on Tuesday said there were several weather fronts, "catastrophic" in their dimensions, impacting large swathes of the state.

"This is a weather incident beyond anything we could have comprehended," Ms Berejiklian said in parliament.

About 280 NSW schools were closed on Tuesday due to the rainfall, with a similar number expected to be shut on Wednesday.

Flood warnings remain in place in southern Queensland despite expectations of easing rainfall after an earlier deluge resulted in roads being cut off and schools closed.

A major flood warning is active for the Logan River, inland from the Gold Coast, and a moderate flood warning has been issued for the Albert River, both south of Brisbane.

As predicted another burst of of heavy showers and possible storms tracking towards SE QLD.

Be aware catchment is saturated so any heavy showers or storms could produce flash floods and submerge roads.

"While rainfall is easing, flood warnings remain in place for the Logan and Albert Rivers," Logan city authorities said on Tuesday night.

Four homes on the Gold Coast have been evacuated due to landslide risk while more than 100 properties are being inspected for damage in the southeast, Premier Annastacia Palaszczuk told parliament on Tuesday morning.

More than 20 schools were closed in the region, mainly because of cut roads.

Aussie-made COVID vaccine approved for use.

The nation's medicine regulator overnight approved more than 830,000 doses of Melbourne-made AstraZeneca vaccine, confirming they are of the same quality as those made overseas.

"Testing of the vaccine batches in our Canberra laboratories plus review of extensive manufacturing documentation, has ensured that the locally-manufactured vaccine has exactly the same composition and performance as the overseas-manufactured vaccine," the Therapeutic Goods Administrations said in a statement.

"We will now be able to provide secure access to large numbers of doses of a domestically-produced vaccine, with the Australian government having procured 50 million doses for delivery in the coming months."

The locally-produced AstraZeneca doses will be used as part of the 'phase 1b' vaccination program which started on Monday and will be available at more than 4000 providers including GP clinics and official health services.

Phase 1b will see six million Australians get their jabs, mostly via GP clinics.

The program takes in everyone over the age of 70, along with Indigenous Australians over 55 and younger adults with a medical condition or disability.

US President Joe Biden has called for a ban on assault weapons and tighter gun control measures after a mass shooting left 10 people dead in Colorado.

21-year-old Ahmad Al Aliwi Alissa, who was shot through the leg and taken into custody after officers arrived at the scene of the shooting in a shop in Boulder on Monday, has been described by his sibling as "deeply disturbed," reports The Daily Beast.

The victims of the latest shooting in America in recent weeks, range in age from 20 to 65 - with a local police officer among the dead.

The 21-year-old suspect in a devastating shooting at a United States supermarket this week has been charged with 10 counts of murder.@DavidWoiwod is in Boulder, Colorado with the details. pic.twitter.com/ONNyTz6WMy

"I don't need to wait another minute, let alone another hour, to take common sense steps that will save lives in the future," Joe Biden said in a press conference, adding that "we can ban assault weapons".

"This is not and should not be a partisan issue," Biden said at the White House.

"It's an American issue that will save lives, American lives. We must act."

"We can ban assault weapons and high capacity magazines in this country, once again."

JUST IN: "I don't need to wait another minute, let alone an hour...to urge my colleagues in the House and Senate to act" on gun reform measures," President @JoeBiden pic.twitter.com/laawAOBzqW

The mass shooting in Boulder followed a gunman's killing the previous week of eight people at spas in Atlanta, bringing new attention to US gun violence.

Flags at the White House were at half staff until sunset on Monday to commemorate the Atlanta shooting victims.

They flew at full staff for a few hours on Tuesday morning before being lowered again to mark the Boulder killings.

Any effort to move the US toward greater gun control has historically been difficult with his fellow Democrats in favour and Republicans largely opposed.

Tasmania will become the third Australian jurisdiction to legalise voluntary assisted dying after the legislation passed the state's upper house.

The lower house had backed the bill in 16-6 vote on March 5, with Premier Peter Gutwein among a handful of Liberals to support it.

The upper house, where the legislation was introduced, had already passed the bill unanimously late last year.

The new laws are expected to become active in Tasmania in 18 months.

It is the fourth time proposed euthanasia laws have come before Tasmania's parliament.

Prince Harry has been given a role at a mental health start-up based in Silicon Valley.

The Duke of Sussex is serving as chief impact officer at BetterUp, a coaching and mental health firm, according to the company's website.

The prince has been living in California with his wife Meghan, Duchess of Sussex, and their son Archie for the past year.

He told the Wall Street Journal that he has taken the job so he can "help create impact in people's lives".

- The last member of a full jury of 12 has been seated in the trial of Derek Chauvin, facing murder charges over the death of George Floyd. Lawyers worked through 100 people, dismissing most because they acknowledged strong views about an incident that was captured on bystander video and beamed across the world.

- A seven-year-old girl has died in her home when security forces opened fire in a Myanmar city. She's the youngest victim so far in the violence.

- Russia's Vladimir Putin is to get a coronavirus vaccine today, but the Kremlin isn't revealing which of the three Russian shots he'll get.

- A buyer has paid $US62 million for the world's largest canvas painting, making it the second most expensive such work sold at auction by a living artist.