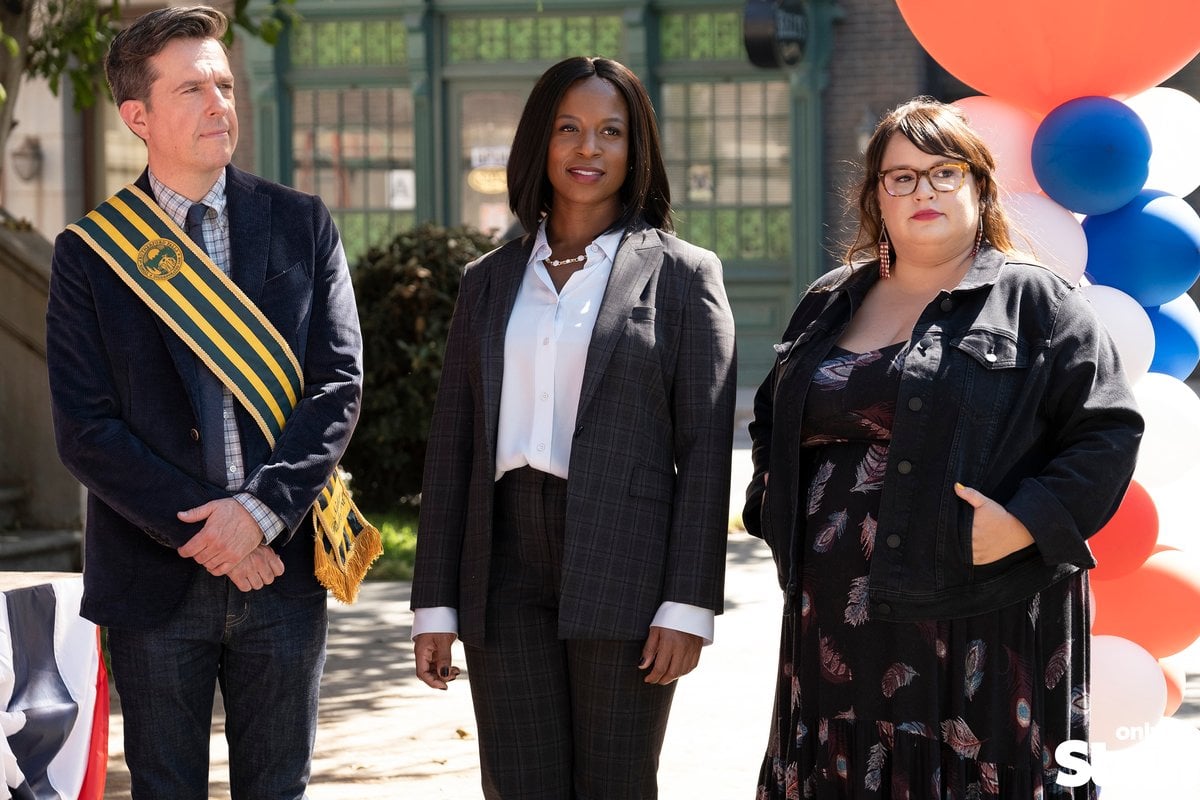 Six years after the end of Parks and Recreation, Michael Schur has returned to the world of small-town America.

The creator of Parks and Recreation and The Good Place has teamed up with Brooklyn Nine-Nine and Superstore writer and producer Sierra Teller Ornelas, and The Office's Ed Helms, to create comedy series Rutherford Falls.

The new series, which premieres only on Stan on April 23, follows Nathan Rutherford (Ed Helms), a proud descendant of the town's founder, who is passionate about preserving his family's place in history.

Watch the trailer for Stan's Rutherford Falls below. Post continues after video.

While Nathan is attempting to preserve his family's legacy by working at the town's local heritage museum, his childhood best friend, Reagan (Jana Schmieding), is doing the same for her ancestors in the Minishonka Nation, running a culture centre at the tribe's casino.

As the series continues, the mayor ignites a town-wide debate over whether to remove the statue of the town's namesake "Big Larry", leading Nathan and Reagan to find themselves at a difficult crossroads.

As one of the first ever Native American sitcoms, the new series is breaking barriers in more ways than one.

Led by showrunner Ornelas, a member of the Navajo nation, the series featured a diverse writing team with a record number of writers of Indigenous heritage.

Mamamia spoke to co-creators Michael Schur and Sierra Teller Ornelas about the story behind the show, their one rule for creating scripted comedy television, and their fears about the future of comfort TV.

Where did the initial idea for Rutherford Falls come from?

M: Ed [Helms] and I had worked together on The Office a million years ago, and we had always said, 'Hey, we should talk about doing another show someday.'

Five or six years ago, we started meeting every couple of weeks, and we would just talk about what we thought was interesting about the world. We started designing this character who was good-hearted and sincere and empathetic and well-intentioned, but who had this enormous blind spot for his own family history. A guy who has swallowed whole this historical narrative about his own family that he cares very deeply about, which then comes into conflict with something external, and then slowly causes him to have to re-examine that narrative.

Eventually, we realised the other half of that narrative should be Native American history. Because if you trace any colonial American family back far enough, you get to the point where the Mayflower showed up.

Once we knew that was the direction we wanted to go in, we knew we needed someone to write that part of the story. And Sierra had worked on Brooklyn Nine-Nine, which is a show I co-created. And she had also, coincidentally, developed a show with Ed. So we decided to get in touch with her and see if it sparked anything in her. 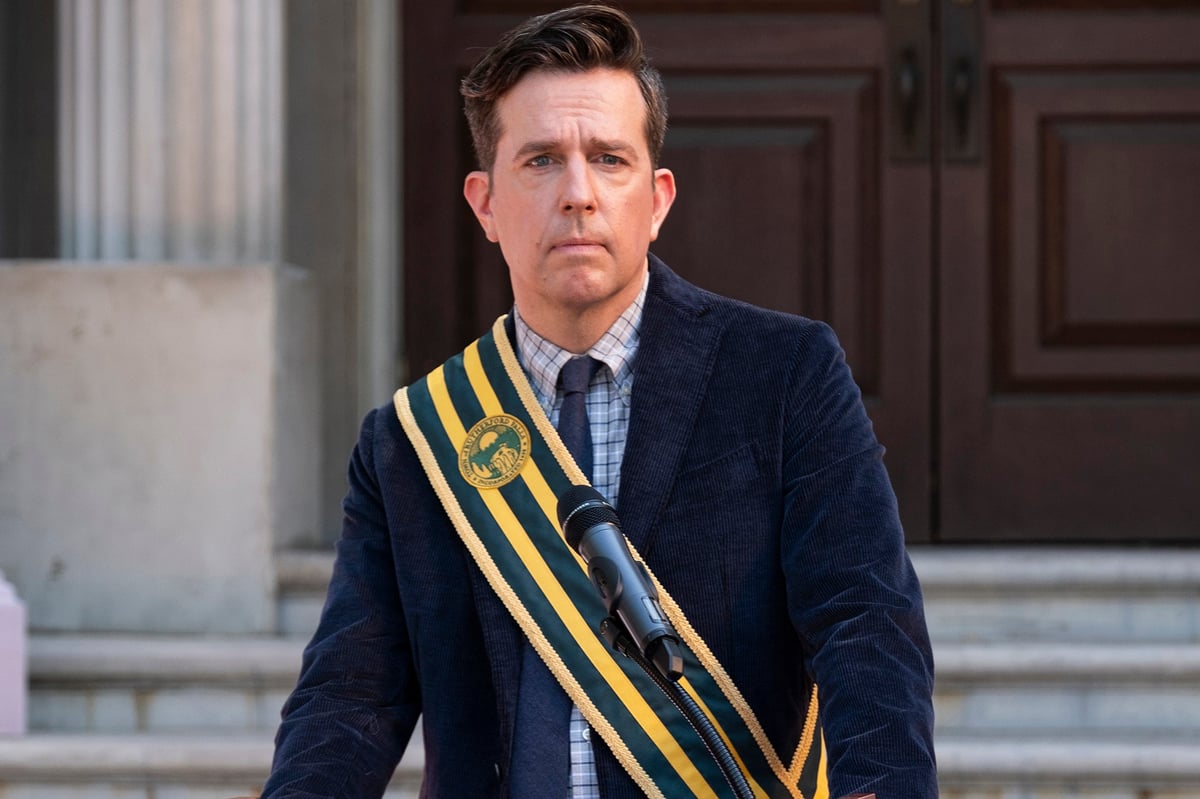 S: I've been working in TV for 10 years as a writer, and I had just worked on Superstore, and I wanted to take a break to figure out what I wanted to write myself versus writing in the voice of other people. I really wanted to focus on a [Native American] story and I got a call that Mike and Ed wanted to talk to me, and they were also working on something with Native American themes. I really loved the characters, the idea, and a lot of the themes that they were chasing.

I had worked for many years at the Smithsonian's National Museum of the American Indian, and I've grown up in museums as my mum is a really well-known native artist. So I just had a million stories, and I knew a lot of characters. I've worked with a lot of Nathan Rutherfords in my life.

We crafted the world and the characters [for almost another year], and then we ended up selling the show to Peacock.

You’ve both worked in writer’s rooms for years now. How have you seen these spaces change over time?

S: The [writer's room] that I was working in in 2010 was very progressive. But I feel like that room now would not be seen as progressive, demographically.

I've always been very lucky to be in writer's rooms where there were a lot of diverse voices and show runners that wanted to hear from the room.

But it's statistically not great. If you run the numbers, there's no way you can be like, 'We're all good.' But I think there's a shift happening and it has momentum in a way that I think is beyond a fad.

Plus, from a viewer's standpoint, it's clear that having a varied group of people and experiences in a writer's room makes for better shows.

S: Yes! Especially in comedy. I worked on a show called Happy Endings, and they were trying to do this joke about one character's phone getting shut off. And I was like, 'That's not how that works.' And they were like, 'How do you know?' And I told them, 'Because my phone just got shut off.' I think when you have a diversity of voices in a room, it lends itself to better comedy.

Now what we're seeing is people have come through the pipeline and they've actually had some training and written on shows. And now they're in the position where they can create their own shows. It's like this long, domino effect. And that started changing a decade ago or more. So, it takes a long time.

S: I think the big thing is we want to see diverse voices at the top. I think that's what was really great about our writer's room on Rutherford Falls. There was diversity at every level and everyone felt emboldened to speak up and say how they felt. I think feeling that safety in a room is so important, and we really tried to make that happen for everybody.

In terms of the cast and the writers involved, Rutherford Falls is being referred to as a breakthrough moment for Indigenous representation. Do you think comedy is a good space to get the conversation going around issues that have been under-represented in the past?

S: Absolutely. There's something revolutionary about watching native people be happy on screen and have, like, regular lives. I think, so often, we're kind of either never depicted or depicted as villains or depicted as magical, mystical creatures. To just have us exist and be and have situational comedies, I think that's revolutionary, for sure.

M: Yeah, that's the first thing. And the most important, no question.

I went through this a bit on The Good Place where the show had, as its backbone, this really dense moral philosophy stuff. We made a list in the writer's room at the very beginning of season one of six things that every episode had to be in order to be successful. And the [first thing on that list] was that it had to be funny... because philosophy is so boring. I mean, I think it's fascinating, but it's not a very fun subject matter. The only way that a show can be successful in the delivery of any kind of message about anything is if it's entertaining and funny.

It's similar with Rutherford Falls. The first goal of every episode is, 'Is this story good? Is it funny? Is it entertaining?' Anything that comes after that in terms of big picture discussions about America or history or anything like that – that will only happen if the show is funny, and people like it.

A lot of viewers rewatched shows like Parks and Recreation, The Office, and Brooklyn Nine-Nine during the pandemic. Why do you think viewers find comfort in these shows?

S: I found this thing on Instagram – where I get all my science, so get ready – where they said that people watch things that they've seen before because they don't feel any anxiety about how it's going to end. It's almost like a warm blanket, because you know where you're headed. You just get to watch it and enjoy it, and you don't feel any apprehension about what's going to happen. 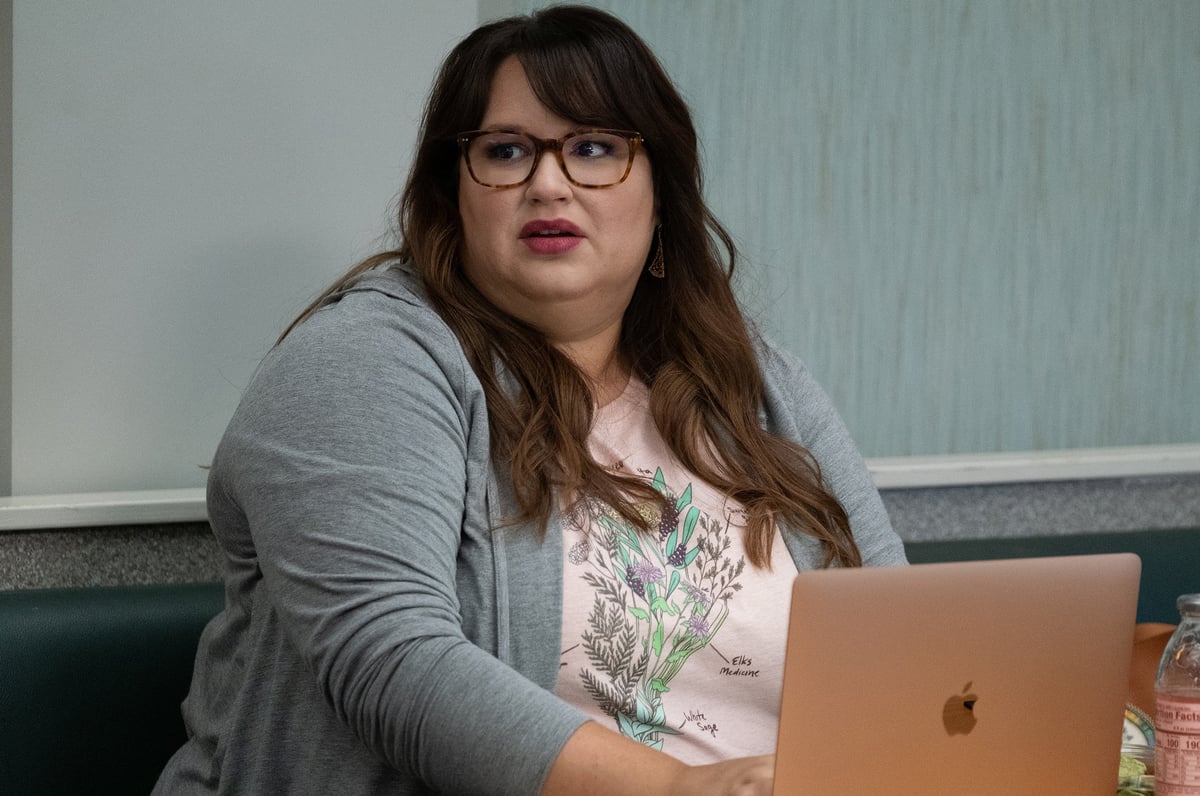 M: I'll say this too, the entire landscape of TV has changed. I could make a whole podcast just about this subject, so I'll try not to bore you. But the thing that TV has over movies is you get to tell character's stories over very long periods of time. It's very, I think, human to want to see a story told about a group of people that you like... and to see them slowly changing and maturing.

That is the great advantage of television over every other art form. And I worry a bit, frankly, about this new world where every show is 10 episodes long. There's 125 Parks and Recreation episodes, 200 episodes of The Office, and 150-something Brooklyn Nine-Nine episodes, and you can settle in to this lovely, comforting re-watch where you get to see these people age and mature over years and years and years. And now, shows do 30 episodes and it's like, 'Alright, we're done. We're moving on.'

And it's not that there aren't certain stories that should be told in 30 or 40 episodes. But I think it seems to be on the way out and that makes me sad. Every night I go to bed and watch an episode of Cheers – that show is from 40 years ago – and I still can't believe how comforting it is to watch it.

I worry that we're heading for a world where the longest running TV show is gonna be a 50-episode deal where you can watch the whole thing in one long plane ride.

Rutherford Falls premieres April 23 only on Stan, with all episodes available at once.

This interview has been edited for length and clarity.

D
drjdc1 a year ago

Reply
Upvote
Both writers said their main goal is that the show is "very, very, very funny". I just finished the first episode with my wife and neither of us laughed once. It was depressing. If this is how the culture is affecting our comedy moving forward then I guess I'll be left to rewatch Friends, The Office, and Parks And Rec for the rest of my life instead of trying this new stuff.
Resources
Very Peri
News
General
Opinion
True Crime
Politics
Sport
Explainer
Entertainment
Celebrity
Reality TV
Movies
TV
Books
Rogue
Royal
Lifestyle
Beauty
Fashion
Weddings
Home
Wellness
Health
Fitness
Travel
Food
Family
Before The Bump
Pregnancy
Baby
Kids
Teens
School
Parent Opinion
Work & Money
Money
Finance
Career
Lady Startup