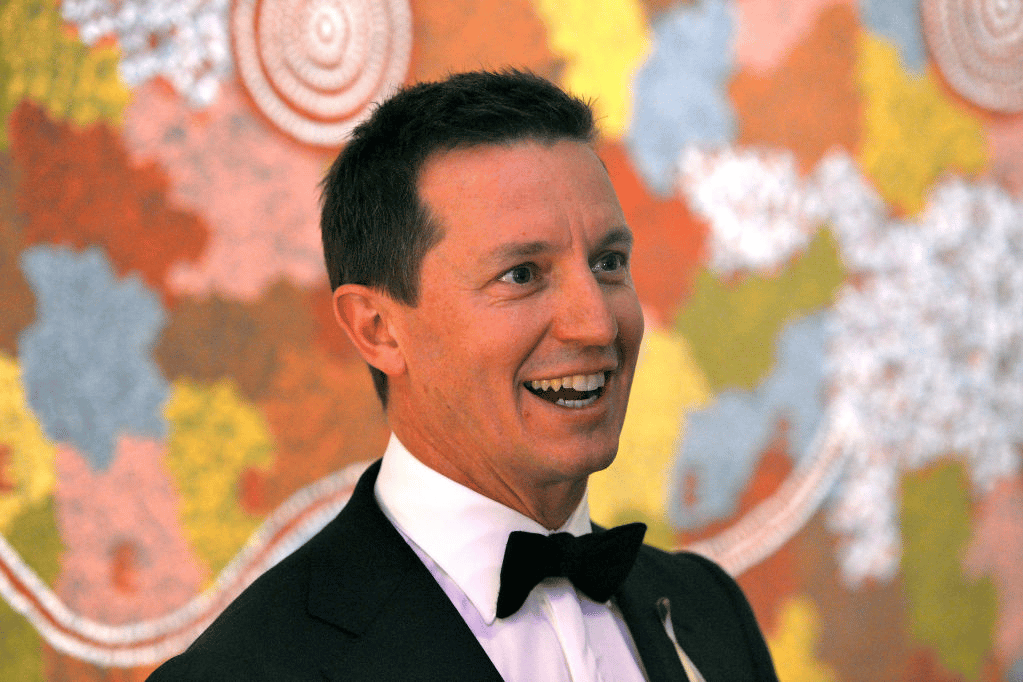 Lockdown restrictions over the last few months lead to some fairly unique human behaviours: We all hosted pub quizzes with our friends and family on Zoom and then mutually, silently, agreed to just... stop. Sourdough bread became a symbol of having your life together. And suddenly everyone was an artist.

The latter was the stay-at-home hobby of choice for Rove McManus, but it was not his first rodeo.

Rove is a familiar face to anyone who has watched Australian television. For years, the 46-year-old triple-Gold Logie winner would tell us to say "hi" to our mums for him on Rove Live, ﻿and he's also appeared on many other shows, such as The Project, Celebrity Name Game and Hughesy, We Have a Problem.

While we know him as the comedian and TV host who has interviewed some of the world's biggest names, Rove may not have made it to our screens at all if it wasn't for a choice during his university days.

Since he was a child, Rove had wanted to be an artist.

If you looked at his high school yearbook, where students' of the day shared their future ambitions, his career goal would read: "Actor/cartoonist".

"I was still sort of hedging my bets even then," Rove said in an interview with Mamamia. "But there wasn't really any avenue for me to do it."

He took a gap year after high school and then began studying a fine arts degree,

"I took a year off school and in that time I got into a fine arts course, which I did, and in the second year of that I started doing standup, and there I was with the fork in the road of which choice to make and off I went to perform."

So for decades, Rove did just that. His profile rose quickly until he became a friendly face on TV and a recognisable voice on the radio.

All the while, he drew.

Sometimes it was just with scribbles on a piece of paper while talking to someone on the phone. At other times, he'd sit down with the goal of creating something.

Unlike his career, he enjoyed that there was no real 'good' or 'bad' when it came to art.

"I feel there is no way of truly being bad at it," he said.

"Other artistic styles, like acting, singing, or doing standup comedy, you can tell the difference between the good and the bad. I think there's no interpretation of someone who's not a very good singer being okay, or someone who is a bit iffy on the guitar and someone going 'but I can really hear what they're saying between the notes'. Drawing is very different."

In 2019, he released two children's books which he also illustrated, and really rediscovered a passion.

This year, he's been working on more books - which coincided with the timing of the COVID-19 pandemic, and the subsequent stay-at-home measures.

The restrictions drastically affected the entertainment industry, with Rove saying he "lost six months worth of work in a day".

"I like many people found myself locked away in self-isolation. The first wave of restrictions that came in killed our industry, dead. The idea you can't have crowds of people together is what we do, whether it's live performing or TV with a studio audience, or even just a crew."

"Like many people I just found myself going 'what can I do?'"

Rove told Mamamia art was a fantastic outlet for his mental health during the chaos of 2020.

"It's such a great [form of] meditation. Especially with everything that's been going on the last few months, I've found it supremely beneficial.

"Now more than ever, art as an outlet for people can be really beneficial."

Thanks to Zoey, Amelia and Joanna for their brilliant ideas for Doodle A Day 1. See who gets me scribbling tomorrow 🖊 #RoveDoodleADay

He posted illustration videos on social media and suddenly found himself with a fresh opportunity: To, uh, host a live life drawing class. With real-life naked humans.

On Saturday, Rove will host Life Drawing Live on SBS - a live, two-hour chance to draw along with amateur artists and celebrities as they sketch live models in various poses.

Rove will be joined by a group of celebrity artists including Adam Liaw, Susie Youssef, Hunter Page-Lochard and Claudia Karvan.

The favourite activity of hens parties will be beamed directly into your home and whether you're a lockdown artist or not, Rove wants you to grab a wine, some paper and a pencil.

"I think it's safe to say when you have a group of nude models there... It's going to be a lot of fun."

Life Drawing Live will air on SBS and stream on SBS On Demand at 8.30pm AEST.