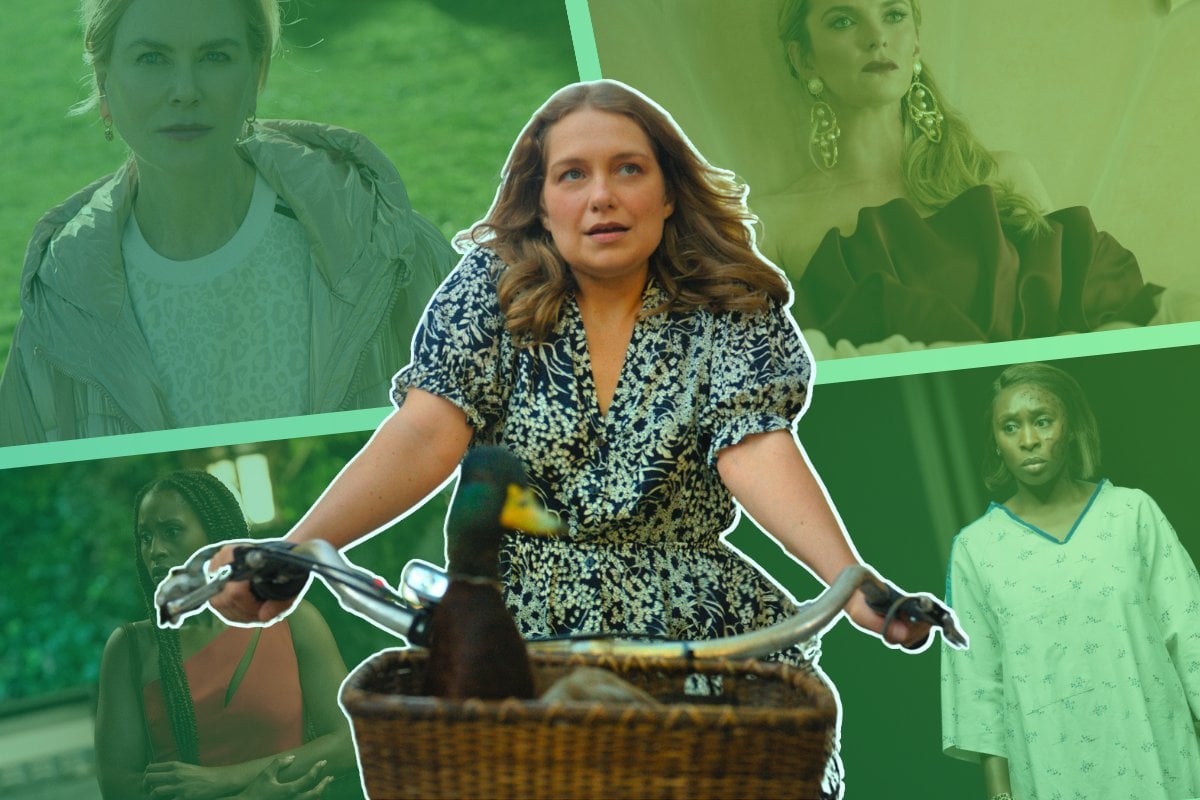 There were the obvious changes, of course: the masks, the precautions, the uncertainty. But then there were the... less obvious. Like the fact that her first co-star back was a duck.

Watch: The trailer for Roar on Apple TV+. Post continues below video.

Each tackles a different experience women may contend with simply because they are women.

In one episode, Nicole Kidman eats photographs to relive memories while going head-to-head with her mother with dementia, played by Australian acting royalty Judy Davis. In another, the brilliant Cynthia Erivo begins to find bite marks on her skin after she returns to work following the birth of her second child. Alison Brie, in a funny take on a police procedural, solves her own murder.

At just half an hour each, the episodes don't always offer solutions to the problems they present. But we can forgive that, because of just how validating they feel to watch. 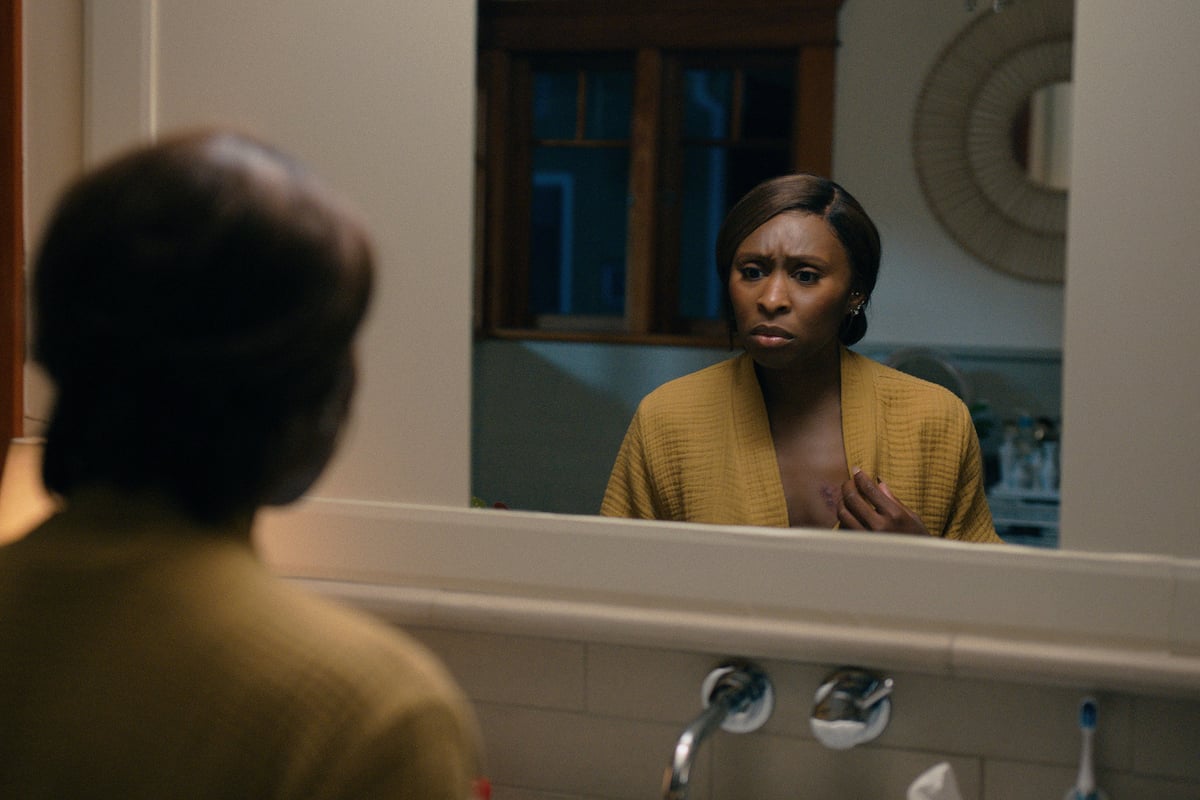 Wever stars in episode six, 'The Woman Who Was Fed By a Duck'. Her character is a single woman in her 30s, who spends her days down by the lake studying to become a doctor following the death of her dad. But despite all that, those around her seem more focused on her lack of a male partner.

Then one day, she discovers the man (duck) of her dreams - Larry, voiced by Justin Kirk. She brings her duckfriend home to shelter from a storm, and a relationship ensues.

Yes, it's as strange as it sounds.

In an interview with Mamamia ahead of the series debut, Wever explained how she approached her episode.

"The title was 'The Woman Who Was Fed By a Duck', and the way that I saw it was that this was a woman who was at a particularly uncertain time in her life. She had just experienced loss. She wasn't exactly sure what direction she wanted to move in yet. She was feeling disconnected from her sister who wanted things for her life that she didn't necessarily want for her own life," she said.

"And this duck comes along and says that he sees her and gives her what she thinks is support and feeds her and she thinks he's feeding her good things.

"And over the course of the episode, she realises that he is feeding her quite bad things. And by the end of the episode, what I hope is that she learns to feed herself. So that's kind of the arc that I tried to use to make sense of these elements." 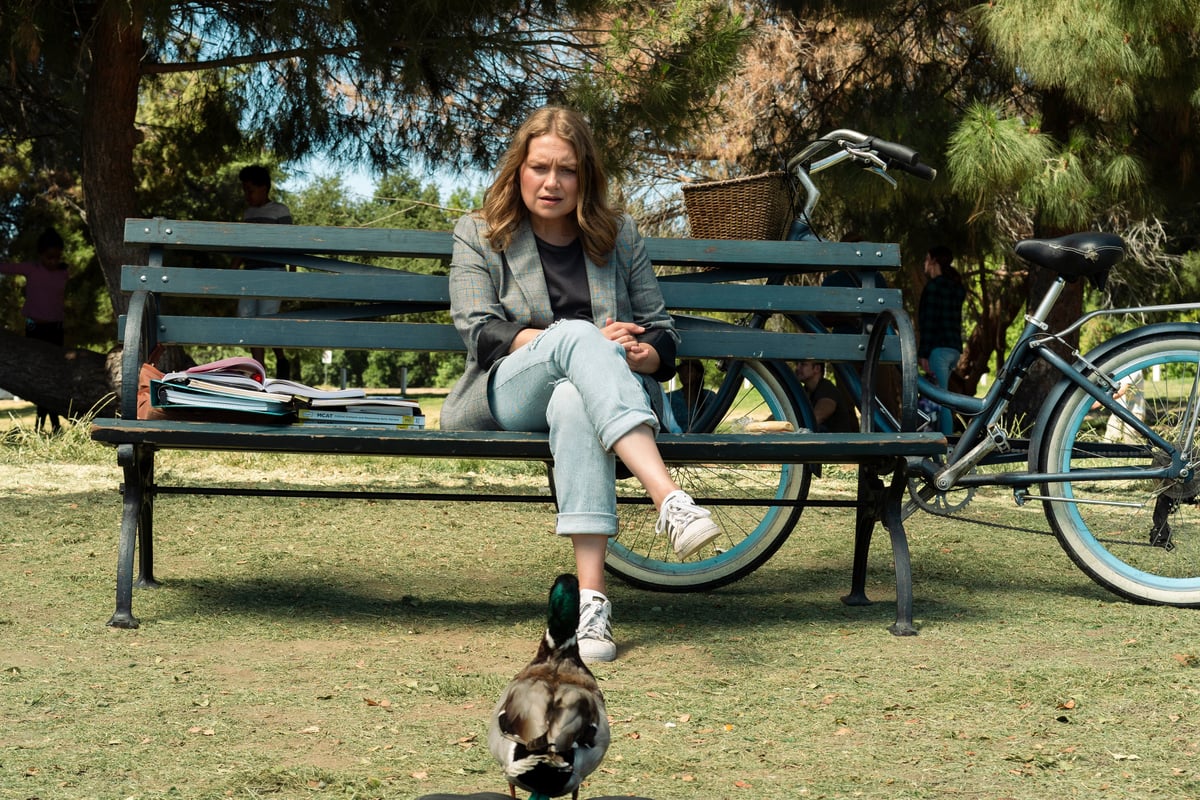 Wever said it was the absurdity of the storytelling that interested her most about Roar.

"The thing that drew me in most was just the craziness of the situation, and knowing that I could go to work and give this craziness a go but in a very contained amount of time. It's one pro, I think, of actors getting to go be part of something like an anthology series," she said.

"I get to try something risky or challenging or extraordinary or new. At least this was for me. Working with an animal, playing out this dynamic with an animal but over just a few weeks. It's not the same as committing to many months on a huge project."

It was, as she said, a risky project. As a viewer, you might think the risk is in basing a television episode about a woman's intimate relationship with an animal. That is weird, and Roar doesn't shy away from making you uncomfortable about that.

In fact, this episode contains the wildest thing I think I've ever seen in a TV show. It will likely become the most-talked about part of the series, and you will never look at ducks the same again afterwards.

But for Wever, the risk was more in the subtext of the relationship than its physicality.

In the beginning, Larry seems like the ideal partner (besides the duck part, I guess). Then, suddenly, with a biting, familiar sequence of gaslighting, you realise he's not.

"I just wanted to make sure that we were able to tell the story well, and tell a story that I actually feel a certain amount of responsibility for or towards," Wever explained.

"I hope that people feel that it's been treated responsibly and respectfully, even though it's given this absurdist, at times glossy sheen. I think that it's a story about a dynamic or relationship that often happens subtly or slowly, without the person understanding what's at play and why these things are happening, until all of a sudden they've gotten to the end of the relationship or the dynamic, and they're in this position, and they're feeling all the effects of it.

"We only had 30 minutes and 30 pages. So, we had to tell something that happens at times, especially in the beginning, quite delicately. We had to tell it quickly, sometimes with broad strokes, and hope that it landed effectively and responsibly."

It's an idea seen throughout the eight episodes. Despite their differences, Roar's tales succeed in telling both interesting individual stories and unifying women with perspectives on broad topics like ageing, grief, relationships, motherhood and career. 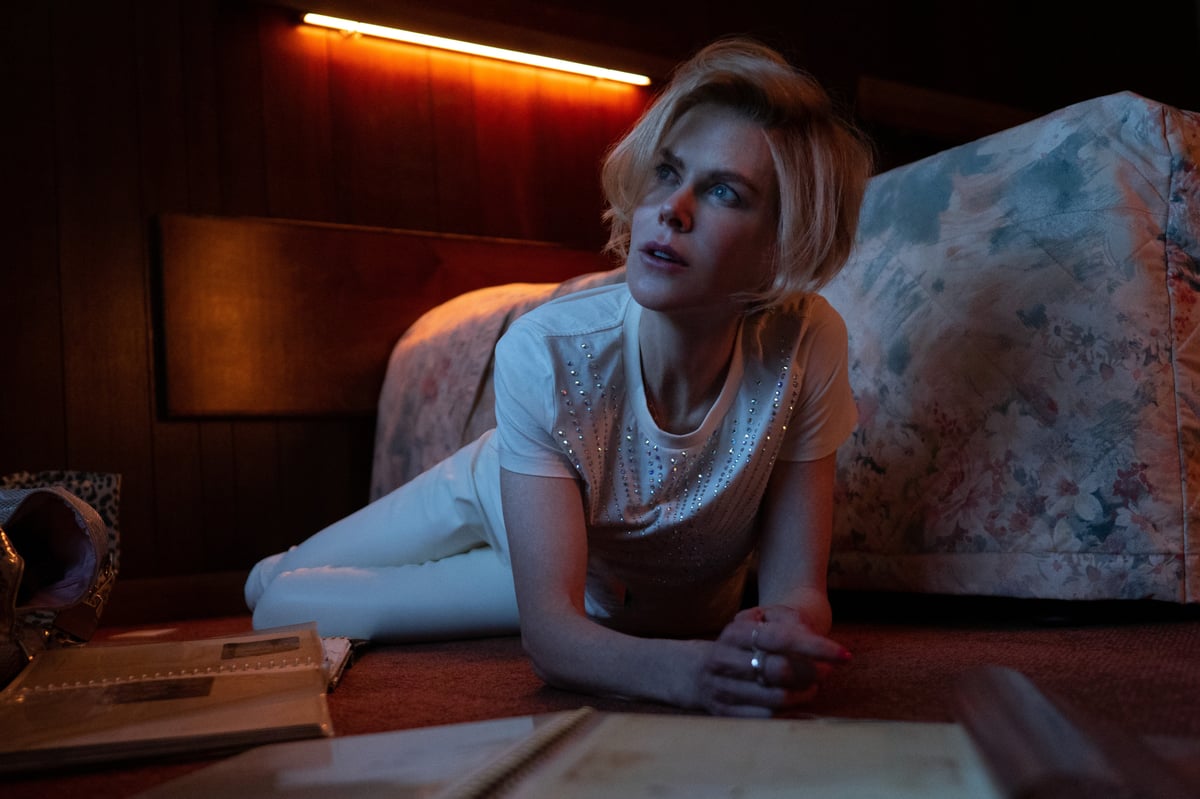 It will validate your experiences, and open your eyes to those of other women. But it's not just our trauma wrapped up in an absurdist bow.

There's hope here, and a succession of happy endings.

And we so desperately need those.

All eight episodes of Roar premiere on Friday, April 15 on Apple TV+.