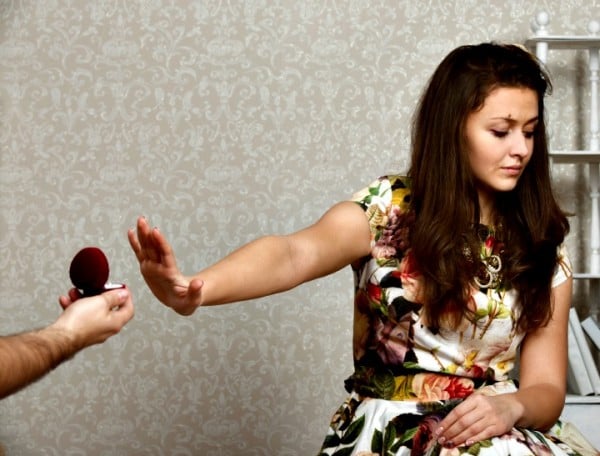 Getting engaged is supposed to be one of the most exciting and happy times in a young couple’s life. But not if the proposal gets rejected.

People who have rejected marriage proposals have taken to Reddit to share their juicy stories. And it ain’t pretty…

Here's our selection of some of the best, most cringe-worthy stories. You're so welcome.

squiddildo: "Because I was 17 and we'd been dating like a month."

PepsiMaxismycrack: "We were on our second date and he was my boss. Did say yes eventually - three years later though and we just celebrated our 13th anniversary."

CelticMara: "Because it was a drunk, homeless guy in Times Square asking if I'd marry him on a bet."

empressbunny: "First proposal: we broke up after 5 years and he thought proposing would have me running back to him. Uh. No. Second proposal: we were never actually together because he get waffling about what he wanted. Calling me drunk to profess his love, talking sober like it was all a joke. After stringing me along for a month or 6, I warned him I'd move on. He didn't believe me. I moved on. He called me 26 times and proposed. I told him no. He said that if I had ever really loved him, I would have waited. I told him that if he ever really loved me, he would have had no trouble committing to a relationship."

meltedsnowflake: "Because we'd been talking for a total of 15 minutes on Facebook and he was wanting to move to the US and have my American children (And a green card)."

in_the_vortex: "Because he asked me on our first date."

buzznights: "It was a next logical step for him but not for me. It was like a formula - date for 2 yrs, live together for 2 so of course the marriage comes next. I think it was more of a progression for him rather than a 'damn I better marry this girl.' I trusted my instincts and said no. Twice."

What was your engagement story?