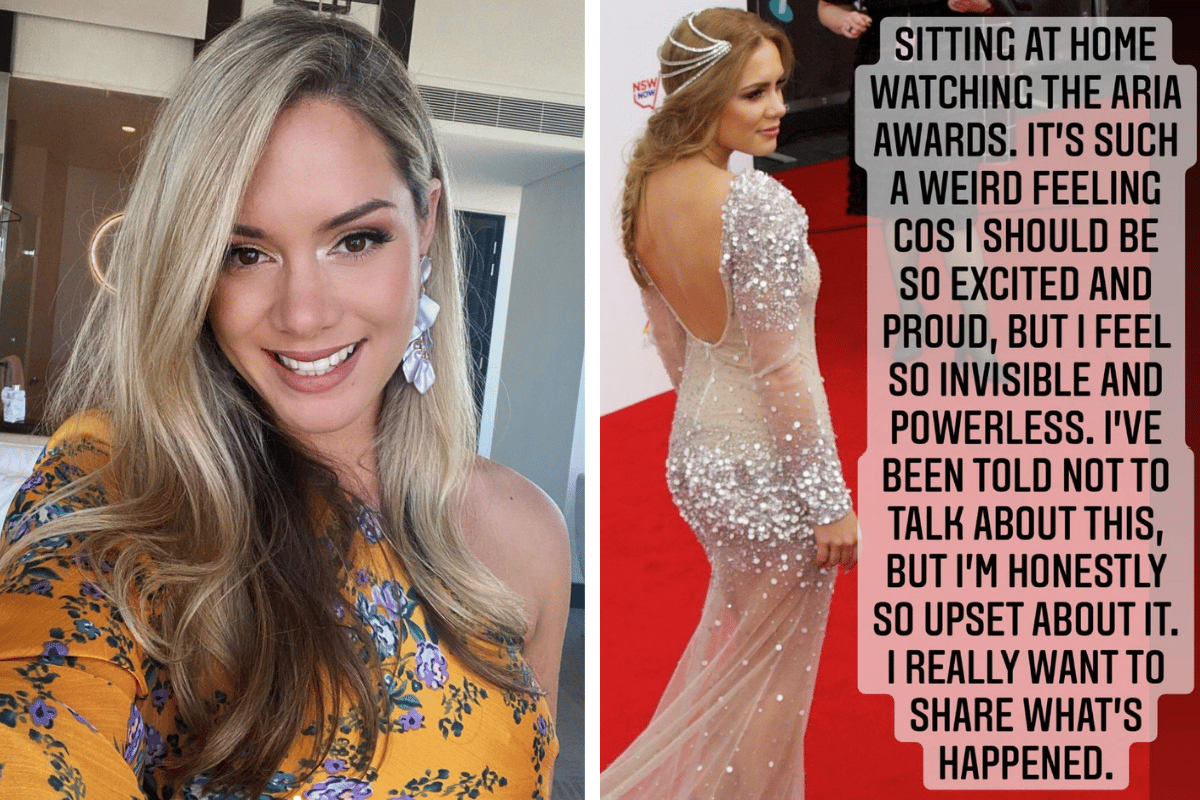 Chances are, in the last couple of months you have heard an upbeat dance remake of the Fleetwood Mac classic 'Dreams' on the radio. A cover so successful, it's earned itself an ARIA nomination.

You may even know who the artist behind the remake is, a New Zealand-born Australian-based DJ called Jolyon Petch. But what you probably haven't heard about is the woman singing the vocals on the track.

Her name is Reigan Derry, and she is alleging to have not been credited or recognised in any way, shape or form, for her work.

Reigan came forward with her side of the story this week in the wake of the song being nominated for an ARIA Award. It did however, not win the category.

On Wednesday night, Reigan was sitting at home and watching the ARIAs, describing the experience as "heartbreaking". For many recording artists, the ARIAs are where they can be recognised for their success and talent.

But for Reigan, not being invited to attend made her feel "invisible and powerless".

"I should be celebrating my only ARIA nomination in my whole life of singing, except the 'artist' Jolyon Petch refuses to credit me," she said in an Instagram post. "I have been silenced, bullied, insulted and belittled."

In the two months since Reigan asked Petch to acknowledge her work, she says she has been met with radio silence.

The 33-year-old singer says she recorded her vocals for 'Dreams' at her "home studio at her dad's house in Perth". She was working with Petch, someone she describes as both a friend and professional colleague.

During their time working on the track, Reigan says there was a phone conversation between herself and Petch, the two allegedly agreeing to a 10 per cent 'master'. When a record label controls the master rights to an album or song, they agree to give a certain percentage of the royalties from sales to the artist. In this case, Petch released 'Dreams' through record label TMRW.

But Petch allegedly didn't follow this 10 per cent master agreement. Instead, Reigan says she received only one $300 payment deposited into her bank account.

"He did not include me in the artist's agreement. I was embarrassed that I didn't get a contract written before I sent the vocals to an individual I trusted," Reigan writes.

Since the event, Reigan says she has now sought legal advice, claiming negotiations with Petch have cost her $8000 in solicitor fees alone.

It is likely a lack of income due to the pandemic's impact on the Australian arts industry has also made things tough for Reigan.

"It is crazy to think that on paper I am the most successful I've ever been (platinum sales and ARIA nominated) whilst simultaneously earning the lowest income of my entire working life."

'Dreams' so far has hit over 14 million streams on Spotify, has peaked at number 16 on the ARIA Charts, hit number one on the ARIA Club Charts and is still being actively listened to 16 weeks after its release.

So needless to say, Reigan has found it hurtful that "what could have been the biggest success of my life, has left me with nothing".

On Thursday, Petch released a statement saying "there are two sides to every story". He says that 'Dreams' was never released without Reigan's consent.

According to Petch, the pair had worked on a number of covers under the same commercial terms during lockdown.

"Reigan was aware her vocals were a paid session, to be released, and at no time have I ever received an invoice from her that stated 'Demo'. Reigan was never concerned with any of these covers, never asked to be credited, and only in the past seven weeks has Reigan raised it with me with the success of 'Dreams', and well after I had paid Reigan what was agreed upon last year."

"At every stage over the past few months we have been trying to work with Reigan and her legal team to come to an agreement, accommodating precisely her recent demands (including ongoing royalties and feature credit) even though a deal was clearly made last year," he said on Thursday afternoon.

"We thought we’d reached an amicable commercial resolution two weeks ago - so that she would be recognised at the ARIAs, across DSPs and YouTube, but we have been waiting for Reigan to sign the agreement. So I’m really surprised Reigan took this path on the eve of the ARIA’s when we had already agreed to settle this matter," he finished.

Petch says he has been sent death threats over the incident. "The past few weeks I have been the target of Reigan’s 'followers' which have now escalated to death threats. No one should ever receive death threats or abuse online."

Reigan has since posted on her Instagram story to respond to Petch's earlier statement. In the video, she says "acknowledging my vocals can be done without abusive words".

She continued: "I'm so grateful to feel a whole industry standing behind me. I do not condone abuse towards Jolyon or his record label, that type of stuff is just not on. Let decency win!"

As the sole vocalist of 'Dreams', Reigan says she is entitled to performance income via PPCA.

PPCA, which stands for Phonographic Performance Company of Australia Limited, is a national, non-government, non-profit organisation that represents the interest of record companies and Australian recording artists.

After months of negotiations between the two, Reigan says the best her lawyer could secure for her was far less than what she feels entitled to.

Listen to The Spill: Along with Bachelorette content, in this episode the ladies unpack the 2021 ARIA award nominees. Post continues after audio.

As for what happens now, time can only tell.

"I'm writing this in the hopes that musicians might learn about their rights. There have been many before me that have fought for justice in giving credit where credit is due."

"I cried for days in the feeling of being silenced after going through this ridiculous and heartbreaking ordeal. This isn't the first time this kind of situation has happened, and it won't be the last."

Mamamia has reached out for comment from both Reigan Derry and Jolyon Petch.