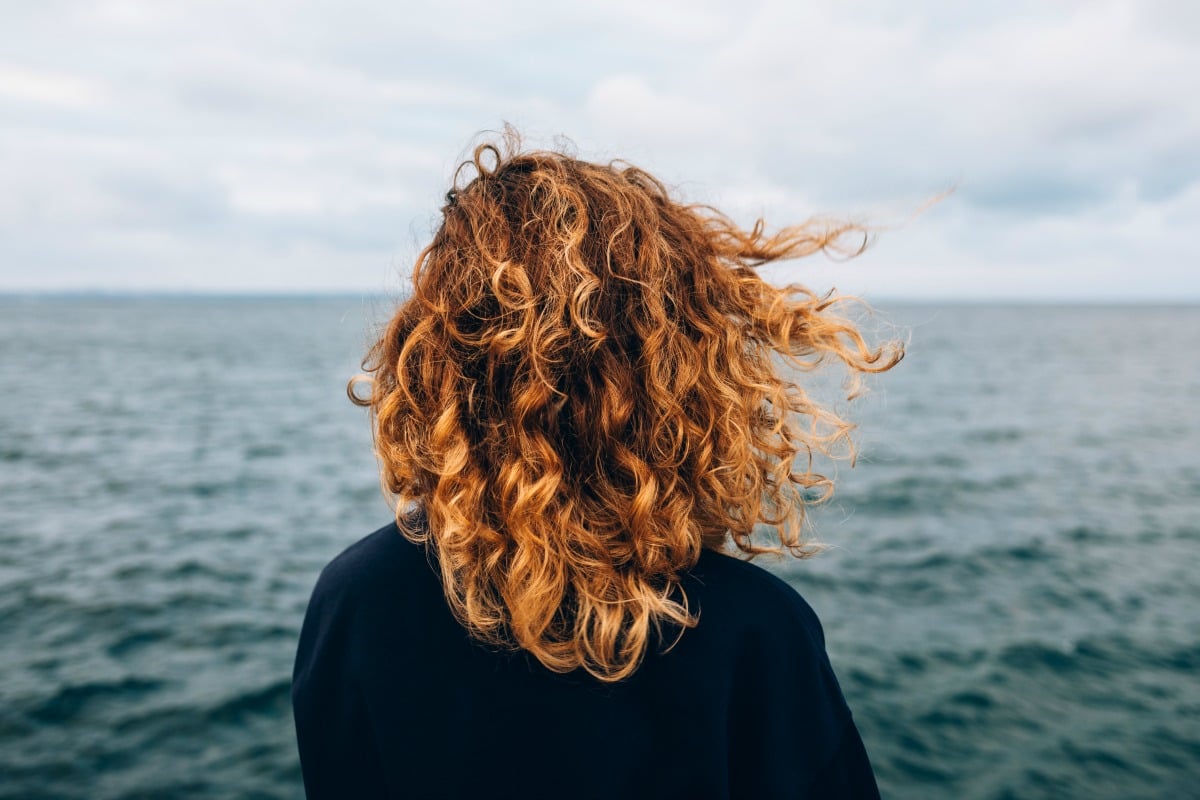 “I have some handouts I wanted to give to you,” Richard said.

We sat at opposite ends of his cramped office. I accepted the papers without needing to stretch. “Thanks,” I said, though it probably sounded more like a question.

“Have you given any thought to what we talked about last time?” he asked. His eyes were eager, hopeful.

I scanned the wall to my left, lined with filing cabinets and banker’s boxes filled with so much paper, before my eyes finally and reluctantly rested on him. “Not really,” I said. “I mean, it makes sense, but I’m not really sure how it’s supposed to help.”

He nodded to the papers, now rolled in my fidgeting hands. “Take a look.”

Self-conscious, I unrolled them and tried to scan the information. There was a heading. There were some bullet points below. But I wasn’t absorbing anything. This wasn’t why I’d come here.

Listen to Mia Freedman's chat with Maz Compton on No Filter. Post continues below.

I was 26 and in my fourth year of teaching kindergarten, and I didn’t really have any problems, except for one: My mind just wouldn’t stop. Since I’d begun my career, I didn’t feel like I’d got any rest at all. I’d go to sleep at night, have one seemingly continuous and lifelike dream, and then wake up the next morning more exhausted than ever.

I was short-tempered with the kids, and could think of nothing else but going home and going to bed on any given day.

But I couldn’t rest, because I was constantly thinking about something, mostly how to design and teach the lessons I was responsible for delivering to the room full of five-year-olds I’d been charged to care for and educate. I lesson-planned in my head as I drove to and from work, as I worked out at the gym, as I showered, and as I fell asleep at night. I couldn’t even escape my thoughts long enough to have good sex.

And so, I thought, maybe there’s something I need to look at. I threw a dart at my insurance company’s list of approved mental health providers, and Richard was the lucky bullseye.

In our first session, I’d run down my list of grievances from a childhood that I felt had failed me. After hearing me out, Richard had tossed out a phrase and asked if it resonated. “Have you ever heard of Adult Children of Alcoholics?” he’d asked. I hadn’t. He’d gone on to describe some characteristics of Adult Children as I nodded along. And here he was today, giving me a stack of literature about it.

Sure, I fit the description. But I hadn’t come here looking to heal from my childhood. I’d turned out just fine, after all. I could hold down a job and pay my rent. My relationship was mostly okay. Sure, there were some things in my past. But that was the past. I didn’t need to go back there. I didn’t want to.

I’d sought therapy so I could learn to turn off my intellectual mind and exist outside of my racing thoughts.

Going back and dissecting my past, inspecting my multitude of other dysfunctional behaviours, wasn’t on the menu. Still, Richard didn’t seem to be able to let go of the idea that my identity as an Adult Child needed discussing.

I nodded through this second appointment, arms crossed over my chest, avoiding eye contact. The papers survived as far as the first bin I passed on the way to my apartment.

A label as a useful place to start.

It was almost exactly a decade later, in another therapist’s office, that this term came back to me. I was explaining my childhood, describing my parents’ proclivities and my feelings having grown up in their house.

I suddenly recalled my appointment with Richard all those years ago, and that term — Adult Children of Alcoholics.

I mentioned it to my therapist, who shrugged. “Whatever label you want to put on it,” she said, and then reminded me to come back to the facts we knew — the fact that my feelings of loneliness and guilt were the main drivers for my dysfunctional behaviours, and the fact that I’d developed those feelings at a very young age as a result of my relationship with my parents, particularly my mother.

At the moment, I was okay with foregoing the label. After all, with a label often come a narrow set of criteria and a strict prescription for overcoming them.

However, now that I’ve untangled a lot of the web of emotions that formed my warped self-concept, I find it both validating and instructive to reflect on my identity as an Adult Child.

I hope others like me, whether or not they accept the label, will see themselves in my story and know that they’re not alone.

In a nutshell: I prioritise others over myself.

Adult Children of Alcoholics and Dysfunctional Families, I’ve learned, is actually a 12-step program that was borne from Alateens, a fellowship of young teenagers, whose life has been affected by someone else's drinking. As its founder, Tony A., states in 25 Questions: Am I an Adult Child?,“Adult Child also means that when confronted, we regress to a stage in our childhood.” Though I couldn’t have acknowledged this at 26, I now realise it’s a pretty apt description of me.

There are 14 traits of an Adult Child, also known as the Laundry List, and as I write this, I am aware of the danger of labels mentioned above — that one might find herself forced into a pathology and treatment box.

However, looking at these lists has illuminated some of my behaviours and personality traits, and where they originated. Having this rational knowledge isn’t everything, but it’s one step towards being able to interrogate and dismantle the dysfunction when it comes up.

My experience of the 14 traits can be summarised in one sentence: I prioritise others over myself.

Growing up as an only child in a home where alcoholism, apathy, depression, anxiety, and neglect were ever-present meant that the people around me were unreliable sources of nourishment, both emotional and physical.

Because I was often left to my own devices and my emotional needs weren’t met, I didn’t believe I was worthy of affection or esteem* and was terrified of abandonment and being alone*.

Thus I concerned myself with making things perfect and easy for others*, ignoring my own emotions* as I focused on saving or rescuing others*, winning their approval*, avoiding conflict**, and making everyone around me comfortable. I had no identity of my own because I spent my entire life making things perfect for everybody else.

What I call my trust compass was also terribly faulty and hasn’t fully recovered. I often pushed away stable friends and partners who were good for me in favour of the endorphin rush* of a new relationship, which often ended up being detrimental to my mental health*.

Eventually, I would exit the toxic relationship, but then I would feel even more alone and unworthy and the people I’d pushed away before would seldom have the energy to incorporate me into their lives again.

My identity as a child of dysfunction, and later as an Adult Child, can be seen in some isolated incidents over the years.

There was the time when someone I thought was a close (platonic) friend exposed himself to me and I didn’t ask him to leave my house (or call for help) immediately.

There was the time when my cousin locked me in a dark shed with him and a huge kitchen knife, telling me all the ways he could kill me as I begged him to unblock the door, so I could leave, and I never told anybody. There was the time I broke down crying to the guy I was dating (one of the really good ones), spouting some incoherent nonsense that amounted to my fear of abandonment, and scared him away for good.

And then there were the relationship dynamics I developed over time.

I was indiscriminate with my trust and affection; since the people I’d loved growing up had also neglected and hurt me, I didn’t know how to tease out the good from the bad.

I had no close friendships, because I didn’t know how to learn about others if it wasn’t to protect myself against them. I knew my boyfriends and their behaviour patterns very well, because I was constantly having to tiptoe around them, playing an eternal game of emotional Twister in order to prevent a blowup. But I knew startlingly little about other people in my life, even the ones I considered to be my closest friends.

Communication was always difficult for me; I tended to talk about people (loudly) behind their backs rather than address them directly when I had a problem with them. And if it was suggested that someone (usually another girl) didn’t like me, I’d go immediately on the offensive, calling them names and projecting my own self-loathing onto them rather than looking inward and trying to examine my own actions.

In retrospect, it seems I hadn’t been as happy and well-adjusted as I’d thought, sitting across from Richard that day in 2008.

Recognising my traits helped me to grow out of them.

If I’d had close friends or family members who watched my relationships, they might have said something like, “Stop dating guys who need saving,” or, “You don’t need to try so hard. We love you already.” Occasionally my inner self played at making these assertions, to no avail.

The problem is that these traits were so firmly ingrained in my psyche that I couldn’t see them for what they were, and I certainly couldn’t change them on a whim.

They are things that worked to protect me when I was too little to communicate or understand, and I carried them through to an outwardly well-adjusted (but inwardly deeply dysfunctional) adulthood. There was no easy button, no switch I could flip to suddenly stop doing what I’d been doing all my life.

Thankfully, even without using the label of Adult Child, I was able to address and dismantle these underlying dysfunctions in therapy. Knowing why I fear abandonment and seek approval gives me a counter-narrative to fall back on whenever I find myself starting to initiate my old operating system.

And, now that I have finally looked at the paperwork Richard tried giving to me all those years ago, I feel validated, seen, and just a little less alone. I hope my work can do the same for you.

*Each asterisk represents a distinct trait from the Laundry List. I ended up identifying strongly with a whopping ten out of 14.

Nikki is a career educator from Massachusetts, USA. She’s passionate about social and educational equity as well as children’s rights and mental health empowerment. When she’s not writing at the local independent coffee house, she can be found lifting weights, playing fetch with her pup, or trying her wits at an escape room. She lives with her partner and children just outside Boston. You can follow her on  Instagram, Twitter and Facebook: @NikkiKayAuthor.