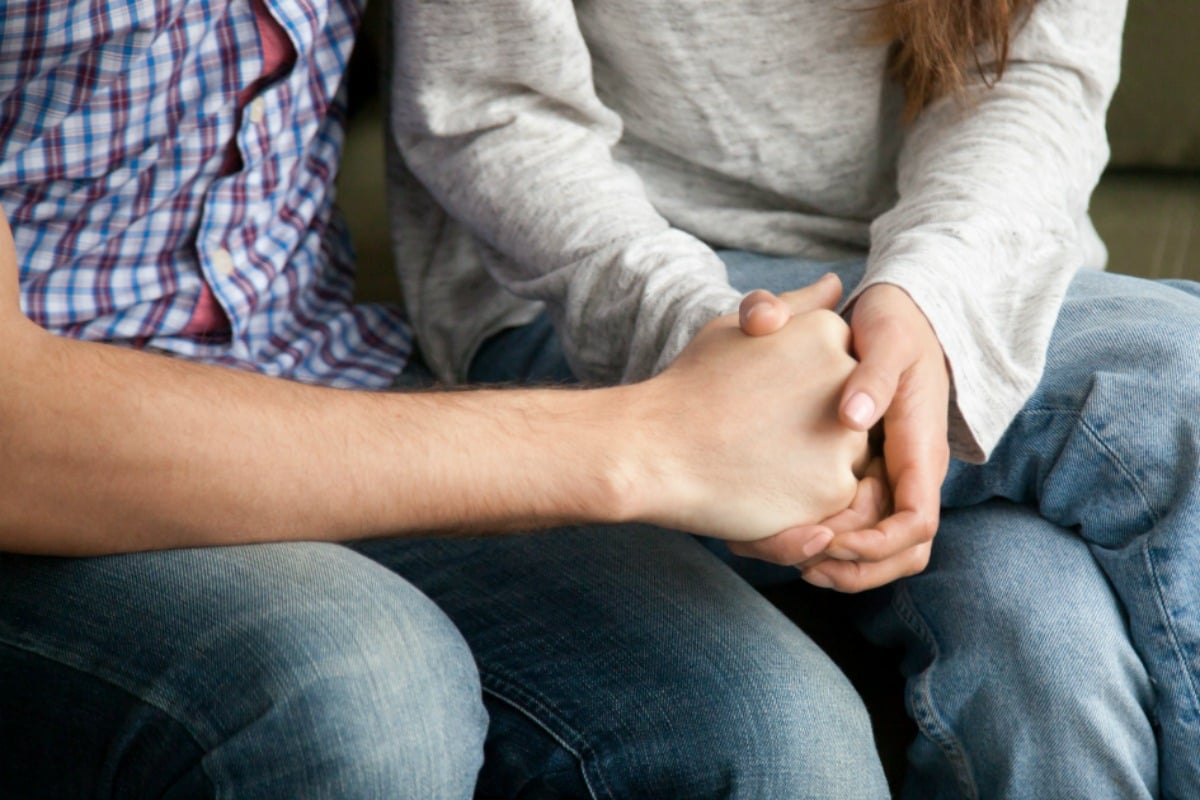 There’s a circular bed under one of the bay windows. Otherwise, it’s a pretty normal living room. Couches, a few sparsely populated bookshelves. One set of the windows look out onto the road, at the traffic that whizzes by, the buses and commuters. They leave their curtains open.

I’m seated on a couch with Miri, and Ben is in an armchair across from us. On the windowsill next to me, my tea casts a shadow on the glass.

“Have you ever done anything like this before?” Miri asks.

“Not sober,” I tell her, which is the truth. Miri and Ben cast each other a look. Theirs is a dry home, one of the many things that make it a curious establishment to me.

WATCH: How to have better sex. Post continues below.

“We can, um. Go grab a bottle of wine or something?” Ben offers. It’s a concession they’re willing to make, but I can tell they both feel a little uneasy, the way their eyes keep meeting, trying not to meet.

“No, it’s ok. Adults, like, take ownership of their wants, right?” And they laugh, thank God, they laugh because I feel so weird and uncomfortable, like my own desire is an unwieldy thing. But it’s true. I do want to be there.

It’s then that Miri kisses me.

This is my second date with Ben, but my first with Miri. A week prior, Ben and I met at a café in Rockridge, near my apartment, for coffee. We’d met online-they’d messaged me from an account that looked like it was Miri’s, but listed pictures of both of them. They’re a gorgeous couple, married for years. Both of them appear squarely outside my league. So when, on our first date, Ben told me he was a competitive triathlete, I just laughed. Of course he was. But when he told me they were both sex therapists, I was genuinely surprised.

I asked a lot of questions, but I still don’t really understand what their session to session work life is like. Nor do I completely understand the reason for having the circular bed in their living room. That’s where they practice, that much is clear. This is also where we all have sex together.

Adam, my then-boyfriend, now-fiancé, also had a lot of questions. He was curious about the mechanics of our encounters, down to the smallest detail, and not for the reasons I initially suspected. I suspected it aroused him. Ultimately, I learned, it was his way of trying to understand my desires.

At the time, we were still trying to be polyamorous—having realised we were in love, but also dubious of monogamy—and while the endeavour made us both uncomfortable we were also both deeply invested in seeking an arrangement that suited us. Honestly, and wholly. And part of that entailed being honest about the need for varied sexual attention.

Coincidentally, Adam is also neighbours with Ben and Miri. Now, since I’ve moved in with Adam, we’re all neighbours. I’ve only seen Ben once, fleetingly, in the market. I could tell he saw me too, in a moment of passing. But it was truly momentary, and we passed like people on the street pass one another daily, with only a flickering spark of recognition.

“Whenever we find a new girl,” Miri tells me, on maybe our fourth date. “She always ends up getting married. And then we have to find a new one all over again. It’s such a pain.” She only has the energy to date women sporadically, that much Ben makes very clear—and it had been quite a dry spell, dating wise for them as a couple. He’s excited she’s willing, again. But from the sound of it, there have been plenty of us, over the years.

LISTEN: How to jumpstart a dead libido. Post continues.

“All she wants is for someone to go shopping with,” Ben says.

Miri smiles. “And to fuck.”

What she actually wants, I’m learning, is for someone to keep Ben company. She wants to go shopping and fuck, too. But much of the time, dates start or end without her there. She has a hair appointment. Or a friend in town. She’s much busier than he is. And while Ben is congenial, and perfectly pleasant, I start to get the feeling that he’s a little bored. Much of his time is spent keeping house for Miri, who makes more money than he does (they’re both so frank about this fact), and so Ben is responsible for keeping the house clean, getting dinner on the table. And also, finding and vetting unicorns.

I like sleeping with them. After each date, I feel the urge to call someone, to tell them what I just did, to brag. That I wanted to do something that seemed porny, unattainable, and weird.And I got it. I’m getting it. I’m getting it on the regular. It’s the most overtly sexual life choice I’ve ever made, and it’s fun.

I am less sure that I want to be Ben’s entertainment when Miri isn’t home, however.
ADVERTISEMENT

“Your energy is different,” Adam tells me. From anyone else, this would elicit an eye-roll from me, but it rings with the tenor of truth from him. It’s true. I’m emboldened by my ability to get what I want, and it translates to how Adam and I sleep together, too. Because if I can arrange for regular threesomes, what CAN’T I do, really, when it comes to sex? This, I tell him. I want this. I want it this way. I want to do this, to you. And he and my body reward me for it.

It wasn’t, I learned, the threesomes that I most craved. They were fun, but already, about a year later, I don’t remember them that well. If you asked me, specifically, what we did, I could probably only provide you with the broad strokes. What I really wanted, what I really craved was ownership of my own sexual desire, in a context free of pretense.

But we are hungry. I am hungry. And what a relief it is to feed.

My relationship with Miri and Ben fizzled out. Or rather, like an immature asshole, I stopped returning text messages. It only took two unanswered texts before I never heard from them again. My guess, but not my excuse (there is no excuse, only the explanation of cowardice) is that they have played this game before. My disappearing act was not a novelty to them.

My relationship with Adam, on the other hand, escalated. Quickly, joyfully. I think often about what Miri said, about how the women they dated always got married right after. With a new engagement ring on my finger, I wonder if dating a couple may be a really great way to transition into a more serious level of commitment with a partner. I intimately witnessed the interactions of a pair who own and share their sexual desires, without pretense, with one another. I slept with them as a unit, not as two separate people. I enacted their desire, and found the assurance I needed to command my own.

More than that, I learned to actively seek the satiation of my own appetites.To face the truth of my own cravings, and to make the fulfilment of them manifest in the world—even just to speak to them, to call them by their name.And this new skill has made my ability to handle a wholly honest relationship with Adam attainable.Currently we’re what’s known as monogamish—we sporadically invite people to join us, but don’t date or act without one another.

Adam often texts me while I’m at work—he works from home—usually practical things, often logistics. Today is no different. “Ashley is coming over Sunday,” he says, and I smile. We are hungry, now, together. And it feels so good to be full.

This post originally appeared on Ravishly and was republished here with full permission. For more from Ravishly, check out:

I’m Never Going To Be A “Good” Polyamorous Person

Ask Erin: Does My Boyfriend Want A Polyamorous Relationship?