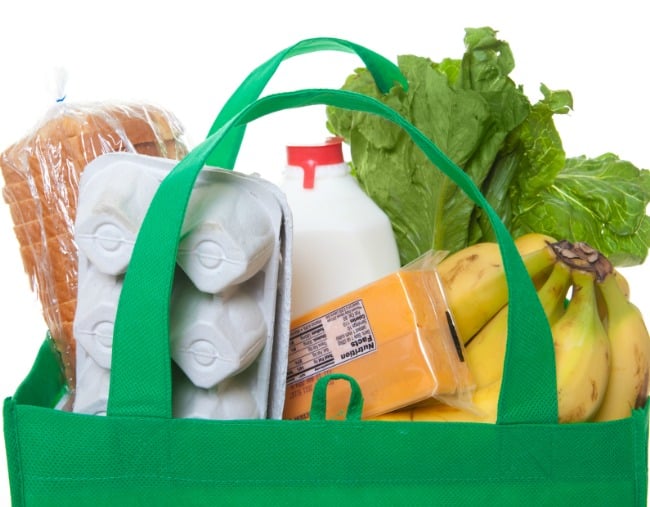 The days of flimsy plastic shopping bags floating around the place are over. People all around Australia are going to have to start remembering to bring reusable bags with them when they go to the supermarket – or buy bags once they’re there.

But for years, stories have been circulating about the amount of bacteria found in reusable shopping bags. Is it safe to reuse the same bags for groceries over and over?

Lorraine Haase, the spokesperson for Food Standards Australia New Zealand, doesn’t think people need to panic about it. She says the key is to keep different types of food in different bags. Raw meat and other cold products should go in a chiller bag, not in the same bag that’s used for fruit and vegetables.

“You don’t want juices from a chicken leaking onto a lettuce,” she tells Mamamia.

Haase says people need to keep an eye out for any spills or leaks inside bags – in particular, raw meat or broken eggs.

“If I see any kind of leakage I throw the bag away or I give it a wash,” she says.

“If you’re buying produce with a bit of dirt on the outside, again, it’s just about checking the bag afterwards and maybe giving it a bit of a wash,” she adds.

Haase says if people are keeping different types of food separate, the risk of contracting food-borne illness from reusable shopping bags is “quite low”.

So when does this whole plastic bag ban start?

If you live in South Australia, this is old news. Single-use plastic bags were banned back in 2009. The ACT, the Northern Territory and Tasmania followed SA’s example. The bags will be banned in Queensland and Western Australia from July 1. Victoria has announced that a ban is on the way. There’s no ban planned for NSW just yet, but big supermarket chains, including Coles and Woolworths, have decided to get rid of single-use plastic bags nationwide anyway. For Woolies, the bags are gone as of today. For Coles, it’s happening July 1.

What if you forget to bring your own bags?

In Woolies, you can buy a Reusable Bag – a more durable plastic bag, made from 80 per cent recycled material. It’s the same deal in Coles, only it’s called a Better Bag.
If you want something a bit more solid and longer-lasting, Woolies has the Bag For Good, with profits from the first 12 months going to a landcare program. A chiller bag is also available. In Coles, you can buy a range of Community Bags, including a jute bag and a chiller bag, with a portion of the cost going to community groups.

How much will they cost?

Not much. Reusable Bags and Better Bags are only 15 cents. The Bag For Good is 99 cents, and chiller bags will cost a little more.

Steady on. Have you thought about using bread bags for dog poo? Perhaps not using a bin liner in the bathroom bin? South Australians have been coping since 2009, remember.