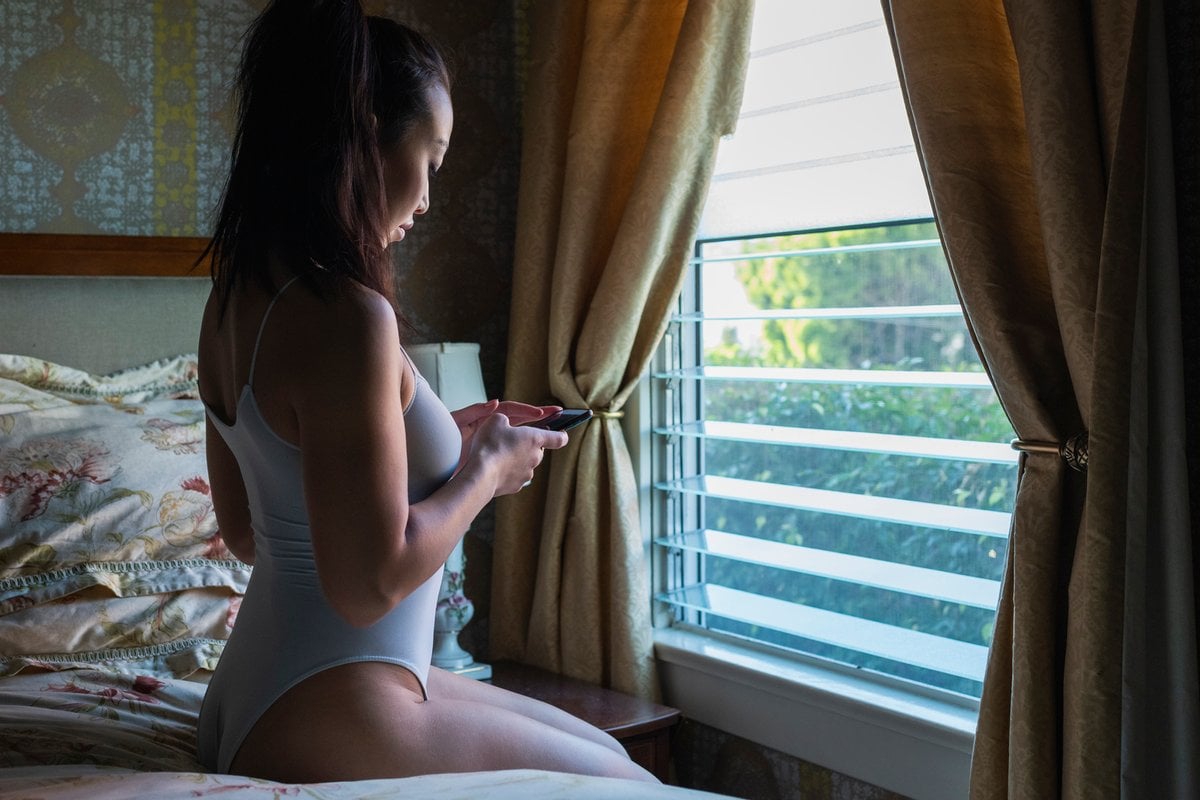 Things with Michael had been so deliciously sexual from the start.

And to be honest, I am entirely to blame.

It was during the sex banishment of lockdown one that I decided to give my dating apps an overhaul.

Apparently while my friends were using the downtime of a global pandemic to move in together and pop out babies, I just wanted a good time.

So I made a few changes and hey presto, I was officially "looking for fun."

I matched with Michael a few days later and things got dirty real fast. Before long he was telling me all about this girl he’d had a couple of threesomes with.

Then he sent me photos.

Six pictures of the most gorgeous blonde, each one sexier than the last.

In a final black-and-white image, she lay on her side, turned away from the camera – wearing just suspenders and stockings.

I’d always fantasied about being with another woman, and I was instantly turned on.

"Monika likes to watch," Michael added. "And I would definitely like to watch you two as well."

While I’d been daydreaming about the three of us in bed together, Michael introduced me to voyeurism and his ultimate fantasy.

"I want to watch a woman I find super sexy being f**ked in front of me, while she enjoys turning two guys on at once," he told me.

By the time that lockdown ended, we’d worked ourselves up into a sexting frenzy.

And there was no controlling us.

On the first night we met, we crept into a dark park and got each other off in the bushes.

At our second meeting, we had sex all over his flat, before jumping online and inviting another man to join us.

Or rather, join me.

While I had sex with a stranger on Michael’s couch, he watched on, getting off on seeing me get f**ked.

It was one of the wildest nights of my life. I loved every minute of it. I was hooked.

And then lockdown number two hit like a punch in the vagina.

Listen to Mamamia's The Undone, a podcast about navigating the "adult" world without a GPS, friendship, love, sex, personal politics, and... air fryers. Post continues below.

Desperate for any form of human connection, let alone sexual intimacy, Michael and I began calling each other.

And, just like our text messages, it quickly turned filthy.

"I like the idea of you being dressed in lingerie with just a long coat on top," he told me on the phone one night, "and we go out to meet a guy."

"Where we would we meet him?" I asked.

"In a dark alley," Michae' said. "Under a light so I can see his reaction to your sexy body when I open up your coat."

I slipped my hand between my legs and started rubbing my clit.

"He grabs your boobs and p***y, squeezing them tight," he continued. "Then you reach into his pants and pull out his huge hard c**k."

I murmured into the mouthpiece with my eyes closed, picturing every second of it.

"Yes," I breathed, working myself up.

The scene materialised in front of me.

The one down a dark alley, as well as the other on the end of the line.

After so much fun in person, Michael knew every one of my sexual desires, and what I needed to hear in bed.

Phone sex with him was on another level.

My fingers move quicker over my clit.

I was getting so close.

"Oh, that’s so hot," I whimpered, as Michael continued to describe his fantasy.

And with that, I let go, orgasming into the phone just as I heard him release, groaning down the line.