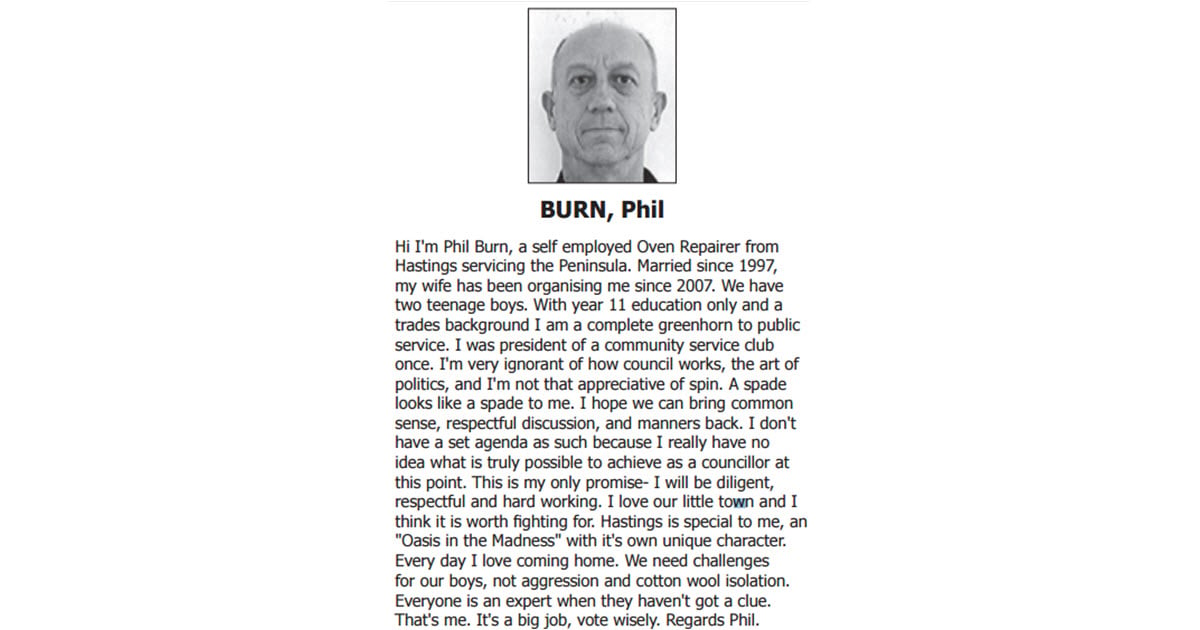 It’s not often you come across a politician willing to admit they haven’t got all the answers, but Phil Burn might be exactly the man this country needs to cut through the endless spin.

The self-employed Oven Repairer from Hastings in Victoria has put himself forward as a candidate in the upcoming local council elections.

His platform has no bells nor whistles. He’s a straight-talking sparky, who loves his town and has had it up to here with know-it-all suits.

“I’m very ignorant of how council works, the art or politics, and I’m not that appreciative on spin,” he admits in his brutally honest campaign statement.

“A spade looks like a spade to me. I hope we can bring common sense, respectful discussion and manners back,” he says.

“Everyone is an expert when they haven’t got a clue. That’s me. It’s a big job, vote wisely.”

Phil also explained his decision to run for the Mornington Peninsula Shire council to friends and family on his Facebook page: "I read that nominations were open last week and I thought, 'Why not?'"

Now, the self-described "knockabout, larrikin Aussie bloke" is feeling somewhere between "bloody terrified" and "bouncing off the ceiling with excitement".

"If it comes as a surprise to you, imagine Carolyn's reaction. 'Everyone hates the councillors, why on earth would you want to do that for?'" he writes.

"Deluding myself that I can make a positive difference maybe?"

Phil says he reckons instead of whining about politicians, people should be more "fair dinkum", face their fears and "have a go".

"I'm just a sparky and I reckon there are too many suits telling us what to do," he says.

He also makes a Bruce Springsteen reference, so you know he's legit.

"I feel very uncomfortable in a suit."

Okay look, we're not 100 per cent behind Phil's traditional views on men and women, but geez, he sure is honest. And let's be real, they could use a little more of that in Canberra.