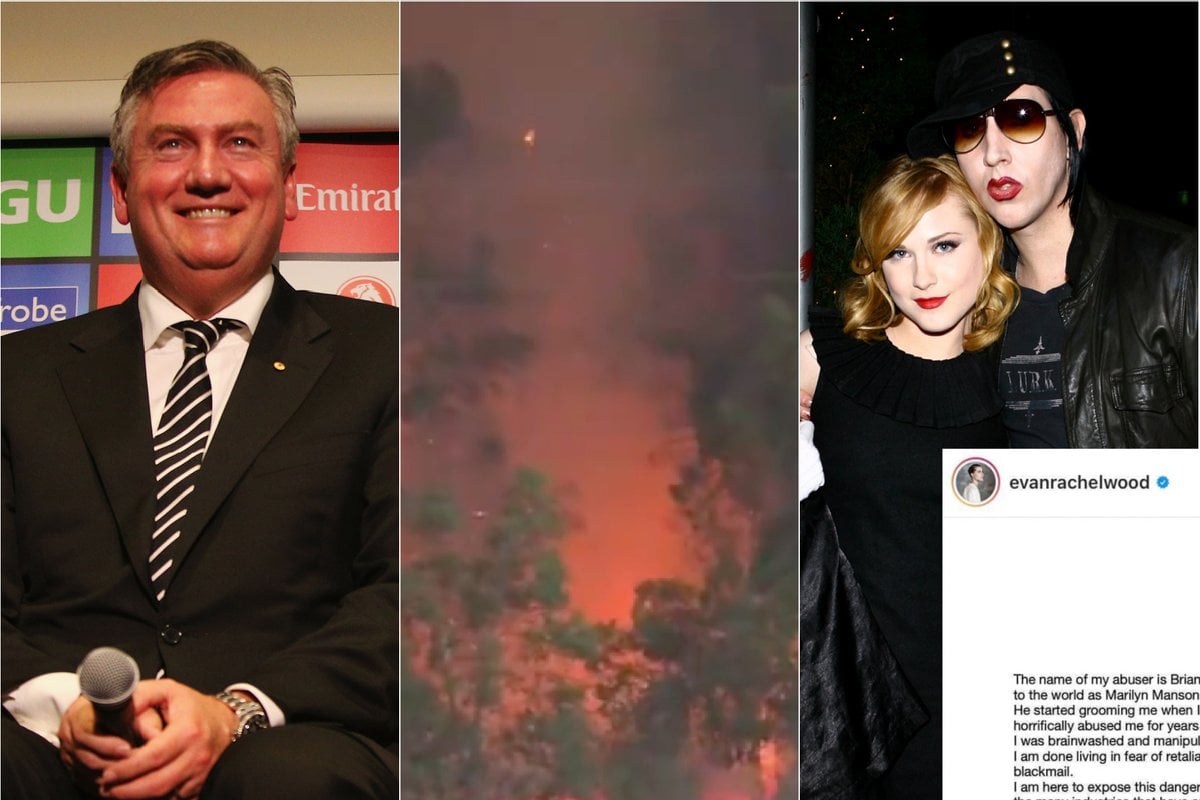 An out-of-control bushfire burning near the Perth Hills has engulfed at least seven homes and threatened more, with some locals told it was too late to leave.

A firefighter has been injured, suffering minor burns before returning to fight the blaze, which has raged through the night near the town of Wooroloo.

Western Australia's Department of Fire and Emergency Services (DFES) issued an emergency warning for the blaze early on Tuesday, expanding the warning area.

A bushfire emergency is unfolding east of Perth, with seven homes believed to be lost and more under threat. #9Today pic.twitter.com/IdW0eZAy5r

DFES told people in Brigadoon to flee if the way was clear to the west, while others on nearby O'Brien Road were told it was too late to leave.

"You must shelter before the fire arrives, as the extreme heat will kill you well before the flames reach you," the warning said.

The bushfire was unpredictable and weather conditions were rapidly changing, the warning said, urging people to stay vigilant.

The fire reportedly claimed a number of homes on Monday night, and was burning close to a number of other properties.

Wooroloo falls into the Perth Metropolitan area which is subject to a five-day lockdown due to a COVID-19 community outbreak.

Test results over the coming days are set to reveal whether Western Australia has dodged a bullet with its COVID-19 outbreak.

No new cases were detected on Monday after a hotel quarantine breach forced metropolitan Perth, the Peel region and South West into a five-day lockdown.

WA's government took the drastic step after a security guard at the Sheraton Four Points hotel in Perth's CBD contracted the highly contagious UK strain, then attended more than a dozen venues over several days while infectious.

More than 3100 people were tested on Sunday, most later in the day after the lockdown was announced.

Authorities expect most of the guard's close contacts will have been re-tested by Wednesday, providing clarity as to whether the lockdown is likely to end as scheduled at 6pm on Friday.

Authorities have identified 66 close contacts of the man dubbed "case 903". They have been ordered to self-isolate.

Eleven "high-risk" contacts, including his three housemates, are in hotel quarantine.

Actor and activist Evan Rachel Wood has accused her ex-fiance Marilyn Manson (also known as Brian Warner) for grooming her when she was a teenager and horrifically abusing her for years.

In an Instagram post on Monday morning, Wood says she was "brainwashed and manipulated into submission. I am done living in fear of retaliation, slander, or blackmail. I am here to expose this dangerous man and call out the many industries that have enabled him, before he ruins any more lives. I stand with the many victims who will no longer be silent."

Breaking news: In a show of solidarity, Evan Rachel Wood and at least four other women make new allegations of abuse against Marilyn Mansonhttps://t.co/yLPWSgJDA7

At least four other women have since posted their own allegations against Manson, with experiences including sexual assault, psychological abuse, violence and intimidation.

Vanity Fair reports Manson's representatives were not immediately available for a comment, but his team has “categorically denied” similar accusations in the past.

Collingwood has vowed to implement all 18 recommendations from a damning report that found the AFL club guilty of "systemic racism" and urged significant changes to ensure it eliminates that toxic culture.

Long-standing Magpies president Eddie McGuire on Monday acknowledged calls for him to step down immediately after the report was made public, but declared its findings had only strengthened his resolve to see out his planned final year at the helm.

The independent report found racism at Collingwood had resulted in "profound and enduring harm" to First Nations and African players, and that the club's response has been "at best ineffective or at worst exacerbated the impact of the racist incidents".

Indigenous former Collingwood player Tony Armstrong has slammed the Magpies’ response to a damning report that uncovered “systemic” racism at the club as president Eddie McGuire insisted he would not resign despite the findings https://t.co/fbYojBL73V

Some of the racist incidents highlighted in the report, which was triggered last year by a series of claims made by 2010 premiership player Heritier Lumumba, involved McGuire or occurred under his watch as Collingwood president.

McGuire admitted the club had "got things wrong" in the past and said it will learn from its mistakes.

"I don't think there's any shame or disappointment in what's going on here," McGuire said. "This is a day of pride … this club is standing for something significant in this area and is actually putting in place the mechanisms to make a difference."

Lumumba commented via Twitter late on Monday night, describing Collingwood's press conference as a "bizarre response" to the report and slamming McGuire's attitude towards its findings.

"The report clearly states that during Eddie's tenure as CFC president, the club's racism resulted in 'profound and enduring harm' to many individuals, families, & communities," Lumumba tweeted.

"It was disturbing to see how easily Eddie and the CFC board members reduced the severity of this 'profound and enduring harm' to mere 'mishaps' - as if they were talking about spilling tea on a couch rather than being found guilty of years of systemic racism."

The report found there had been a consistent pattern of Collingwood failing to adequately address racist incidents and an absence of internal avenues for reporting racism in the club until very recently.

Actor Duston Diamond, best known for playing Samuel 'Screech' Powers on Saved By The Bell for 13 years has died from cancer at the age of 44.

A statement from his agent to PEOPLE read: "We are saddened to confirm of Dustin Diamond's passing on Monday, February 1st, 2021 due to carcinoma. He was diagnosed with this brutal, relentless form of malignant cancer only three weeks ago. In that time, it managed to spread rapidly throughout his system; the only mercy it exhibited was its sharp and swift execution. Dustin did not suffer. He did not have to lie submerged in pain. For that, we are grateful."

'Saved by the Bell' star Dustin Diamond has died aged 44, only weeks after he was diagnosed with stage 4 lung cancer.https://t.co/WEBqBtifzO

Diamond also starred in a handful of reality television series including the 5th season of Celebrity Fit Club, The Weakest Link and Celebrity Boxing 2. He made cameo appearances in films such as Made (2001), Dickie Roberts: Former Child Star (2003) and American Pie Presents: The Book of Love (2009).

The deadliest month yet of the coronavirus outbreak in the US has drawn to a close with certain signs of progress: COVID-19 cases are plummeting, while vaccinations are picking up speed.

The question is whether the nation can stay ahead of the fast-spreading mutations of the virus.

The US death toll has climbed past 440,000, with over 95,000 lives lost in January alone. Deaths are running at about 3150 per day on average, down slightly from their peak in mid-January.

The deadliest month of the coronavirus outbreak in the U.S. ended with signs of progress: cases and hospitalizations are down and vaccinations are picking up speed. The question now is whether the U.S. can stay ahead of the virus' fast-spreading mutations. https://t.co/DxGVCmGlMS

But as the calendar turned to February, the number of Americans in the hospital with COVID-19 fell below 100,000 for the first time in two months.

New cases of infection are averaging about 148,000 day, down from almost a quarter-million in mid-January. And cases are trending downward in all 50 states.

The Duke of Sussex has accepted an apology and "substantial damages" from the publisher of MailOnline and the Mail On Sunday over "baseless, false and defamatory" allegations he snubbed the Royal Marines after stepping down as a senior royal.

Harry sued Associated Newspapers for libel over two "almost identical" articles published in October, which claimed he had "not been in touch ... since his last appearance as an honorary Marine in March".

Prince Harry has settled a legal dispute with the Mail on Sunday and the MailOnline, accepting what his legal team called "significant damages" over an article alleging he had turned his back on the Royal Marines. https://t.co/kUsw6QICoE

At a brief remote High Court hearing on Monday, the duke's lawyers said Associated Newspapers have accepted the allegations were false "albeit after considerable damage was already done".

Jenny Afia, representing the duke, said Harry was donating his damages to the Invictus Games Foundation "so he could feel something good had come out of the situation".

- Australia will provide $35.7 million to help inoculate at least 1.5 million Cambodians against COVID-19 through the rollout of vaccines to be approved by the World Health Organisation.

- Donald Trump has appointed a new legal defence team as he prepares to file a response to impeachment charges of inciting an insurrection.

- Actress Angelina Jolie is selling an artwork that Winston Churchill painted and gave to US President Franklin D. Roosevelt for an estimated $2.7 million. Jolie bought the piece of art in 2011 with her ex-husband Brad Pitt.