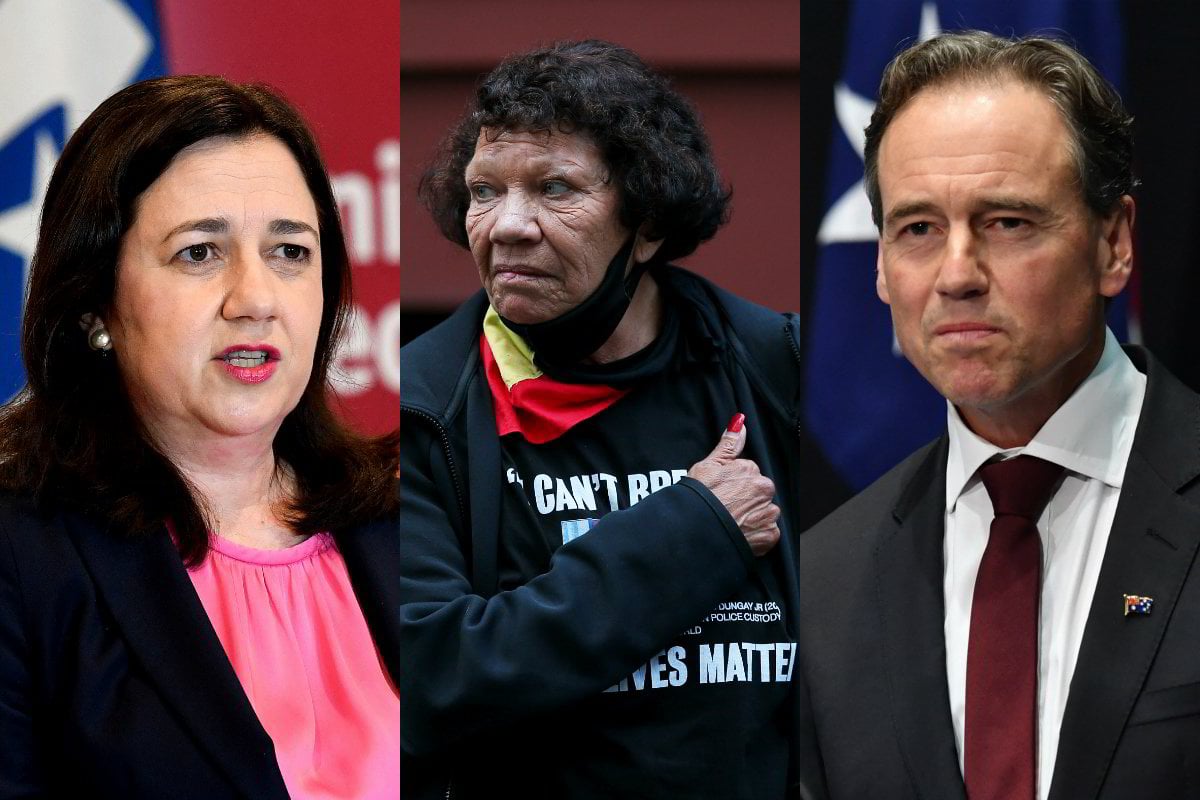 Queensland will close their borders to all of Greater Sydney.

Queensland will close their borders to all of Greater Sydney to mitigate risk of coronavirus spreading.

BREAKING: Queensland will close its borders to all of Greater Sydney. From 1am Saturday, more hotspots will be declared and no one from Sydney will be allowed into Queensland. #COVID19au pic.twitter.com/044iZeTZ1g

The news comes as NSW recorded 19 new cases of COVID-19 overnight. A cluster in Potts Point, in Sydney's east, has grown in the past 24 hours and is of particular concern, NSW Premier Gladys Berejiklian said on Wednesday morning.

Due to the increasing outbreak in NSW, Queensland Premier Annastacia Palaszczuk confirmed Greater Sydney will become a COVID-19 hotspot. The border closure will come into effect from 1am this Saturday.

On Wednesday, Queensland also confirmed their first two cases outside of hotel quarantine since May.

There are now 769 active COVID-19 cases linked to aged care facilities in Victoria.

Four of the state's six deaths on Tuesday were residents of aged care, taking Australia's death toll to 167.

The prime minister abandoned a tour of Queensland on Tuesday to rush back to Canberra for crisis talks, as fractures emerged between the federal and Victorian governments.

Premier Daniel Andrews said he had no confidence in the federally regulated private sector to protect residents during the crisis.

"I would not let my mum be in some of these places. I just wouldn't," he told reporters.

His comment sparked backlash from both Colbeck, and Hunt, who fought back tears as he declared he would not hear a bad word against staff including those that cared for his late father.

"The idea that our carers, that our nurses are not providing that care is, I think, a dangerous statement to make," Mr Hunt said.

Victoria recorded 384 new cases on Tuesday, down from a record high of 532 one day earlier.

A private school south of Brisbane has closed after an employee tested positive for COVID-19 on Tuesday evening, after returning from interstate last week.

Parklands Christian College in Park Ridge confirmed on its website it would be closed on Wednesday. Queensland Health are working on contact tracing.

The school community has been urged to monitor symptoms and isolate immediately if unwell.

Parklands Christian College in Logan, Queensland has closed after a female employee tested positive for coronavirus after returning from interstate.

It is understood a testing clinic will be set up at the Baskerville Sports Centre at the College from Wednesday afternoon.

Before the case arose on Tuesday, Queensland Premier Annastacia Palaszczuk said she would not hesitate to "slam the borders shut" if community transmission explodes in NSW.

She advised Queenslanders not to travel to NSW.

Meanwhile, south of the border a number of new pop-up COVID-19 testing clinics have been set up as the number of confirmed virus cases in Sydney continues to rise.

A new clinic opened up in Surry Hills on Tuesday, with another opening from noon on Wednesday in Rushcutters Bay Park as the Potts Point virus cluster grows.

Three new cases were linked to the area on Tuesday through the Thai Rock Potts Point restaurant and The Apollo restaurant.

Two of the cases dined at both restaurants subsequently, and NSW Health now believes this links the two outbreaks.

The two people also visited the Cruising Yacht Club Australia in Rushcutters Bay on July 23, 24 and 26. The yacht club has closed for deep cleaning.

The third new case is a staff member of The Apollo.

"With the growing number of cases in the area, NSW Health is again asking all people who live in or have visited the Potts Point area in the past two weeks to get tested if they have any symptoms of COVID-19 at all, even the mildest of symptoms such as a runny nose or scratchy throat," a NSW Health statement said on Tuesday.

Fitness First Kings Cross has been deep cleaned after a person with COVID-19 attended a class there on July 20.

Some 14 new COVID-19 cases were announced on Tuesday, with just one from hotel quarantine.

Six are linked to a funeral in Sydney's southwest and another four to Thai Rock in Wetherill Park.

NSW Health has also urged staff and patrons who went to Mounties club in Mount Pritchard on July 23, 24 and 25 and the nearby Pritchard's Hotel on July 23 to isolate for 14 days and get tested if ill. It comes after a patron who attended while infectious tested positive to COVID-19.

There were 14 new cases in NSW recorded on Tuesday with 13 locally acquired and one in hotel quarantine.

One of the prime minister's senior advisers, Nico Louw, has gone into self-isolation after learning he was a close contact of a coronavirus case in Sydney.

There was one new case in South Australia, a woman in hotel quarantine who had been allowed to cross the Victorian border for a new job. As of midnight, state authorities will now prevent South Australians from returning home and exemptions are tighter for essential workers.

Western Australia is maintaining hard border closures for all states, ruling out travel bubbles with other low-infection jurisdictions.

Five of those people - three men and two women - were handed $1000 fines for breaching public health orders, while a third woman was handed an infringement notice for offensive language.

Rally organiser Paddy Gibson was among those arrested.

Six people have been arrested attempting to participate in a Black Lives Matter rally in Sydney. One protestor was escorted into Parliament House by a Greens MP after being charged with participating in an unauthorised public assembly. https://t.co/ISrfwp4x5z #BlackLivesMatter pic.twitter.com/GUEmyKazSU

He said supporters had been asked to gather in groups of less than 20 in order to abide by COVID-19 restrictions, after failing to overturn a NSW Supreme Court decision prohibiting the protest.

"We weren't allowed to give it a run even though Westfield is allowed, as well as the casino and the NRL," Gibson told AAP.

The family of David Dungay, an Indigenous man who died in police custody in 2015, told The Project they were "intimidated" and "utterly disgusted" by the police response, which saw 400 officers arrive to handle 40 protesters.

One of the Northern Territory's most powerful police officers raped a female colleague after a night out at a ball, a Darwin court has been told.

The Supreme Court jury trial began on Tuesday for former NT Police assistant commissioner Peter Bravos, 53, who has pleaded not guilty to two counts of rape.

The alleged events occurred almost 16 years ago, after a ball in Darwin for emergency services workers.

A group of police including Bravos and the alleged victim continued partying before they were refused entry to the Darwin casino because she appeared drunk.

Crown prosecutor Nick Papas QC told the court Bravos invited her back to his Darwin house as she lived far away.

There the pair continued drinking alcohol and swam in the pool but when "Bravos made advances towards her she rebuffed him", he said.

However, after she went to sleep alone in a spare room she says she later woke to find Bravos raping her.

Both the prosecution and defence agree on those facts but one side argues it was rape and the other that it was consensual sex.

Papas said the woman was highly distressed the following day, took the morning after pill and spoke to friends, colleagues and later a psychologist, who will all give evidence.

She made a formal complaint in 2017, after speaking to people about the incident again and being told about a "black book" that existed at the time in which she featured, in which male police had "odds as to whether someone could sleep with her".

Defence lawyer John Lawrence SC said the evidence against Bravos was "based on a classic gossip, hearsay, tittle-tattle rumour mill" that developed over the intervening years since the incident.

He suggested the alleged victim might have been used as a pawn by senior police who had wanted to damage Bravos and become assistant commissioners themselves.

HBO's Watchmen dominated Tuesday's nomination ceremony with 26 nods ahead of The Marvelous Mrs Maisel's 20 and Ozark's 18.

Blanchett was nominated for lead actress in a limited TV series or movie category for her performance in Mrs America.

Jackman received his nod for lead actor in a limited TV series or movie for Bad Education.

Collette was nominated for her supporting role in Unbelievable. Snook also received her honour for a supporting performance in the TV series Succession.

Gadsby is up for outstanding writing for a variety special for Douglas.

The 72nd Emmy Awards will take place on September 20.

- German police investigating the disappearance of British girl Madeleine McCann in Portugal in 2007 have searched a garden plot in the northern city of Hannover in connection with their probe, prosecutors said. No further details have been given.

- Italy has extended its state of emergency until October, meaning Prime Minister Giuseppe Conte will continue to have the power to impose a lockdown and other safety measures without needing the approval of parliament. On Tuesday, Italy reported 181 new infections, bringing the total to 246,488, and 11 further deaths.

- Twitter has pulled a video, shared by US President Donald Trump, his son Donald Trump Jr and many of his supporters, in which members of the group America's Frontline Doctors promote anti-malaria drug hydroxychloroquine as a cure for COVID-19. The video, diseminated by right-wing website Breitbart, perpetuates unproven claims. A study conducted by Oxford University found the drug was not effective against COVID-19 in hospitalised patients, and misuse of the drug can cause serious side effects and death.