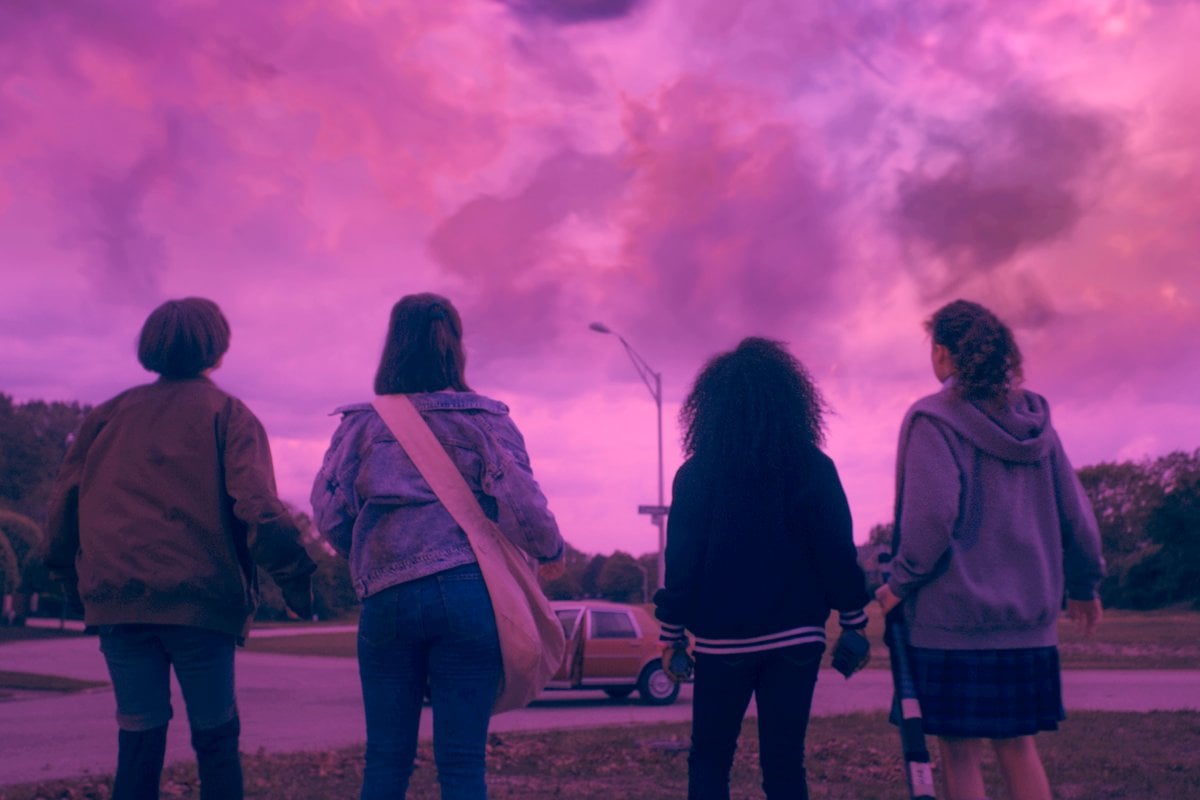 The screech of bicycle tyres. The fling of a newspaper roll thrown over a picket fence. The whoosh of pedals fading into the distance.

If those sounds are hitting a certain nostalgic button within you, then you likely grew up in the 80s.

Back then, paper rounds caused the only buzz around sleepy suburban towns – allowing homes to wake up to a fresh batch of daily printed news, and pour over it with their morning coffee, giving little regard for the teenager who delivered it at 3am.

But that's what Prime Video's new series is about: The kids behind the paper run. Or, more specifically, the Paper Girls.

However, if you think that this show is about the mundane rhythm of paper rounds, you'd be sorely mistaken.

Because on one unsuspecting morning in 1988 when the paper girls – Erin, Mac, Tiffany and KJ – team up to shake off some local boys who are trying to pester them, they find themselves caught in the crossfire of two groups of very bizarre (and very futuristic) looking people.

Why? Well, because they've time travelled, of course.

This zip into the future takes the girls on a wild journey of trying to get back to 1988 – but not before they meet their future-selves ...which we can all agree would be a rather jarring development in anyone's life.

The show is launching the careers of four rather talented teenagers, and three of them Mamamia had the chance to sit down with to chat all about the behind-the-scenes mayhem that is filming a sci-fi series. 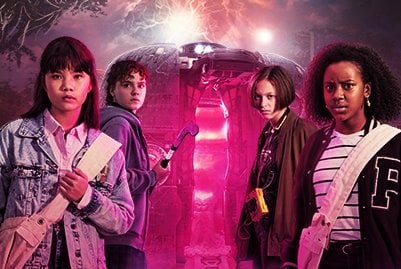 Being their 'breakout' roles on TV, we of course had to ask the girls how they found out that they had landed their parts in Paper Girls.

And, as expected, a series of adorable anecdotes followed.

"So I was cleaning my room, and my mom was downstairs," Finn explains. "All of a sudden, she starts yelling downstairs and I'm like, 'Oh, I think I got it'. And then she came upstairs and my dad was recording on his phone – which was weird, but totally gave it away. They told me and I just turned around from putting my clothes in my closet and said, 'REALLY?!' I'm so honoured to be a part of this show."

"My mom says 'Come upstairs right now I have to tell you something!' I think I blacked out after that because I just felt this long state of disbelief. It felt so surreal. I was flabbergasted!" says Riley, who also says she's so proud of herself for landing the role of Erin on Paper Girls.

"It's something that I have worked so hard for since I was young and I think little Riley would be so so happy."

Without spoiling too much about the show, we can tell you that there are some pretty thrilling moments in the series and a fair few jump-scare scenes scattered throughout.

As Mamamia's resident scaredy-cat, I wanted to know the reality of filming a spooky scene – especially when you're only 15 years old.

"In the moment, it definitely did feel scary. My heart was just racing so much and I could feel it thumping," says Riley, before laughing and sharing: "That sounds really dramatic!"

But the process of getting ready for a scary scene included a lot of exhausting prep work.

"For most of our high impact scenes, we were asked to jump up and down before every take and in between every take – or we would sprint back and forth until the takes started," says Finn. "Because they wanted our heart to be racing. And they wanted us to be like, 'Oh my god!' The feeling of being out of breath and your heart racing mimics that feeling of terror and anxiety a lot."

Beyond running around to pump up the adrenaline, the cast were also asked to scream. Yes, literally scream before takes – which was something they had to flag with their on-set guardians so they didn't panic.

"Before every single take we would have to let out the most gut-wrenching scream. Our director, Georgi Banks-Davies, just said we needed to let out whatever we were feeling in one big scream," says Riley.

Despite the screaming, Camryn managed to shake off the fear of spooky scenes thanks to her cast.

"I wouldn't say that I was scared, because for me personally, I knew that these guys had my back. That was all the reassurance I needed!" 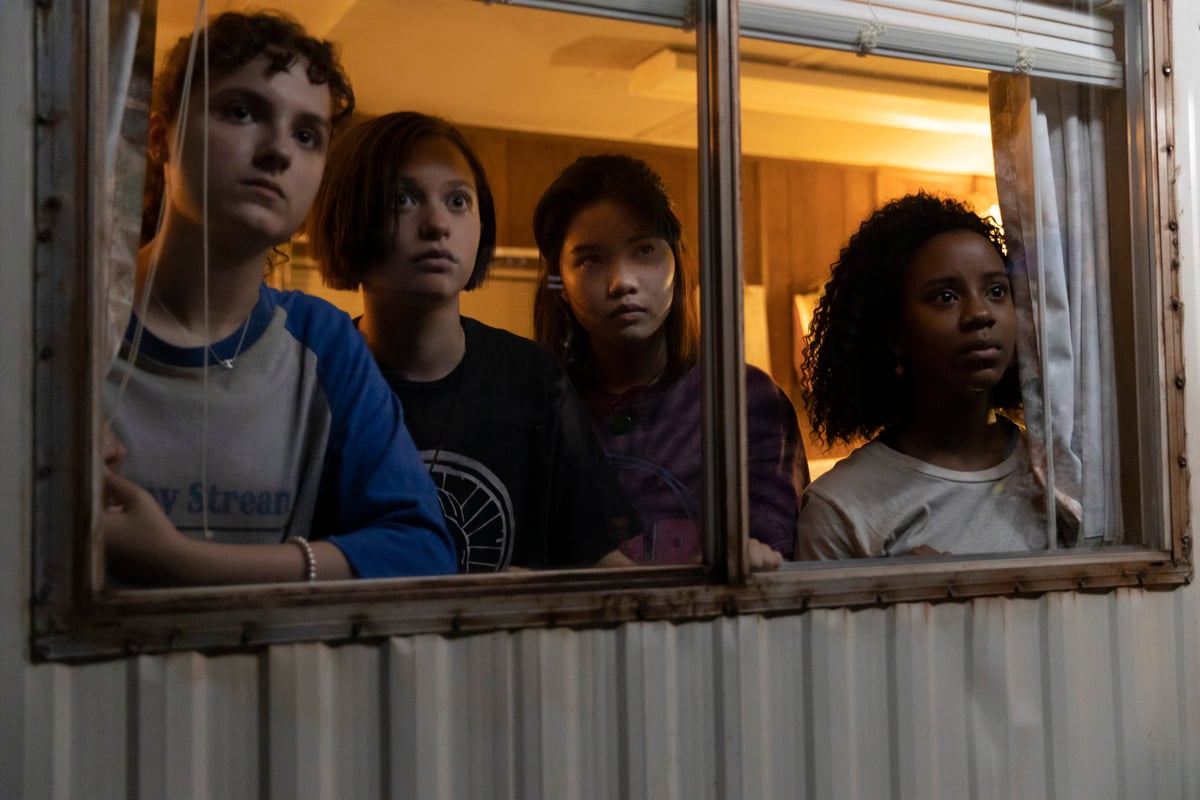 To wrap up our speedy interview with the girls, we asked them to describe Paper Girls in one word each.

With a smile on her face, Finn chooses: "Heartfelt."

Intrigued? Well, Paper Girls is now streaming on Prime Video. You can sign up for a 30-day free trial, here.