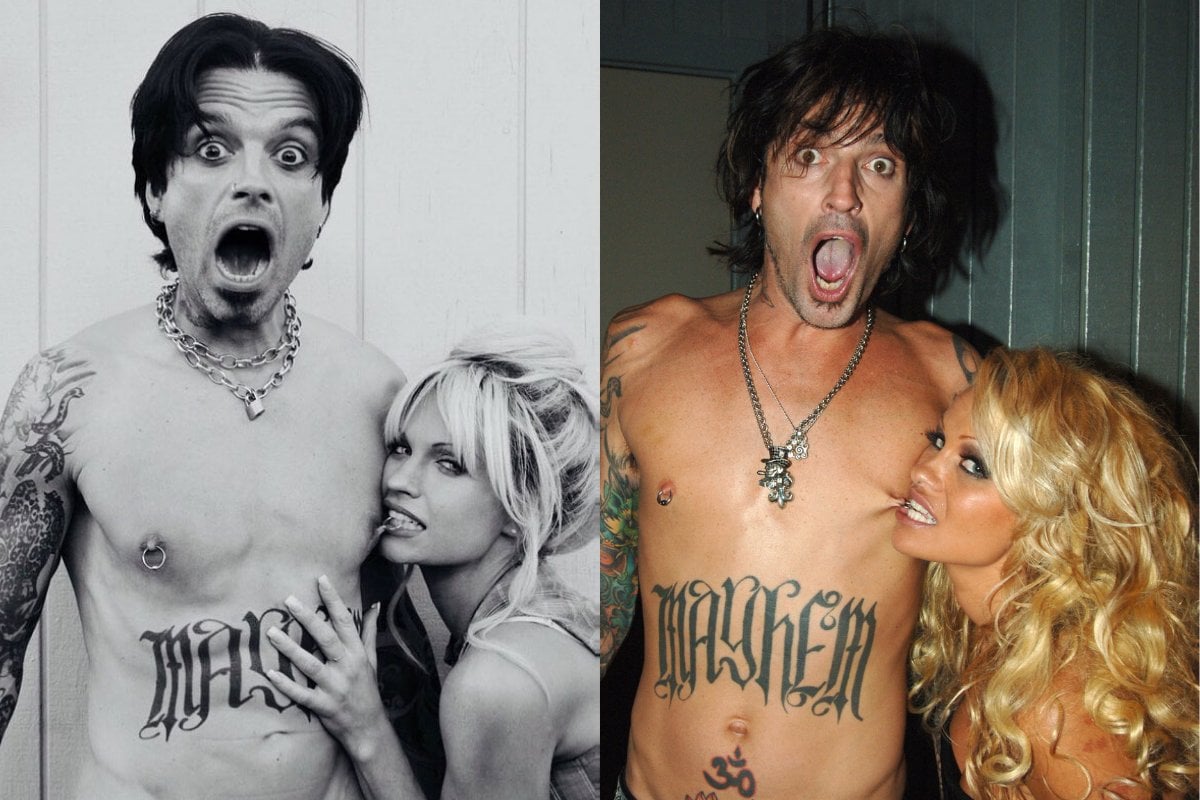 After a long wait, the real-life story behind Hollywood couple Pamela Anderson and Tommy Lee's whirlwind marriage is finally streaming on Disney Plus.

Starring Lily James, Sebastian Stan, Taylor Schilling and Seth Rogen, Pam & Tommy is directed by Craig Gillespie, best known for his work on I, Tonya and most recently Cruella.

Set in the 'Wild West' early days of the internet aka the 1990s and beyond, the eight-part comedic limited series follows the true story behind the release of the first-ever viral video - Pamela Anderson and Tommy Lee's sex tape.

Watch the teaser trailer for Pam & Tommy below. Post continues after video.

But before you binge watch the series, let's take a look at the cast of Pam & Tommy and their real-life counterparts. 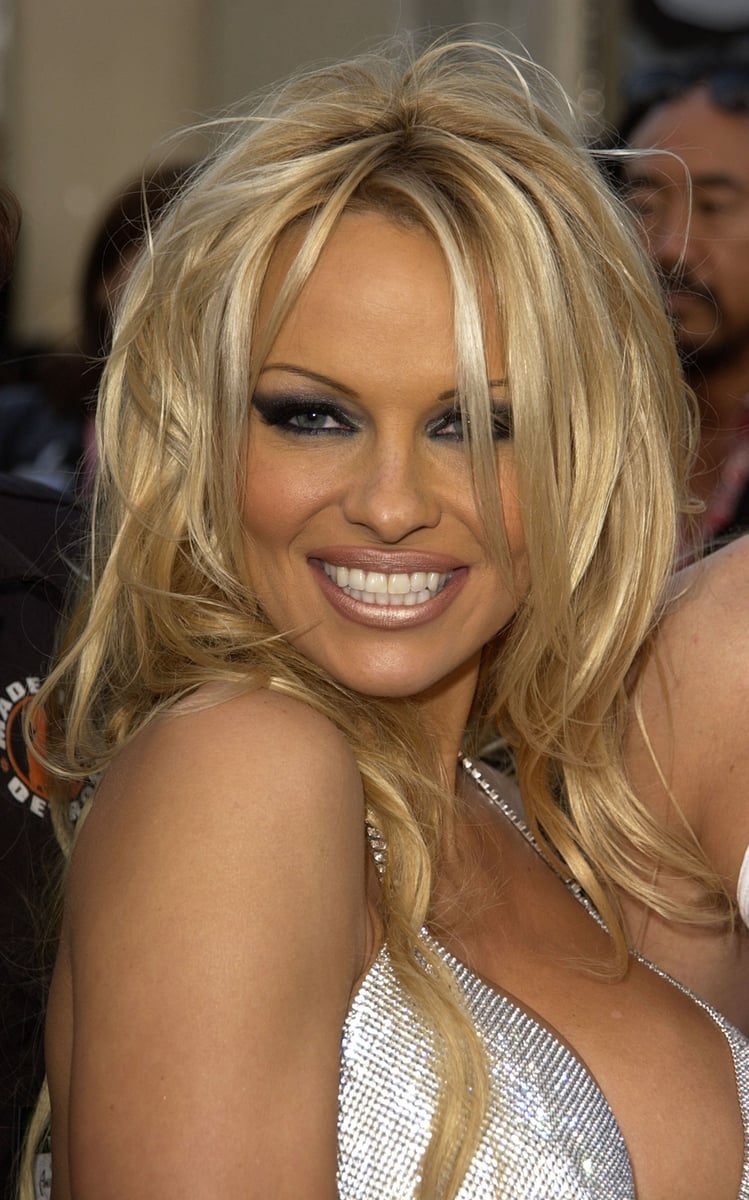 Pamela Anderson is portrayed by Lily James in the Disney Plus series. James is best known for her roles in Cinderella, Mamma Mia!, Downtown Abbey, and more.

The pair famously got married after just four days of being together and divorced three years later.

During their marriage, the couple welcomed two children together: Brandon (born in 1996) and Dylan (born in 1997), before their relationship ended in 1998, after Lee allegedly physically assaulted Anderson in their home, while she was holding their son. Lee spent six months in jail after pleading no contest.

On transforming into Anderson for the series and first seeing herself, Lily James told Entertainment Weekly, "I loved it. It was so wild."

While Anderson herself hasn't directly commented on the series yet, a source close to Anderson told The Sun, "Pamela has no intention of watching this God-awful show, absolutely not. Never."

"She’s never heard of the actors playing her or Tommy and doesn’t care to know them. She and her family think the show is a cheap knockoff," the source added. 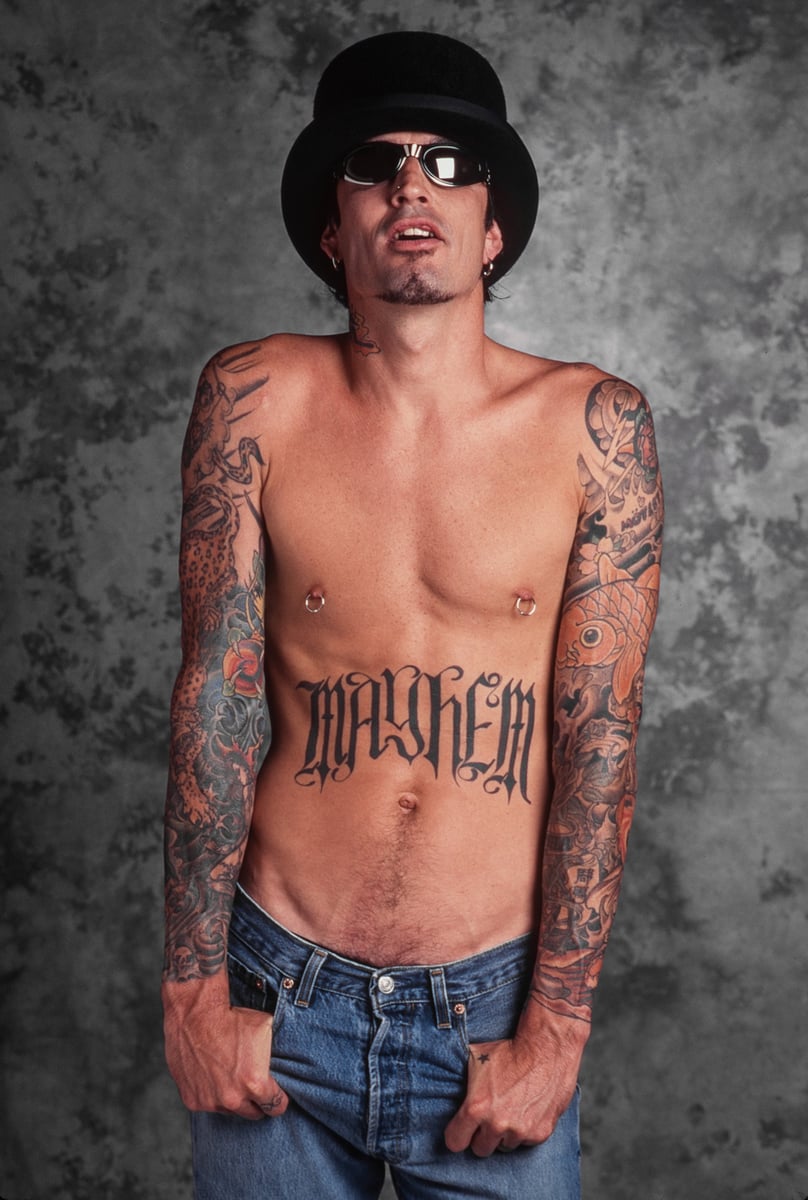 Romanian and American actor Sebastian Stan plays Tommy Lee in the series. The 39-year-old is best known for playing James "Bucky" Barnes aka the Winter Soldier in the Marvel Cinematic Universe.

Speaking to Entertainment Tonight about transforming into the Mötley Crüe drummer, Stan shared that it was a "crazy" process.

"We had the very best hair and makeup team we could've asked for and they just killed it," he said.

While his ex-wife is reportedly not too pleased about the series, Tommy Lee told Entertainment Tonight that he’s "stoked" for it to come out.

"I know Sebastian, he’s playing me. From what he’s told me, really beautiful story," Lee said.

"I think a lot of people would think it’s one thing, but it’s really about privacy and how things got crazy then. There are different laws now," he added.

"The story’s actually cool. What actually happened wasn’t, but [Stan] tells me it’s pretty wild. I feel like it was forever ago. But it’s a cool story, and people need to know. It’s cool. I’m stoked."

Actor and comedian Seth Rogen stars as Rand Gauthier. Rogen is best known for his roles in Knocked Up, Bad Neighbours, and more.

Rand Gauthier, a disgruntled electrician who was owed money by Lee, discovered Anderson and Lee's sex tape in a safe that he stole from Lee's home.

Rolling Stone reports the tape took two years to go viral and when it did, it made an estimated US$77 million in less than 12 months through legitimate sales alone. However, neither Anderson nor Lee received a cent.

Both Lee and Anderson tried to block the release of the sex tape, with Anderson suing the video distribution company, but she eventually dropped her suit after the tape was released online.

According to People, during an appearance on Watch What Happens Live with Andy Cohen, Anderson shared, "I’ve never seen it. I made not one dollar. It was stolen property. We made a deal to stop all the shenanigans."

Lee has since shared the leaking of their sex tape played a massive role in the breakdown of their marriage.

"Not being able to do anything about [the tape] was adding so much frustration and stress to our relationship," he said in 2014, according to Us Magazine.

According to Decider, Gauthier, who is now in his 60s, is still an electrician. He's currently living in Santa Rosa, California. He barely made a cent off the sex tape, and faced no legal repercussions for his actions.

Taylor Schilling plays the wife of Rand Gauthier, Erica Gauthier. Schilling is best know for her role as Piper Chapman in Netflix’s Orange is the New Black.

According to Us Magazine, Erica Gauthier retired from the adult film industry in the early 2000s. She later died at age 53 in December 2009 following a car accident.

Pam and Tommy is available to stream on Disney Plus now.