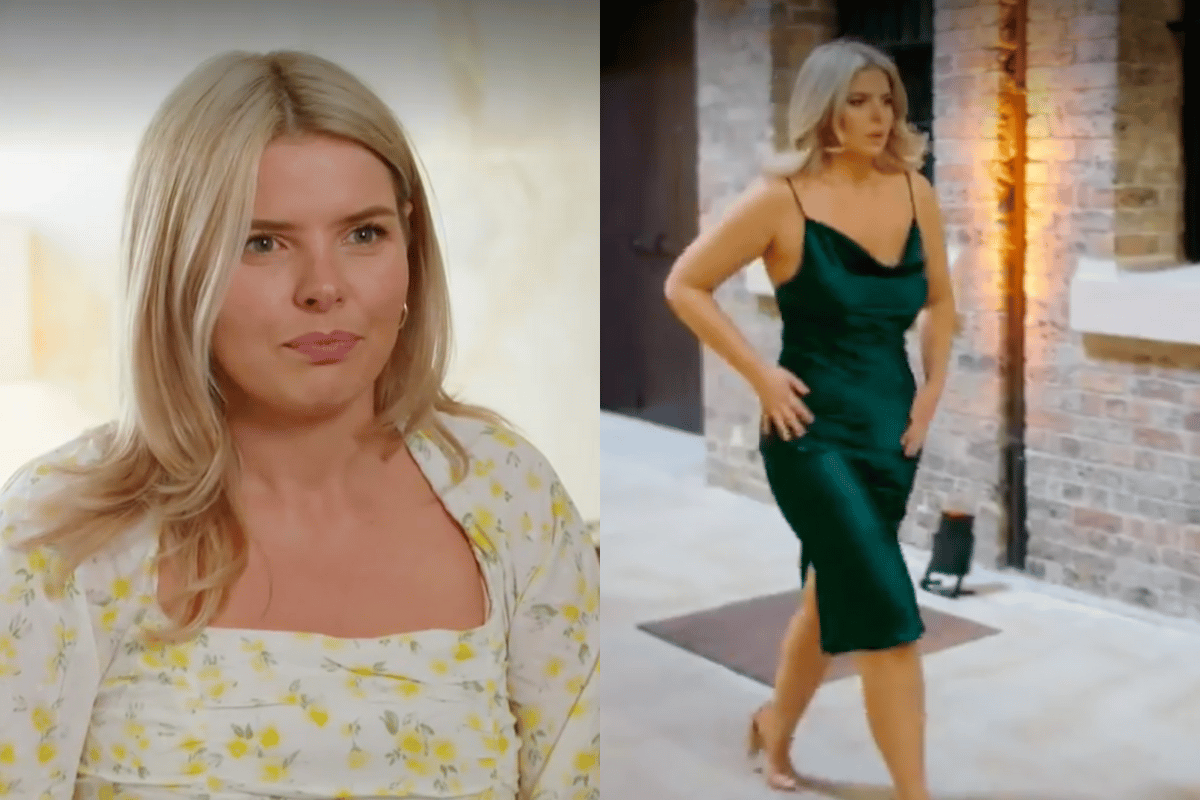 We first saw Olivia on the premiere episode of Married At First Sight Australia.

We recognised her as the girl in the shimmering green dress and watched as she delicately looked around at all the new faces - her own riddled with anxiety.

Of course, there was a reason for it. She told the cameras that she had once been a fat girl who had gotten skinny, but couldn't help but feel she was still trapped in an overweight body.

And there it was. Olivia's place on the show was now crystal clear.

You see, there is an obsession society has with giving women a fat to skinny redemption - a "glow up", if you will.

"I have a lot of insecurities and they definitely stem from being overweight," she explained before going on to say that she had settled for less her whole life because she had truly never felt valuable as a plus-size woman.

"I tried to be as confident as I possibly could on the surface, but deep down I knew everyone was staring at the fat girl trying to fit into a skirt."

Maybe in the moment, where she was trying to be as vulnerable as possible, Olivia didn't realise she was regurgitating a fatphobic rhetoric that society has been shoved down women's throats for decades.

You're not good enough until you're smaller, fat women are not desirable and there is nothing wrong with the system, it is your size.

I initially remember twisting my face in disappointment. Once again, we were being exposed to the same ideals that I thought we'd stamped out after The Biggest Loser.

While you're here, listen to the Cancelled podcast episode on The Biggest Loser. Hosted by Clare and Jessie Stephens. Post continues after audio.

Of course, as there always is, there would have been a resounding response to her 'transformation'. She is beautiful (now). She is okay (now). She has nothing to be insecure about (now).

The issue though, highlighted in perfect clarity, went unnoticed.

Married At First Sight's depiction of Olivia's problem with being fat is not about health, but appearance.

Why hadn't the plot focus been on Olivia caring for her dying father for seven years, and him passing away a year before she would appear on everyone's screens at home?

Why isn't the focus on the fact that Olivia was - and still is - dealing with a loss far more significant than one of weight?

Time and time again, we've had advertisements, TV shows, movies, our favourite celebrities (and even the ones we loathe), tell us that skinny is beautiful, health doesn't outrank appearance and fat is the last thing on earth a woman should ever want to be.

It's also not about health - hating fat people never has been.

We saw those exact sentiments in the film Love Actually where the love interest Natalie (played by Martine McCutcheon) was insulted on her appearance (by friends, family and colleagues) and often referred to by not her name, but instead her size.

And then there was watching Samantha from Sex And The City be fat shamed for wearing a crop top which highlighted a (slightly) protruding belly.

"I guess I didn't know how big I was until I saw the looks on your faces," she would later tell her friends whose own shock at a woman no longer slim could not be hidden.

While neither of these plots have aged well, we can't assume that our modern day disgust has eroded all sense of fatphobia. In fact, in the case of MAFS, it seems we've simply refined it into something that appears slightly more digestible.

Now we see it in women who were "unhappy" and made a bid to "change themselves for the better" with no specific mention to health, and only size.

Now we see producers concoct scripts that show women how much "better" their situations are since losing weight.

And that is why, watching Olivia speak on about her own relationship with being fat, and how deeply unhappy she was doesn't make me eye roll anymore, now it just makes me sad.

The conversations airing on our screens are not helpful and focussing exclusively on appearance, with zero mention of health, is much more harmful than it is 'inspiring'.

So again, let me ask, why is Olivia's body such a major plot point on MAFS, and how many more time we will have to see this narrative play out on our screens?

Reply
Upvote
It is sad but it is the reality of real life unfortunately.  I was married for nearly 30 years only to be told then when I struggled with my weight, he fell out of love with me.  Despite the fact that I was an amazing mother, devoted wife, a good person and successful in my career, my weight was the focus of his affection towards me.  We have since split up and my first experience into the world of dating was again met with an emphasis on body image (which I quickly exited stage left).  So I completely understand why Olivia feels the way she does. I too had the surgery to feel better about myself but the psychological damage is still there and I do feel like I'm still the 'fat girl' even though I now fit into a size 10.  All the positive body image rhetoric in the world does not change the fact that we have a society obsessed with skinny!
G
gypsy 3 months ago

Reply
Upvote
2 upvotes
@jackiejj The hangups probably stem from the old adage that inside every fat person is a skinny person trying to get out. Deep down they wish they were something else, as you have proven from what you have written. . Good on you, I hope you are in a happy place now.
News
General
Opinion
True Crime
Politics
Sport
Explainer
Entertainment
Celebrity
Reality TV
Movies
TV
Books
Rogue
Royal
Lifestyle
Beauty
Fashion
Weddings
Home
Wellness
Health
Fitness
Travel
Food
Parents
Before The Bump
Pregnancy
Baby
Kids
Teens
School
Parent Opinion
Work & Money
Money
Finance
Career
Lady Startup
Relationships
Sex
Dating
Separation
Friendship
Family
Real Life
Couples