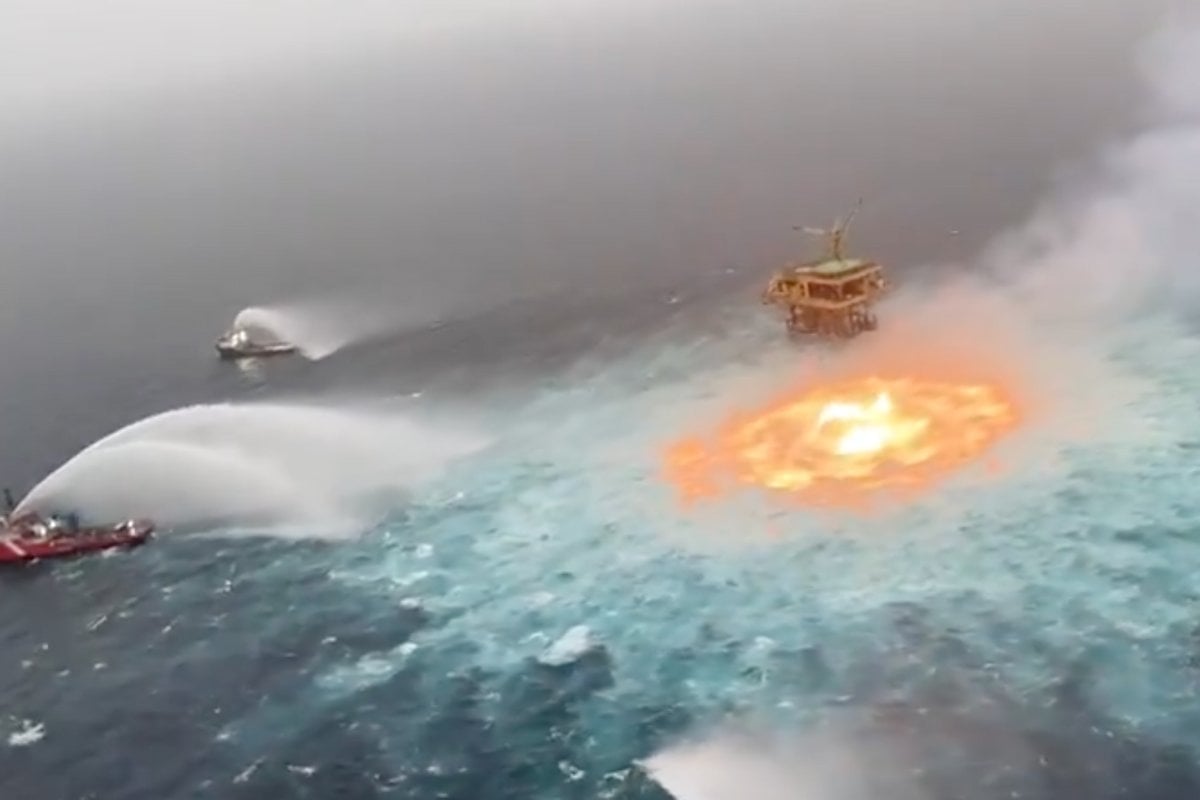 The ocean on fire? It seems like a scientific oxymoron. But over the weekend, it happened.

You've likely seen the video of volcanic-like flames sparking out of the ocean. The striking videos show ships - dwarfed by the size of the blaze - dousing water onto the orange swell that resembles molten lava.

Some people online, where the videos have been widely circulated, have called it a "portal to Hell" or "eye of fire".

So what exactly was this, and how did it happen?

In the Gulf of Mexico, the inferno formed on the surface of the ocean at about 5:15 a.m on Friday morning local time.

The blaze was caused by a leak in an underwater gas pipeline, controlled by Pemex - Mexico’s state-owned oil monopoly. The burst in the valve triggered an explosion and the resulting fire on the surface. It occurred about 400 meters from the Ku-Charly oil production platform.

The fire took five hours to be extinguished, using nitrogen. No injuries or deaths have been reported, but the impact on the local marine life is yet unknown.

Angel Carrizales, the head of Mexico’s oil safety regulator ASEA, said on Twitter that the incident “did not generate any [oil] spill," but did not explain what was burning.

Online, many people pointed out the inherent danger in permitting oil companies to drill into fossil fuel reserves from the ocean floor.

"The ocean is on fire” is one of those things that you can type and it’s true and yet it doesn’t feel believable https://t.co/EouJfQIbjq

Pemex has a problematic history of dangerous and deadly industrial incidents occurring under their supervision - or lack of. Most recently, in 2015, four workers were killed and a further 16 were injured due to an explosion on the company’s Abkatun A-Permanente platform in the Gulf of Mexico.

Greenpeace Mexico has said this incident "is a clear example that the energy production model based on fossil fuels is inoperative and poses serious risks to the environment".

The environmental group continued: "The problem is that we continue to use fossil fuels, instead of resorting to renewable energy."

Mexico is the world’s 10th largest producer of oil, and in 2017 accounted for about one third of the government's total revenue.

Here's how people are reacting online.

We know we're doing our best for the planet when we have to SPRAY WATER ON THE OCEAN BECAUSE WE SET IT ON FIRE!!!! https://t.co/s2BIpakwhq

Never in your life forget the time humans caught the ocean on fire and then tried to put it out by spraying water on it. https://t.co/W7D5Qezfp3

Pretty sure that is Godzilla https://t.co/8HhABfTM8R

What exactly are the boats spraying water hoping to accomplish considering the fire in engulfed by, um, water