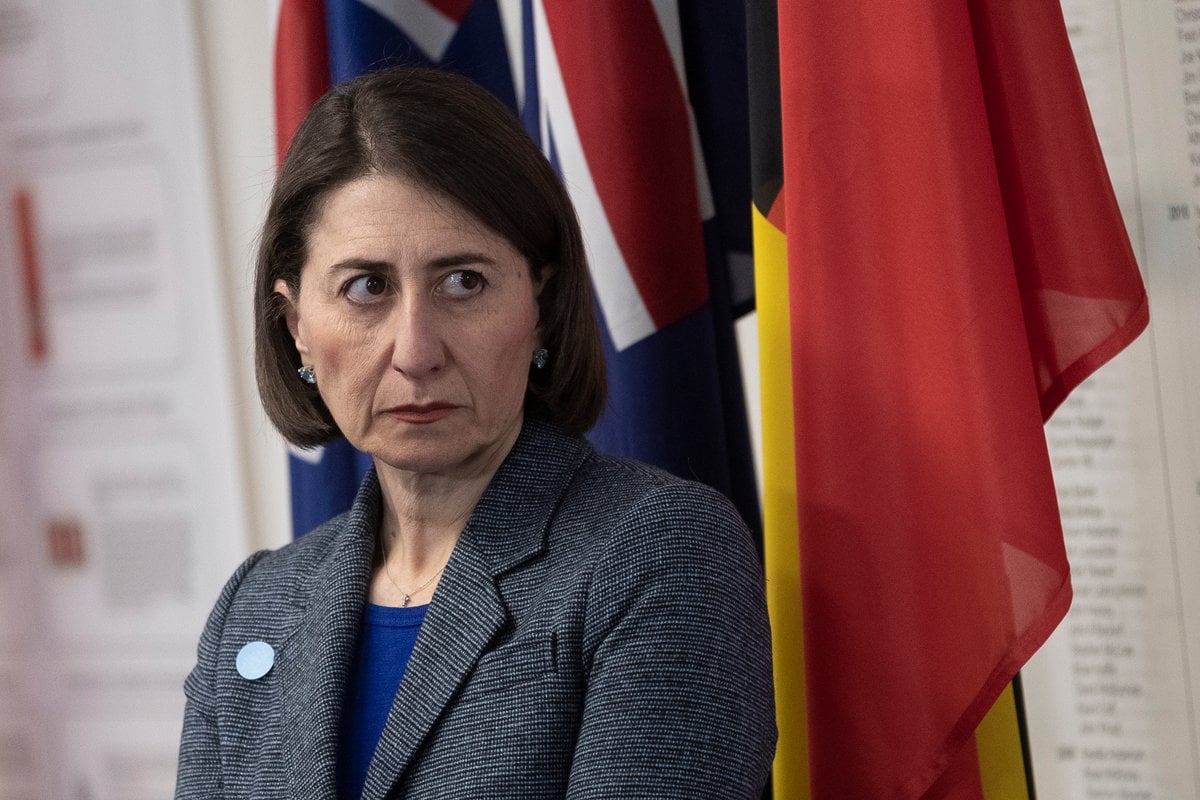 But in the 24 hours until 8pm on Tuesday night, the state's luck ran out.

Three new COVID-19 cases were confirmed in Sydney's west and south-west, and authorities have no idea where they've come from.

Today, another new case has been reported.

A woman in her 50s from Camden, a man in his 50s from Wollondilly, a woman in her 50s from Paramatta and a Macquarie University student have all tested positive, with public health alerts currently out for a Carlingford Pilates class, a Mazda repair centre, a restaurant at Milson's Point, a Kmart, Narellan town hall, Guzman & Gomez Penrith, and Westfield Parramatta.

Gladys Berejiklian on the questions around the Queensland border. Post continues after video.

With testing numbers currently down in NSW, the government is urging anyone with symptoms to get tested as they try to track down the latest outbreaks.

Four cases might not sound like a big deal, but it could impact when borders will reopen. NSW is facing the very strict target of "28 days of unlinked community transmission" before Queensland will agree to reopen its border to the southern state.

The hard border between the two states has long been an issue of contention, with NSW Premier Gladys Berejiklian telling WSFM this week: "If you apply that criteria: what's the next step? Does that mean that they'll open the borders and we'll get a case and they'll close again? You can't live like that."

Queensland Premier Annastacia Palaszczuk had been preparing for the border to fully re-open on November 1, but now her government says that plan will be delayed unless NSW Health can find the cases' source within 48 hours.

PUBLIC HEALTH ALERT: As outlined today, three new cases of #COVID19 have been confirmed in Sydney.

NSW Health is alerting the public to the following locations visited by confirmed cases: https://t.co/ZMNCb1Z61S pic.twitter.com/I7mRWYGP1v

That gives NSW until Thursday night to link those cases or the border clock could reset.

"The contact tracers in NSW will have 48 hours to see if they can scientifically link these cases to existing clusters. I really hope they can," Queensland Deputy Premier Steven Miles said late on Wednesday.

"If they can then that won't have any effect on our timeline, so as far as we know for now, we are still on track for a review towards the end of the month and a potential reopening on the first of the month.

"If these cases aren't linked then that will need to be revised ... we would consider pushing that date back.

"If they can't be linked within two days then the link isn't sufficiently clear."

We’re doing everything we can to keep Queenslanders safe during this pandemic.

That's why we're asking everyone to keep following the health advice and stay safe. pic.twitter.com/hgcxk5z9CL

"We always see some close contacts, particularly household contacts, that might be infected, and that's because people are infectious before symptom onset," she said yesterday.

Premier Berejiklian is also not surprised to see locally acquired cases of the virus, because, she says, that's the nature of this pandemic - they will continue to pop up.

While the rest of the country has COVID-19 effectively eliminated for now, Victoria and New South Wales remain the only states in Australia recording multiple new cases regularly.

Queensland recorded no new cases of COVID-19 on Wednesday, with just seven active cases in the state, and it is remaining steadfast in its desire not to 'risk' those numbers increasing.

But Premier Berejiklian is unimpressed with the deadline being enforced on her state, and admits she hasn't had any contact with her northern counterpart of late as the pair continue to butt heads.

During an interview on Sunrise this morning, Berejiklian accused Palaszczuk of "coming up with another rule" to keep border closures in place.

"To me, it sounds like advice on the run... they’ve suddenly given our experts two days. Who said that you can only give your experts two days to find a genomic link? Sometimes our experts can find a link in two hours and sometimes it can take multiple days because they have to do all that checking.

"The experts have enough pressure on them already, I just want them to do their job, I don’t care how long it takes," she told the program.

Berejiklian added that she feels like "no matter what NSW does, Queensland is not going to change their mind," but reiterated that she hopes the Queensland government appreciates the impact their decisions are having on so many people, tourist operators and families.

"[But] I don't think she (Palaszczuk) cares what I say, or what the PM says... she has in her head what she wants to do," said Berejiklian.