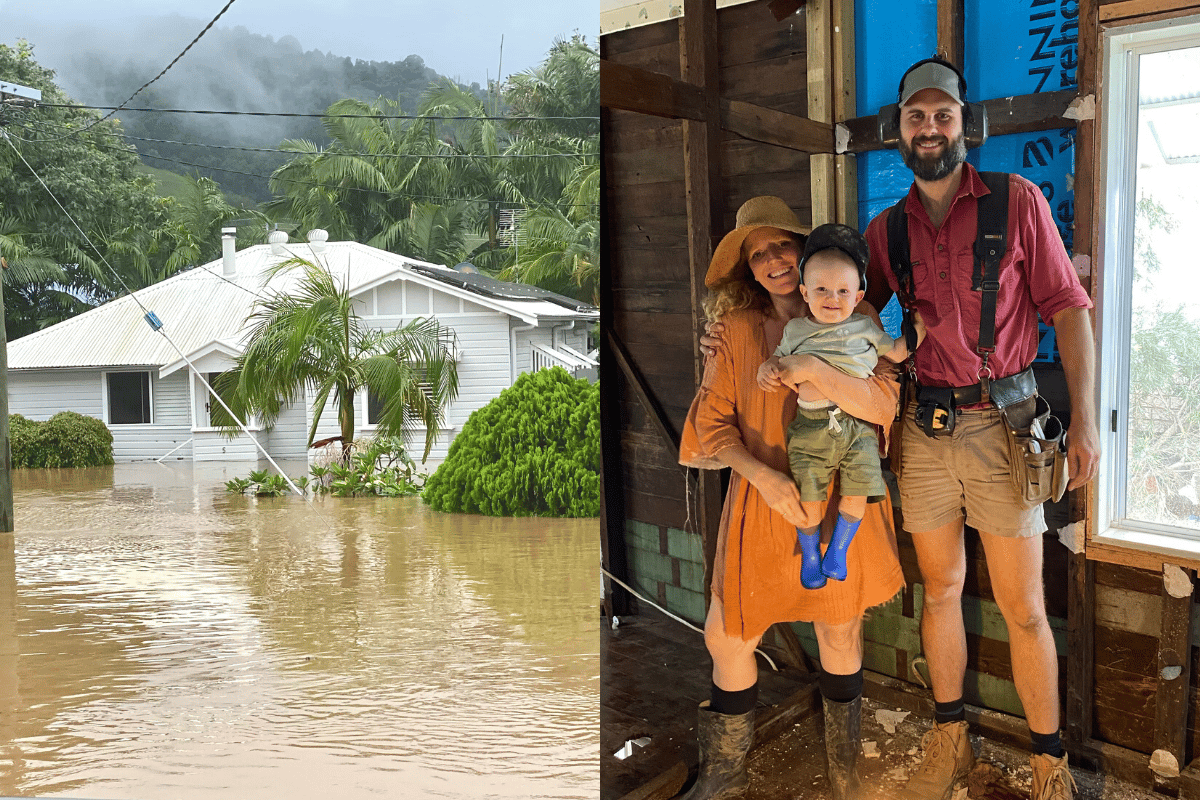 Water is flooding homes for the second time in a month in northern NSW.

But at Camilla's home, in Tumbulgum, there was nothing much left to destroy.

The 37-year-old, who is five months pregnant with her second child, lost everything in the floods mere weeks ago.

"It’s absolutely soul-destroying because we've been through lots of floods but we've never had floods so close together," she told Mamamia.

Camilla was one of the thousands of residents told to evacuate their homes again this week - just as her community was starting to get back on their feet.

"Our home is empty but it means another cleanup… You just think, not again. It's just so stressful," she shared.

"How much more can people take?"

Her partner, Tom, was supposed to return to work as a builder this week and Camilla was meant to have a 20-week pregnancy scan on Tuesday.

Instead, she was trapped at her Aunty's house in North Tumbulgum away from Tom and her son, who were staying in temporary accommodation, 40km away in Pumpenbil.

"I just came here to get a good night's sleep... and now I can't get out and get a [pregnancy] scan. I get really anxious about being so far away from the hospital and I don't want to go into labour out of nowhere."

"I feel like this is the time I should be nesting and getting organised."

Instead, she's in survival mode and suffering from "severe exhaustion" and "flood fatigue".

The family first fled their home on Monday February 28 when they woke up to find water rising around the house.

"We went to bed on Sunday night and woke the next day and we were completely surrounded.

Five months pregnant and with a 14-month-old son, Camilla was stressed about the prospect of having to get in a boat to flee to safety.

"In those situations, you’re in such a stressful mindset… and I really didn't want to get in a boat with my 14-month-old. I just thought if we fall into the river that's it.

"There were cows swimming around and dogs howling. It smelled like petrol everywhere. People were yelling from their houses and alarms were going off."

The couple, along with Camilla’s sister - who was staying over at the time - clambered on top of their kitchen bench.

"We were just sitting there miserable while the water was coming in," she recalled. "Then it started to come in faster."

They knew they had to go, now.

They rounded up their dogs and a bag of baby supplies, and travelled by boat to their neighbour’s house. 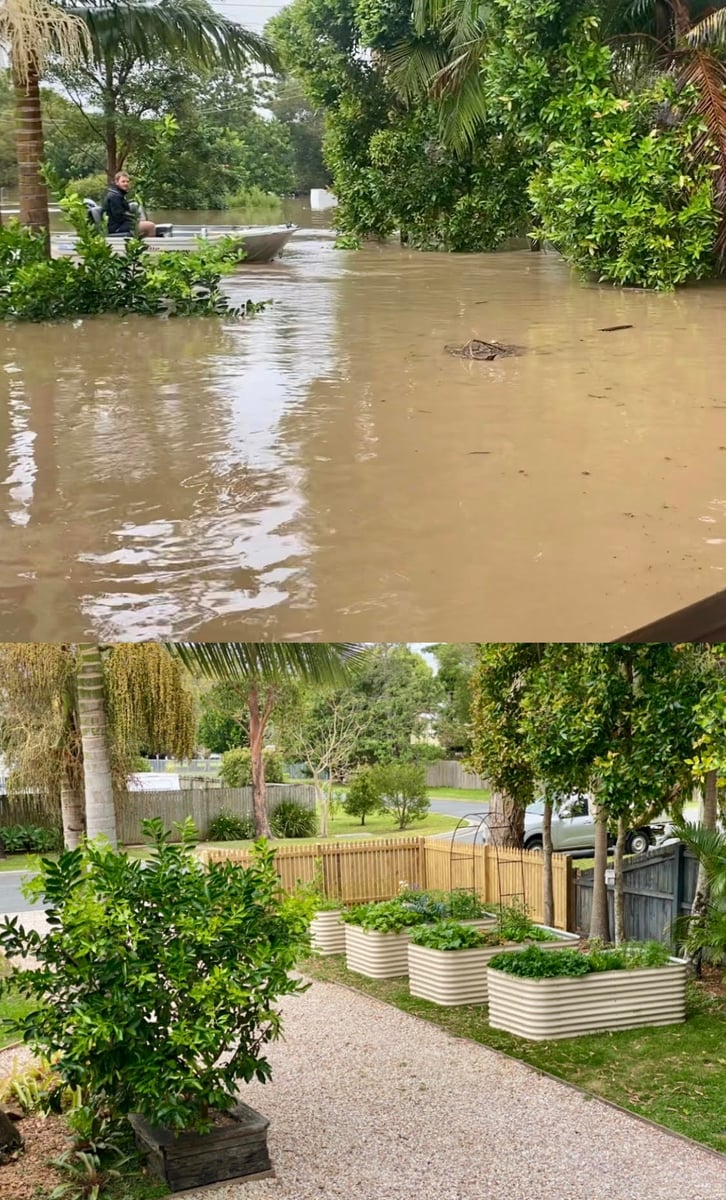 Camilla's neighbour driving over the fence and vegetable patch in their garden. Image: Supplied.

Finally, they thought they were safe.

"Then the water started rising higher."

Once again, the stress set in and the group decided to travel by boat to a friends' house, picking up strangers along the way.

"We got to my friend's house and we were working out beds and thinking, ok we've got a bit of food, we'll be ok until tomorrow."

"Then a neighbour started yelling across the balcony 'everyone has to get out now, the water is coming up even further. We've been given a warning, you have to leave now'."

"All of us went white with a complete sense of dread… I was thinking oh my gosh, my unborn baby, it was so stressful. I've never felt that feeling of just pure fear."

The plan was to move to higher ground and make their way to a local bridge.

Thankfully, they waved down the one SES boat that drove past, who came back for the family and took them to the bridge. There, they found another two men in a boat who took them to the nearby town, Terranora. 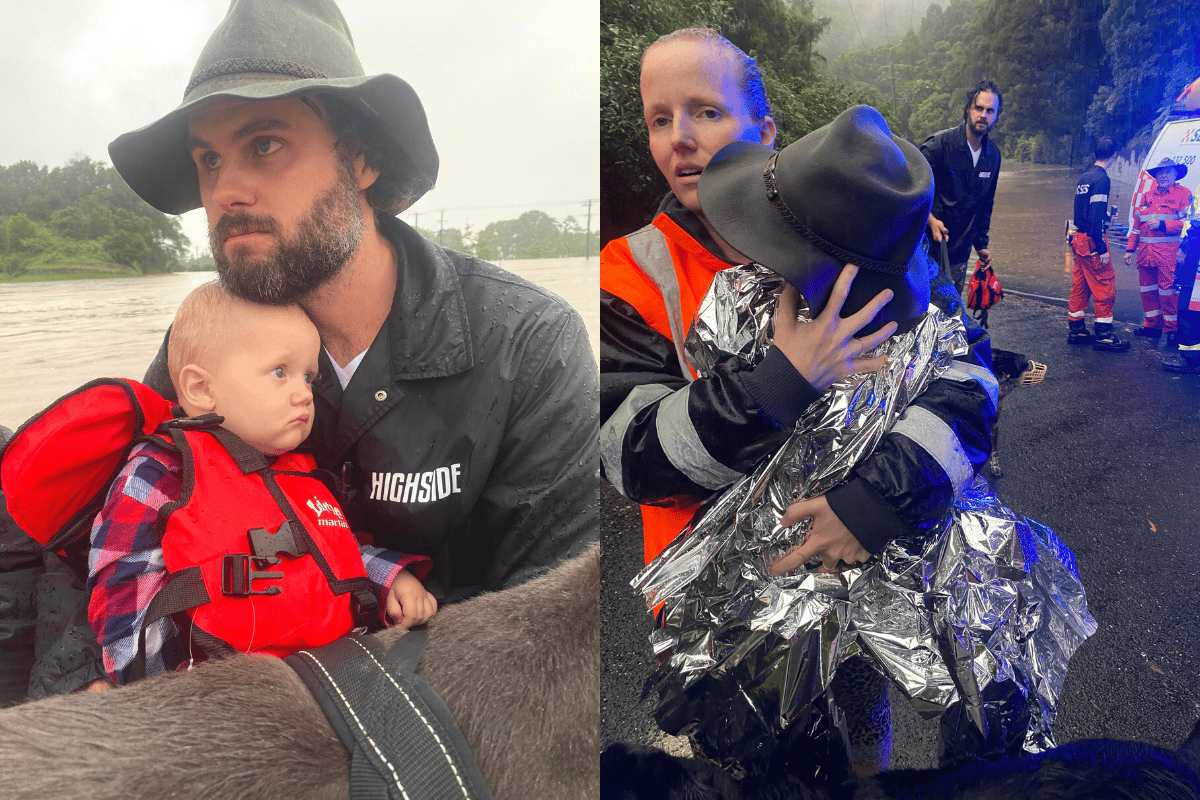 "When we got out of the boat we were just sopping wet with the dogs and they put a blanket on us… The SES employee told us 'you're better off going home with a stranger than going to the evacuation centres'," said Camilla.

That's when an "absolute angel" stepped in to help.

A stranger named Bonnie, who had been busy rescuing people herself and was waiting to hear news about her own family, saw the group and invited them to stay with her.

"Over the next few days all the women in the community came together with donated prams, car seats and all our baby, Ted, needs, even the clothes off their own back."

Bonnie cared for the family for three nights before they later moved in with Camilla's Aunty in North Tumbulgum.

72 hours after being evacuated they went home to survey the damage. It was "catastrophic".

"We got back to the house and the water had come in so fast and so powerful… it had thrown all our furniture around. Our fridge has been thrown across the kitchen."

"Our house sat for two days in this disgusting, muddy, smelly, toxic waste… and everything started to get mould on it so we thought let’s gut it."

They dragged everything they owned into a rubbish pile at the front of their house and had friends come over to help with some demolition.

Her family are now waiting for their home to be raised up on steel beams and renovated before they can move back in. 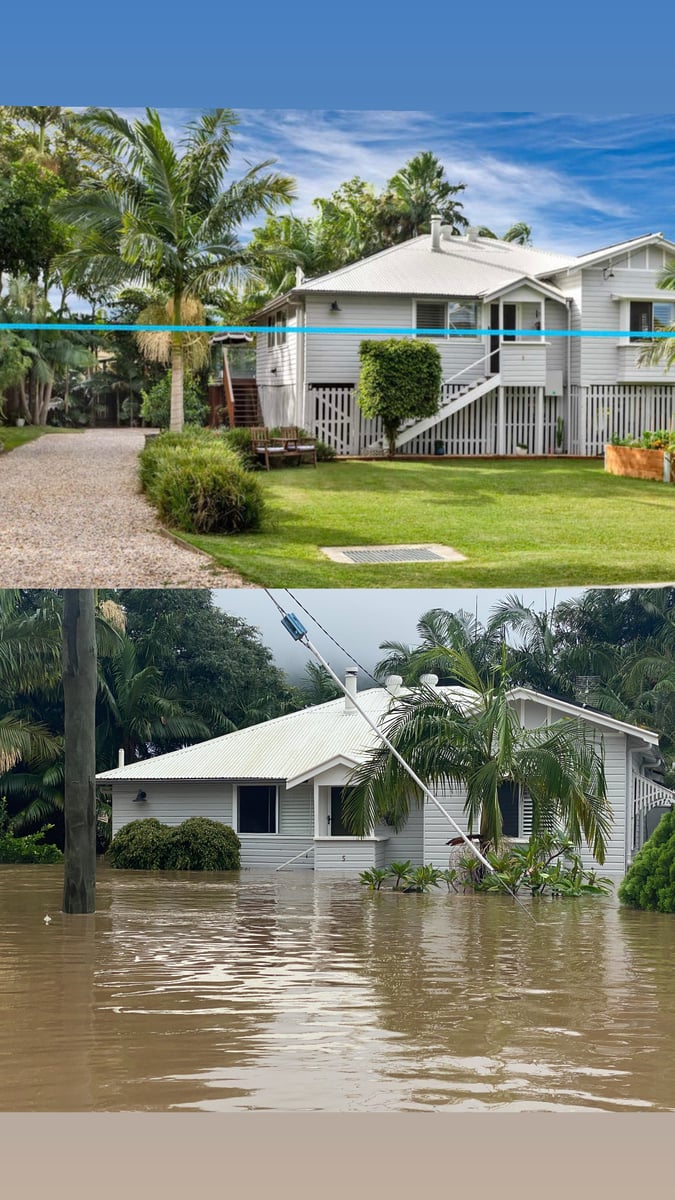 The blue line shows how high the water rose on their house. Image: Supplied.

Looking through the wreckage, it became clear her family lost essentially everything, including the small things that make a house a home, like the trinkets Camilla collected from her travels and the paw print of her dog that was put down.

It's a loss felt throughout the entire community.

"There's just this deep sense of grief and trauma everywhere [in the community]. It's just like an overall sense of desperation and just driving around there's rubbish everywhere, people have lost their animals and it's just hard to not get down."

On top of the disaster, there are also cases of COVID-19 in the community, with over 500 cases recorded in their local government area of Tweed over the past four weeks.

"We know people isolating have to evacuate with COVID to the centres [because] they don't have anywhere to go. It is just another worry."

Throughout this devastating time, Camilla says the community have rallied together. She has received an incredible amount of support from volunteers, including food and clothing donations. But admits she hasn't felt as much support from the government.

"If there was no civilian volunteers it would just be an absolute nightmare."

With the water receding for a second time, Camilla is hoping to find temporary housing closer to her home and the hospital where she is planning to give birth.

In the meantime, she just reunited with Tom and her son and asks the community not to forget about those who need help this time round.

"Just don't forget about everyone," she told Mamamia.

"I worry about people's mental health and how they will cope with a second flood. [We're] hoping more volunteers will come back down for the second clean up...people were just getting back on their feet."

If you'd like to support Camilla, a GoFundMe has been set up for the family. You can find it here.