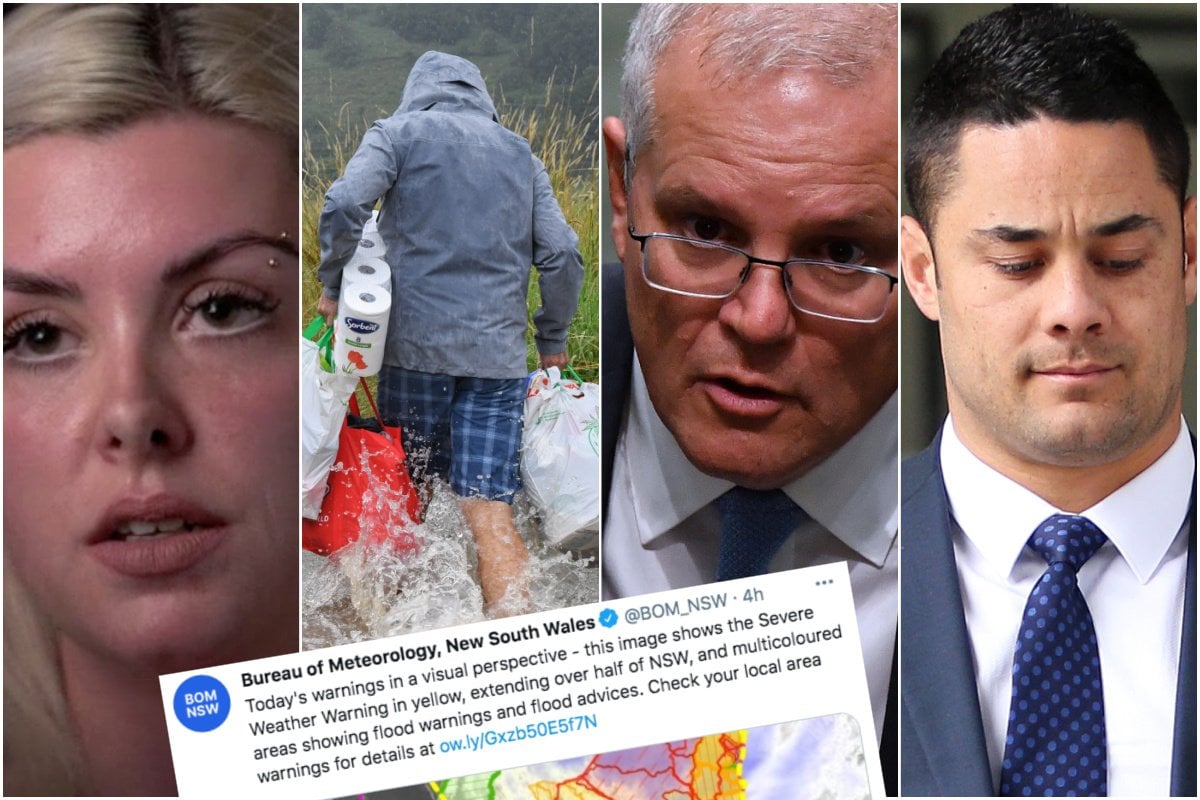 Evacuation warnings have been issued for people northwest of Sydney amid heavy rainfall and flooding that left an emergency services crew dealing with snakes during a rescue on the NSW Mid-North Coast.

Major flooding is occurring along the Colo River, with residents on Monday night told to prepare to evacuate as waters continued to rise.

Major flooding similar to the 1988 and 1990 flood events is occurring along the Hawkesbury River while the Bureau of Meteorology is forecasting heavy rainfall to continue through Tuesday.

Today's warnings in a visual perspective - this image shows the Severe Weather Warning in yellow, extending over half of NSW, and multicoloured areas showing flood warnings and flood advices. Check your local area warnings for details at https://t.co/sAKGux9DJj pic.twitter.com/HYQVVPlEKM

The NSW State Emergency Service has told residents in several suburbs throughout Sydney's northwest to prepare to leave, with more than 18,000 having already been ordered to get out of areas in the city and in northern NSW.

The SES issued an evacuation order for low-lying properties in North Richmond and Agnes Banks due to rising floodwater.

The major weather emergency impacting 10 million people along Australia's east coast is estimated to be a $2 billion disaster. More than 18,000 people are currently under evacuation orders, while 194 schools across NSW will remain closed. Here’s what you need to know. #9Today pic.twitter.com/ackjC7ZF4K

The SES on Tuesday morning reported crews attending 9700 calls for help across NSW, including 870 flood rescues.

Weather forecasters say the record-breaking floods in many of the state are amongst the worst they've seen - and there's more torrential rain to come.

Torrential rain that could threaten lives is falling across southeast Queensland, with a swathe of the state's west also braced for flash flooding.

On the Gold Coast, where rivers have become heaving expanses of white water, police are rushing to evacuate residents from two adjacent streets after major landslips there.

Some theme parks, including Dreamworld, have closed as the weather worsens, with the Gold Coast, Brisbane, and the Sunshine Coast on high alert, along with Channel Country communities as far west as Birdsville.

Police are helping people leave their homes in Crest Hill Drive and the adjacent Lanes Road at Wongawallan. It's unclear how many households will need to leave.

Officers say the situation is still unfolding but the foundations of at least one home have been severely eroded, leaving it perched precariously on a hillside. Fences have also toppled over.

A flood watch is current for a wide band of southern Queensland stretching from the South Australian border to the southeast coast.

A News Corp and Ten News report has revealed a small group of staffers at Parliament House allegedly set up a Facebook messenger group in which they sometimes shared images of themselves performing sex acts on the desks of female MPs.

Finance Minister Simon Birmingham called for the immediate sacking of coalition staffers on Monday evening, telling an estimates hearing he was "disgusted and appalled" by the claims.

"It shows a complete disregard for all our parliamentary democracy stands for," he said.

Senior Coalition staffers have filmed themselves performing solo sex acts on the desks of female MPs and swapped images and videos of sexual encounters in Parliament House.https://t.co/0FaEKSHTQz

"I want to see this sort of behaviour stamped out," he said.

Prime Minister Scott Morrison has blasted the reports as "disgusting and sickening" and said last night, "It's not good enough, and is totally unacceptable. The people who come to work in this building are better than this."

Mr Morrison said the staff member at the centre of the allegations had been identified and had his employment terminated immediately.

A guard on duty the night of the alleged rape of Brittany Higgins in a Parliament House ministerial office has questioned the prime minister's claim it was a "security breach".

Ms Higgins, a former Liberal staffer, alleges she was raped by a colleague in minister Linda Reynolds' office in March 2019.

Experienced security guard Nikola Anderson found Ms Higgins naked on a couch in the office after the alleged rape, she told the ABC's Four Corners program on Monday.

Ms Higgins alleges she fell asleep on a couch and woke to find her colleague "mid-rape".

When Ms Anderson was told by a colleague the man had left Parliament House "in a hurry" they notified the night shift team leader that "there might've been something a bit strange going on".

Ms Anderson was asked to do a welfare check on Ms Higgins, and around 4.20am found Ms Higgins naked on a lounge.

Noting Ms Higgins was conscious and did not look to be in distress, the guard shut the door and went back to her duties.

Meanwhile, an investigation into what the prime minister's staff knew about the alleged has been paused over fears it could interfere with the police investigation.

Department of Prime Minister and Cabinet secretary Phil Gaetjens, who has been asked by Mr Morrison to check who knew about the allegation and when, told a Senate estimates hearing he had acted on Australian Federal Police advice to halt his probe.

AFP Commissioner Reece Kershaw said he had told Mr Gaetjens it was "strongly advisable" to hold off finalising interviews with staff until police could clarify any possible crossover.

The NSW Police Force has implored survivors of sexual assault to come forward with their stories after fallen NRL star Jarryd Hayne was convicted of raping a woman in her Newcastle home in 2018.

Hayne, 33, had denied assaulting the woman, saying the incident in her bedroom had been consensual.

But Hayne was found guilty of two alternative counts of sexual intercourse without consent.

He'll face a sentence hearing on May 6 in Newcastle.

No opposition to veteran suicide inquiry.

Scott Morrison is under sustained pressure to establish a royal commission into veteran suicides after being urged by all sides of politics, including members of his own back bench.

A non-binding motion calling for a royal commission has sailed through both houses of parliament.

Several coalition MPs spoke in favour of a royal commission, which is not government policy.

Liberal MP Gavin Pearce, who served in the Australian Army for two decades, said a royal commission was bound to happen.

It’s passed, unanimously. Every single Member of Parliament, from every party, in both chambers, has backed a Royal Commission into veteran suicide.

Now, it’s up to the Government to honour that call. #vetsweforget https://t.co/68D6M9ksS8

"While I support the royal commission, the only reservation I have is that I want something for our veterans tomorrow," he told parliament on Monday.

"A royal commission is going to take 18 months before we see any action.

"What happens to the digger who's contemplating that tomorrow, or on the weekend, or next month? As well as the royal commission, I want something now that will protect our veterans, protect our families."

With several coalition backbenchers prepared to cross the floor, the coalition would have lost the vote if it contested the motion.

The NSW Independent Commission Against Corruption found former Wagga Wagga MP Daryl Maguire gave false or misleading evidence to the ICAC during an investigation into alleged corruption at Canterbury Council.

ICAC handed down its report into Operation Dasha on Monday, recommending the Director of Public Prosecutions look at whether charges should be laid against the man who was Ms Berejiklian's secret lover for five years.

ICAC has made 23 corruption prevention recommendations.

Significantly, it recommended the DPP look into whether charges should be laid against Mr Maguire, the former Canterbury Council employees, as well as two property developers.

"The commission is of the opinion that consideration should be given to obtaining the advice of the DPP with respect to the prosecution of Mr Hawatt, Mr Azzi, Mr Stavis, Charbel Demian, Daryl Maguire and Marwan Chanine for various offences," the report concluded.

Hollywood star Zac Efron's brother was granted an exemption to enter Australia after the NSW government estimated he would pump $2 million into the film industry.

Dylan Efron angered Australians stranded overseas after he documented his two-week hotel quarantine, which ended earlier in the month, on social media.

The younger Efron travelled to Australia to help his brother with the production of the second season of Netflix series Down To Earth.

"It really set off a number of Australians who couldn't get home for dying relatives," Senator Keneally said.

"The exemption was granted on the basis of the applicant having critical skills and was supported by the NSW government," he said.

"Mr Efron's arrival was not included in NSW flight caps and did not impact on the number of Australians that could return."

- Authorities in the Philippines have tightened coronavirus restrictions as the country records a record daily increase of 8019 COVID-19 infections.

- Facebook has taken down 1.3 billion fake accounts between October and December and removed more than 12 million pieces of COVID misinformation.

- The BBC says a journalist from its Burmese-language service has been released by authorities in Myanmar as protesters in the country continued their broad civil disobedience movement against last month's military coup.