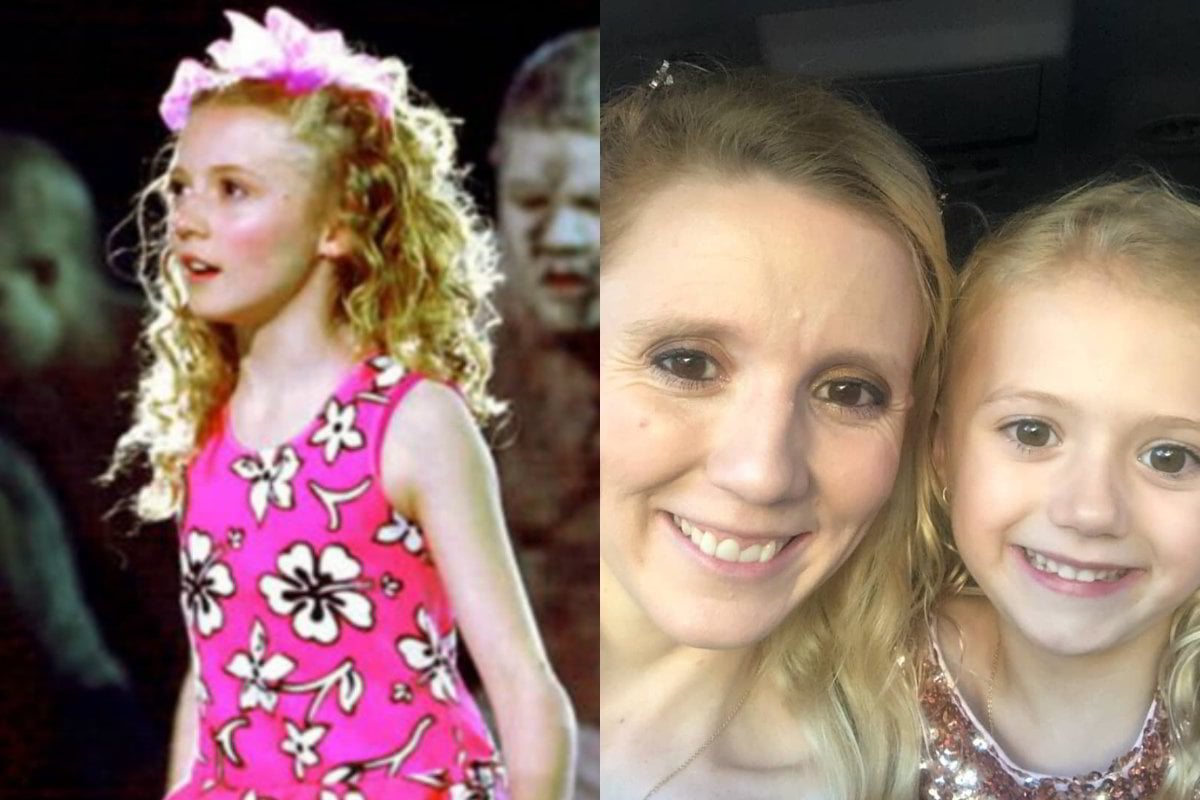 Twenty years on, Nikki Webster is still remembered as the little girl who flew at the Sydney Olympics and later released the hit song 'Strawberry Kisses'.

Before her performance at the Opening Ceremony in 2000, few people knew anything about the 13-year-old. Not long after, everyone would know who she was.

But when it started and Webster emerged as the 'Hero Girl', it was her parents Tina and Mark who got the biggest surprise. They'd been kept in the dark about just how big their daughter's role would be due to the secrecy of the ceremony but suddenly, she was everywhere.

In 2019, Nikki Webster appeared as Alien on The Masked Singer. Post continues below video.

In an interview with the Sydney Morning Herald in August, Webster recalled how on the train ride home, people handed them a paper with her face all over it.

Becoming the Hero Girl was an intensive process, that would have been worthy of a reality TV show in Webster's books, if such shows existed back then.

"Every young girl that you could imagine was there, every girl you had auditioned against for musicals, for TV commercials, it was a massive casting call," she said.

In July, Webster returned to our screens in Channel Seven's The Opening Ceremony of the Olympic Games Sydney 2000 Uncovered footage and interviews.

"It was so much fun to relive all the amazing moments and share behind-the-scenes insights from the Opening Ceremony, a day I will remember forever," Webster wrote on Instagram.

I joined @channel7 recently to film an interview that will air as part of their upcoming Sydney Olympic Games specials. It was so much fun to relive all the amazing moments and share behind-the-scenes insights from the Opening Ceremony, a day I will remember forever! #Sydney2000 #towardstokyo #sydneyolympics #sydneyopeningceremony

Looking back on her iconic performance, Webster told Mamamia last year that she “just forgot” that the eyes of the world were on her.

“I was enjoying it as much as people at home watching it.”

She still has the pink dress she wore that night.

“I’m never parting with that! And I’ve still got the little bag I walked out with, and some confetti that I threw.”

Last month, Webster shared a photo of her daughter wearing the dress she wore at the Olympics 20 years earlier.

"I can no longer fit into the dress but someone else can," she captioned the post.

20 years on from #Sydney2000 and I can no longer fit into the dress but someone else can!

In an interview shared on Instagram to mark the 20th anniversary of the Sydney Olympics, Webster explained the audition process she went through before becoming the 'Hero Girl'.

"It was six months worth of audition. It was such a funny thing because no one really knew what the role was. We knew that she had to fly and that was because of safety, so parents had to know and all of that but there was no really other explantation because everything was so discreet," she explained.

"It was the process of elimination, every time you came back there was less and less girls and I really didn't get the role until about... the beginning of September like 15 days before the role."

Sharing this interview ahead of the 20 year anniversary of the Sydney 2000 Olympics Opening Ceremony tomorrow. It’s hard to believe 20 years have passed when it still feels like yesterday! It was such a pleasure to be part of a magical event that connected so many people. It’s an experience that will always hold a very special place in my heart. #Sydney2000 #SydneyOlympics #MySydney2000 #SydneyOpeningCeremony #20years

The song went to number two in the Australian charts, when Webster had just turned 14. So how does she feel, as a mum-of-two, running a string of dance studios, that people still remind her of 'Strawberry Kisses' almost every day?

There was even a recent dance remix, 'Strawberry Kisses 2017', which proved its catchiness holds up almost two decades later.

It's out !!! Download on iTunes . Would really love everyone's support to help raise fund for the @starlightau all proceeds going to this great cause. Thank you all so much for your support with this. Let's take this journey together and have some fun with strawberrykisses2017

The Opening Ceremony performance catapulted her to instant fame, scored her a record deal, clothing label with Kmart and a role as Dorothy in The Wizard of Oz stage production.

“Anything I dreamed of as a kid and wrote in my diary was coming true at a very young age,” she remembered. “I was going, ‘Oh my gosh, this is crazy!’”.

At the age of 13, she was choosing her own musical direction. She remembered the first time she heard 'Strawberry Kisses', when she was going through possible songs to record.

“It was just an automatic ‘yes’ from me. I remember going, ‘I want this song.’”

But there was a downside. Not everyone was happy about her success.

“When you’re a child star and you’re at a performing arts school, you’re living everyone’s dream. So there is going to be jealousy and there are going to be people that think they could have done better or been better or whatever. I think that happens in every school but mine was on a global scale.”

Then there was the media. Webster struggled to deal with the stories that were written about her – both by journalists that hadn’t met her and those that had.

“I’d spend a great afternoon with a reporter and then they’d flip the story into something else, so that’s hurtful. I was like, ‘I thought you were my friend!’

“Now I realise they had a job to do as well. But that was hard to deal with as a young kid.”

Webster said there were also “a lot of opportunists” hanging around her, but she’s saving the stories for a book she wants to write one day.

“But it made me stronger, that’s for sure,” she added.

Throughout her teens, Webster had a string of singles that charted, including 'Something More Beautiful' and 'Dancing In The Street'. But none came close to the success of 'Strawberry Kisses'.

In 2005, Webster turned 18 and was officially no longer a “child star”. She marked the occasion by doing a sexy shoot for men’s magazine FHM. She agrees that it had “shock value”.

“It was an interesting time,” she reflected. “I think all 18-year-olds go through that time in life where they’re like, ‘Who am I? What am I going to do?’ It was a tough time to work out who I was. I did Dancing With The Stars and then FHM and it was a moment to show, obviously in a very classy way, that I was getting older, and it was okay to think of Nikki as getting older like everybody else.”

Webster knows that there are people who still can’t see her as having moved beyond the Olympics and 'Strawberry Kisses'.

Just over a decade ago, Webster opened the first of her dance studios. She calls them her “escape”.

“I don’t mind what people think about me because I get to see kids every day perform and find a love for music.”

Webster is mum to Skylah, six, and Malachi, two. She said the dance studios are her children’s “second home”

“With the business that I work in, I’m lucky enough to have my children around when I can and they love it. They love what I do. They’re very proud and my main goal as a mum is to make them proud and to show them that you have to work to support things, and I think I’m doing a good job with that.

So what’s up next for Webster?

“I’ve got lots of things moving in different directions,” she told Mamamia.

She still does occasional gigs, but most of her singing is done in her studios, where she teaches her students. She said her focus is now on seeing them succeed.

“Being in the front row supporting them… to me, that would be the best thing.”

It doesn’t look likely that people will stop singing the song to her anytime soon.

In December 2019, just over a month after being unmasked as Alien on the first season of The Masked Singer Australia, it was announced that Webster would be hosting new reality show Dance Moms Australia.

In a video shared on Instagram, Webster announced the news, calling on kids (and their mums) to audition.

According to the post, Webster wanted dancers aged eight and 16 years old to provide two 60 second videos – one of a dance routine and one of them chatting with their parent or caregiver.

Not only will the winners get to join Webster's elite dance troupe, they'll also eventually get to meet their US counterparts.

"I've been involved with competitive dance as a child performer, an instructor and a mother. It is an exhilarating, entertaining and at times, emotional ride," she said.

"I've got no doubt Australians will be compelled by what Dance Moms Australia will bring to their homes: the drama of competition and conflict where the lines of allegiance aren't always what you'd expect."