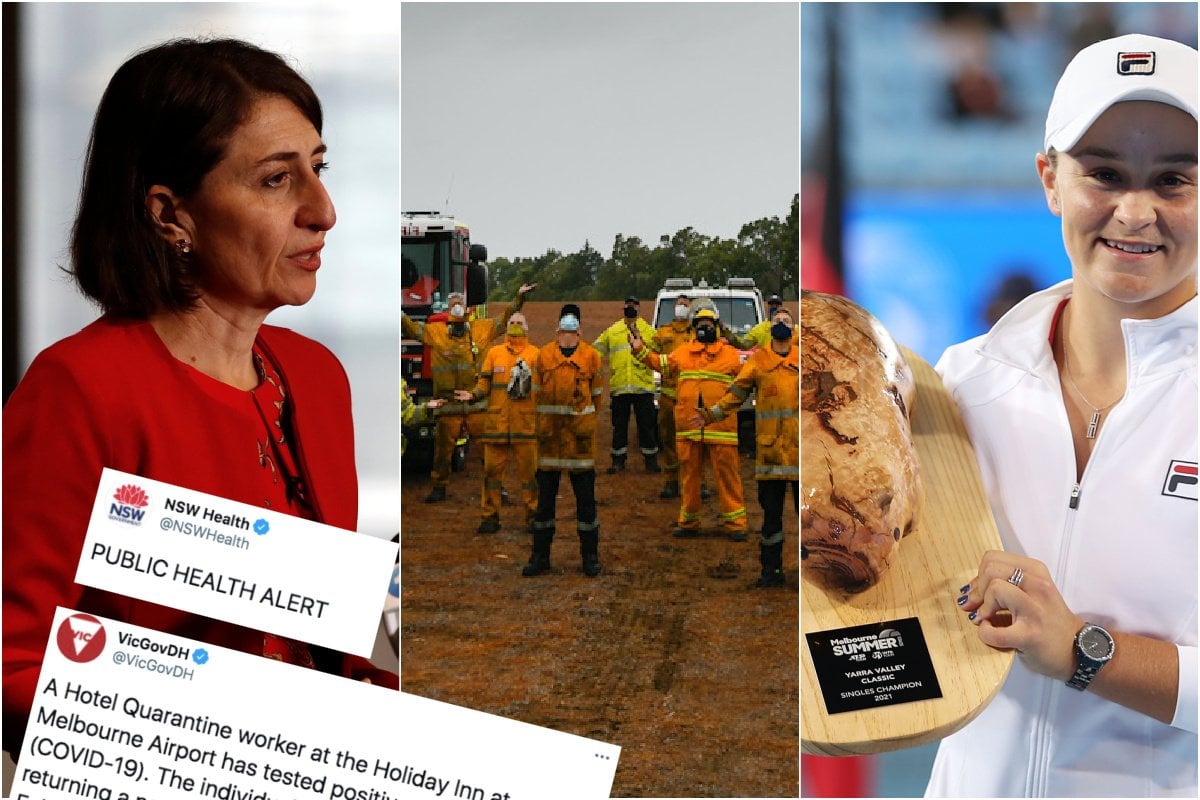 The woman worked at the airport's Holiday Inn on Sunday morning before developing systems.

She was tested and returned a positive result.

She had earlier returned a negative test at the end of her shift on Thursday.

Authorities are contacting Holiday Inn Airport workers and other primary close contacts, who are being told to immediately isolate, get tested and remain isolated for 14 days.

A Hotel Quarantine worker at the Holiday Inn at Melbourne Airport has tested positive to coronavirus (COVID-19). The individual was tested on 4 Feb, returning a negative result. They returned to work 7 Feb, developed symptoms, were tested and returned a positive result.

Thousands of tennis fans had been expected to swarm Melbourne Park for the opening day of the Australian Open on Monday.

No new cases have been detected among a Grand Hyatt hotel quarantine worker's close contacts since he tested positive on Wednesday.

The Grand Hyatt was one of three hotels used as part of the Open's quarantine program and the breach forced more than 500 tennis players and their entourage to isolate as casual contacts of the infected worker.

All eventually tested negative and were released.

A precautionary health alert has been issued for a Sydney cafe and venues in the Wollongong area after a returned traveller tested positive for COVID-19 following their 14-day quarantine period.

Shops, a cafe and a hotel are among the venues where those who visited at around the same time should get tested immediately and self-isolate, NSW Health said in a statement on Sunday night.

The person tested positive on the 16th day after arriving, having returned two negative tests during their 14-day quarantine period, the department said.

NSW Health has issued warnings for a range of venues the person visited in Wollongong and south-eastern Sydney after leaving quarantine and before returning the positive test result https://t.co/vy5YgX8M8a

"Test results indicate that the person has a low level of infection and their household contacts have returned negative results to date.

"Investigations to date suggest the infection was likely acquired overseas and there is no indication at this stage that there was transmission in the hotel quarantine setting."

Close contacts of the case are in self-isolation and are not associated with the venues of concern, NSW Health said.

NSW has introduced non-compulsory "day 16" testing for overseas travellers in a bid to pick up cases that might develop at the tail end of the 14-day incubation period.

NSW Health is carrying out precautionary public health follow-up in relation to a returned overseas traveller who tested positive to #COVID19 on day 16 after being released from hotel quarantine on day 14. pic.twitter.com/K80tfzXVKP

West Australian Premier Mark McGowan has warned arsonists "they'll have the book thrown at them" after dangerous bushfires south of Perth and the loss of more than 80 homes in a blaze northeast of the city.

An emergency warning was put in place late on Saturday as six separate fires posed a threat to lives and properties, with one blaze at Mt Duckworth coming within three kilometres of the local township.

Heavy rain from an intense low-pressure system allowed fire crews to get the upper hand on Sunday, with the threat level reduced to a bushfire advice.

#WoorolooFire downgraded!📣 We think this photo sums up our collective relief. #ThankYou sincerely for your ongoing support. There is still much work to be done & we will continue to work around the clock to keep you informed & safe. 📸 DFES Incident Photographer Morten Boe pic.twitter.com/7PYYWvLweb

WA Police said overnight fires in Yallingup and Injinup appear deliberate and are being investigated by the arson squad and Busselton detectives.

If they were deliberately lit, Mr McGowan said, it was the work of an "appalling human being".

"And they'll have the book thrown at them when they're caught," he said.

"If someone has deliberately done it, well then that is just a disgusting, deplorable and disgraceful act.

"No doubt the arson squad will hunt them down and they'll go to jail."

The situation came after a week-long blaze north of Perth destroyed at least 86 homes and burnt through about 11,000 hectares.

Rain also helped crews bring that fire under control with Emergency WA downgrading the warning to a bushfire advice.

About 300 properties were still without power on Sunday after the fire caused significant damage to electricity infrastructure.

A search has resumed this morning after bystanders on Sunday evening alerted emergency services to what they believe to be a baby wrapped in plastic off La Perouse, in Sydney’s southeast.

Several witnesses told police they had seen the infant wrapped in a plastic bag floating in shallow water around 5pm.

Emergency services are set to start a search off southeastern Sydney after eyewitnesses reported what appeared to be a baby floating in the water. #7NEWS https://t.co/72W83AnnN0

Helicopters, paramedics, water police and divers descended on the area however due to poor visibility and a lack of further sightings, the search was suspended at 7:45pm.

The search is now due to recommence at 7am today.

Nicole Kidman, Keith Urban involved in an altercation at the Sydney Opera House.

Police were reportedly called to the Sydney Opera House after a man "swatted" actress Nicole Kidman with a program during a performance she was attending with her husband and mother.

The Sydney Morning Herald reports a man in the audience of The Merry Widow grew agitated when Keith Urban stood to give the cast a standing ovation last month.

Nicole Kidman and Keith Urban have reportedly gotten into a heated argument with a fan at the Sydney Opera House. The man allegedly hit Nicole with a program, no charges have been laid. #9Today

When Kidman joined him on her feet, witnesses allege the man started a heated exchange with the couple.

He's then accused of "swatting" Kidman, leading Urban to accuse the man of assaulting his wife.

Police were called, but the famous pair did not press charges.

Nine Aussies to play on day one of the Australian Open.

Nick Kyrgios is among nine Australians in action on day one of the Australian Open on Monday, up against Portuguese qualifier Frederico Ferreira Silva.

Kyrgios shouldn't have too much trouble negotiating a way past the world No.184, but does admit to finding it difficult playing without the usual energy from fans with the crowds reduced to 50 per cent capacity.

"It feels strange. I don't think I'm going to experience as good of memories as I have here previously," Kyrgios said.

"Last year when I played (Karen) Khachanov or (Rafael) Nadal, every single person in the stadium was going nuts."

Who's excited for the @AustralianOpen? pic.twitter.com/SxOylcrJas

Three Australian women also take to the court, including Aussie No.2 Ajla Tomljanovic against Misaki Doi, and Lizette Cabrera, who takes on world No.2 Simona Halep.

Barty could hardly be better placed for another deep run at her home grand slam after downing the Spaniard 7-6 (7-3) 6-4 in the final of the Yarra Valley Classic to claim her ninth WTA title in the Australian's first tournament in almost a year.

Melbourne Summer Series trophies have been designed by local Indigenous artists, with each singles champion trophy aligned to a native animal.

Aboriginal people believed he held the knowledge above ground and below – Ron Murray, Wamba Wamba pic.twitter.com/pwRHAZLSlE

"It was probably some of the better tennis that I've played throughout the whole week and Garbine certainly forced me to play at that level," Barty said.

"So it was a great final but (I'm) happy with the progression of the level of tennis through the week."

Australians to get proof of vaccination.

Australians will get a certificate to prove they have had the coronavirus vaccination when it starts to be rolled out in coming weeks.

Government Services Minister Stuart Robert says the evidence will be in both digital and paper form for Australians needing confirmation they have had the jab for travelling or work.

"Australians need to have that record, especially for state public health orders, but also when travelling and borders open up again," Mr Robert told reporters on the Gold Coast on Sunday.

Australians who receive a coronavirus vaccine will carry 'proof of vaccination' certificates under plans being finalised by the federal government ahead of the Pfizer rollout.https://t.co/9bv3xvx9nR

Opposition Leader Anthony Albanese said the government needs to make sure it gets this right.

"We know that they didn't get the tracing app right," Mr Albanese told reporters in Cairns.

"So they need to, as the rollout of the vaccine occurs, make sure that they absolutely get it right because our economy as well as our health depends on it."

The Therapeutic Goods Administration has already approved the Pfizer vaccine for use in coming weeks and TGA head John Skerritt expects to give a final decision on the AstraZeneca vaccine this month.

Australia has secured more than 150 million doses of various vaccines and Prof Skerritt said there are talks with around a dozen companies about potential vaccines in the future.

The government hopes most Australians will be vaccinated by late October.

The Biden administration is withdrawing the US from agreements with three Central American countries that restrict the ability of people to seek asylum at its southwest border.

The move is part of a broad effort to undo the immigration policies of former president Donald Trump.

The Biden administration took steps to dismantle deals with El Salvador, Guatemala and Honduras that allowed the U.S. to send asylum-seekers to those countries, the State Department announced Saturday. https://t.co/gZ6F2uIr5L

Secretary of State Antony Blinken said on Saturday he had notified El Salvador, Guatemala and Honduras the US had started a formal process of terminating agreements that were part of Trump's effort to restrict asylum.

The agreements, which had been on hold since early in the COVID-19 pandemic, required many seeking asylum at the US-Mexico border to go instead to one of the three Central American countries to pursue claims.

- Tens of thousands of people have marched for a second day in Myanmar's biggest city, and thousands more across the country to protest against the military junta's coup and detention of elected leader Aung San Suu Kyi last week.

- It's Super Bowl day in the US with thousands of parties springing up around the stadium as thousands of fans missed out on tickets due to COVID-19 restrictions which saw capacity reduced from 66,000 to 25,000.

- The UK government says a COVID-19 booster in the northern autumn, and then annual jabs are likely.