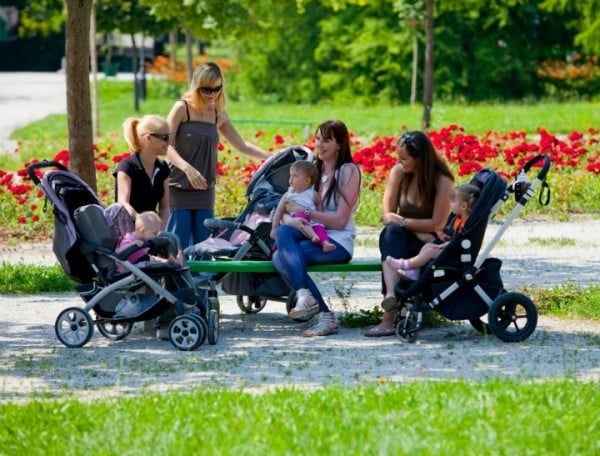 When you don’t have children, to some extent you think you’re bulletproof. The world is your oyster, you don’t have many responsibilities and there’s nothing really tying you down. You can go wherever, and do whatever. You need people, yes, but you can also be very independent.

Before I had babies, I landed a great job and moved 1000km north for it. I didn’t know anyone, bar a few work friends. I was based there for a couple of years and pretty ok with not really knowing anyone.

My now husband joined me just months after I moved, and we decided to have a baby. When our first bub was born, I found myself in a pretty difficult situation. All of a sudden, the fact that I knew hardly anyone (and the people that I did know didn’t have children, and would be moving back down south) REALLY mattered.

A glitch in the public health system up there meant I didn’t get set up with a mother’s group. And it reaches a point, as an adult, where it gets hard to meet new people. So, I had noone to turn to to ask the all important questions like “how are you swaddling your newborn?”, “when are you starting solids?” or “what are you doing about teething?”.

Hell, I had no one to even grab a coffee with or vent with about being completely sleep deprived and doubting myself every step of the way. Going out for a drink with a mummy friend wasn’t an option because I had none.

But this isn’t a pity party. It was tough, yes. But I managed to get through it by, eventually, finding some support.

Finding a group of fellow mums to chat with, vent to and socialise with – your ‘tribe’ as such – is super important. It can be the difference between having a great experience as a new mum or feeling completely lost, isolated and (in some cases) post natally depressed.

So, here are some ideas for where to look:

Mother’s groups – most hospitals and local area health services should set you up with a mothers group after you give birth, and itll be full of mums who have babies of a similar age. However, sometimes they don’t, or you’ve just moved to the area. By the time I gave birth we’d moved out of that particular hospital’s catchment area, and they didn’t refer me on to my new local area health service. But, there are other places you can turn. Read on…

Online apps and sites - there are several apps and websites now that you can use to find and connect with other mums. When I jumped on one of these apps, there wasn’t a group in my area. So, I created one, which was a bit nerve wrecking but within a few weeks I had created a small group with bubs of different ages which was really nice. We went to the local library for baby songs and rhymes, for coffee and to the park. Just search ‘mothers group’ or ‘mums group’ online, and try these:

Joonya - a community of inspiring mothers

Social media - good old social platforms can provide great support. For example, I’m a member of the Northern Beaches Mums group on Facebook, where mums ask questions about anything and everything. It’s super handy. There are loads of pages just like this, just do a search for your area. Instagram also has a lot of mummy accounts and bloggers that will share information. Just do a search for hashtags such as #mumlife #mummyblogger or #motherhood

Join a mum-specific exercise group -  there are specific classes for mums everywhere, such as ‘buggy bootcamp’. Just Google that shit :)

Hit up your local early childhood health centre - they often run groups or courses that help mums get through mum life, and at the same time make friends. And if they can’t help you, they’ll tell you the best place to go.

Playgroups - Playgroup Australia has made it their mission to help families with young children from birth to school age, to learn and develop together through play. They run groups all over the country.

How did you find your tribe?