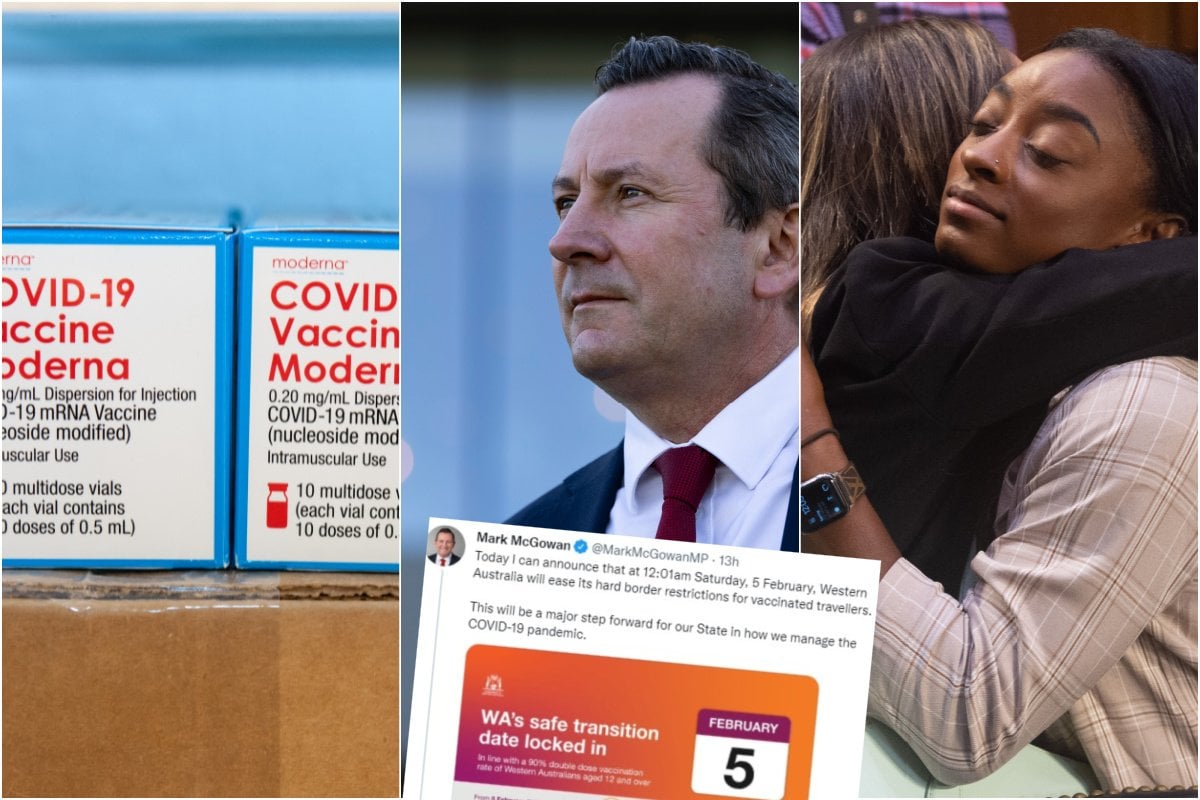 Interstate travellers to Western Australia will have to be double vaccinated when the state's border restrictions begin to ease on February 5.

Premier Mark McGowan announced the long-awaited reopening date on Monday, as the state reached its 80 per cent double-dose vaccination milestone.

The eased restrictions will come with a set of fresh protocols - including interstate arrivals aged over 12 needing to have had both jabs, unless they have a medical exemption.

WA's border controls were first introduced back in April 2020, making it more than 600 days that the state has been what Mr McGowan called "an island within an island".

It's anticipated the WA vaccination rate will have climbed to 90 per cent by February 5.

Under the rules to be implemented on that date, vaccinated overseas travellers will not have to quarantine, unless they are unvaccinated or have not had an approved jab.

Transitional restrictions will include a requirement to wear face masks in high-risk areas, while vaccination proof will be needed to attend some large-scale events and venues.

Skilled migrants and international students can return to Australia from Wednesday, when travel bubbles with Japan and South Korea kick off.

This means travel bubbles with Japan and South Korea, pushed back because of concerns about the Omicron COVID-19 variant, can also go ahead.

Mr Morrison said he looked forward to welcoming back some 20,000 Korean students who would ordinarily come to Australia to study.

"The borders will be reopened both to Korea and to Japan, and for skilled migration and for students, as we conclude the pause that we announced several weeks ago," he told reporters on Monday.

South Korea president Moon Jae-in hoped the travel bubble would lead to a greater exchange and economic revitalisation between the two nations.

Australia to make own mRNA vaccines for future pandemics.

Australia will set up its own mRNA vaccine manufacturing facility to help the country prepare for future pandemics.

The facility will be built in Victoria as part of a partnership between the federal and state governments as well as vaccine manufacturer Moderna.

It's expected the facility could produce as many as 100 million vaccines each year from 2024.

Prime Minister Scott Morrison, who will announce the mRNA vaccine facility on Tuesday, said it would help the country be prepared should there be another pandemic.

Federal minister @AngusTaylorMP on Australia partnering with Moderna to set up a mRNA vaccine facility in Victoria. pic.twitter.com/SPEk3nHkI8

"The new mRNA manufacturing facility in Victoria will produce respiratory vaccines for potential future pandemics and seasonal health issues such as the common flu."

While Australia has been able to manufacture its own COVID-19 vaccines during the pandemic, such as AstraZeneca, it has not been able to make the newer mRNA vaccines.

The country's amount of mRNA vaccines - such as Moderna and Pfizer - has been reliant on supplies from overseas during the COVID-19 pandemic.

Victims of disgraced former USA Gymnastics doctor Larry Nassar have reached a $US380 million ($A530 million) settlement with USA Gymnastics, the U.S. Olympic & Paralympic Committee and their insurers after a five-year legal battle, an attorney for some of his victims said.

As part of the settlement, USA Gymnastics (USAG) and the Olympic Committee also agreed to designate some of their board seats to survivors and to implement other new policies aimed at protecting athletes from future abuse.

"This settlement is about the brave survivors who came forward, forced these organisations to listen, and demanded change," Michelle Simpson Tuegel, who represents over two dozen Nassar survivors, said in a joint statement with Tasha Schwikert Moser, co-chair of the Survivors Creditors Committee.

Gymnasts who were abused by former team doctor Larry Nassar, coaches or others involved in the sport have reached a $380 million settlement with USA Gymnastics and the U.S. Olympic & Paralympic Committee pic.twitter.com/cpFDvdUF8s

"Through this agreement, these survivors are finally being acknowledged and USAG and USOPC are being forced to change so that this sport can begin a new chapter," they said.

Nassar, who had been the main doctor for Olympic gymnasts, was sentenced in federal court in 2017 to 60 years in prison on charges of possessing child sex abuse material.

The following year, he was also sentenced to up to 175 years and up to 125 years, respectively, in two separate Michigan courts for molesting female gymnasts under his care.

And in entertainment news... Globes noms are in.

Aussie Nicole Kidman has landed herself a Golden Globe nomination for playing legendary comedienne Lucille Ball in Being the Ricardos but she may lose out to a former Twilight star.

Kristen Stewart is also up for a gong for her stint as Princess Diana in Spencer, a role that has been touted as Oscar worthy since she took it on.

Other Aussies up for an award include Kodi Smit-McPhee who was also in Being the Ricardos and Sarah Snook who plays Siobhan 'Shiv' Roy in Succession.

The winners will be announced on January 9 but whether we will see any of the ceremony remains unclear after NBC decided to drop the show when critics exposed the Hollywood Foreign Press, the group that casts the votes, for having no black members and for allegedly being heavily influenced by studios.

- Harnaaz Sandhu of India has been crowned the 70th Miss Universe.

- At least one patient has died in the UK after contracting the Omicron variant of the coronavirus, with the new strain now accounting for about 40 per cent of infections in London.

- There have been fewer deaths in the US tornado than previously reported. US officials have the death toll at 64, including six children.

- Hong Kong newspaper tycoon Jimmy Lai who was arrested amid last year’s mass demonstrations against Chinese influence in the country, has been sentenced to 13 months behind bars for urging people to attend the banned Tiananmen Square vigil in 2020.