“It was an avalanche of pain and humiliation,” Monica Lewinsky said during her appearance on John Oliver’s show Last Week Tonight on Monday night.

The 45-year-old was referring, of course, to the public shaming that followed her infamous sexual relationship with then President Bill Clinton.

“You were on the receiving end of one of the worst internet-fueled public shamings of all time,” John Oliver said during the interview. “How the f**k did you get through that?”

Simply, Lewinsky doesn’t know. She describes in the interview feeling as though her “identity was stolen” from her at 22.

What happened to Monica Lewinsky?

In 1995, 22-year-old Monica Lewinsky was hired as an intern at the White House.

She worked closely with Bill Clinton, who was serving his first term as President of the United States.

The two began a sexual relationship in November 1995, which continued until March 1997.

Lewinsky confided in her friend, Laura Tripp, the details of the affair, including gifts she had been given and specific sexual acts that had taken place. Tripp began to record the conversations, which she shared with members of the Independent Counsel in the White House. Their affair began in 1995. Image via Getty.

The story officially broke in January 1998, giving way to one of the most notorious Presidential addresses in modern history.

Clinton infamously stood next to his wife, Hillary Clinton, and maintained "I did not have sexual relations with that woman".

In court, Lewinsky presented a semen-stained blue dress, which provided DNA evidence of her affair with Clinton. Clinton then admitted to the affair.

The 'Lewinsky scandal' is also referred to as 'Monicagate' and 'Lewinskygate' - her name was, and still is, synonymous with an affair she had at 22.

What Lewinsky experienced was a witch hunt. Eighteen years later, she remains the butt of a joke. An object of hate. An embarrassing cliche who made a mockery of the White House. 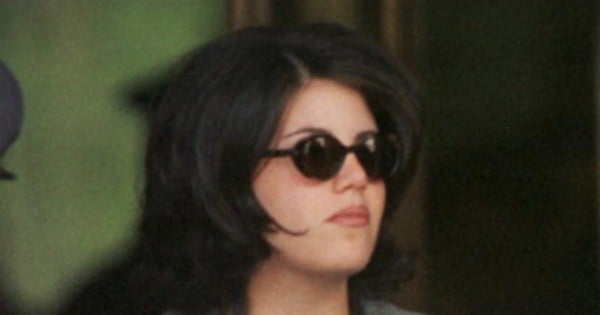 Jay Leno's cruel jab “Monica Lewinsky has gained back all the weight she lost last year. [She’s] considering having her jaw wired shut but then, nah, she didn’t want to give up her sex life", is reminiscent of the tone with which she has been culturally treated.

At the time, she had no defenders.

In 2016, Jon Ronson, author of "So you've been publicly shamed" published an article in The Guardian entitled "Monica Lewinsky: 'The shame sticks to you like tar'".

He interviewed the now 42-year-old, who described her experience as like "...a skinning of sorts. You feel incredibly raw and frightened."

The interview reveals that she came close to attempting suicide. She moved to London and was told she "shouldn’t have come to London because [she] wasn’t wanted there.” She was unemployable.

Video via Miller Center of the University of Virginia

In Ronson's Ted Talk on public shaming, he describes how we often convince ourselves that these public figures are okay.

They're laying low for a while, we reason, but fundamentally they're fine. Ronson's discover was that they're not.

Lewinsky was not, and still isn't, okay.

Public shaming, especially in our technological age, destroys people. And we all have a part to play in that.

Popular culture has bound Lewinsky's name to a blow job. A sexual act loaded with connotations to power and privilege. Jon Ronson author of "So you've been publicly shamed". Image via Getty.

In Ronson's interview she reflects “I don’t actually know why this whole story became about oral sex...it was a mutual relationship.”

Lewinsky had an affair with a married man. She took part in a consensual relationship that was morally dubious.

But surely, 18 years later, we can agree that the 'punishment' is not at all proportionate to the 'crime'. Ronson's work compels us to value the human over the ideology.

To remember that people are not all good or all bad. Social media and the 24 hour news cycle encourages and facilitates bandwagonism like we've never seen before.

We hear of an act that transgresses our own moral code and charge at the individual/s responsible with our pitchforks in hand.

There is much to be learnt from the case of Monica Lewinsky. When we hate and objectify public figures, we rob them of their humanity.

Finding the black and white is easy. We are better than that.

It's time we looked a little deeper, because there we will find the truth; the complex shades of grey.

I watched this interview last night, and I was so impressed by Monica. She was so smart and funny and very honest about how the whole thing had affected her. Really worth watching.

It was indeed a good interview. Though it does feel like this opinion piece is just JO's segment with a couple of words changed and a extra, extra thick layer of assuming we all were had the opinion of "what a slut!" back in the day unfortunately.

I was also impressed by the Ted talk she did a while back. Considering how young she was when this happened, and the impact it's had on her life, I found her very resilient and impressive also.

Let's remember Bill was the one who was married and cheated on his wife and took advantage of his power over a younger woman.