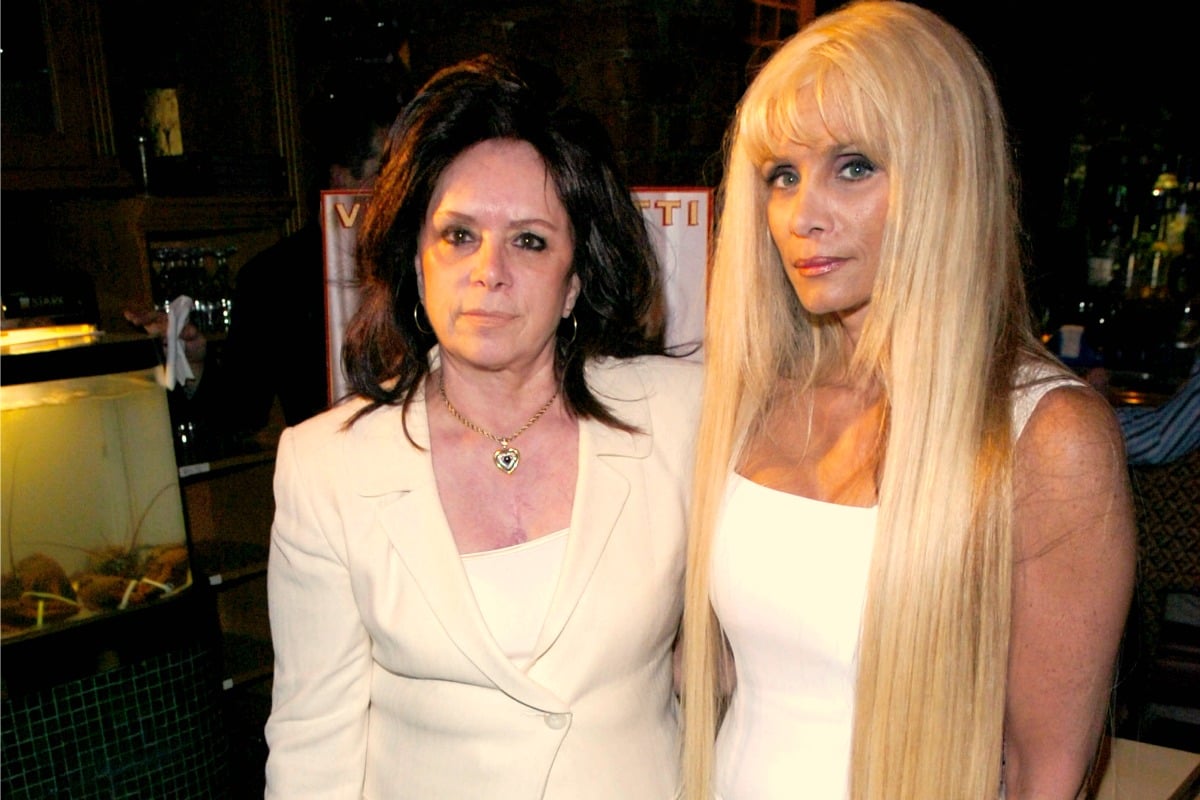 Pop culture and history alike are littered with the names of famous mobsters.

Names such as Al Capone, John Gotti, Machine Gun Kelly and Bugsy Siegel have been splashed across the headlines for decades.

That’s the theme of the new movie The Kitchen, a gritty thriller starring Melissa McCarthy, Tiffany Haddish and Elisabeth Moss as 1978 Hell’s Kitchen housewives whose mobster husbands go to prison, leaving them to take the reins of their rackets.

It’s out August 29, but before you see it, here are the little-known stories of the world’s most fascinating, real-life mob wives:

Victoria DiGiorgio Gotti (pictured above, dark hair) and her family, of both Russian and Italian descent, settled in America for a better life, and as an adult she went on to meet John Gotti at a bar in 1958.

Gotti, who passed away in 2002, was a notorious mob boss and the head of the powerful Gambino crime family. The mob boss was said to be instantly smitten with Victoria when they met and the couple were married in 1962 and went on to have five children together.

From his early teenage years, Gotti was running errands for the mob before rising up to become boss of the Gambino crime family in New York City.

In March 1980, tragedy struck Victoria and her family when her 12-year-old son Frank Gotti was hit by a car driven by the family’s neighbour, John Favara.

Victoria’s son John A Gotti, is also a known mobster and followed in his father’s footsteps to become the interim leader of the Gambino illegal syndicate. While these cases were reported on in the press, Victoria stood up for her husband and her son during the period of their incarceration, but also at times confronted her husband about withdrawing their son from the crime syndicate – even threatening to leave him.

Today, Victoria still lives in Queens, New York. While she does sometimes give interviews about her life, she has never spoken about her own involvement in organised crime, making her one of the few women in this story who was able to separate herself from the mob life. And hence, why she’s the only face we could easily show in this piece.

The first woman in Italy to be sentenced to time in a maximum-security prison was Maria Filippa Messina.

She was arrested in 1995, for her association with the Mafia after taking over parts of the criminal organisation from her husband, Nino Cinturino. Nino was jailed in 1992 after he was convicted of ordering the killing of a rival gangster and his mother, according to the book The Mafia: History and Legend.

Maria was just 26 years old when she took on a role in the Mafia in place of her incarcerated husband. Before she was arrested, it is thought that many other women were also working in the field of organised crime at this time, as confidantes, messengers, go-betweens and unofficial advisers to their husbands and male family members.

Maria Licciardi was known as “The Godmother” and was hailed as the unchallenged crime boss of the Camorra (an Italian mob-type crime syndicate) in Naples from 1993 until her arrest in 2001.

Maria’s entire family belonged to the Camorra, as did her husband, Antonio Teghemié.

It was not until after her husband was arrested, along with her two brothers Pietro and Vincenzo, that Maria rose to power as the head of the crime syndicate.

She was known to be both brutal and wildly clever, choosing to shun the limelight favoured by some of her predecessors so that she would never be convicted of or even suspected of any crime.

During her reign over the Licciardi clan following her husband’s incarceration, Maria generated goodwill among the locals by providing assistance to the neighbourhood’s poorer residents. She was also credited with introducing prostitution trade into the areas she controlled.

With news of her activities finally being picked up by police, Maria was named one of the “30 most wanted Italians” and was forced to go into hiding. She was wily enough to evade capture for just over two years, all thanks to an underground network of protection set up by her mob connections. While in hiding, she continued to be the boss of the Licciardi clan.

It was not until June 14, 2001, that Maria was finally arrested. She spent eight years in prison while still running the crime syndicate from inside, and is now considered a free woman but is thought to have links to criminal organisations.

Griselda Blanco, who was also known as “The Black Widow” and “The Cocaine Godmother” was a Colombian drug lord and was famously a pioneer in the Miami-based cocaine drug trade through the 1980s to the early 2000s.

Blanco’s story has been told in the documentaries Cocaine Cowboys (2006) and Cocaine Cowboys 2 (2008). Catherine Zeta-Jones even brought the character of Griselda Blanco to life in the television biopic Cocaine Godmother, which premiered in 2018, however, there are elements in her backstory that pop culture has glossed over.

Blanco’s first husband was Carlos Trujillo, he and the couple’s three sons were killed in Colombia after being deported there following prison sentences in the United States.

Her second husband and business partner was Alberto Bravo. In 1975, Blanco infamously confronted Bravo in a Bogotá nightclub parking lot concerning millions of dollars that were missing from the profits of the cartel they’d built up together. A shoot-out between the couple led to Bravo’s death and there were later reports that she had her third husband killed as well.

Blanco moved to California in 1984 but the following year she was arrested and taken to New York to face drug charges. After being found guilty, she received the maximum sentence of 15 years in prison, though she reportedly continued to run her empire ruthlessly from inside the prison walls.

On the night of September 3, 2012, Blanco died after being shot two times in the head by a motorcyclist in Medellín, Colombia.

The Kitchen opens in Australia on August 29. Win a double pass to see The Kitchen here.
This content is brought to you with thanks to our brand partner, Village Roadshow.

The wives of New York gangsters in Hell's Kitchen in the 1970s continue to operate their husbands' rackets after they're locked up in prison.

Carmela Soprano all the way!