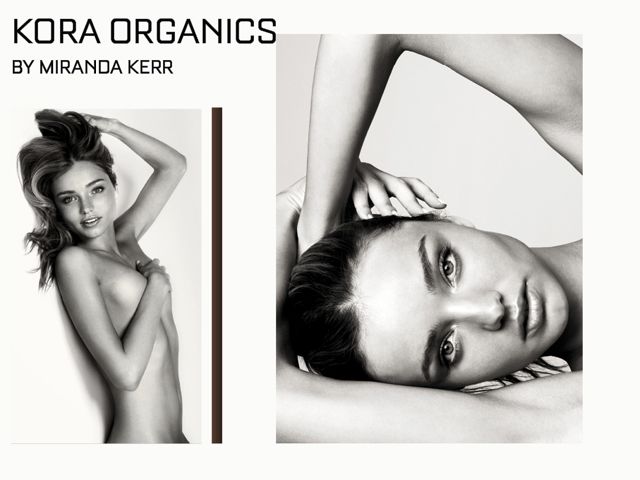 So it appears Miranda Kerr has been Photoshopping herself. Or someone else has. This makes me feel a bit sick and incredibly exasperated. At her and at the messed up world she lives in.

The whole idea of ‘Angels’ is possibly one of the most brilliant, inane marketing ideas of this century. How do you take women modelling lingerie and make sure they don’t seem sleazy? Call them Angels. Give them wings. Bestow on them magic powers to wear g-strings and push-up bras while retaining a wholesome innocence on par with your average 5 year old girl playing dress-ups.

But wait. That’s not even the issue here. The issue is Miranda’s body. Because when she posted the photo this week, eagle-eyed fans who watch all things Miranda remembered having seen that photo before, when she shared it on her Instagram when it was taken in 2012.

Except back then, it looked different. Let’s compare them:

Spot the difference? In this week’s version on the left, it looks a lot like Miranda has had several ribs and assorted internal organs removed – how else to explain the freakishly tiny waist. And even more strangely, it seems that her fellow Angel, Doutzen Kroes has had her waist widened. Maybe Miranda’s missing ribs and organs were transplanted into her model friend? How perplexing.

So how did that happen? With Photoshop. Miranda was made freakishly thin and Doutzen was made bigger.

And who did it? Well, that’s what has people confused.

It was Miranda’s followers who tracked down the original image after noticing the one she posted (which has since been deleted) had been Photoshopped. Many people who saw the shot, presumed the digital alteration had been done by Miranda herself with several commenters posting that they’d suspected the model had been altering her Instagram images for a while.

According to media reports:

Designer Ange Langton shared her view of the image directly on Kerr’s Instgram: “@mirandakerr maybe address this image? It’s been photoshopped very obviously and it might be a good idea to communicate to your fans why it has happened.”

The Fashion Spot commenter Greenlandgem even claims that Kerr has done it before: “I can’t believe no one else has commented on this yet! I noticed starting a while ago that her Instagram photos have been Photoshopped to narrow her waist — as if she needed it anyway. It’s bizarre and totally unnecessary. So disappointing!”

After about 24hrs of this causing a major international fashion scandal (it’s all relative folks), Miranda posted the original (unretouched) shot on instgram along with this explanation:

“Hi guys, here is the original VS image! When I re-posted the photo this week to support the girls I screen grabbed it off the internet when I was working in Japan. I had no idea it was photoshopped. All good intentions- sorry for the confusion and congratulations to the girls for such a great show!”

Let’s believe Miranda. I’m prepared to accept that someone else should be accused of the major douche-baggery involved in making an already exceptionally thin woman look inhumanly, impossibly skinny. But it sure highlights something that has been bothering me for a while now.

Now here’s the part where Miranda’s most avid fans rise up and accuse me of being a bitch or a hater. I’m neither. I follow her on Instagram. I think she is exceptionally beautiful. There aren’t many Australian models who have risen to the level of fame and career success she has. Who was the last one to have global name-recognition? Maybe Elle Macpherson?

So well done there.

But can we be honest here? Her brand is built on walking up and down a runway or appearing in magazine shoots wearing her undies. Or not even her undies. Half the time she’s half naked. Or all naked.

In many of Miranda’s shoots this year, she’s taken her clothes off.  Sure, when you’re a model, you’re paid by other people to portray their vision, not your own. The photographer, the client, the art director, the stylist……models are faces and bodies for hire. Let’s not try to dress modelling up as anything more complex or more noble. Because it’s not.

But in some of the nude and topless shots she’s done lately, the person in charge has been Miranda. For her own brand Kora and.

And yes, of course that’s her right – to take her clothes off or not. A feminist principle is choice and there’s nothing wrong with flesh. And I’d almost be fine with it if the other part of Miranda’s brand – away from the perky boobs and the skimpy undies – wasn’t about treasuring yourself. Literally, that is the name of her book, Treasure Yourself, which, unbelievably, is a self-help book about self-esteem for young girls and women.

Is your brain broken after reading that paragraph because I think mine is.

Treasure yourself? Really? By taking your clothes off? By choosing a career that doesn’t value you for anything other than your face your tits and your arse? People often talk about Miranda Kerr being a role model and this has always baffled me. She is certainly an example of someone who has risen to the top of her profession – modelling.

Which is impressive, for sure. But let’s be clear, the apex of the modelling industry, the absolute top of the tree in 2013 in terms of commercial success is being a Victoria’s Secret Angel and getting to wear absurdly over-sized angel wings as you walk up and down a runway in a g-string and a push-up bra with actors and male pop stars learing at you from the audience and a global audience of men watching you on the Internet while pleasuring themselves.

Or if you’re really lucky, you might get to dress as a sexy bicycle. Or show the world your bum.

How is that a role model? It’s sure not one I want for myself or my future daughter or in fact any girl or young woman.

Miranda’s ‘brand’ is indeed a bizarre mix of tits and arse and touchy-feely inspirational quotes like this [warning: be prepared to get whiplash]

Who does all that treasure exactly? Isn’t it all just a bit inconsistent and hypocritical? Are you actually encouraging girls to treasure themselves by promoting a job where you’re judged and valued 100% for the way you look before being chucked on the scrap heap around age 30? An industry where even someone at the top of her game is still not considered skinny enough and must have her waist hacked into with photoshop to look even thinner?

Doesn’t sound like the kind of treasure young girls should be hankering after.

It's very hard when relying on the 'mainstream' media, not that it remotely deserves the title, for accurate information on 'news' stories, let alone trying to wade through this constant glamorisation of reality that media uses to indoctrinate our senses daily. The Miranda projection is part of the latter fantasy, focused on meaningless narcissim for commercial advantage through every sentence. It's a new kind of propaganda designed to encourage the cult of individuality (the kind that gets the right to spend and shop and have above all else) and consumerism, at the cost of what used to be meaningful values - social cohesion, social co-operation, altruism, tolerance, sharing and caring without a self-centred payoff. Those ideas are seen as passe nowadays and only seem to take shape through the daily wisdoms of Oprah or Dr Phil.
I found your article not only enlightening and incisive but intelligent in its analysis. These are the energies behind such projections of 'beauty', 'sex' and 'success', celebrity - all elements morphing into the same carrot for young female readers, and perhaps young males as well. These stories are not about the girl from Gunnedah doing 'good' or the lure that you can have it all if only you deliver a sultry come to bed pout and hook up with a handsome movie star. It's about legitimising what is pure commercial exploitation for yet again, financial gain. In Miranda's case, her personal choices and that's as it is. But in the process, as you pointed out so well in your article, hooking into the emotional background of those it's aiming at. The vulnerability of teenagers and young adults, maybe even older adults, who want the belonging, inclusion, identity that these fantasies put out.
I agree with your views and again, am grateful when I get to read words that cut through the spin and deliver intelligent analysis and relevance to what is becoming an increasingly 'fantasised and inauthentic' world, that has little to do with the experience of people's day to day lives.

I LOVE Miranda but she sends mixed messages in the form of her support for all things organics but then is the face of a shampoo company who's products main ingredients are the same chemicals Miranda's own website warns it's follows to fiercely avoid! It's a mixed and confusing message!!!