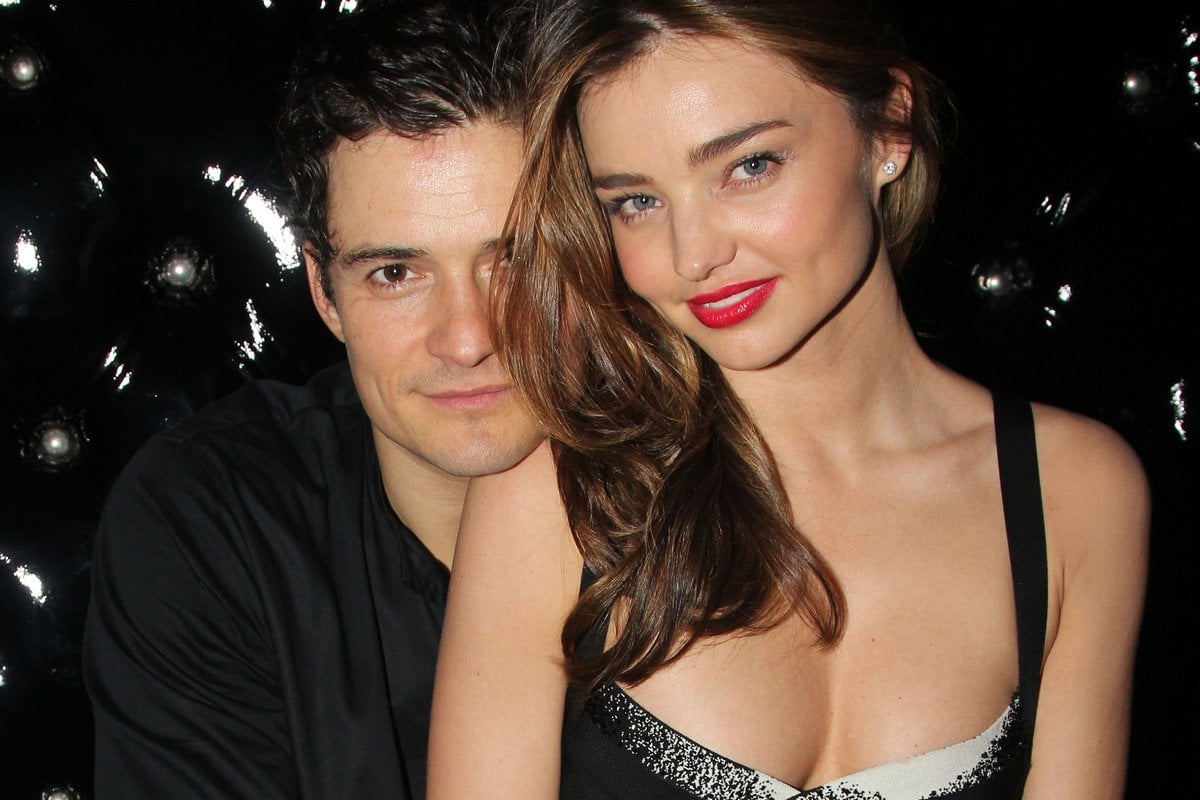 During the mid-to-late 2000s, Miranda Kerr and Orlando Bloom were the It couple.

She was the first Australian to become a Victoria's Secret Angel, and he was Will Turner - the blacksmith-turned-pirate we all swooned over in the hit Disney franchise Pirates of the Caribbean.

After three years of dating, the couple announced their engagement in June 2010. They married the following month and welcomed their son, Flynn, in January the following year.

But as you'd know, they didn't last - Kerr and Bloom separated and divorced in 2013, and have both formed new relationships and welcomed more children since.

Here's a look back at Miranda Kerr and Orlando Bloom's relationship, and what their lives look like now.

Miranda Kerr and Orlando Bloom first crossed paths in 2007, when both of them were at the height of their success.

It was that year Kerr, 25, became a Victoria's Secret Angel, while Bloom, 31, was in the middle of promoting the third instalment of Pirates of the Caribbean.

The Gunnedah native said she was "reluctant" to go out with the actor.

"Not [reluctant] about him, but the idea of [him being a movie star]," the model told Sunday Night. "I think it was his persistence [that won me over]."

It wasn't until April 2008 that the couple went public, when they attended the Randwick Races in Sydney, Australia, a day after the actor met Kerr's parents. 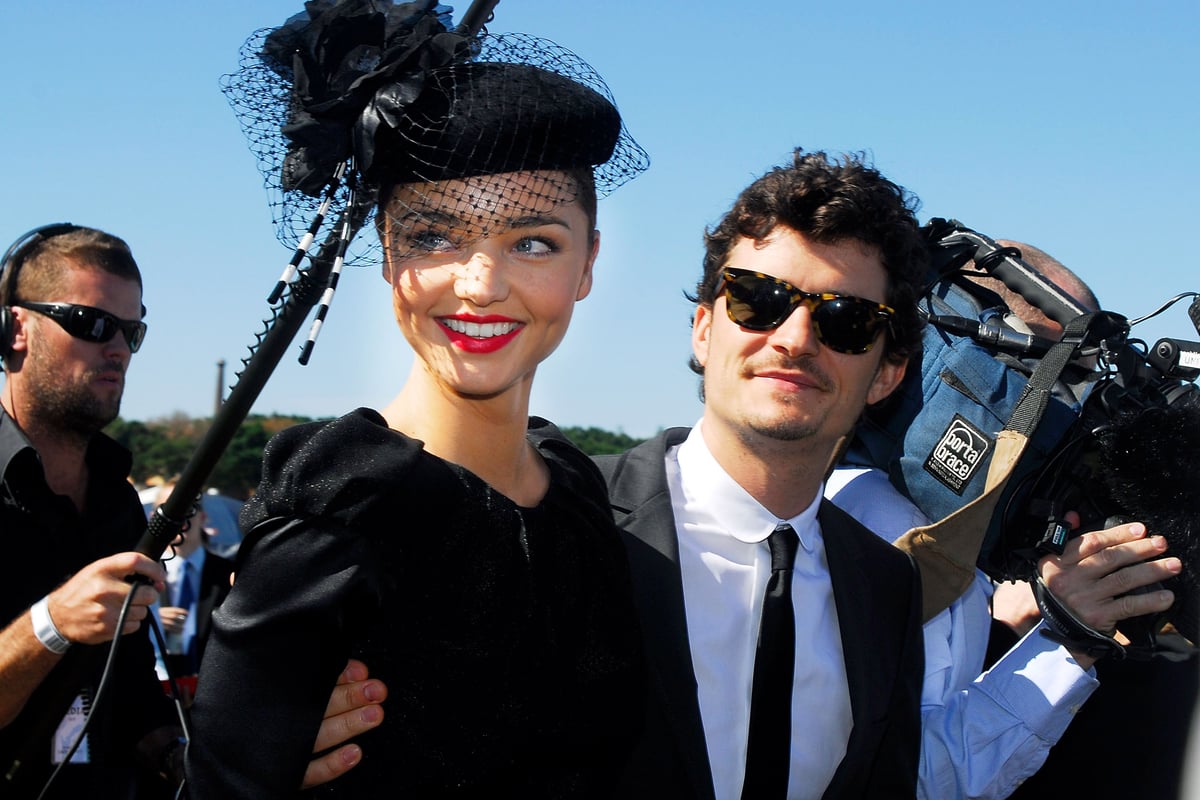 Kerr and Bloom at the Randwick Races. Image: Getty.

From the early stages until the end, Kerr and Bloom were notoriously tight-lipped about their relationship, and dodged engagement rumours for years - even when Miranda was spotted with an impressive rock on her ring finger in 2009.

In June 2010, Bloom's rep finally admitted it – the world’s most genetically perfect couple were getting married.

Just a month after they confirmed their engagement, Kerr and Bloom married in an intimate ceremony. And the month after that, Kerr confirmed she was four months pregnant.

"I've always been open about wanting to be a mother one day," the model told Sydney Morning Herald, according to Racked. "And I've always thought Orlando would be a great dad."

At 24 weeks, she became the first model to appear on a Vogue cover pregnant, posing for Vogue Australia.

The couple announced his birth via Kerr's blog: "He weighed 9lb 12 ounces (a very healthy and big baby boy).

"I gave birth to him naturally; without any pain medication and it was a long, arduous and difficult labour, but Orlando was with me the whole time supporting and guiding me through it. I could not have done it without him." 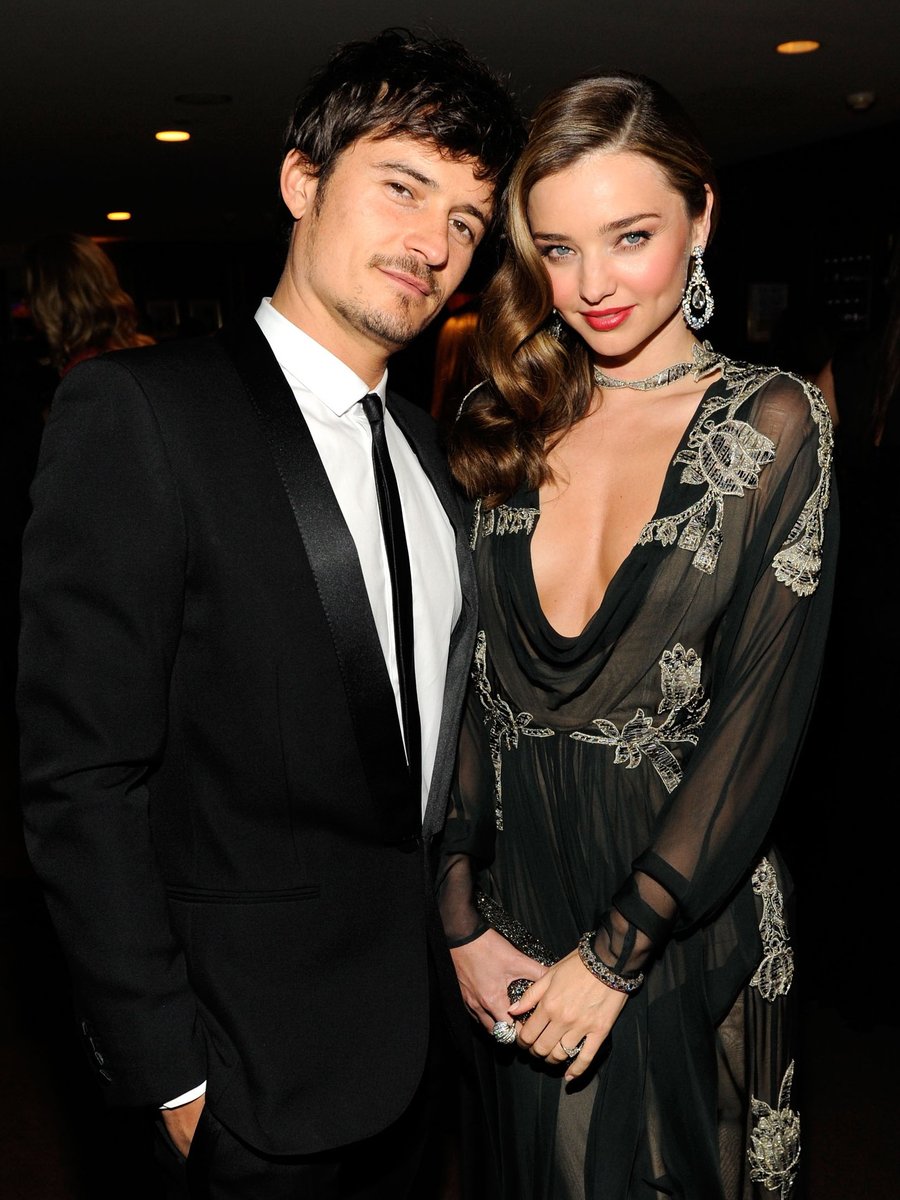 The couple months before announcing their split. Image: Getty.

But their relationship was soon rocked by rumours, with tabloids suggesting cheating or a separation.

After attempting to silence those rumours by attending the 2013 Golden Globes together, the couple announced their split in October that year, and soon after, finalised their divorce.

"Despite this being the end of their marriage, they love, support and respect each other as both parents of their son and as family," their reps said in a statement.

Following her divorce, Kerr said she was in no way interested in dating again.

In fact, when speaking to ELLE, the supermodel admitted just how much the relationship ending affected her mental health.

"When Orlando and I separated, I actually fell into a really bad depression," she told the publication.

But it was only a year later she met her now-husband, CEO and co-founder of Snap (the parent company of Snapchat), Evan Spiegel. 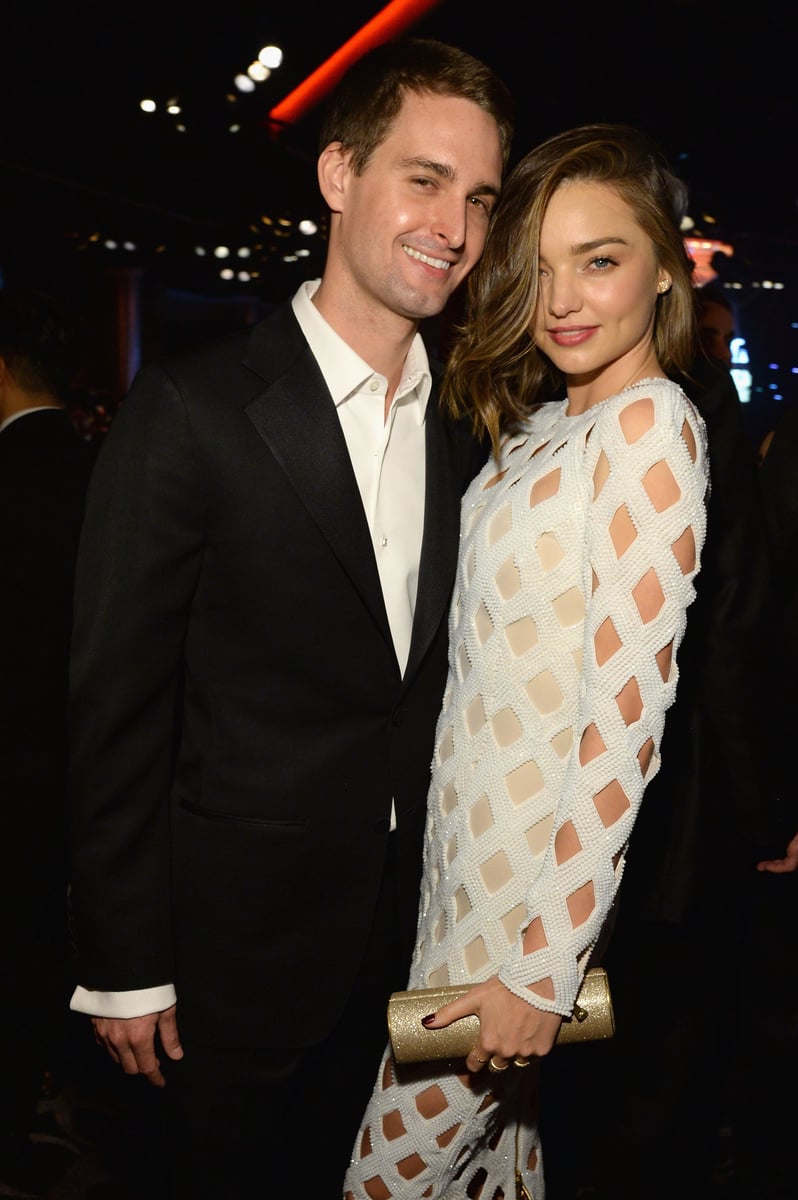 The pair met in 2014 at a Louis Vuitton event at the Museum of Modern Art in New York, where Kerr was sat next to the tech billionaire.

"I was going through quite a challenging stage. I didn’t really believe in love anymore," Kerr recalled to Vogue Australia in July. "I felt a little bit overwhelmed with what had happened."

"He was so patient with me," she continued. "Our relationship evolved slowly. And we established a nice friendship before we became boyfriend and girlfriend. I never even thought that this kind of love was possible."

Kerr made the announcement in an Instagram post using Bitmojis, a company Snap bought for $144 million AUD. And the following year in May, the couple tied the knot.

The wedding was an "intimate affair" with 45 guests in attendance.

According to a source: "All guests arrived in black limos and vans with tinted windows. The guests were picked up at secret checkpoints and driven to the home."

In May 2018, the couple welcomed a baby boy, Hart, named after Spiegel's grandfather, and in October 2019, they welcomed another boy, Myles.

These days, Kerr and Spiegel live between their reported $144 million AUD mansion in LA and their rural farm in the Hunter Valley, New South Wales.

Speaking to Vogue, the model, now 39, explained how the NSW home was the first place she took the Snap CEO in Australia.

"I said to him back then, 'This is amazing, I wish this place was for sale,'" she recalled, before sharing that during the pandemic, four generations of her family lived under that roof.

"We had always dreamed of all living together and we got to experience that, at least for the last few months," she said.

Kerr also spoke about co-parenting with Bloom and his partner, Katy Perry - something she's talked about various times before.

"Co-parenting with Orlando and Katy is something that I feel really happy about," Kerr told the publication.

"From day one when Orlando and I decided to separate, I said, 'Listen, whatever we do, we have to put Flynn’s needs first, not our own.' That’s the way we make our decisions."

She added: "Family is my number-one priority."

From what we've seen, the four get along quite well.

When Katy Perry and Orlando Bloom first met at a benefit for the Children’s Defense Fund in April 2013, both of them were in other relationships.

At the time, Perry was two years out from her divorce from Russell Brand and dating fellow singer, John Mayer. Bloom was still married to Miranda Kerr.

It was a Golden Globes after-party that would officially bring them back together.

"We bonded over an In-N-Out burger about three years [ago] at the Golden Globes. He stole one off of my table," the singer told Jimmy Kimmel in 2019.

After several months of rumours, the pair confirmed their relationship in May 2016 while they were both at the Cannes Film Festival. 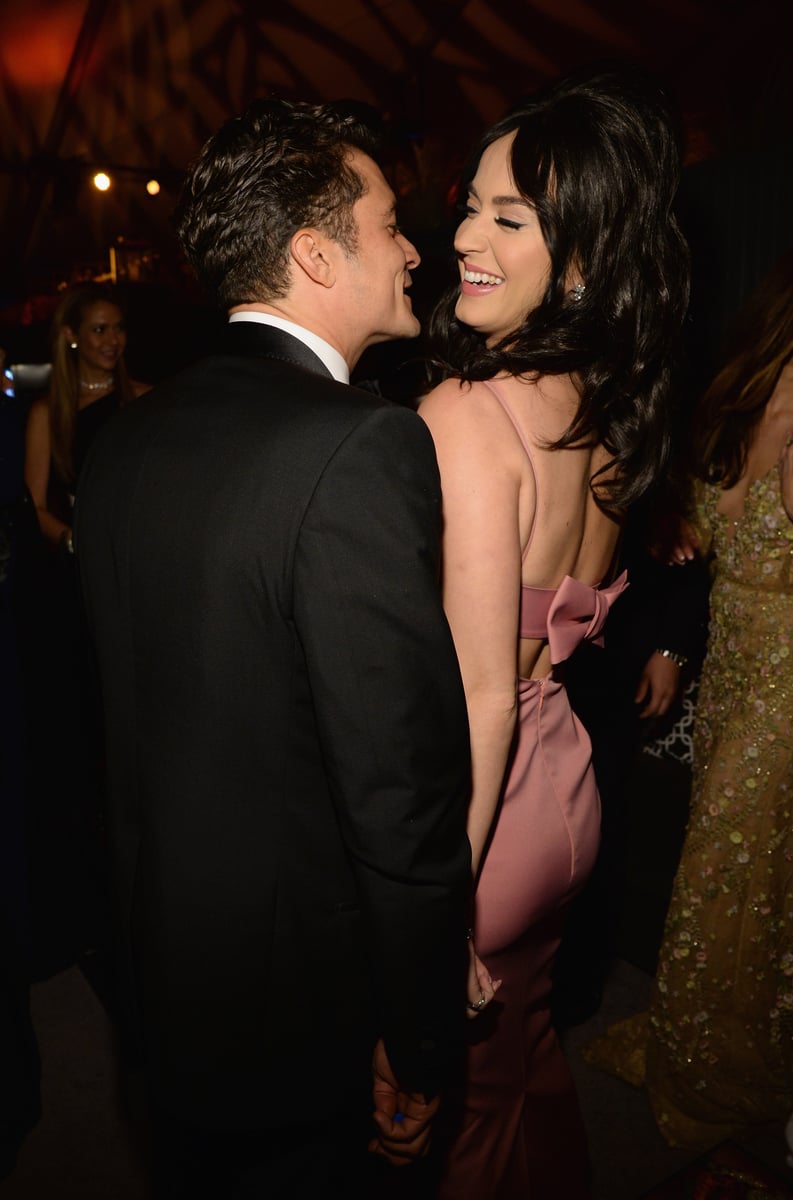 Within 10 months of making their relationship official, the couple released a joint statement announcing they were taking some "respectful, loving space" away from each other on February 28, 2017.

"Before rumours or falsifications get out of hand, we can confirm that Orlando and Katy are taking respectful, loving space at this time," they wrote.

By August 2017, the pair were seen again together in public. But it wasn't until May 2018 that the pair confirmed their relationship.

On Valentine's Day in 2019, the Pirates of the Caribbean actor proposed mid-helicopter ride.

"It was Valentine's Day and I had to work that day," Perry told Roman Kemp on Capital Breakfast. "I just remember meeting him at dinner at this place, this Italian restaurant, because when I get a pass, I just want to stuff my face with pasta."

"So I get there and, I mean, he's like clean-shaven. He's not wearing tennis shoes. I'm like, 'Ah sh*t, something is going down!'" Perry continued.

"I got on a helicopter and he asked me to marry him, and then we landed on this building and then went downstairs and my family and friends were there and the most flowers you've ever seen."

In March 2020, the couple announced they were expecting their first child together.

After sharing the news in a music video for Perry's song 'Never Worn White', they announced they're expecting a baby girl.

Perry also confirmed the pregnancy was "no accident" and they’re "both looking forward to this new interval of life and sharing this".

In August, the couple welcomed a daughter, Daisy Dove.

"Welcome to the world, Daisy Dove Bloom! We are honoured to introduce Goodwill Ambassadors @KatyPerry and @OrlandoBloom’s new bundle of joy."

"We are floating with love and wonder from the safe and healthy arrival of our daughter," the couple wrote on via UNICEF's Instagram account.

In a recent interview, Perry, now 37, discussed her support system and plans to expand her and Bloom's family.

"I have great support," the singer told People. "I have a great sister. I have a wonderful nanny. And Orlando really taps in."

She added: "Of course [I want more kids]. Hopefully, in the future."

Funnily enough, the family-of-three are also currently in Australia, living in Cairns while Bloom, now 45, films his latest movie, Wizards! with Pete Davidson.