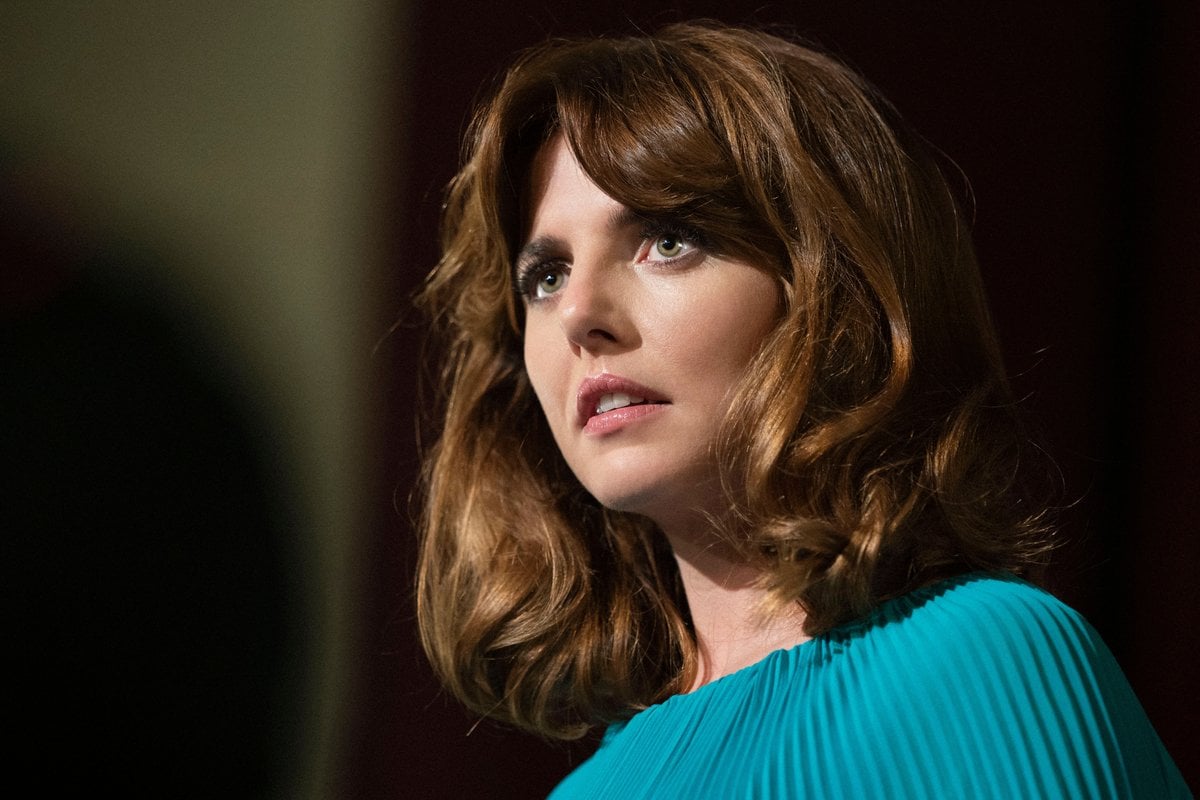 Ophelia Lovibond is now somewhat of an expert on early 1970s feminist literature.

Lovibond stars as Joyce, a feminist with a long-time dream of starting a radical magazine titled The Matriarchy Awakens. After her vision is crushed, repeatedly, by old male execs ("Why is she so angry?" one asks), Joyce reluctantly joins forces with Doug (Jake Johnson), a publisher who specialises in adult magazines, to bring her vision to life... with a few compromises.

"Don't get me wrong, it's good," Doug tells her. "You've just gotta hide the medicine. It's like when you give a pill to a dog, you dip it in peanut butter first."

It's not smooth sailing, obviously. There's a disgruntled politician and police raids to contend with, and Joyce is not always receptive to the amount of penis within the pages.

Her intense nature is played perfectly - and hilariously - by Lovibond, who spoke to Mamamia ahead of the series release.

To understand Joyce, the actor went deep into her world.

"I did lots of research," she says. 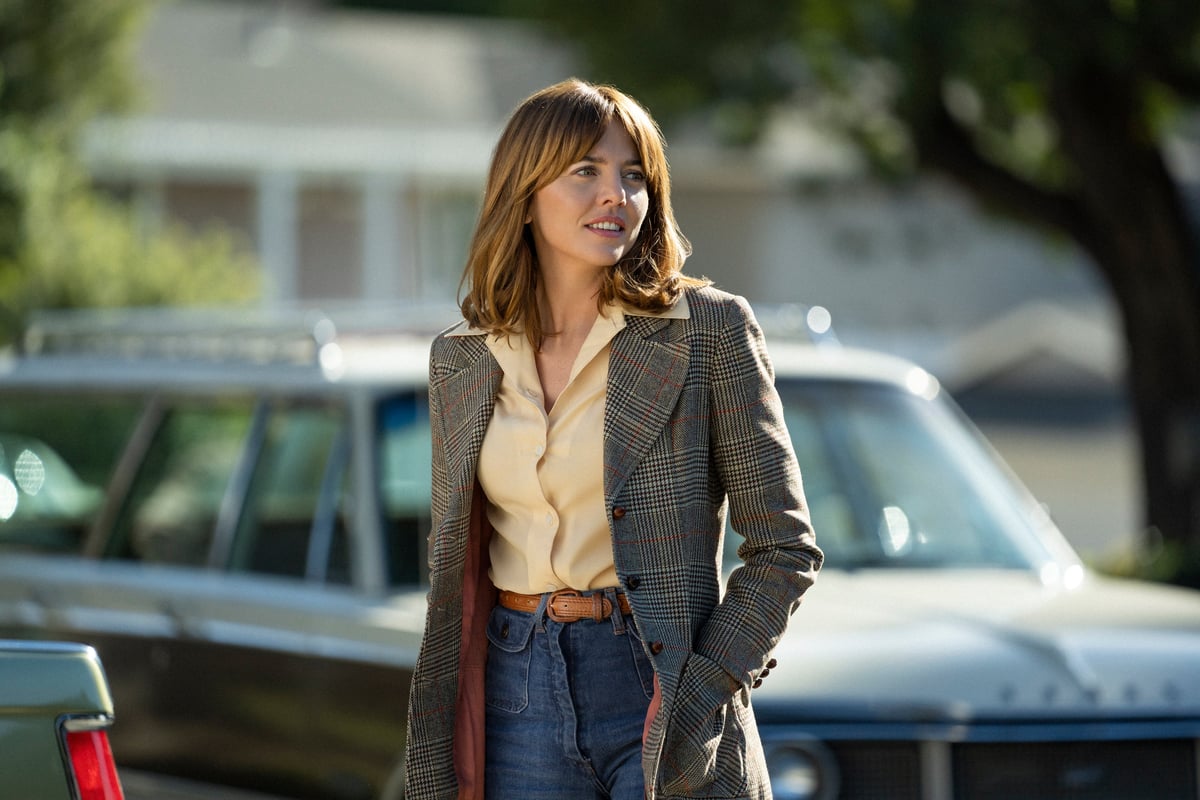 The other thing she latched onto was Joyce's single-mindedness. She'd been thinking about her magazine for years and faced many rejections, yet she kept going - and was very resistant to changing her vision.

There's a moment early in the season of Minx, where the supporting characters are trying to help an uptight Joyce bridge the gap between a serious feminist think piece and a full-frontal penis photoshoot.

"It's a game, you match the man with the penis," Jessica Lowe's delightful Bambi explains.

"We thought it might be a little bit shocking to flip from your article on female genital mutilation straight into a two-page spread of that fireman's dingle dong."

"You need a transition," Joyce's sister Shelly, played by Lennon Parham, continues. "Kind of like a scoop of sorbet in between courses."

It's a scene that sums up Joyce and the eclectic group of colleagues she works with on Minx, the magazine.

But it also perfectly explains the tone of Minx, the TV show. 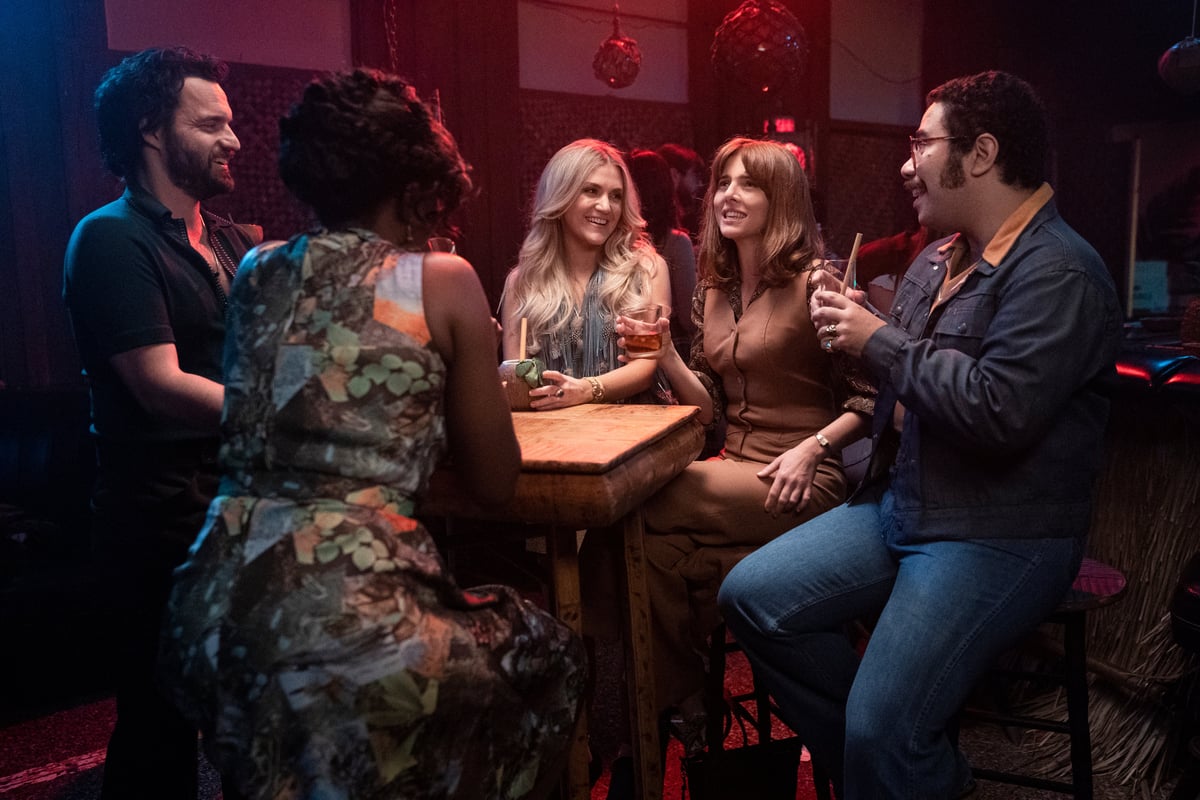 Minx comments on feminism and bias in a really sincere way, but it's also just a genuinely joyful and funny watch.

"Some of the issues that we are addressing, they are big feminist issues. But they needn't be dour, you can have humour there," Lovibond says.

"You're more likely to appeal to someone and have someone listen to you if you're ensconcing it in a way that is funny rather than shouty.

"It felt like there were parallels all the time throughout the series that continue to reflect the tone of the show in some of the storylines. It's all kind of meta."

Lovibond credits that to what she calls writer and creator Ellen Rapoport's "genius factor".

"She's got such a clear mind and vision of what the show was going to be, she was such a strong leader on set. If ever you were unsure about how to play something Ellen would have an immediate answer for you that was very clear. So, that kind of kept us toeing the line in the right way."

Each episode divulges more about not just Joyce or Doug, but the entire supporting cast. All the characters are well-rounded, nuanced and interesting.

This is a writing success, but the chemistry between the cast also helps. They bounce off each other so well, it's unsurprising to learn everyone quickly became friends in real life.

"It was an absolute dream, honestly, going to work," Lovibond says.

"It felt like a day at the spa. We've all become incredibly close friends. We were so lucky. I gush about them so much I sound like their mum! You can't predict whether you're going to gel with people or not, but for all of us to get on as well as we did was incredibly lucky."

Minx is very much set in the 70s. The sets, makeup and wardrobe (including Johnson in brown leather pants, FYI) make that very obvious. 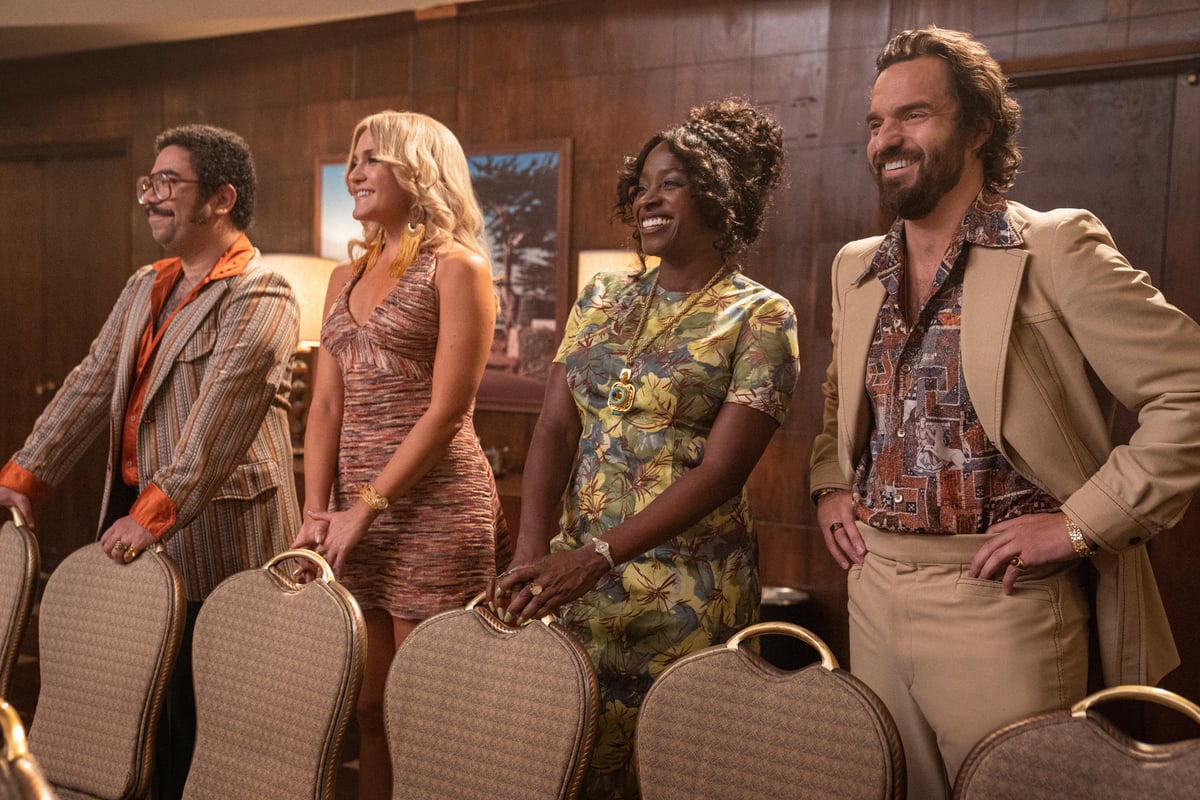 However, it's striking that there are also plenty of topics explored that still feel true to women's 2020s experience. Joyce takes on cat-callers, and the black and white attitude towards women's sexuality is a theme throughout.

So while it is a period piece, Lovibond could "absolutely, unfortunately," relate to many of the storylines.

"At the moment there's a campaign in England to make misogyny a hate crime," she said.

"There are things that I experience all the time... You come to expect it really, you've got various tactics of rebuffing it that you've developed and that's something that's been interesting [to unpack]. I think lately people have been sharing how commonplace it is and, you know, tactics that we use to get home and things like that. There were things that were familiar."

Another aspect of the show likely to get people talking is the regular appearance of... penis.

Minx follows in the footsteps of shows like Euphoria and Pam & Tommy in its use of nudity, especially of the full-frontal male kind. In the pilot, there is a montage of naked men as the characters search for a centrefold model.

Intimacy coordinators were on set to make sure everyone was safe, secure and supported, and centrefold model Shane (Taylor Zakhar Perez) wears a prosthetic penis.

"It was all approached very professionally," Lovibond said.

"Once upon a time you used to just improvise those things. I've done intimacy scenes, and I think it would be like driving around without a seatbelt on. That's just so stupid, we think 'of course those safety measures should be there'.

"You'd never do a stunt without a stunt coordinator and it's the same reasoning behind it, to make sure everyone's safe and nothing unexpected happens and everyone's boundaries are respected."

The premise of Minx may have viewers expecting a raunch-fest, and there is plenty of risque material.

But the show is also nuanced, celebratory and most importantly, so much fun.

Minx premieres 17 March, same day as the U.S. and only on Stan