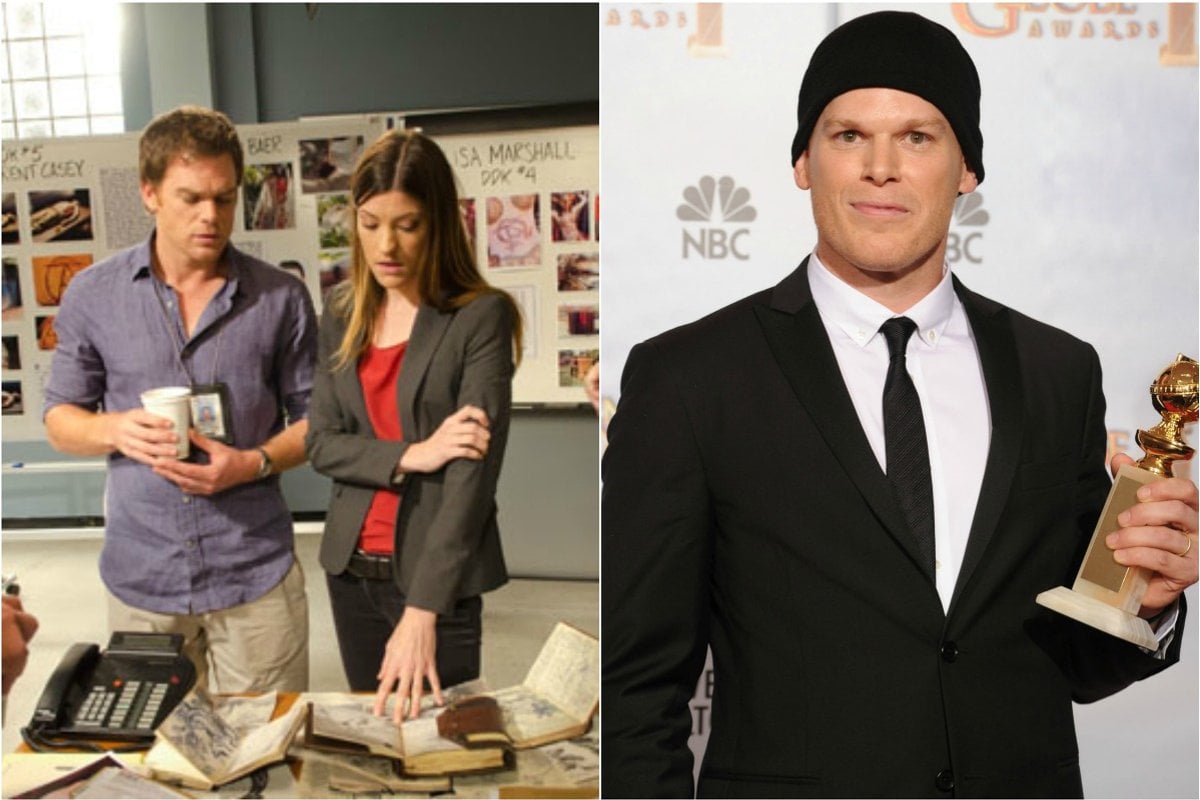 Dexter Morgan is about to be back on our screens and hello 2013 time warp.

After devouring 96 episodes over eight seasons, and repeatedly questioning why we were rooting for the murderer, the Dexter finale is to this day one of the worst series send-offs in TV history.

But finally, after seven long years, it appears Showtime has heard out pleas for closure.

Watch: A reminder of how Dexter ended after eight seasons. Post continues after video.

This week, Showtime announced it was reviving Dexter for a 10-episode limited series, with production scheduled to begin in early 2021 ahead of an end of the year drop.

But with a good year wait on our hands let's see what Dexter - aka actor Michael C. Hall - has been up to all these years.

Raised by a widowed mum and a career that started in Broadway.

Hall, 49, was raised in North Carolina as an only child, after his sister died before he was born as a baby.

When he was 11, his father died from prostate cancer, with Hall describing to The Advocate how the loss shaped his life:

"Certainly, for a young boy, there's no good age, but I think I was on the cusp of a time in my life where I was starting to reach puberty, to relate to my father. To have him... Something gets frozen," he explained.

Hall originally wanted to be a lawyer, but having acted all through high school went on to study acting at the New York University's Tisch School of the Arts. He started his career on Broadway in productions including Chicago and Cabaret, before starring in his first TV drama Six Feet Under in 2001 when he was 30 years old.

He then got his big break with the titular role of Dexter Morgan on Dexter, which he played for eight seasons from 2006 to 2013, affording him five Emmy Awards nominations over the years. 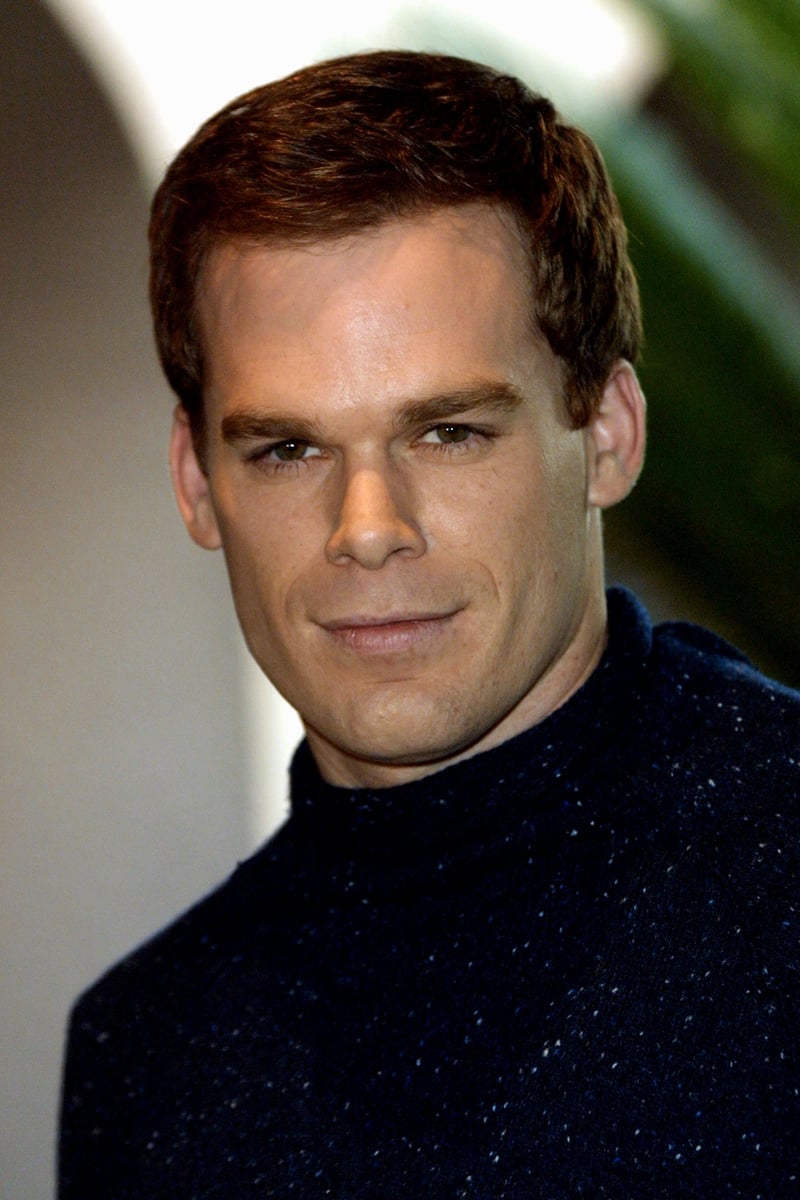 Hall in 2006, the year he started on Dexter. Image: Frederick M. Brown/Getty.

The popular series about a blood splatter analyst by day and serial killer by night has consistently ranked among the best crime dramas, but Hall admitted during a 2013 interview with The Writer's Room that he nearly turned down the role.

"My initial general response to the idea of it was aversion. I didn’t want to make another open-ended commitment to a character surrounded by dead bodies," he said.

As the name suggests, Six Feet Under was also about death, with the show centred on a funeral home business.

Ultimately Hall decided Dexter was too unique a character to turn down.

"I wasn’t going to get the opportunity to do anything like it anywhere else, so I took the leap," he said.

When the show ended, Hall said he had to "re-learn" how to play characters with emotions, after spending seven years shedding away the "emotional mirroring" he'd learnt at acting school.

Since Dexter, he's played John F. Kennedy in The Crown, starred in crime drama Safe, and has performed with the band Princess Goes since 2018.

He also appeared alongside Daniel Radcliffe in Kill Your Darlings in 2018.

His relationships and opening up about his sexual fluidity.

In 2002, Hall married fellow actress Amy Spanger who he starred alongside in the musical Chicago. 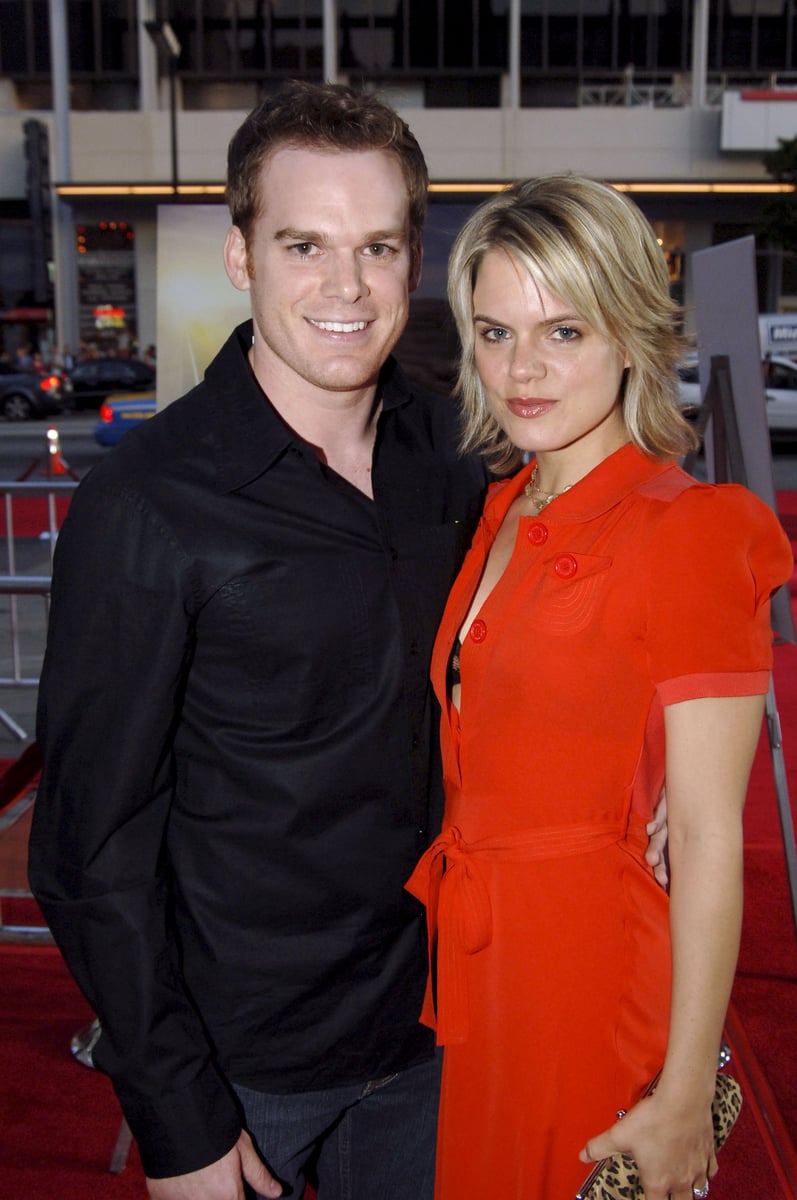 The couple divorced in 2006. The following year, the then 35-year-old began dating his Dexter co-star Jennifer Carpenter, who played his sister on the show.

After two years of dating, the couple eloped on New Year's Eve 2008.

Carpenter spoke to On Demand Entertainment in 2019 about working with her husband, saying: "It's easy to work with people that you trust and respect. At the end of a 12 or 13 hour day it's pretty easy to drop a character and want to go home and be a normal person and veg on the couch."

"It created a great base for our relationship to see eachother on a day-to-day basis," she said.

In an interview with Ellen, Hall described his wife as "astonishing". 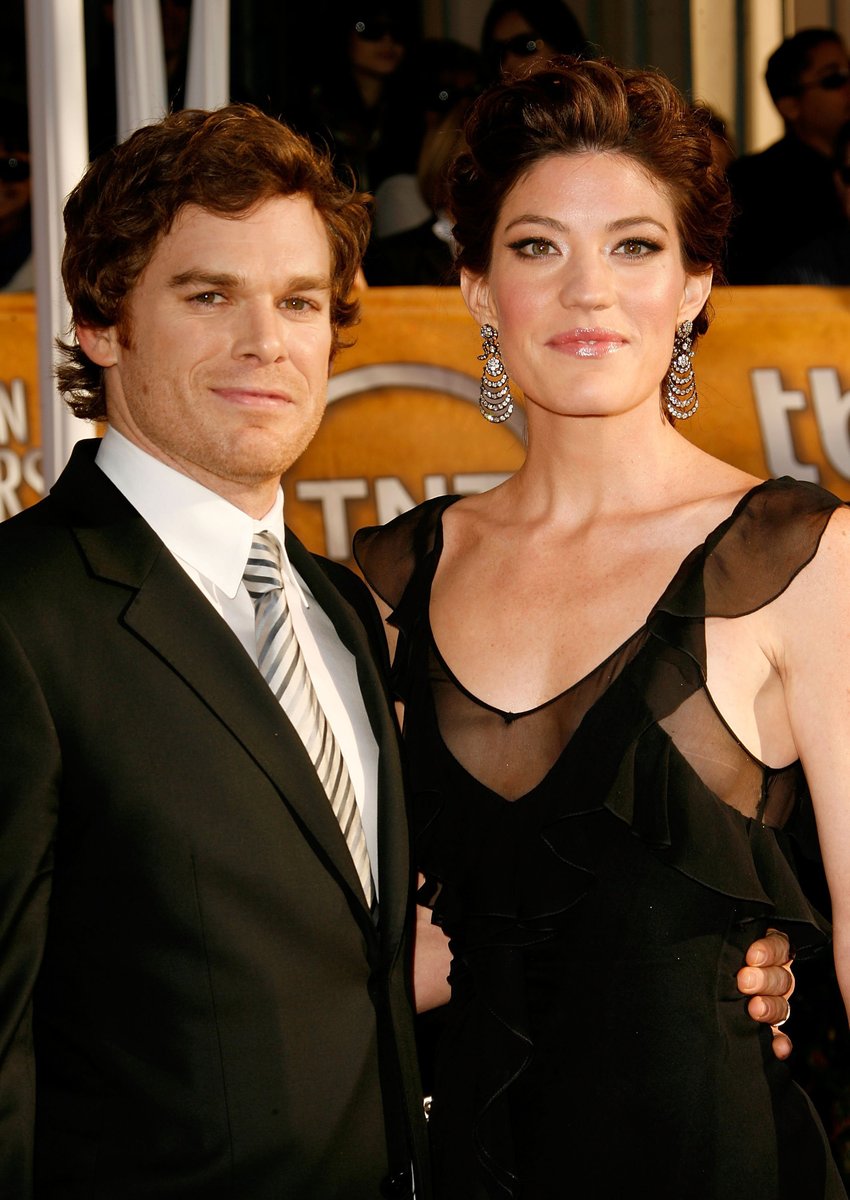 However, the couple divorced in 2011, with Carpenter telling Today, "Has it changed anything? Yes. [But] he is and always will be one of my best friends in the world. And just because the marriage ended doesn’t mean the love isn’t still there. We take very good care of each other and our cast — we always have — and I’m just really lucky."

In 2016, Hall married book critic Morgan Macgregor, after six years of dating. The marriage came as a surprise to many who hadn't even known they were together.

While the couple has continued to keep their relationship private, Hall told Daily Beast in 2018, "She’s just an incredible friend and is a remarkable combination of intelligence and kindness, and she’s able to tell me the truth that in a way that I can actually stomach.”

On the topic of children, Hall said at the time it was something they were "talking and thinking about" but "it’s no news to anyone but it’s a crazy world, and bringing somebody into that world for a front-row seat is something that gives me pause."

In 2020, the couple live together in New York City. Neither have a public Instagram, but Hall did join Facebook in 2017, which he used to promote a Dexter themed t-shirt that was raising money for a hospital in Bangladesh. Since then, he hasn't posted at all. 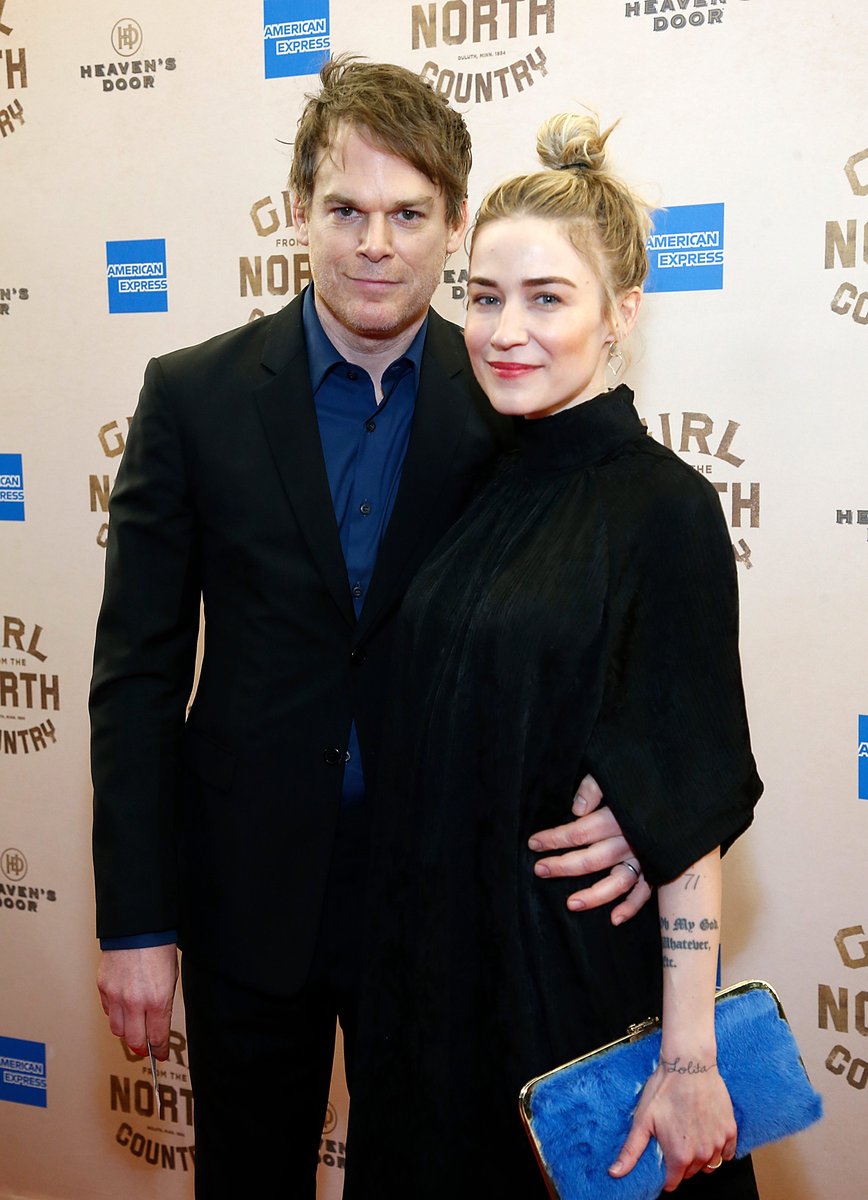 In 2006, Hall was asked by Jonathan Ross if he was gay - a frequent speculation among fans as he played a homosexual character on Six Feet Under. He also played a transgender character in Broadway's Hedwig and the Angry Itch which further fuelled fan speculation.

He opened up about his sexuality for the first time in 2018, telling Daily Beast, "I think there’s a spectrum. I am on it. I’m heterosexual. But if there was a percentage, I would say I was not all the way heterosexual. I think playing the emcee required me to fling a bunch of doors wide open because that character I imagined as pansexual. Yeah, like I made out with Michael Stuhlbarg every night doing that show. I think I have always leaned into any fluidity in terms of my sexuality.”

But Hall said he'd never had an intimate relationship with a man and suggested that because of having an absent father he "craved for an emotional intimacy with a man."

A cancer diagnosis and a vegan lifestyle.

Aged 38, a year before the age his own father passed from cancer, Hall was diagnosed with Hodgkins Lymphoma in 2009.

Noticing that he had lymph nodes bulging out of neck, Hall told David Letterman that he'd been "joking around that they were alien eggs".

He received the cancer diagnosis with just a few episodes to go before a season finale of Dexter and decided to keep it quiet until the show went on break and he was able to get treatment.

He accepted his Golden Globe and Screen Actors Guild Award in February 2010 wearing a knitted cap over his head having lost his hair to chemotherapy. The cap was cruelly mocked as a red carpet faux pas, before his cancer diagnosis was made public, and the comments were quickly redacted. 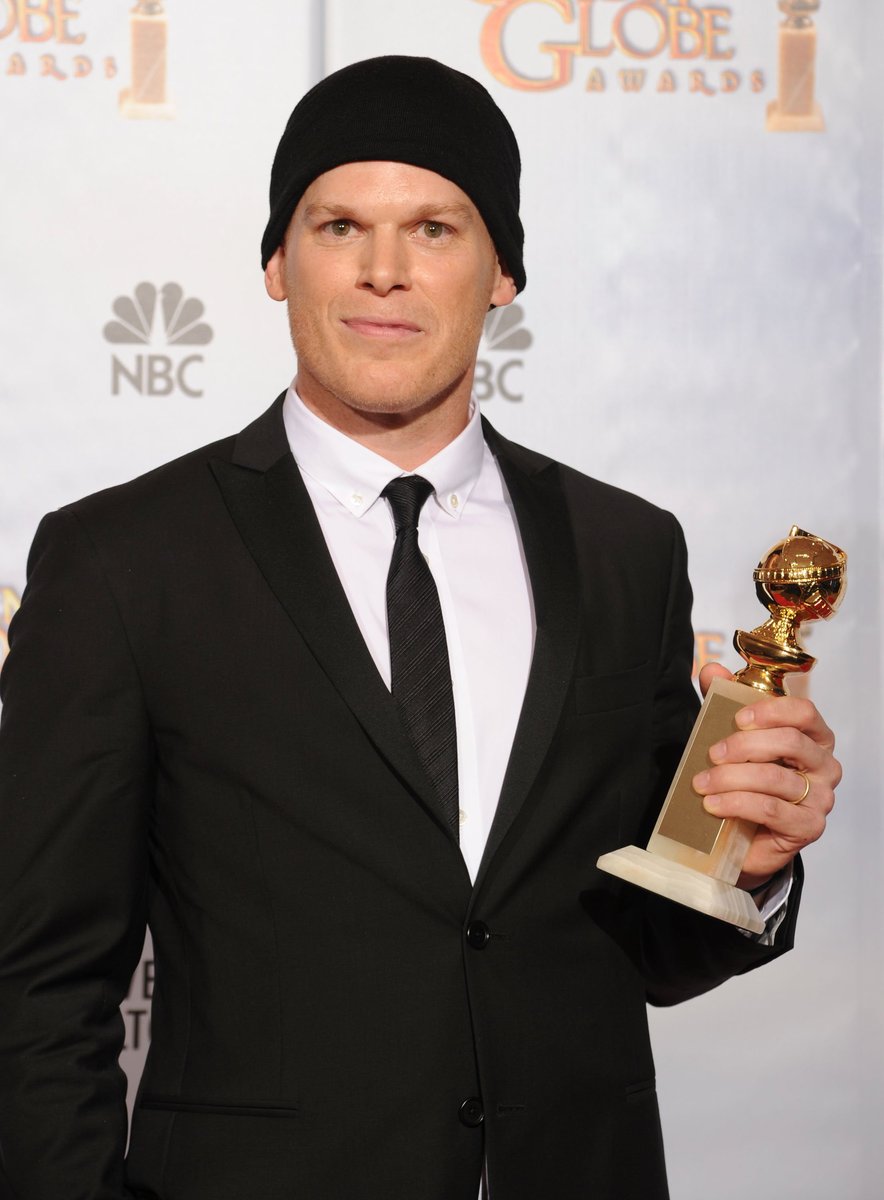 Actor Michael C. Hall, winner of the Best Performance by an Actor in a Television Series - Drama award for "Dexter" poses in the press room at the 67th Annual Golden Globe Awards. Image: Kevin Winter/Getty.

"I had every intention of keeping it quiet, but because the award shows were imminent, I figured I'd make a statement," Hall told EW.

As he further explained to Ellen in October 2010, "I caught it early, turns out I was very fortunate to have developed something that was very treatable and curable and I went through six months of treatment and I feel great. I am very thankful."

His mother is also a breast cancer survivor, and Hall said of contracting a disease leading up to his father's age of death was "serendipitous... kinda heavy, but just like huh, well that's interesting. I was just thankful that in my case it was curable."

Hall lives a vegan lifestyle, and in 2019 he appeared in a video for Extinction Rebellion talking about the threat of the climate emergency and his desire not to leave his "head in the sand."

"I support Extinction Rebellion because it invites me to move through my despair," he explained, encouraging people to take to the streets and "rebel for life."

The global environmental movement is an advocacy group that aims to create "civil disobedience" to compel government action.

Hall took part in a late 2019 protest on Wall Street against the fossil fuel industry, which saw demonstrators cover themselves in fake blood and 'die' on the ground to show the future effects heat stroke could have on us.