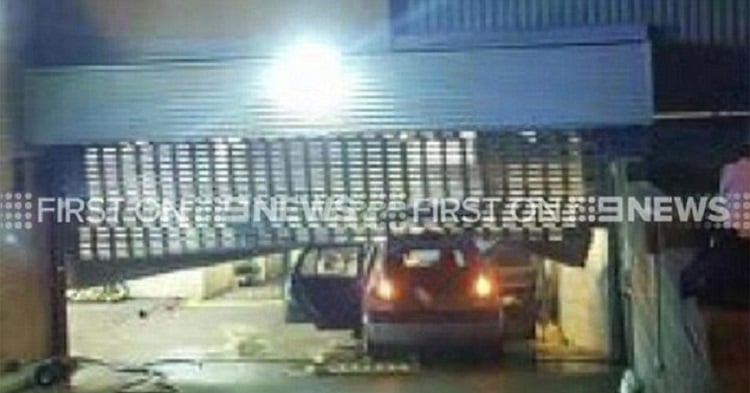 A man claiming to have a bomb has rammed the entrance to the underground car park of Merrylands police station.

The man who who is believed to have had a car filled with gas bottles suffered burns during the incident.

ABC News reported the man crashed into the car park door around 7pm and was arrested at 8pm.

Fairfax media reported the man is in his sixties and allegedly tried to set himself and his car on fire.

ABC News journalist Siobhan Fogarty has reported Police are now not treating the incident as a terror attack but the result of a mental health issue.

Police have now clarified the #Merrylands incident, initially treating it as terror but now believe it is a mental health issue. @abcnews

A police statement said the area had been cordoned off while the vehicle was examined by a bomb unit.

“The perimeter remains in place as a precaution while officers from the Rescue and Bomb Disposal Unit attend and examine the vehicle,” a police statement said.

“No members of the public or police officers were injured during the operation.

“The circumstances regarding the incident are in the early stages of being confirmed and no further details are available at this time.”

It is understood the man remains in custody but has been transferred to a burns unit for treatment.

#BREAKING: A police source says a man is in custody following an alleged attack against the Merrylands Police Station. @abcnewsSydney

The double standards annoy me to no end. If a Muslim tried to do this, there would be protests for a week to ban Muslim immigration but because it's a white male, there is no such protest. I want white men stopped from entering this country because they're the ones committing these crimes. (Sounds ridiculous? That's why people get so worked up at Sonia's/Bolt's comments, because they're ridiculous).

Mental health is a real and serious issue, people do awful things they wouldnt even dream of doing while well and they actually cant control it.
People with Severe mental illness need support, therapy and appropriate metication not judgement.