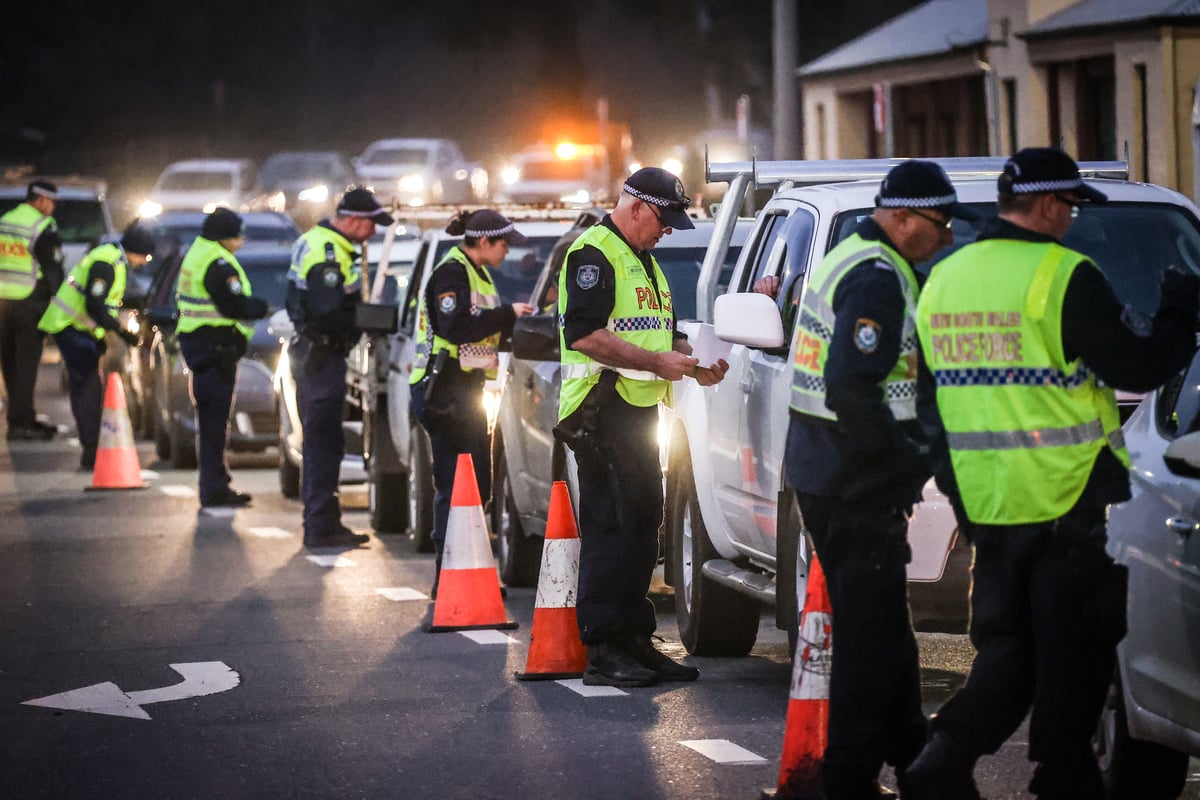 As Melbourne sits on the cusp of a coronavirus second wave, the panic pandemonium has once again returned.

For six weeks, five million residents of Melbourne and Mitchell Shire, north of the city, will only be able to leave their homes for four essential reasons.

The news comes as the city has recorded unprecedented levels of community transmission in Australia.

And so, the last 24 hours have seen residents frantically prepare for the next 42 days of lockdown.

From midnight Tuesday, borders between NSW and Victoria closed. In light of the lockdown news, queues at the borders were up to four kilometres long as NSW police had to turn back people travelling from Melbourne's coronavirus hotspot suburbs.

More than 600 officers were deployed to police the border, and up to 500 defence personnel are also being deployed to help guard checkpoints at 55 border crossings.

On Wednesday morning, motorists reported delays were still up to one hour to cross the border. 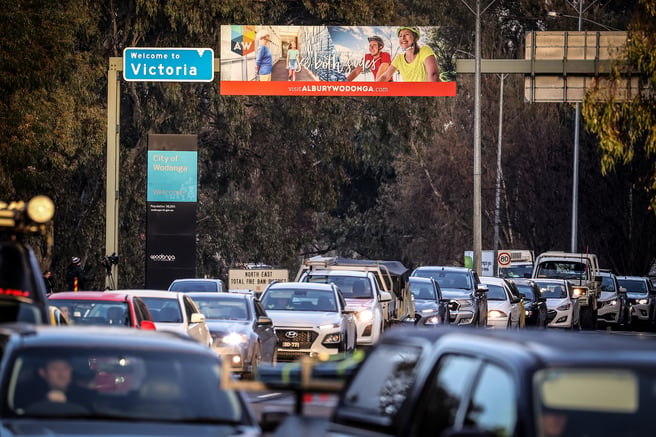 Cars sit in a line underneath a sign regarding the Victorian border near a police checkpoint on July 8, 2020 in Albury, Australia.Image: Getty.

BORDER SHUTS: a long queue has already formed with people trying to get into NSW via Albury. Many are frustrated locals wanting to get to work. All cars are being diverted through here off the Hume. Expect huge delays #7newsmelb @sunriseon7 #alburywodonga pic.twitter.com/d6tdDrFeTH

Queues at supermarkets and panic buying have also returned, with shelves across the city stripped bare in the past 24 hours.

As officials have continued to emphasise, shopping for groceries is one of the four essential reasons residents are permitted to leave home during lockdown, meaning stock-piling is unnecessary,

On Wednesday, Woolworths and Coles both reinstated measures to prevent people from stockpiling food.

The two major supermarkets reintroduced a purchase limit of two items per customer across a number of product categories, including frozen vegetables, both in-store and online.

Came to pick up a few things from Woolies - massive q to get in! pic.twitter.com/zf2V7lZock

Lock down is back and so is the panic buying and the long lines to enter the super market in bayside Melbourne pic.twitter.com/NKFu2IrLmt

Late on Tuesday night, before the border closures, several passengers arrived in Sydney on the last flight out of Melbourne.

All those arriving at the airport from Victoria were greeted by police officers and health officials.

Those returning from Melbourne will be required to self-isolate for 14 days as part of a last-minute rule ahead of Melbourne's lockdown. 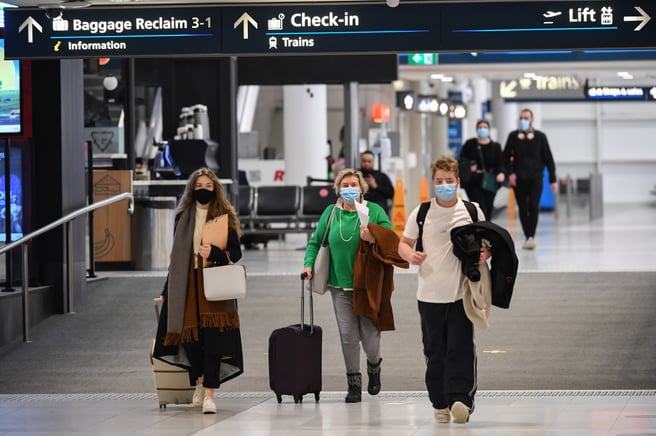 Passengers arrive in the baggage reclaim hall at Sydney Airport on one of the last flights out of Melbourne to Sydney on July 07, 2020. Image: Getty. 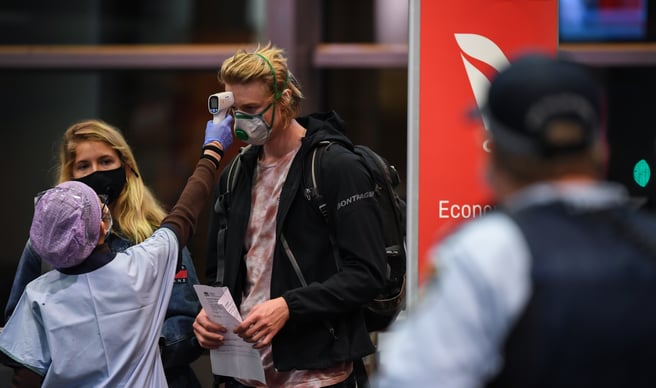 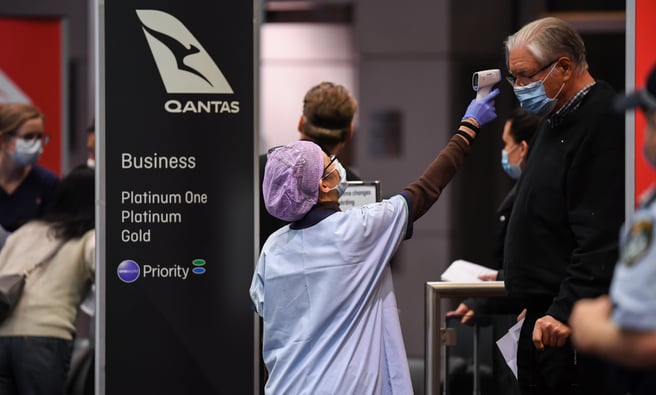 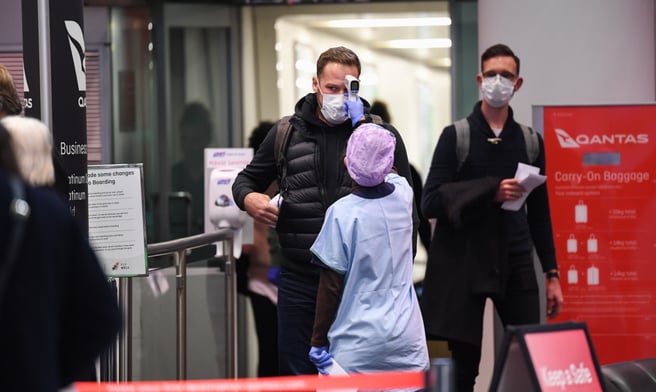 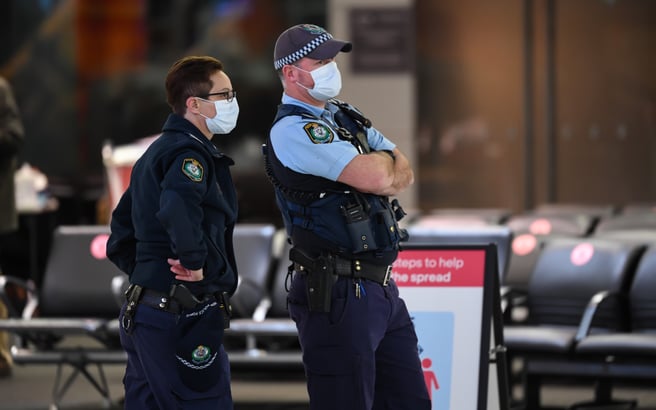 Police officers wear face masks as they watch passengers arrive from a Qantas flight at Sydney Airport on one of the last flights out of Melbourne to Sydney on July 07, 2020. Image: Getty.

An update on COVID-19 cases

Victoria recorded 134 new coronavirus cases in the past 24 hours, Premier Dan Andrews announced on Wednesday morning. It follows an increase of 191 new cases on Tuesday - their highest single-day increase since the pandemic began.

Almost 30,000 people were tested for coronavirus in Victoria on Tuesday, bringing the total number of tests conducted in Victoria to one million since January.

Police now have the power to issue on-the-spot fines of up to $1652 to individuals breaching the chief health officer's directives.

"We've done this before in restrictions we've been through. People know what to do. They know what to expect."