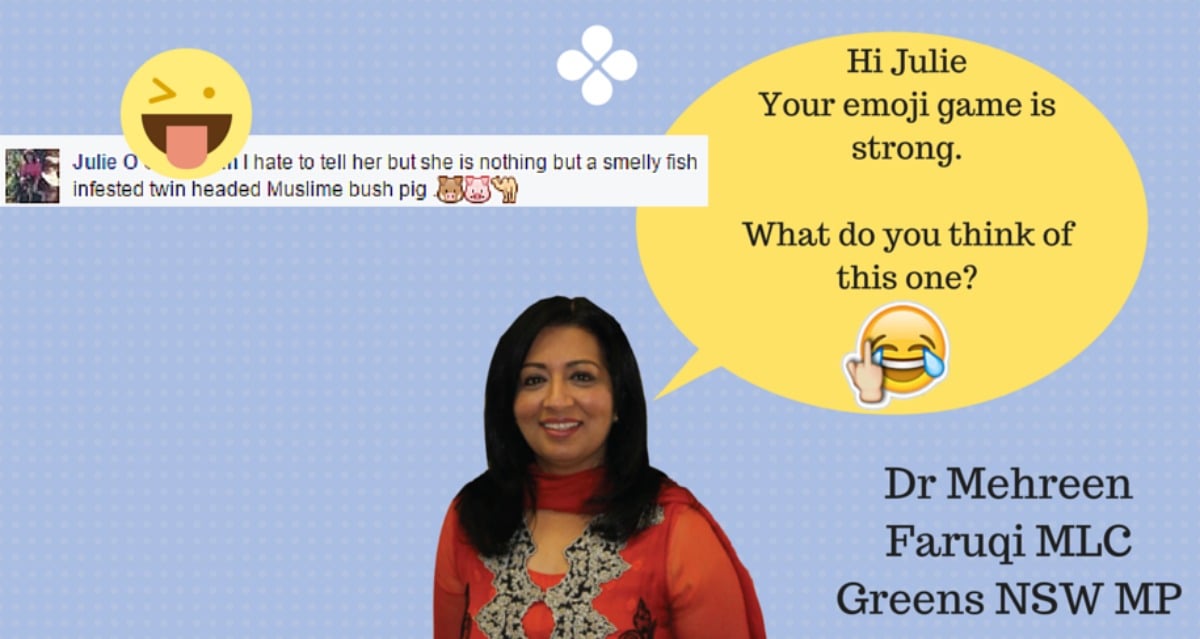 There’s few things more cringe-worthy than a politician trying to prove they’re down with the kids by filling our Facebook feeds with bad memes and jumbled internet speak.

That said – and seemingly against all odds – there’s one Aussie MP whose do-it-yourself memes manage to be both completely spot on and a scathing rebuke of racist, sexist online trolls.

NSW Greens MP Mehreen Faruqi has been crushing her critics and capturing our hearts with her unique approach to disarming the haters.

Adding “just a touch of sass”, Faruqi has been publishing a curated collection of some of the “filth” being flung her way on a daily basis.

The result is ‘Love Letters to Mehreen’, in which she spell-checks her Islamaphobic trolls and deploys emojis with Julie Bishop-level finesse to transform toxicity into hilarity.

“I think it’s good to take back some control as well as expose it for what it is. I know so many other people – especially a lot of Muslim women – who are in the public eye who receive similar messages, so we can’t really ignore it,” she told New Matilda.

Pakistan-born Mehreen has been a member of the NSW state parliament for three years now.

She’s an outspoken advocate for multiculturalism and greyhound welfare, is pushing for a harm-minimisation approach to drugs and yesterday introduced a historic bill to decriminalise abortion in NSW, after more than 100 years.

Oh my god the sass, i love it.