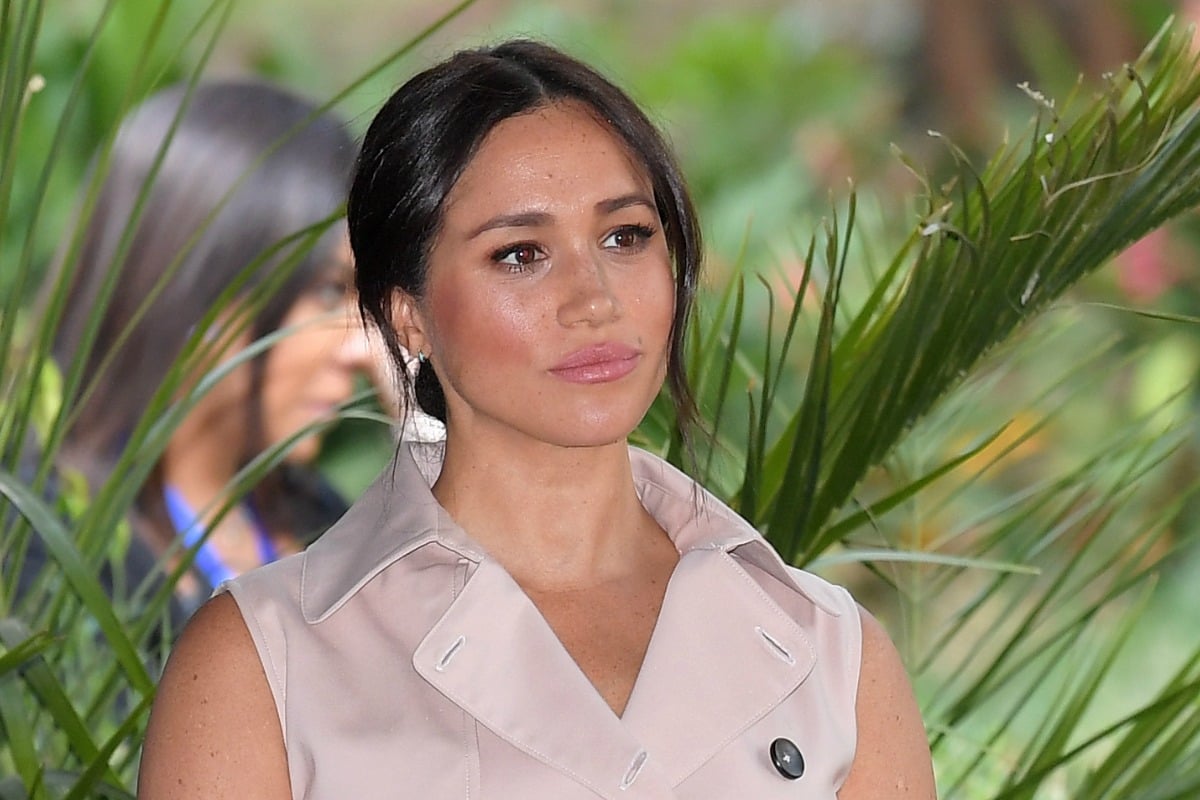 There are some things you’re not allowed to complain about and having a healthy baby is one of them.

Also on that list is being a rich and beautiful Duchess, who’s married to a handsome prince and lives in beautiful home, attended by servants.

So the sight of Meghan Markle, the Duchess of Sussex, trying not to cry as she expresses just how difficult she’s finding new motherhood in the crystal fishbowl of royal life should be the least relatable thing ever.

Meghan talks about her struggles in Meghan and Harry: An African Journey. Post continues below video.

But somehow, it isn’t. The video of Meghan’s interview with Tom Bradby on the ITV-produced Meghan and Harry: An African Journey is being passed around from woman to woman with comments like, “I just want to hug her,” and  “Thank you for saying it, Meghan” and “This. This. This.”

If you haven’t watched An African Journey yet, let me provide you with a cheat-sheet: The royal couple go on an official tour of southern Africa, followed by about a million camera crews, one of which is granted special access.

They direct the beam of their collective star power onto worthy causes from domestic violence charities to land-mine clearance, deliver impressive speeches, meet legendary leaders and grass-roots organisers. And they both give blisteringly honest pieces to camera about the stress of being the most-followed, most-obsessed-over couple in the world, the focus of rabid tabloid fantasy.

Harry spoke honestly about the side of his “job” that he loathes – having to make nice with the press, who, he pulls no punches in saying, he blames for leaving him motherless 22 years ago. He describes the grief of that loss as “a wound that festers”. And he also admits that managing his mental health is an ongoing reality. “Being part of this family… it’s the worst reminder of her life as opposed to the best”.

Meghan, in her interview, tells Bradby that nothing could have prepared her for the pressure applied to her by the UK's famously vicious tabloid media, who she is currently suing.

"I had no idea... when I met my now-husband, my friends were so happy because I was so happy," she tells him. "But my British friends said, 'I'm sure he's great but don't do it, because the British tabloids will destroy your life'."

And she holds back tears as the reporter asks her how she is. "It's hard... Any woman [knows] when you're pregnant you're vulnerable, and then with a newborn, as a woman... it's a lot. So you add all this on top of being a new mum... It's a very real thing to be going through behind the scenes."

And then, she says to Bradby, who's getting paid to ask her questions, "Thank you for asking. Because not many people have asked if I'm okay."

The soft sound you can hear is the fist-pumping realisation from thousands of new mothers that no, no one is asking them if they are okay either.

Those new mums' problems may seem less dramatic than having humiliating family matters exposed in tacky headlines, or bare-faced lies presented as truth to anyone with a phone in their hand.

But their struggles are no smaller. Not really. Maybe those new mums are grappling with the seismic shift in identity that comes when everything about your life changes in moments. What you did before, whatever it was, is gone, and what you do now is mother. And it's difficult, and confusing, and although there are hundreds of rule-books, there is no rule book.

They're tired, both physically (never been more bone-crushingly tired, physically) but also mentally, because there's never been such a strange and discombobulating battle between extreme stress and extreme boredom bashing it out in their head.

Those new mums might be struggling on one income, or no income. They might be looking at their relationship and wondering why nothing looks familiar. Looking at their body and thinking the same.

Those women might be feeling an overwhelming dread as each night approaches, knowing it holds no rest for them. Or they're trying to push down the constant rising anxiety that comes with the knowledge of how high the stakes are if you stuff this strange new job up.

Those women are in physical pain, after their body has endured the trauma of birth, but their hearts are full, because they're falling in love at the same time. Or they're not, because that magical instant love is late to arrive. Sometimes, nothing they do seems enough for this tiny, squalling stranger.

And they just want to cry all the time.  No. The new mums are not okay.

And yet, no one asks.

"Is the baby sleeping?" people ask. "Are you breast-feeding?" "How much do they weigh?" "Are you back at the gym yet?" "When are you going back to work?"

It is impossible to answer any of those questions correctly.

And so, here we are. In the weird situation where one of the most privileged people on the planet has given voice to the unspoken truth of millions.

Meghan and Harry, the ambitious royals, are trying to do a lot. They are products of their generation's, not content to sit back and say "Oh well, that's the way it is." They want to feed the unfed, plant trees for climate change, eradicate sexual violence, crush racism, give voice to the voiceless, end poaching, heal divided communities and comfort the suffering.

But maybe one of the changes that will stick is a quieter one. Just a question that ordinary humans ask each other.

Maybe more people will remember to ask new mothers about themselves. Maybe they'll ask, "Are you okay?"

And then listen to the answer.

What do you wish someone had said to you when you were a new parent?

The difference is that she is struggling and no okay with nannies, personal assistants, hair and make up assistants. But normal people struggle with taking care of their child themselves and trying to live their own life.

Absolutely, you are right. Poor diddems, she needs to put away the pity party. It’s a joke.