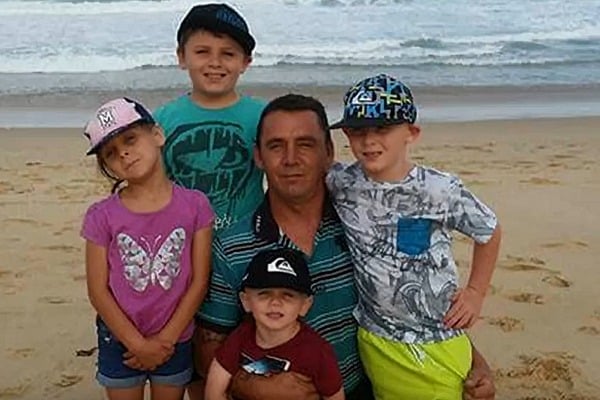 Mark Keans, 39, is lying in a hospital bed in Brisbane.

The father-of-four, who has inoperable cancer in his brain and lungs, has been told he is unlikely to survive past Christmas.

But due to COVID-19 border closures, Keans' four children, who are currently in Sydney, have been unable to cross the border to see their dad.

"They told us we were being selfish – and we weren't taking into consideration the other patients," Langborne told 7News on Wednesday.

The Keans family have been told that only one of the man's four children, who are all aged under 13, can cross the border to visit him in hospital.

"I have no idea how you pick and choose which child goes," Mr Langborne told 7News.

Speaking to The Today Show on Thursday morning, Langborne admitted that it has been a "hard" fight to get across the border.

"Well, basically, what [we were told by Queensland Health is], one, we had too many people trying to come up," he told The Today Show.

"Two, we weren't allowed to drive, we had to fly in and then we probably wouldn't get out of the airport anyway, they'd send us back," he continued.

"Three, by us wanting to come and see Mark, we're being selfish and not taking any thought as to the welfare of the other cancer patients.

"We could not pick one [child] over any of the others. It's impossible. Every one of them deserves it.

"To me, I think it's ridiculous. The worst one, more so, are the AFL ones, are the ones on the boat [Lady Pamela]. You've got some multimillionaire gets charged $1,000 to spend time in Queensland so he can do as he wants.

"Hopefully, between us and the publicity we've been getting and our local members, we can get something resolved so we can get to see him."

Langborne added that Keans was "upset he can't see anyone".

"It’s hard. We’re locked out in his time of need and that’s hard because you want to be there and you can’t. It’s gut-wrenching," he said.

"He’s even talking about he may have to come back to NSW just to see us," he added.

"It is especially hard for Mark today because his two middle kids, the twins, are 11 today. That makes it hard for him."

Listen to The Quicky, Mamamia's daily news podcast, below. Post continues after podcast.

With the decision to send one child across the border proving too difficult, the family have decided to keep the four children in NSW for the time being.

In response, host Karl Stefanovic made a plea in response to the strict border closures.

"When you have a family choosing which child should say goodbye to their father, their dad, it’s gone too far," Stefanovic said.

"Grant the exemption, the Premier is not heartless, but she needs to streamline this system while protecting Queenslanders. There is a medium. Let these kids say goodbye and let a dying man say goodbye."

"I can only express my supreme anger at the Queensland Premier's decision, which, in my view, is nothing more than base loopy politics," he said.

The Keans family are not the only family struggling with the tough border restrictions.

In letter to QLD Premier, Sarah Caisip pleas to be allowed out of quarantine to attend Dad's funeral today: “The fact that I'm being denied my basic human rights to care for my grief-stricken mother & little 11-year-old sister enrages, disgusts & devastates me at the same time.”

Canberra woman Sarah Caisip, who is currently in hotel quarantine in Brisbane, applied for an exemption to enter Queensland when it became apparent that her father didn't have long to live.

Once the exemption was finally granted, however, her father had already passed away.

Now, the 26-year-old is pleading with the government to attend her father's funeral on Thursday afternoon.

"My dad is dead, and you made me fight to see him, but it was too late, and now you won't let me go to his funeral or see my devastated 11-year-old sister," Caisip wrote in a letter to Queensland Premier Annastacia Palaszczuk.

"I came from virus-free Canberra, so the fact that I'm even in quarantine is beyond belief but the fact that I am being denied my basic human rights to care for my grief-stricken mother and little 11-year-old sister enrages, disgusts and devastates me at the same time."

Speaking to 4BC Radio on Thursday morning, Prime Minister Scott Morrison confirmed that he had appealed to the Queensland Premier to "overrule the decision".

"It’s not about borders. It’s not about politicians. It’s not about elections. The only thing that matters today is that Sarah can be with her 11-year-old sister Isobel and her mother while they mourn the passing of their father and husband Bernard at Mount Gravatt today," he said.

"This is a heartbreaking case. This is the last opportunity to say farewell to her dad.

"Surely in the midst of all of this heartache in COVID and everything that everyone's going through, surely just this once, this can be done."

Premier Annastacia Palaszczuk accuses PM Scott Morrison of calling her this morning to bully her over a border exemption issue, and lying over whether he would make it public. Palaszczuk told him, and parliament now, it was a matter for the Chief Health Officer alone.

But in parliament, the Queensland Premier responded to the Prime Minister, accusing Morrison of "bullying" her.

"I will not be bullied nor will I be intimidated by the Prime Minister of this country who contacted me this morning and who I made [it] very clear to, the fact that it is not my decision," Palaszczuk said.

"It is the Chief Health Officer's decision to make."

Reply
Upvote
There are plenty of Australians who have been denied exemptions to go overseas to see dying relatives, or have been unable to get back into the country to see them. ScoMo is throwing a lot of rocks around for a man living in a giant glass house.
G
guest2 a year ago

Reply
Upvote
1 upvotes
So some uber wealthy Melburnians can sail into Qld on their yacht and quarantine for two weeks, but a terminally ill father can't see his children before he dies?  Whoever made this decision should be absolutely ashamed of themselves, which seems to be same person (the premier) who declared 'Queensland hospitals are for Queenslanders only'.  I hope she remembers that the next time a disaster (such as the floods) happens in her state, but expects the rest of Australia to help pick up the tab.
News
General
Opinion
True Crime
Politics
Sport
Explainer
Entertainment
Celebrity
Reality TV
Movies
TV
Books
Rogue
Royal
Lifestyle
Beauty
Fashion
Weddings
Home
Wellness
Health
Fitness
Travel
Food
Parents
Before The Bump
Pregnancy
Baby
Kids
Teens
School
Parent Opinion
Work & Money
Money
Finance
Career
Lady Startup
Relationships
Sex
Dating
Separation
Friendship
Family
Real Life
Couples