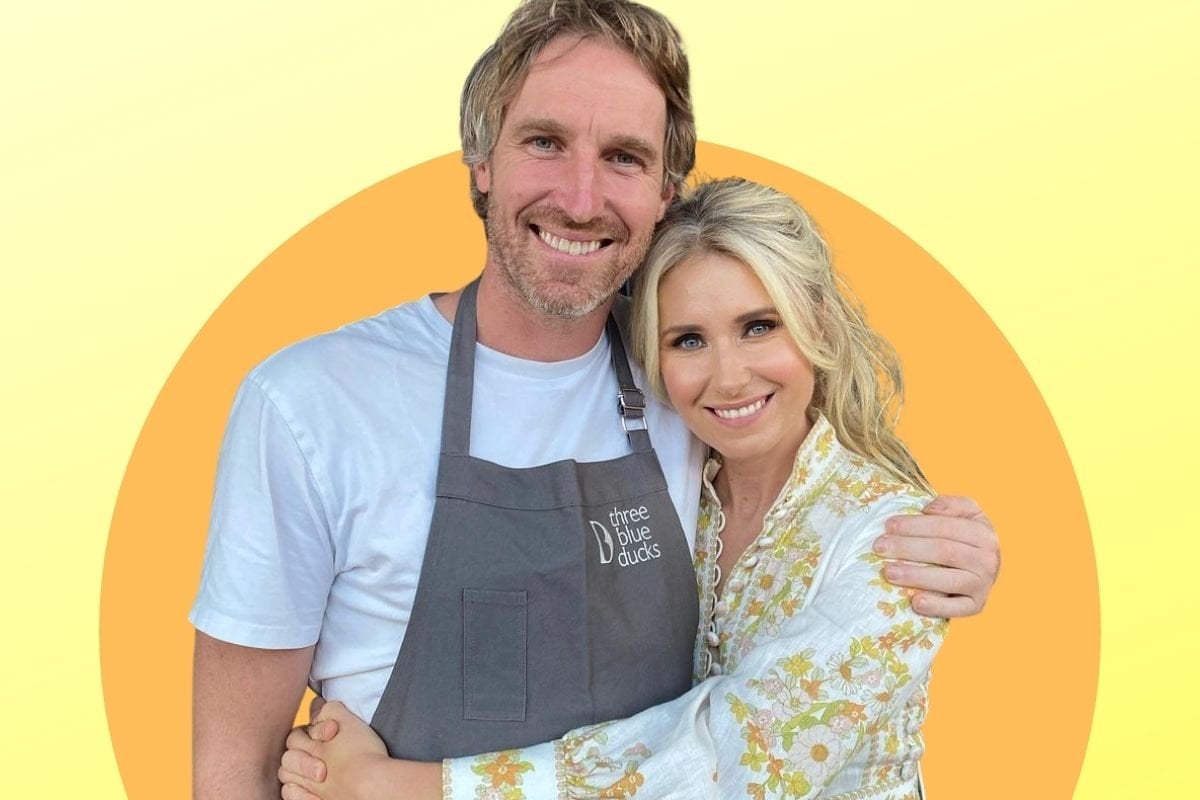 Tucked away in the regional town of Byron Bay, former Sydneysider Magdalena Roze is thankful to be riding out the pandemic from a patch of NSW that's so far avoided the worst of the virus.

They've needed the tranquillity and calm of the popular coastal haven to enjoy at the end of the day. Because from a business sense Roze and her chef fiancé Darren Robertson have been in the thick of it, juggling eight restaurants spread out across three states in one of the most COVID-affected industries in Australia — hospitality.

If you haven't been keeping tabs on their growing foodie empire, Robertson co-owns six Three Blue Ducks in NSW, QLD and Victoria, Rocker in Bondi Beach and Oma in Byron Bay.

Last week seven of the eight were in lockdown, but now that Byron has emerged from five weeks of stay-at-home orders another two can reopen their doors.

As Roze tells Mamamia, they've learnt to roll with the punches 18 months into a pandemic.

"When it first hit, that hit us hard because it sort of came out of nowhere, and there was so much uncertainty. It's the uncertainty that makes it scary because it took a few weeks for the government support to come in... before that we were like 'how on earth are we going to continue to pay our staff and rent?'

"Those days felt like a year, and every night we'd put the kids to bed and sit on the couch just having hours and hours of chats, strategising about how we were going to pivot."

Roze says they had to face the reality that they may lose everything: Ten years worth of work.

"That was really confronting," she told Mamamia. "Ultimately we had to sort of go 'okay that's possible, and if that happens so be it, we'll just have to start again.' The most important thing is our health and our family."

The 39-year-old says they went through a kind of grieving process, which was actually really freeing in the long run.

"Because after you come to terms with losing it all, it's a relief almost. And it's just helped us deal with the rest of it. Nothing has been as challenging mentally as those first few weeks, and we sort of just focus on what we can control."

Since the birth of their kids, Robertson has had the career centre-stage as Roze stays at home with their sons Archie, five, and Charlie, three.

As the TV presenter, meteorologist, cookbook author and entrepreneur explains: "One of us has to be the anchor. If we're both going at full speed, something's got to give and the most important thing to us is family. So because everything was happening with the restaurants, and because the children were so little, we made the decision that I would be the primary carer and I was happy to sort of let some of my work opportunities take a bit of a backseat."

When the pair first got together eight-ish years ago, there was just one restaurant, Three Blue Ducks in Bronte. It's been an upward sprint since then. They moved from Sydney to Byron almost seven years ago to oversee the creation of Byron Bay's The Farm — part of the Ducks' empire.

"The opportunity for growth has come and we've just sort of taken it. I'm always sort of like 'another one??' But Daz loves it, he can't help himself. It's not just his livelihood, it's his life — it's our life."

Financial woes aside, the greatest burden the couple has felt is the weight of responsibility for other people, says Roze.

"Other people's livelihoods. That's the stuff that keeps you up at night and weighs on your heart, and it all sort of ripples down. You've got an egg producer who's used to supplying you 2000 eggs and your restaurant shuts down... who is he going to sell them to?"

Roze has grown accustomed to finding 20 boxes of eggs in her house or 40kg worth of bananas on her doorstep because Robertson hates to leave his suppliers without their paycheck.

Amidst the chaos, however, there's been plenty of light. They've taken advantage of the extra family time; bike riding, DIY pizza nights out in the garden and cocooning their kids away from the constant stream of COVID news.

"We've made a real effort to try and shield them from it as much as possible. We never have the radio or the TV on because with my five-year-old, nothing goes over his head.

"But they are still affected. [Archie] was building Lego the other day and he built a pub and put a Lego COVID marshal out the front."

Roze has been finding comfort in her morning cup of Nerada tea. It's a routine she's always had, but during COVID it's been even more integral to her routine.

"The other day I woke up at 4am feeling so anxious. I haven't felt like that since the start [of the pandemic] but for some reason lately, it's been creeping back. I tapped Daz and I was like 'I'm so stressed and I don't know why!'

"I tried to just lie there and cuddle the kids [who were in our bed by this point], but I couldn't switch off my thoughts. So we got up in the dark, went to the kitchen and made a cup of tea. We just sat there in the quiet talking as the sun came up and it just made everything better. It's just those simple things like sitting down with a cup of tea, talking to someone, or writing down my thoughts in a journal that really have a massive impact on my mental health."

Now that locked down NSW at least has a solid reopening plan, Roze is very much looking towards Australia's future. Personally she's hopeful it will include a trip to Sydney to see family for Archie's 6th birthday in December. But she's also dreaming of a thriving summer for the country's hospitality industry as a whole.

"I hope there's this sense of hopefulness after all of this," she told Mamamia.

"Because it's a lot, and it's collective. It wasn't just a few people here and there, Australia did this together. I kind of dream of that atmosphere during the summer of the Sydney 2000 Olympics, when everyone was so happy and united and just in a really good mood."