John Aiken. Mel. Even Trish who contributes very little but whose commitment to the process is unwavering.

But our experts trust in a process that has proven itself to be not only deeply flawed but significantly detrimental to the wellbeing of all participants.

And we can only respect that.

We open on a woman in the back of a dark car crying to herself, "what's wrong with me?" and we don't know sweetie but we're certain Channel Nine does and that they're planning on exploiting it for entertainment purposes.

While the crying woman makes her way to a (fake) hens night, a (fake) bucks night begins on the other side of Sydney.

It's here that we meet... a familiar-looking man.

It's clearly got to the point where the experts now have to recruit members of their own family to fill spots in their experiment. But for now, Steve acts like he's just a 'regular' guy, and isn't still married to John's mother. Helen.

Everyone acts like things are normal until we meet Ivan who describes himself as "obnoxious" (maybe don't... lead with that) and can't stop playing with the car windows.

Over at the (fake) hens night, Poppy has arrived and she's ready to tell the producers why she's here.

You can catch up on all our recaps so far right here...

The Twins recap Married at First Sight episode three: When your mother-in-law... hates you.

You see, her ex-husband had a terrible accident. He tripped and fell and landed in his co-worker's vagina and he's still stuck there and you better believe no one enjoys that joke more than Poppy does.

Then there's Connie, and producers attempt to draw a tenuous link between Connie wanting to be a marine biologist and her being single for five years which we all blindly accept. "I do trust the science behind the experiment," she says, which is concerning given there is none.

HUSH NOW IT'S TIME FOR MATCHING.

The experts keep saying they had more than 15,000 applicants this year and, it's like, okay if you had so many applicants then how come John had to get his dad on the show.

The experts have their first two couples after precisely no deliberation.

Josh decides to tell his grandma first and she gets a real kick out of it. And if there's one thing we know about grandmothers (generally) it's that she most definitely watches the show.

In a piece to camera, while preparing for his wedding, Josh laments the state of modern-day dating, reflecting that people are so quick to "bail at the drop of a sandwich" and that is just so... not the expression you were looking for.

But there's no time for correct expressions. Josh has a fake wedding to attend.

When he first lays eyes on Cathy, he yells 'Not bad, hey Mum!' and yes darling your fake reality TV wife is just fine.

Cathy's friends are excited because she allegedly had a dream her husband's name was Josh which feels like a lie but we'll allow it.

They're both pleased with their match, likely because they're both conventionally attractive. Josh keeps saying things like "Holy DEMON" which you'd think would be a deal-breaker but apparently not.

By the end of the reception Cathy is sold on her husband, confiding in the camera, "Josh could honestly be the one". It makes us sad because that's about as likely as, we don't know, expert Trish pulling her weight. That is to say, impossible.

Over at Poppy and Luke's wedding, Poppy is starting to realise that she's a) getting fake married to a stranger, and b) has abandoned her young children to do so.

While someone on the production team is convincing enough to get her to the actual ceremony, halfway through her groom's vows, it dawns on Poppy that this is literally the dumbest thing she has ever done. She's entirely unresponsive for the rest of the wedding which seems rude given that she's the actual bride, and everyone came because she insisted on being on reality television.

After the ceremony, Luke and Poppy go to get their (fake) wedding photos taken, and she tells him about her twins, affectionately named Cock and Block.

Poppy misses them so much that she breaks down in tears and Luke assures her that everything is going to be okay. She replies through gritted teeth "It's not" because she has a two-year-old named Cock, did you not hear that? Do you have any idea what naming a baby Cock does to a child?

At the reception, Poppy can't be within one metre of Luke without crying which is less than ideal. Instead, Luke is left to hang out with his groomsmen who are very reassuring about his current situation. 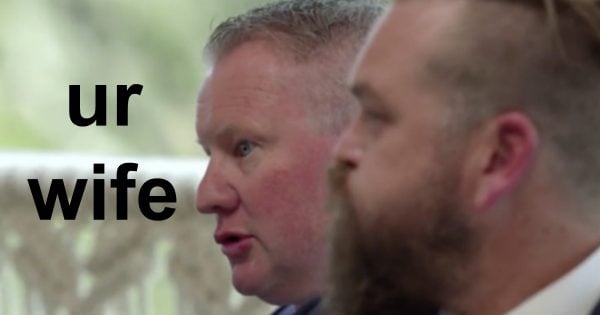 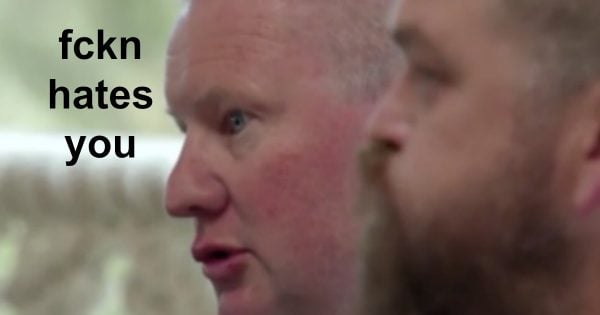 Poppy's friends take her aside and suggest that maybe she go to the trouble of changing her personality because she's being cold as shit and eventually Poppy agrees.

She decides to apologise to Luke and also to consume 45 standard drinks in order to disconnect emotionally which appears to work.

They bond over their mutual interest in alcohol until it's time to leave.

The pair get very excited about going to the Bottle O on the way home and that's their shared hobby which we obviously respect.

They climb into bed and Luke whispers something sexy about his "cock" and Poppy starts crying again because it reminds her of how much she misses her two-year-old son which is just not a problem Luke expected to encounter.