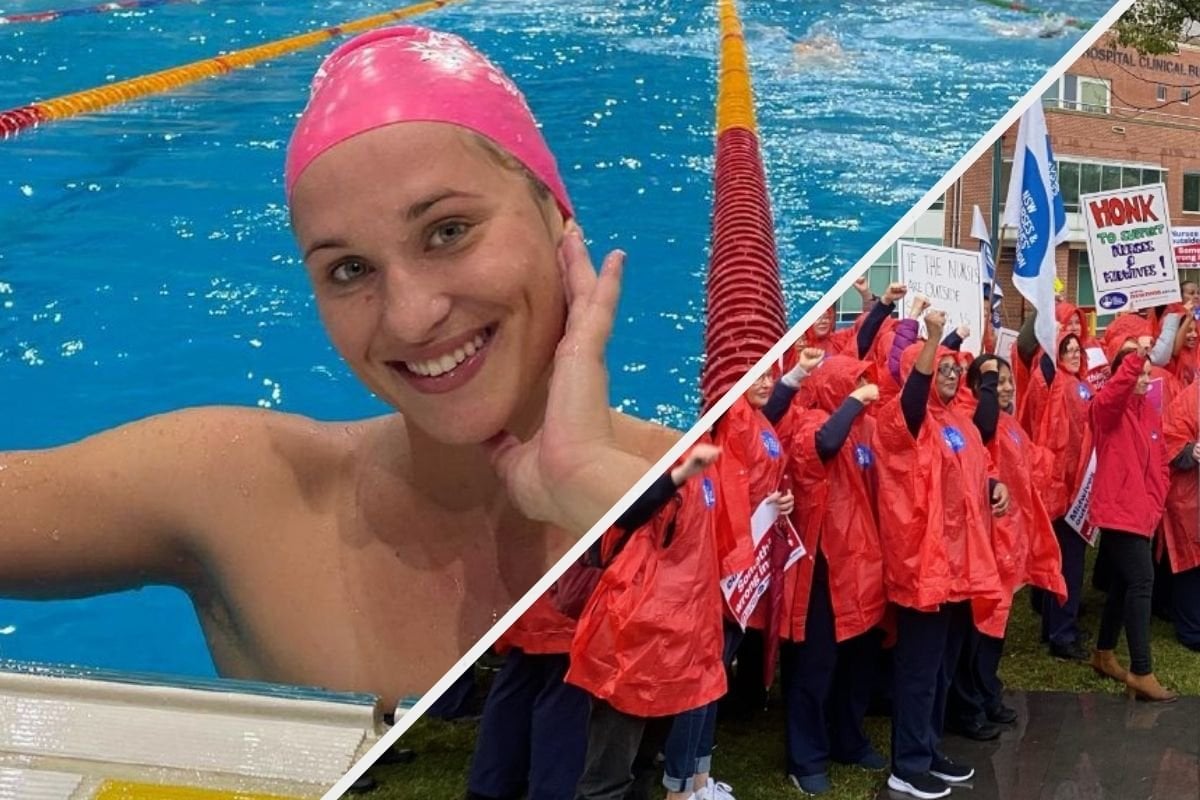 Australian swimmer Maddie Groves has withdrawn from the Olympic trials while taking a swipe at "misogynistic perverts in the sport".

The target of Groves' comments in social media posts was not immediately clear.

Groves, a dual silver medallist at the 2016 Rio Olympics, won't compete at the trials for the looming Tokyo Games starting Saturday in Adelaide.

"Let this be a lesson to all misogynistic perverts in sport and their boot lickers," she wrote.

"You can no longer exploit young women and girls, body shame or medically gaslight them and then expect them to represent you so you can earn your annual bonus.

The 26-year-old who has endometriosis and adenomyosis reposted her Tweet to Instagram, adding: "Putting this on the feed for emphasis. Make them pervs quake in fear from the number of people supporting a statement that threatens their existence."

Last November, Groves detailed on Twitter that she had complained about a "person that works at swimming making me feel uncomfortable the way they stare at me in my togs".

Groves alleged the perpetrator had been promoted.

She followed up her tweet on December 1 saying; "Woah guys this may have worked. Next time you have a weirdo stare at your tits and your complaints fall on deaf ears, try tweeting about it.

"I didn't even say where they worked so good on that workplace for immediately knowing it's their shitness. Did they recognise my complaint because they already had it on file".

Scott Morrison has got off to a flying start on a three-nation tour by reaching a deal with Singapore to work on the conditions for a travel bubble.

Mr Morrison made a brief visit to Singapore on Thursday for talks with his counterpart Lee Hsien Loong.

It was the first stop on his way to Cornwall for the G7 leaders' summit, as well as trade and security talks in London and Paris.

Singapore and Australia PMs agree to work towards an air travel bubble https://t.co/IQgymQmUNc

Over the past week Singapore has recorded an average of just four local COVID-19 cases a day, with its vaccine rollout well under way, restrictions easing and rapid test kits about to go on sale to the public in pharmacies.

Mr Morrison said systems will be put in place to enable the two countries to open up in a similar way to the Australia-New Zealand bubble "when we are both in a position to do so".

"There is nothing impeding us - as we discussed today - from getting on with the job of putting systems in place that will enable such a bubble to emerge between Singapore and Australia," he said.

Students would get priority when the bubble was established.

The two leaders signed a memorandum of understanding on health care and health technology and agreed to start talks on a "fintech bridge" which would make it easier to cooperate on financial technology.

The murder of a woman who was shot dead after answering her front door in the NSW Hunter was almost certainly targeted, police say.

Stacey Klimovitch, 61, was shot in the chest at a home on Queen Street in Stockton, outside Newcastle, after 8pm on Wednesday. Her 31-year-old daughter and eight-week-old granddaughter were inside the home at the time.

The woman died at the scene and police are investigating the incident. The killer is believed to have fled the scene by foot.

Detective Superintendent Wayne Humphrey admitted police currently have no major leads on the case and appealed to the public for information on the killing.

"I'm convinced it is a targeted attack, for what purpose I don't know," he said.

"It's horrendous, an innocent person who's answered the front door of her home and been shot in the chest and killed in the presence of a relative and child ... it doesn't get any worse, I really want the public to step up.

"I don't anticipate anything will happen very quickly, it'll be hard work."

Victoria's latest COVID-19 challenge is far from over, despite the end of the Melbourne lockdown and the further easing of regional restrictions.

As the relaxed rules came into effect at midnight on Thursday, health authorities were trying to work out how four members of a Melbourne family with no known links to current outbreaks tested positive for the virus.

Also on Thursday, wastewater detections of the virus were reported in the suburban Pascoe Vale, Scoresby and Vermont areas.

Six more public exposure sites were added for Bundoora, Heidelberg and Thomastown in Melbourne, dating from May 28 to June 7.

While the easing of restrictions went ahead as planned, Melburnians must continue to wear masks indoors and outdoors.

Thursday's four new cases are from the same Reservoir household in Melbourne's north.

There are 78 active cases across the state, down five from Wednesday.

Authorities are anxiously awaiting coronavirus tests that will show if a Victorian couple who went on an interstate road trip infected anyone in Queensland.

Queensland Health has identified 17 close contacts of the couple, but so far only has results for three of them.

They've been negative, including the infected woman's parents, with whom the couple stayed at Caloundra on the Sunshine Coast.

2 cases were locally acquired with recent travel from Victoria. 6 cases were acquired overseas.

In total about 400 people have been forced into isolation and are getting tested as a result of the couple's arrival on Saturday after a road trip from Melton in Melbourne, through NSW and into Queensland.

They are known to have visited sites in Goondiwindi, Toowoomba and the southern Sunshine Coast.

A temporary, walk-in vaccination hub at the Caloundra Indoor Stadium will open its doors this weekend in response to the threat. It'll be open seven days a week until June 23.

The couple's trip has also sparked health alerts in NSW, where they visited at least 10 sites in the NSW towns of Narrandera, Forbes, Dubbo and Moree.

One dead as Vic reels from wild weather.

Wild Victorian weather has claimed one life and put two volunteers in hospital with tens of thousands of customers in the state without power on Thursday night, and more rain on the way for the Gippsland region on Friday.

While the forecast 10-20mm fall will be nothing like the 270ml deluge that the region has endured, it will affect catchments that are already flooding.

A man was found dead in his submerged car at the coastal Gippsland town of Woodside on Thursday afternoon.

15 flood warnings are in place across Victoria after a man was found dead in floodwaters in Gippsland. #9Today pic.twitter.com/XJOuufXrrY

About 60km north, evacuation warnings remained in place as floodwaters continued to rise.

A major flood warning was also issued on Thursday night for the Thomson River, with major flooding possible for Sale on Friday afternoon.

There are other active major flood warnings across the West Gippsland catchment including the Avon, Macalister and Latrobe rivers.

Sydney also shivered through its coldest day in 25 years on Thursday as the cold front affected much of the eastern seaboard.

The cold air mass that blew in from Antarctica, sent temperatures plummeting and caused widespread snowfalls all the way up to the Queensland border.

300 nurses and midwives strike in NSW.

More than 300 nurses and midwives across NSW have walked off the job to protest unsafe work conditions and what they say is a paltry pay rise offer.

In Sydney, more than 100 nurses and midwives have left Liverpool Hospital after voting to stop work for four hours on Thursday afternoon.

Workers are also striking at nearby Campbelltown Hospital, with around 60 staff members walking off the job for two hours.

Liverpool Hospital nurses and midwives have walked out for 4 hours, calling for ratios and safe staffing! pic.twitter.com/Aa1iFHW2qv

Around 150 nurses and midwives in Lismore have taken strike action, and won't return to work until 7am on Friday.

The NSW Nurses and Midwives Association and the Health Services Union both face fines over the strikes, after the NSW Industrial Relations Commission last week ruled they could not undertake lawful industrial action until at least June 30.

The absence of staff-to-patient ratios, excessive workloads and an inordinate amounts of overtime have pushed many nurses and midwives to the brink of walking away from the profession, Mr Holmes said. Adding to the frustration is the feeling their concerns are falling on deaf ears and the "insulting" 1.04 per cent annual pay rise offer made by the government.

Ben Roberts-Smith will continue giving evidence at his landmark defamation action against media outlets over claims he committed war crimes in Afghanistan, after breaking down in the witness box on Thursday afternoon.

Mr Roberts-Smith, 42, is in the witness box at the Federal Court trial launched against the publishers of the Sydney Morning Herald, The Age and The Canberra Times in the Federal Court that he says defamed him in media reports from 2018 related to his military service in Afghanistan.

The war hero claims the reports depict him as a criminal who breached the moral and legal rules of military engagement. He is also suing over reports alleging he assaulted a woman in a Canberra hotel room.

Ben Roberts-Smith finishes the day in tears as he detailed the battle which saw him awarded the Victoria Cross. @9NewsSyd https://t.co/VbozLcn9MB

He will resume his testimony on Friday after breaking down in the witness box late on Thursday afternoon while recounting details of the SAS action at the 2010 Battle of Tizak, for which he was awarded the Victoria Cross, Australia's highest military honour.

Mr Roberts-Smith, the trial's first witness, has described claims by the respondents critical of his war service as devastating and heartbreaking, saying he had spent his life fighting for his country and did everything he could to act on the field of battle with honour.

The judge-alone trial, estimated to run for 10 weeks, will hear testimonial evidence from 21 current and former SAS members as well as several Afghan villagers, it has heard.

Tiny Tasmanian town takes out award for best drinking water in the world.

Tap water from a tiny regional town in Tasmania, which was declared undrinkable three years ago, is now considered the world's best.

The global event judged water from five continents, 14 countries and 19 US states.

It is the first time water from Australia has won the award in the event's 31-year history.

Rossarden in the state's northern midlands is home to about 42 people.

- The New Zealand government has extended a ban on Victorians using quarantine-free travel until Thursday June 17.

- A pink commemorative rose created in honour of the Queen's late husband Prince Philip has been released on what would have been his 100th birthday.

- A 28-year-old man who was caught on camera slapping French President Emmanuel Macron has been sentenced to 18 months in jail, but will only serve four.