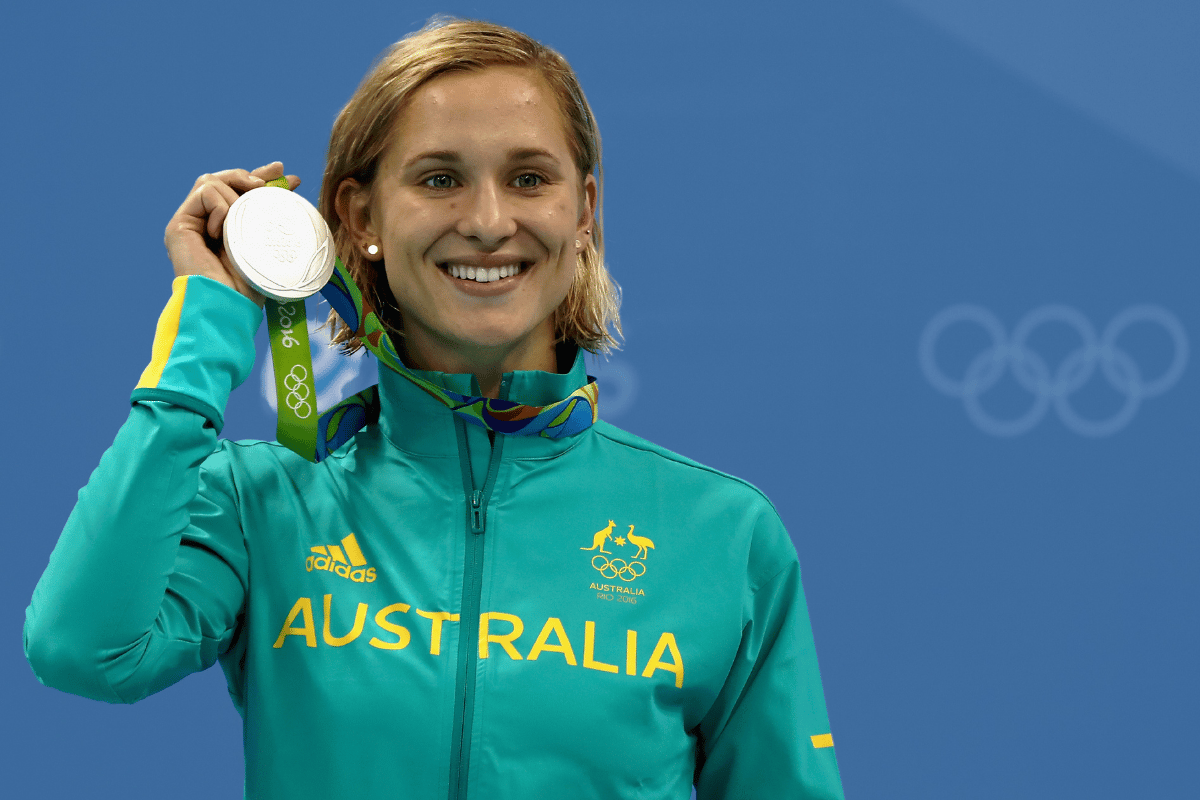 This post deals with suicide and sexual abuse and may be triggering for some readers.

Five years ago, Australia watched on as Maddie Groves took home two Olympic medals at the 2016 Rio Olympics. Years before, she had been sexually molested as a teenager by a man who still works in swimming today.

In an interview with ABC's 7:30 report on Wednesday, the 26-year-old continued to shine a light on the toxic culture of swimming, opening up about the abuse she experienced from age 13 to 18.

"When I was underage, on multiple occasions I was actually molested by an adult male," she told the ABC.

"At the time I didn’t feel like there was anyone I could tell about that. And there’s no-one in swimming that I would trust disclosing that to now, either."

Groves, who doesn't want to pursue criminal charges, chose not to name the alleged perpetrator but shared he still works in the sport.

"I don’t think I really want to report it to police. It’s obviously a huge process emotionally, and it takes such a long time… and then it doesn’t necessarily end up working out that well.

"I’ve had a couple of other friends and people that I know in swimming that have been sexually abused and assaulted and they’ve been through that process. It ends up being really disappointing… and things don’t really seem to change. It’s sort of swept under the rug."

Groves said she decided to speak about the abuse after watching the ABC's investigation into former elite swimming coach, John Wright, earlier this year.

Wright was accused of sexually abusing a number of teenage boys he trained at Queensland pools in the 1980s and 1990, including swimmer Shane Lewis, who died unexpectedly in February this year.

The coroner is yet to determine Lewis' cause of death, but according to the ABC, his family believes it was suicide.

"He said he had been sexually assaulted as a minor over a year or more. When he was 11,12,13," Lewis' mother, Sue, told the publication.

In 2016, Lewis complained to Swimming Australia about Wright but his claims were not investigated at the time.

Olympian Lisa Curry, who swam with Lewis as teenagers, told the ABC she's angry Swimming Australia did not do more to investigate.

"It’s about time that people stopped hurting kids. We’ve got to stop hurting these children that grow up with this pain and this trauma and this shame," she said.

Wright has since been arrested and taken into custody. He faces nine charges of indecent dealing with a child and one count of common assault.

Groves' bombshell tweet and withdrawal from the Tokyo Olympic trials.

This isn't the first time Groves has called out the toxic culture of swimming in Australia.

Back in June, she tweeted that she wouldn't be competing in trials for the Tokyo Olympic Games "as a lesson to misogynistic perverts and their bootlickers".

"You can no longer exploit young women and girls, body shame or medically gaslight them and then expect them to represent you so you can earn your annual bonus. Time’s UP," she wrote alongside a screenshot of an Instagram post announcing her withdrawal.

Let this be a lesson to all misogynistic perverts in sport and their boot lickers - You can no longer exploit young women and girls, body shame or medically gaslight them and then expect them to represent you so you can earn your annual bonus. Time’s UP https://t.co/XMQCRPjNzK

Speaking to the ABC, Groves said she received an "overwhelmingly positive and supportive response" to her tweet, including from those who shared similar experiences.

"It was athletes, staff, coaches from Australia and abroad, both swimmers and non-swimmers that had contacted me, expressing that they understood what I was talking about and often shared some really upsetting stories with me about their experiences in swimming.

"A lot of stories from recent years about people feeling fat-shamed and struggling with eating disorders and body image issues, but also some really awful stories about sexual assault and abuse. And a few stories, talking about being raped as well. And some really serious incidents that none of these people felt like they were looked after, when they had those things happen to them."

During the interview, Groves also accused two of her former coaches of misconduct.

The first was former head coach of the Western Australia Institute of Sport (WAIS), Michael Palfrey, who coached Groves from age 12 to 15.

Groves claimed Palfrey would require her and other girls to weigh themselves on the pool deck, often when wet, which saw Groves "hide in the bathrooms" or "in another part of the pool area so that I wouldn't have to do it or they wouldn't be able to find me".

She also spoke of body shaming and said that Palfrey would control her diet.

"I remember very clearly when I was 12… I was complimented for losing weight, which I distinctly remember thinking was strange, because I was 12."

"It almost felt like at times you were chastised for going through puberty and gaining weight and growing boobs and growing a bum and hips. That was seen as you failing… because you were gaining weight when you were just developing in a normal way," she shared.

"I specifically remember on a training camp in New Zealand, I would have been 13 years old, and we weren’t allowed to go into the dining room and eat without our coach being there to witness that we were eating the correct meals."

"The manhandling was a very common practice at my swimming club growing up," she said.

"It just was this thing that happened by the coach where it seems like when they got very excited, they would just grab you, grab your shoulder, grab your neck, grab your arms and sort of like, slap you and shake you in a way that was sort of done as like, a playful thing."

"But when you're in your togs and you're an underage girl and you have an adult male grabbing at your body and sort of slapping you ... it really breaks down the barriers and boundaries of what inappropriate conduct is."

Swimming Australia told the ABC that allegations against Palfrey have been referred to Sport Integrity Australia.

Groves also accused former Australian national youth coach Glenn Beringen, who coached her at the Oceania Swimming Championships in Samoa, of "blatantly staring at my breasts" and touching her inappropriately.

"As a 15-year-old, I was sent to a foreign country basically alone with no real support network, having this strange man be the one that was going to look after me," she recalled.

"There was seemingly no interest in speaking to me when I was clothed ... but as soon as I was in my togs, it was the time when this person wanted to take me away from the group and have these intimate conversations with me and stand very close to me, inside my personal space and really standing over me and staring and leering at me."

After the trip to Samoa, Groves decided to take a break from swimming in 2011 and was "left feeling suicidal".

"I was left feeling like that because my whole world was swimming... and I was made to feel like every decision I made whether I was at the pool or not was going to have a bearing on whether I was ever going to be successful at life."

A year later, she returned to the sport for the chance to compete at the Olympics and came to terms with the fact that "the pressure, the body shaming and the misogyny were just sort of things I have to accept if I wanted to be an Australian Olympian."

In 2017, Groves made a complaint about Beringen as part of an independent review by the Australian Swimmers Association into the FINA World Championships campaign in Hungary.

Beringen told the ABC that the allegations were "completely untrue" and that he had "fully co-operated with an independent investigation into these allegations and they were found to be without foundation".

Swimming Australia told the ABC there was a review into Groves' claims against Beringen and Groves was asked to provide further information to an investigator, but she declined to do so.

"The investigator ultimately determined that the complaints were unsubstantiated," it told the ABC.

Earlier this year, Swimming Australia announced they decided not to renew Beringen's contract.

You can watch the full interview with Maddie Groves on ABC iview.