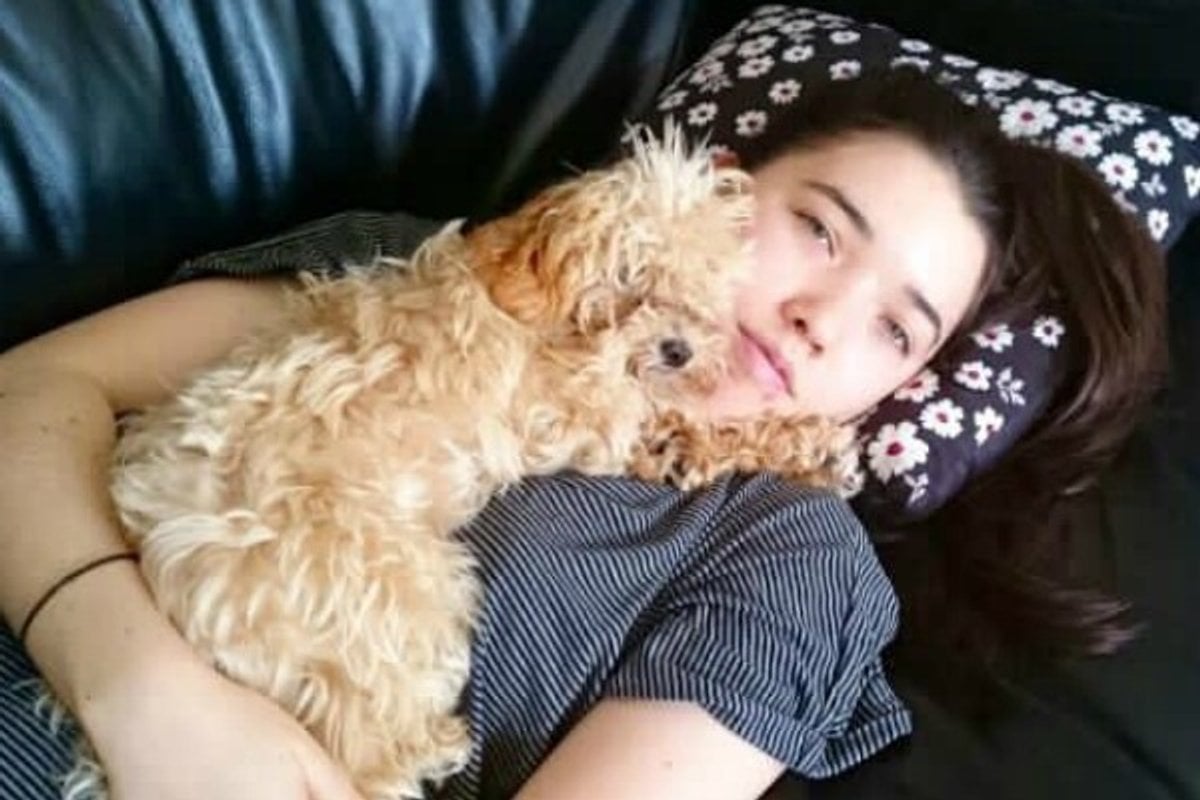 Alexandra Meek has been sick for six years.

Her main symptom is a never-ending fatigue, and a brain fog that at its worst can leave her struggling to hold a conversation, watch TV, or even just stand upright in the kitchen.

"I just felt like I was being tortured 24/7 because I just couldn't think because my brain was just a mess. I went from being this smart university student to someone who struggled to read text messages from friends," the now 28-year-old told Mamamia.

Then there is the pain. It isn't a headache, but it is in her head. And in those early years, it never wavered. Sometimes she would find herself sitting in a room, but it was like she wasn't there.

"I was like a zombie... and my brain was in the next room," she explained.

It took two years and countless failed doctor diagnoses for Alex to get an answer. She had Lyme disease, a bacterial infection generally transmitted by ticks from a bite she doesn't even remember getting.

In 2014, at the age of 22, the University of Sydney student had just finished up a Bachelor of Commerce and had landed herself a graduate job as an investment banking analyst that was due to start the following year.

She was in the process of deciding whether to go travelling in the meantime, or do her honours' year, when she got tonsillitis and then glandular fever.

But she never seemed to recover. Weeks of not being able to leave her bed turned into months. 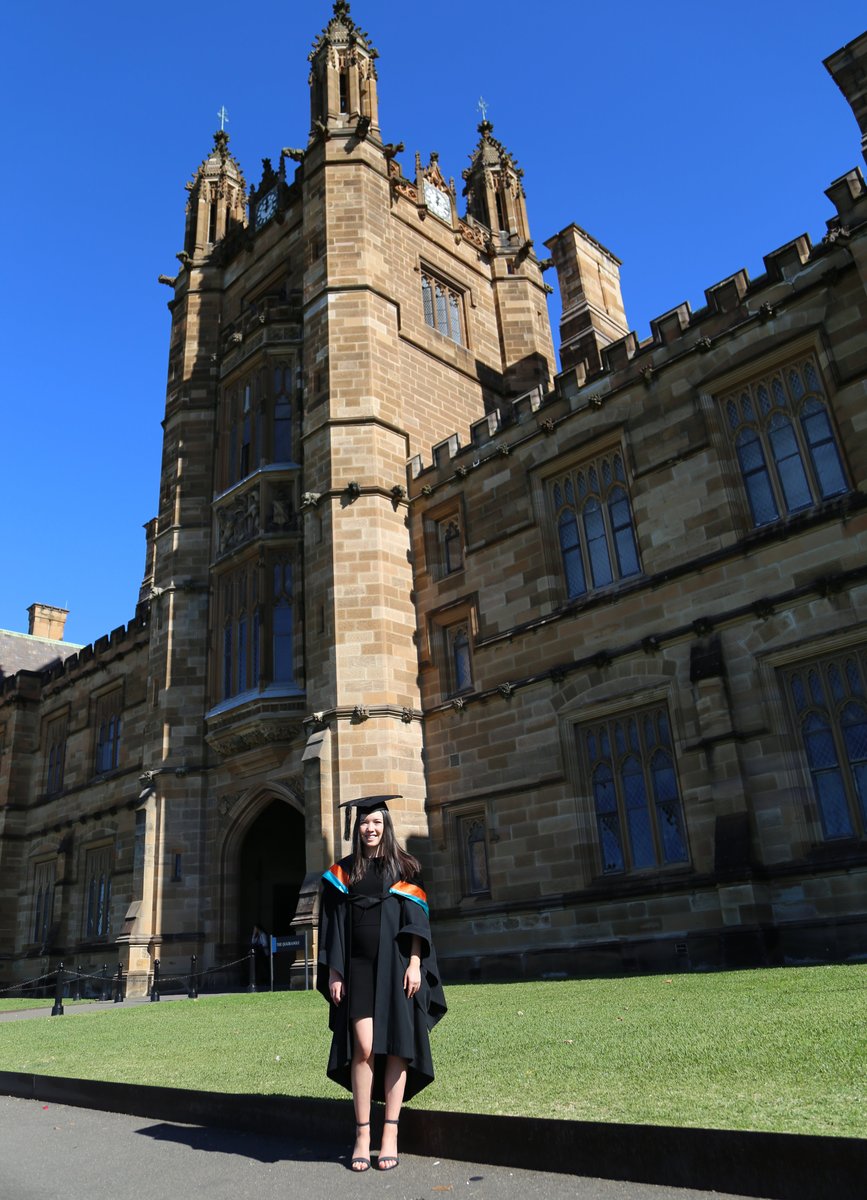 "I was initially diagnosed with Chronic Fatigue Syndrome (CFS) and told there was nothing that could be done. I remember another doctor said, 'you're severely depressed' and tried to tell me just to go out more and maybe 'if I got a boyfriend I would start feeling better'. I was so sick, I could barely sit in the appointment. It took all my energy just to get there. I was trying to say I can't go out, even if I want too," said Alex.

The crushing fatigue continued for years.

"It just kept lingering... when something catastrophic happens overnight I feel like you get more of a reaction, but because it just kept going and I just wasn't getting better, everyone had more time to adjust. And because my blood tests kept coming back normal, they start to look at you like you're a bit of a hypochondriac."

It was a holistic doctor that ended up diagnosing Alex with Lyme disease, because as she came to realise, the diagnosis is a controversial one in Australia, and many in the medical world refuse to entertain it as an option.

As NSW Health guidelines state: "Although locally acquired Lyme disease cannot be ruled out, there is little evidence that it occurs in Australia."

But Alex had been to both Boston in 2013 and China in 2012 and 2013, and Lyme disease is the most frequently reported tick-borne illness in both the United States and China.

Read More: Tanya lives with Lyme Disease. It's one of the few cases Australian doctors will believe. 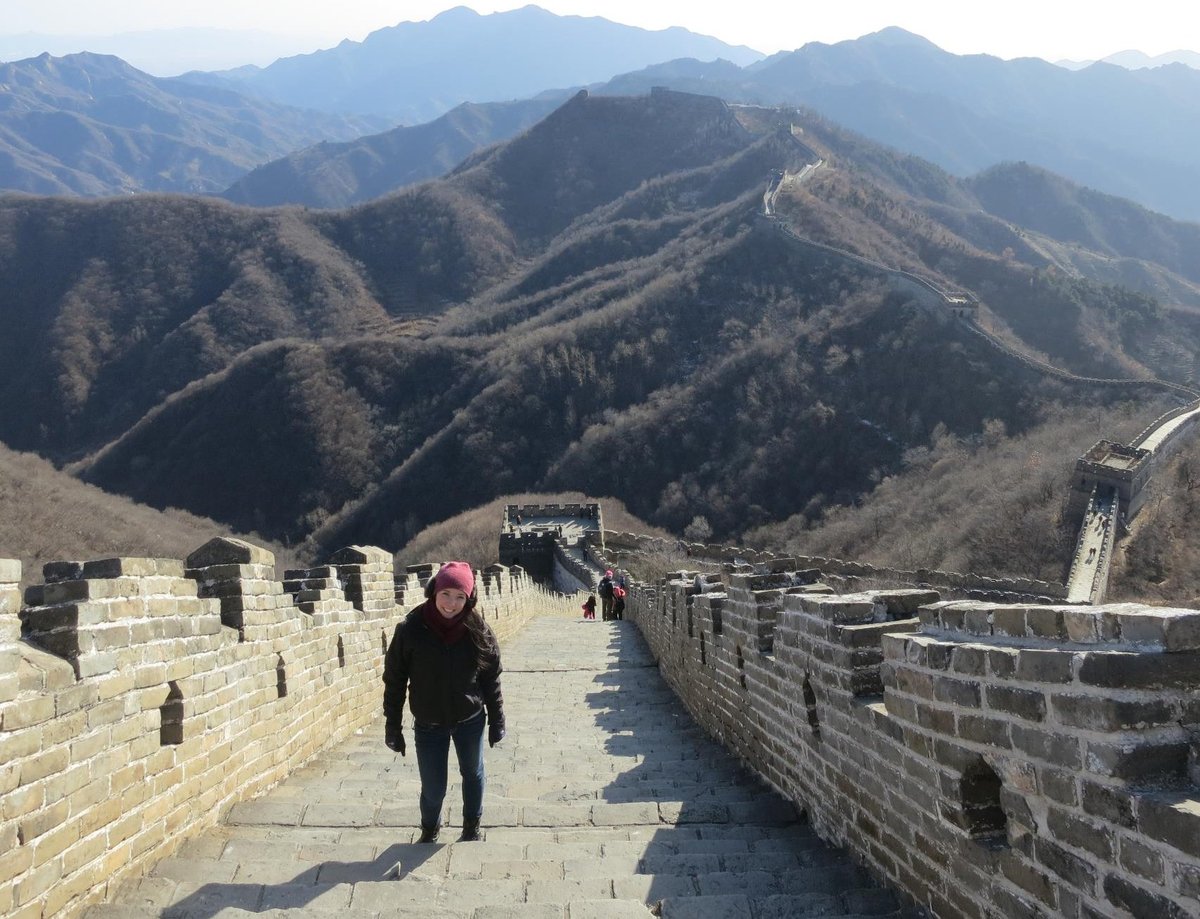 Alex travelled to both America and China in the years before her diagnosis, but she has no idea when she was bitten. Image: Supplied.

As she joined local Lyme disease groups on Facebook, she realised that many of the people in there had the exact same symptoms as her, and had never been overseas.

"So I could have also got it in my own backyard. It is a contentious, political issue [in Australia] which I admit, I have had to ignore to focus on my own healing, but the mistreatment of Lyme sufferers in Australia has been likened to the treatment of AIDS patients in the 80s," she told Mamamia.

Since her diagnosis four years ago, Alex estimates she has spent more than $100,000 on treatment, including a more than $40,000 trip to Malaysia for hyperthermia treatment which has given her the greatest relief from her symptoms so far.

"I take over 50 tablets a day, have IV therapy three times a week, own an infrared sauna, and have undergone countless complementary therapies such as acupuncture, osteopathy, kinesiology, lymph drainage massage and more," said Alex.

"I am one of the lucky ones. My parents have been able to pay for me to get treatment. It's really expensive, and I am just greatful we can afford it, because that's not the reality for a lot of Lyme sufferers." 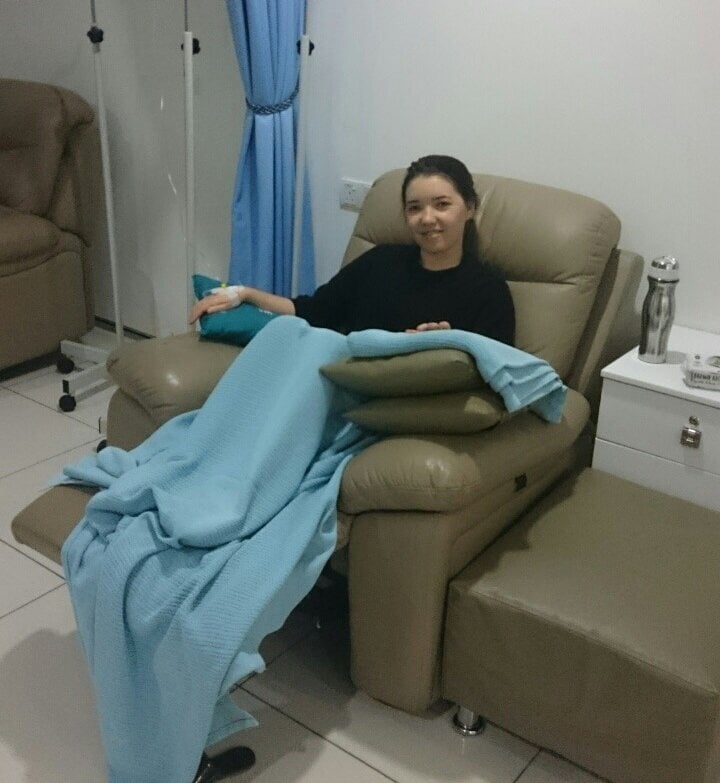 Alex estimates she has spent more than $100,000 on treatments over the past six years. Image: Supplied.

Alex is slowly getting better.

At the start of this year she was put on a new medication, and it's allowed her to gain back some strength.

"This year has been a really good year because of this new drug. Most of the time if my friends have something on I can generally go, I just need a bit of warning to be able to prepare for it. But I can go to weddings and concerts and things," she told Mamamia.

For six years, Alex has mostly sat on the sidelines and watched her friends forge careers, get married, travel the world and go to festivals. She has spent the large majority of her twenties at home.

"One tiny little tick bite has completely upended the majority of my 20s, it is almost unbelievable that a tiny bug bite that I don't even remember has caused so much pain and suffering," she said.

Even though she's learnt to look at the years gained thanks to treatment rather than the ones she's lost, sometimes she finds herself tripped up.

"Friends will talk about spontaneous travel plans, and I'll realise that still isn't possible for me and it catches me off guard. It can be upsetting," she said. "I am still a long way from being normal."

But this year of relative strength has allowed Alex to finally start working. In September 2020 she launched Maruko Beauty, a platform that sources and sells the highest quality natural beauty brands from around the world. It's giving her purpose and is gaining a following, fast.

Sometimes Alex is thankful for what she's been through, because instead of climbing the corporate ladder of investment banking she's pouring her passion for natural and organic beauty into her very own business that she can make work around her energy levels.

"I have really changed as a person and I have different values and priorities. I feel kind of free sometimes when I am with friends because I see that their identities are so tied to their achievements. But in the end that's not going to make you happy. You have to be happy with who you are in yourself," she told Mamamia.

She also has hope of emerging from the daily sufferings of Lyme one day.

"I can get better. I have met people who are almost fully recovered. I will always have to prioritise my health, and I won't be 100 per cent, but I can get pretty close. I met a girl who was bedbound and in a wheelchair and she's in uni studying nursing now. Life can be normal again," she told Mamamia.