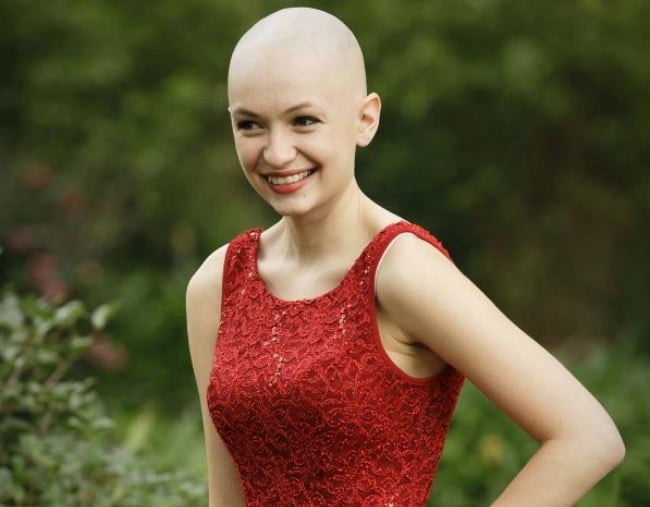 From the time I was six, my hairline marched slowly up the back of my scalp.

Because there’s no cure for alopecia, I was thrown into a state of helplessness, where everything couldn’t be fixed by a sticker and lollypop.

When you have alopecia, your hair becomes the persecuted minority, attacked by the soldiers of your immune system. The guerrilla militants of Alopecia Areata create patches of hair loss on the scalp; an organised attack by Alopecia Totalis wipes out the entire population of hair on the head. Then it’s up to the secret service agents of Alopecia Universalis to pick off the remaining hairs on the body, including eyebrows and eyelashes.

My hair started falling out in chunks when I was 11. I’d find it on my pillow, on the bathroom floor and on my clothes—it was everywhere except for on my head. Soon, I became painfully aware I shared my baldness with witches in fairy tales and old men, and I felt being different was something to be ashamed of.

I didn’t just lose my hair, I lost my confidence, sense of self-worth and my feeling of belonging.

High school ushered in a new age of secrecy. My beautiful wig granted me the normalcy I craved and I told no one about my condition. Maybe if I ignored what made me different for long enough, it would just go away. I was wrong.

An intense sadness infiltrated my system. It shut me down and rebooted me and the world became darker. I became convinced that the way to restore my damaged self-esteem was to trade in all of my ‘abnormalities’ for things which were acceptably ‘normal’. In thinking like that, the parts of me that were too dark, too imperfect and too different were kept out of the light, unable to be loved and accepted by anyone.

Listen: Rebecca Sparrow and Robin Bailey talk about the magic of letting the need so many of us feel to always be liked, on The Well. Post continues after audio.

It was a long process, but over time I realised self-worth wasn’t something that would be given to me, it was something I had to give myself. I didn’t owe the world anything—not prettiness, not perfection, not stoicism—the only thing I owed was my authenticity. Being me was enough. What I’ve learnt from my condition is that beauty isn’t so much about what you look like, it’s about who you are.

Looking back, my journey was made so much easier by my wig. It freed me from the ‘bald girl’ label that I’d acquired in primary school and I didn’t have to endure any stares, comments and pitying looks. Now, I use my wigs as a form of self-expression. I can change my appearance based on my mood and it’s my way of showing that although alopecia is a part of me, it’s not the whole me.

The most amazing thing happens every time I share my story; someone always comes up to me and says, ‘I thought it was just me who struggled with these things.’ I’ve come to the conclusion that I’m not as different as I originally thought. My struggles have a universality to them.

What makes me different is also what makes me strong enough to face these things and I love alopecia for giving me that.

Stefanie Hodgson is available for speaking enquiries. Contact her at [email protected]